At last I’ve hauled my Ming fantasy fleet into the water, ready for some G&G action. The attentive among you will recall (obviously) the sensational exposé in these pages of the secret report by Don Marco da Pattaya (at that time Acting Viceroy of Malacca) to the Portuguese high command at Sagres, reporting on Chinese moves to rebuild their fleet on novel, fantastic lines. It seems the Fleet is now ready for action ...

An-Te Hai, the Court Eunuch punished by being appointed Inspector-General of the Tribute Bearing Fleet (Captain-General of the Minor Southern Lands) has been ordered to sea to escort a most important convoy past that notorious nest of pirates, the Knights of St Michael of Singapore.

This game will have only about 160 points per side while I re-familiarise myself with the G&G rules and work out how to handle the novel characteristics of the Ming vessels.

Here’s the situation: the Ming squadron has to enter at the short table-end at L and exit at R. Any other exits assume the offending vessel runs aground and is lost. The two junks are laden with luxuries for the Imperial court and the loss of either would be a tragedy.

The pirates (Knights if you like) are based in their lair between the two headlands and cannot put to sea until their first activation roll includes a ‘6’. They have been caught by surprise by this bold move by An-te Hai to sail right past their front door.

The wind is blowing diagonally from the far left to the near right corner of the table, and won’t shift (it’s an early monsoon wind). The tabletop is 44x72”. The photo shows the tabletop with all ships in posed positions prior to the kick-off.

The Ming convoy sailed on in two columns, the merchants in the lee column and the covering force in the weather column. This next photo shows the situation after about four turns. Ginger Jar leads the Hainan Trader in the tricky turn required to get past the Surprize! Rocks (the ! is on the original charts). The two submarine rams have fallen slightly behind due to their inherently erratic propulsion, and the Zuhong Liu has submerged (which won’t affect its speed).

The pirates were able to get out of port on the second move. The two galleys seem to be splitting up to take on one merchant each, no doubt hope of plunder has Trumped tactical wisdom. Sad. The galleass is switching from sails to sweeps and appears to be getting ready to run interference against the submersibles.

Both squadrons were determined to come to grips, and so only a few turns later it was an all-in melee. The next photo below is an update at the end of turn 8 I think, but that includes two zero-move turnovers, one for each side (first activation roll comprised 100% fails). 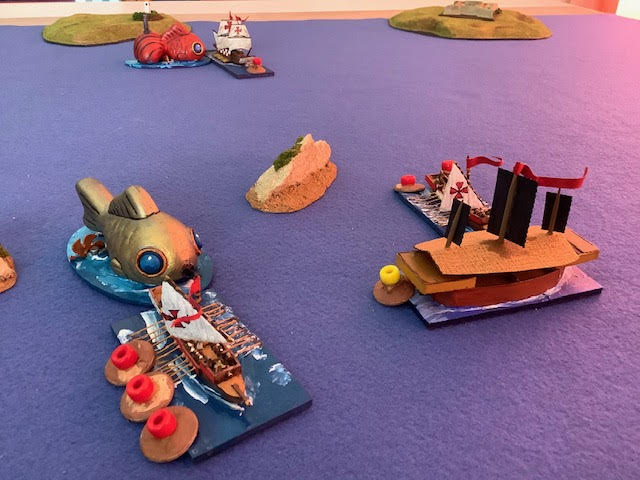 In the background the galeass San Miguel has been rammed - twice - by the Zuhong Liyu (it reversed and came in again after the first ram attack caused no damage). It has now inflicted 1 damage on the galeass as shown by the red marker. The Zuhong approached submerged and only popped up to ram, giving the San Miguel no opportunity to shoot. Then, when it did shoot, it totally missed at point blank range.

In the foreground the galley Corona has boarded and captured the Ginger Jar. The junk put up a fierce resistance, damaging the galley with its cannon as it came up, and winning a round of the boarding action too, but in the end it succumbed (yellow marker).

The Jin Liyu, staying on the surface the whole time, rammed the galley Cervesa, and with help from the cannon of the Hainan Trader, has sunk it (3 red markers). The Hainan Trader itself slipped past the galley and is now out-of-view to the R and nearly off the table.

Only one more Turn later and it was all over. Jin Liyu turned and rammed the galley Corona, already seriously damaged, and sent it straight to the bottom. 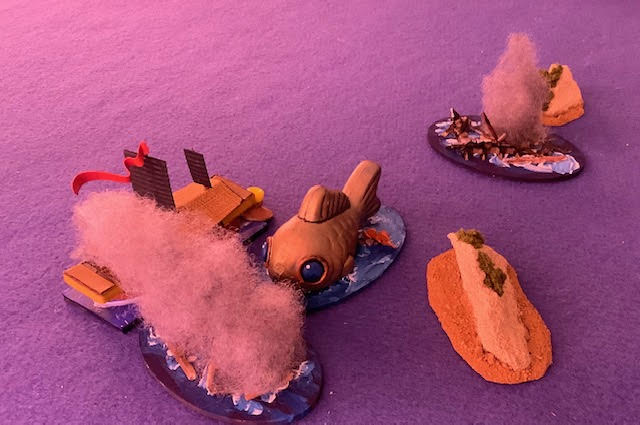 There was no prize crew about the Ginger Jar so the junk crew will be able to recapture their ship and get on with their voyage. And the Zuhong Liyu, having survived a half hearted broadside from the galeass, will be able to submerge and evade further damage.

So An-te Hai has won his first naval action. The Chinese squadron suffered 1 merchant junk temporarily captured (the manpower losses in the boarding action can be made good by the prisoners marooned on her deck when their galley was sunk) plus a single shooting hit on the Zuhong Liyu. The Knights lost two galleys sunk.

The Jianjing Emperor has expressed his satisfaction, and ordered An-te Hai to next extirpate the Southern Barbarians (Portuguese) from their base on the Birds Nest islands.


In accordance with Imperial orders, An-te Hai assembled a force to recapture the islands, the only source of a type of edible birdnest particularly favoured by the Imperial concubines. Four years ago (as I reported) the Portuguese led by Don Marco da Pattaya captured the islands from their traditional overlords, a shadowy cabal of Hakka pirates and Guangzhou merchants, and promptly raised prices sky high. It’s time to restore the correct order of things under Heaven.

The plan has been leaked to the Southern Barbarians however, and a defending force is in the offing, comprising an improbable alliance ... and commanded by Don Marco himself, no less.

The merchant junks contain convicts and military conscripts fated to be the garrison of the recaptured islands. It’s understood that if at least one junk can disgorge it’s load at the jetty, the troops, tho unenthusiastic, will overwhelm the few Portuguese defenders.

The wind is coming straight along the table from R to L, and (as usual on my tabletops) will not change during the game. 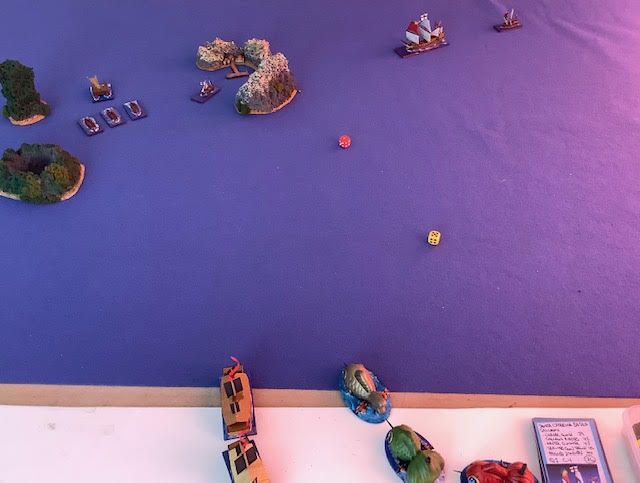 The first photo shows the opening positions of the game. The Portuguese and their allies are already on the table.  At R the Sa Caterina leads the Sa Barbara. In harbour the freebooters and the Moscato get ready for action.

The Ming squadron is shown at the points where they will sail on. All sailing vessels on both sides are under shortened sail as the games starts. An-Te Hai gets to move first.

And the next photo below shows what had happened by the end of a Turn 4. The Sa Caterina, Don Marco strutting on the quarterdeck in his finest armour, has been rammed bow-on by the Jin Liyu, and suffered two hits, tho the chaser guns hit the Jin Liyu as it came in. The crew have partially repaired the damage so the galleon now shows only 1 red hit marker. This has been at the cost of shooting or boarding the Chinese ship. The Sa Barbara, at extreme R, has shot at the Zuhong Liyu as the two sailed past, causing 1 hit. 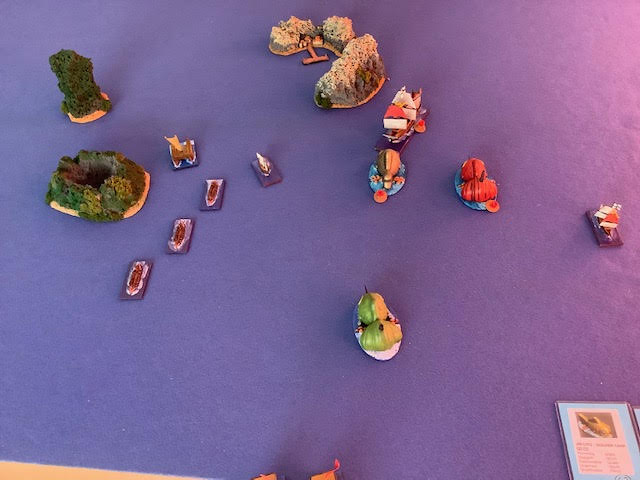 To the L, the Moscato and the freebooters canoes are slowly come out of the port. The Chinese merchant junks have yet to make an appearance due to turnovers.

Tactically it seems Don Marco’s plan is to use his big Portuguese ships to take down the Ming submersibles, and leave the freebooters the task of dealing with the merchant junks. An-Te Hai seems happy with that. He believes his wonder weapons can cripple the Portuguese and then turn on the Primitives who, it seems to him and his entourage, have put to sea on tree trunks.

Turn 5 was full of action so I’ve inserted another photo. The Sa Caterina galleon was rammed again by the Jin Liyu (it backed off* and came in again) and by the Zuhong Liyu, and it has now sunk from too many holes below the waterline. At time of writing there is no news of the fate on Don Marco da Pattaya.

*I’m using the backing rule for galleys: 1xM straight back for 2 actions (see bottom of p20). Boats cannot do this, pity.

The Portuguese keep doing this in my games (!) - letting the enemy get too close instead of standing off and shooting them. It’s not as if the submersibles were submersed. 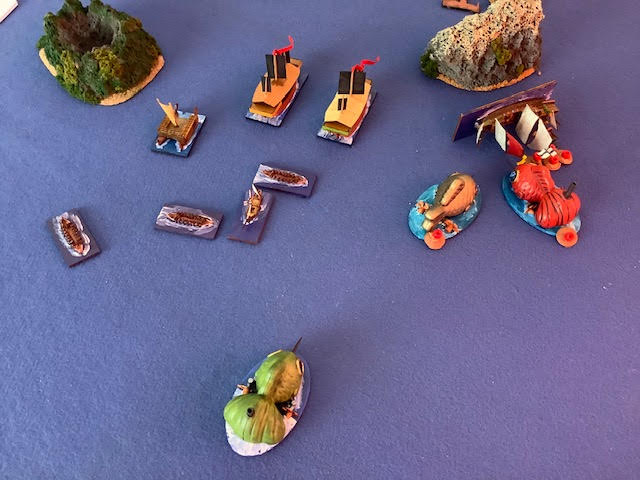 Elsewhere the Chinese merchant junks finally got their act together and  passed through the rest of the enemy fleet. They forgot to open fire as they did so.

The Portuguese response was ineffective. Moscato fired a full broadside at one of the junks but somehow caused no damage (won the firefight but the natural die roll was Odd). The freebooters were caught totally flat footed and are out of position, and (out of pic to the R) the Sa Barbara is stranded near the bottom table edge by turnover.

Three Turns later (end of Turn 8) I ended the game, because I had run out of time (need to collect Michael from school and go buy “trick or treat” lollies for school tomorrow). A pity as the end game could have been very intriguing. Here’s the end-of-game photo: 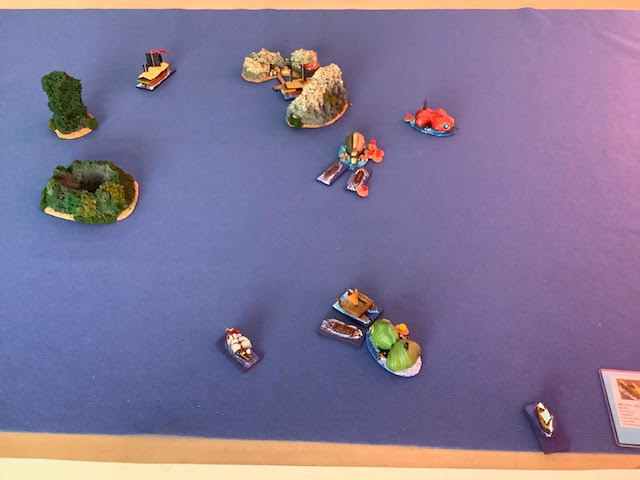 The Ming have recaptured the KhiNok islands as Ginger Jar has been berthed at the jetty for 2 Turns and her troops have debarked to overwhelm the scratch Portuguese garrison. So scenario-wise they have won.

But ... although the Portuguese have also lost their big galleon (a critical dent in their East-of-Goa capability) they have lost no other ships, but the Ming have lost two submersibles, Jin Liyu and Fecui Liyu, to boarding by the freebooters. Fecui Liyu (yellow marker) was captured but Jin Liyu, with An-Te Hai aboard, was sunk. So both commanders have fallen in the water. I’ll have to incorporate this detail into the ongoing G&G campaign. Also this could mean the Chinese technological secrets fall into Portuguese hands - if the freebooters don’t burn the Fecui Liyu after looting it.

Elsewhere the Sa Barbara and Moscato have had a terrible day for gunnery, usually they do a lot better esp the tiny Moscato. Zuhong Liyu, thé surviving submersible, ought to be able to cover the retreat of the merchant junks.

Losses and captures amount to 76 pts for the Portuguese and 124 pts for the Ming. The Ngati Porou will most likely head home now, canoes stuffed with Chinese loot, and the surviving two Portuguese ships aren’t strong enough to attempt a counterstroke by themselves.

Let’s call it a strategic win for the Ming Chinese, but a marginal tactical loss. And leave the mysterious fates of An-Te Hai and Don Marco da Pattaya for future episodes.