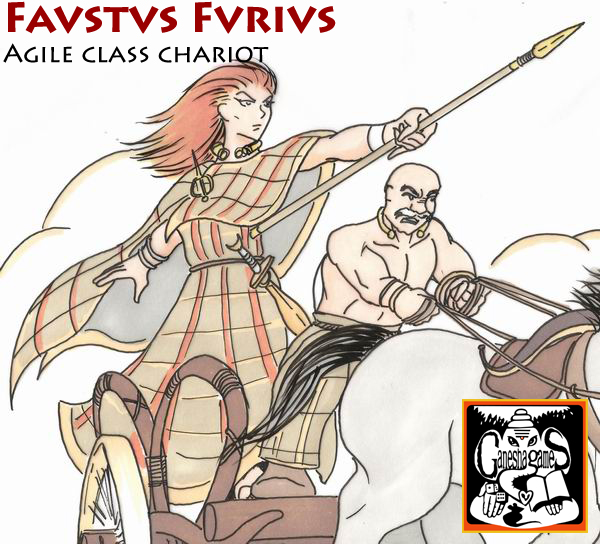 Faustus Furius is a scale agnostic racing game for chariots/vehicles of any period or culture. Due to spacial considerations, and compounded by my love of 6mm, I decided to build up my collection racing chariots in this fine is diminutive scale.

For a decent race, you'll need at least four chariots. There are seven balanced classes of chariot in the game, each of which have their own positive and negative attribute. For playtesting, I decided I needed to have two racers of each class to allow players the freedom to choose their preferred playing style.

Below are some pretty rough photographs of each of my little guys showing both their active and crashed forms. It is feasible to just mark a chariot with a crash marker in the game, but obviously a crashed chariot looks... well ... crashed.

Recent mania in my gaming circle for the new Osprey 'hard' sci-fi rules set, Horizon Wars, by Robey Jenkins got me enthused enough to paint up a few odd 6mm bits and pieces I had floating around to supplement my Samurai Robot Battle Royale European Empire Imperial Response Group.

I like having miniatures which can be used in multiple gaming systems and Horizon Wars is about the right operational scale for me, using little more than a handful of units in most games. As such, my existing SRBR human stuff actually converted directly over into a full sized force, large enough for all but the largest games.

Then I added more... 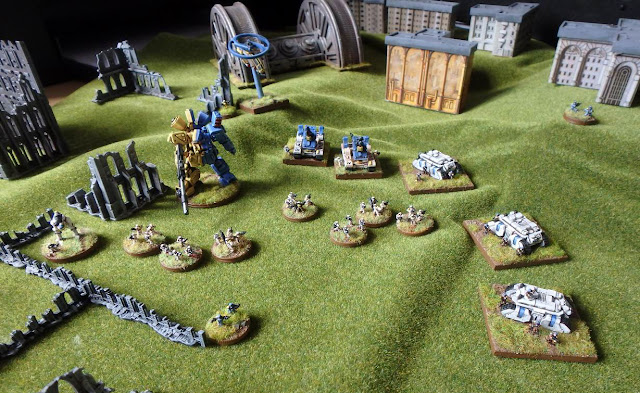 Seen here in the burned-out outskirts of Merkelburg, a complete European Empire battlegroup is ready for action. The battle group is formed around a heavy infantry company (CHQ and two platoons each of three sections) with support units in the form of a light fire support walker, two sections of recon Shadow Scouts and two Goliath artillery pieces. To these are added, air support, a mechanised infantry platoon (three sections) and a heavy Batavia class mech.

The heavy infantry (and shadow scouts), artillery and helicopter are all Dark Realm miniatures. The APCs are from Onslaught while the infantry piling out of them are from Defeat in Detail. The mech is from Heavy Gear Blitz. 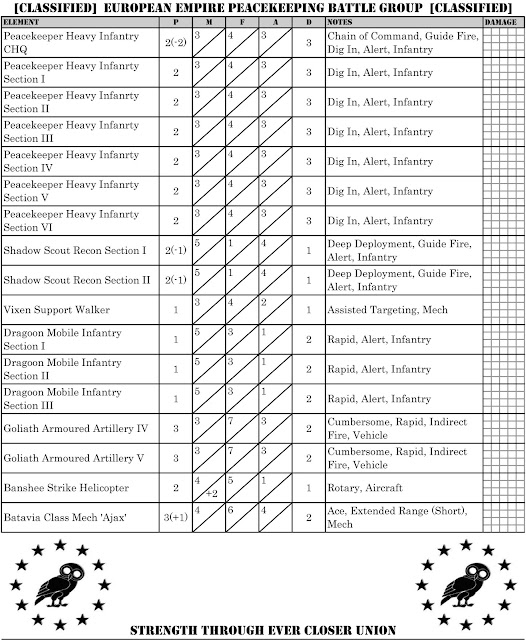 The battle group has a total 'presence' of 30, double what I would be expected to deploy in most games, but sufficient to provide me with a myriad of options to meet most scenarios with an even chance of success. He's hard to make out in the picture, but I even painted and based a downed pilot for the Banshee Strike Helicopter. In Horizon Wars, if aircraft get taken out, the player who captures/rescues the pilot gets extra victory points...

I haven't had many chances to play through the rules yet, but what I had played, I have enjoyed very much as a refreshing interlude between my more usual arrow and pike shenanigans. I'm looking forward to the next big clash which will likely be against those wily Neo-Soviets. 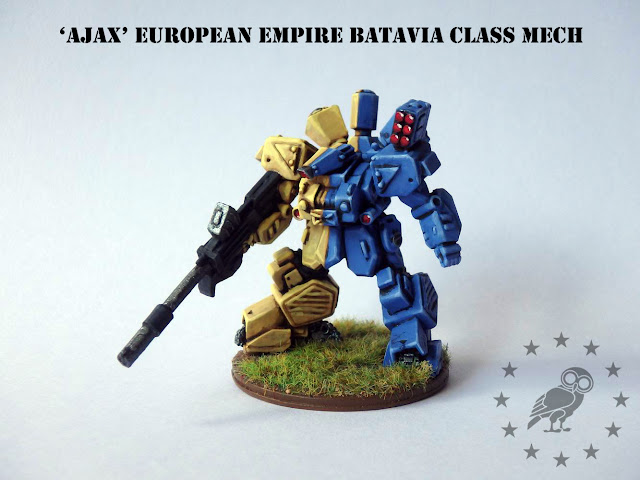 The Ajax is a bit of a centerpiece for the battlegroup and I'm quite pleased with how he turned out. As the rest of the force is colour-schemed white with blue and yellow details, I went with a strait blue and yellow scheme for the mech. It makes him stand out (as if being almost 10 times bigger than everything else didn't already do that), yet he still feel like part of the team. I haven't yet statted him up for Samurai Robot Battle Royale, but I will do so in due course. Based purely on bulk compared to I.R.N. Mech, I'd estimate he will come in around 400-450 points. 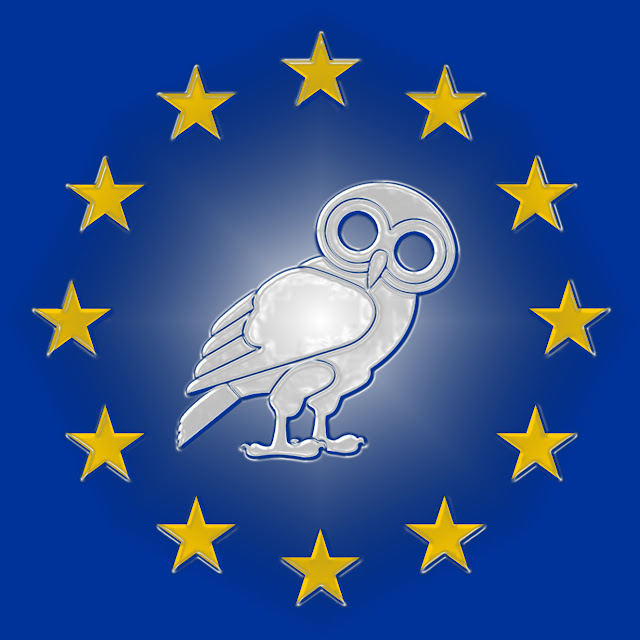 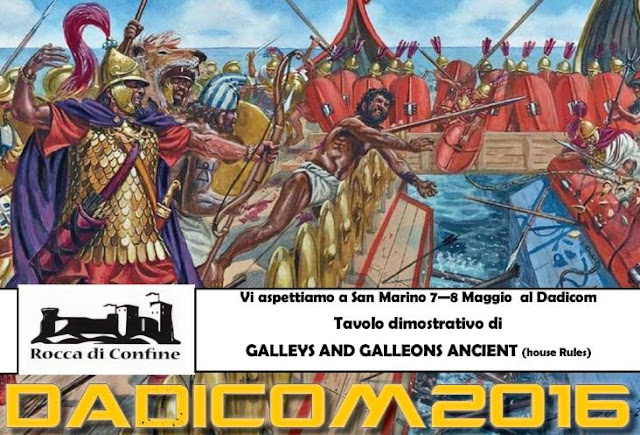 Earlier this month, Ganesha Games attended Dadicom in San Marino where they ran a trade table and a couple of games tables. One of the game tables was dedicated to an eye catching 15mm game of Galleys & Galleons: Ancients. I was not able to attend, but below are a few of the photos that came back from the event. I have no idea what house rules they employed, nor if there was a function to the crew/marine stands in the ships, but I think you'll agree it looked great! 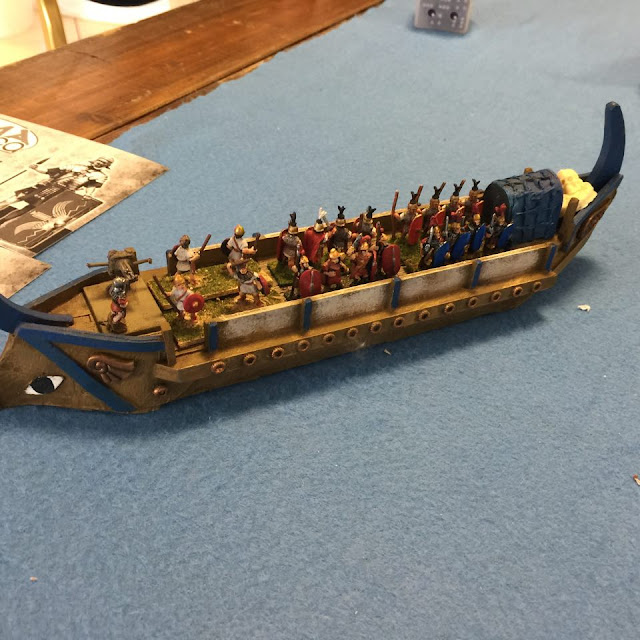 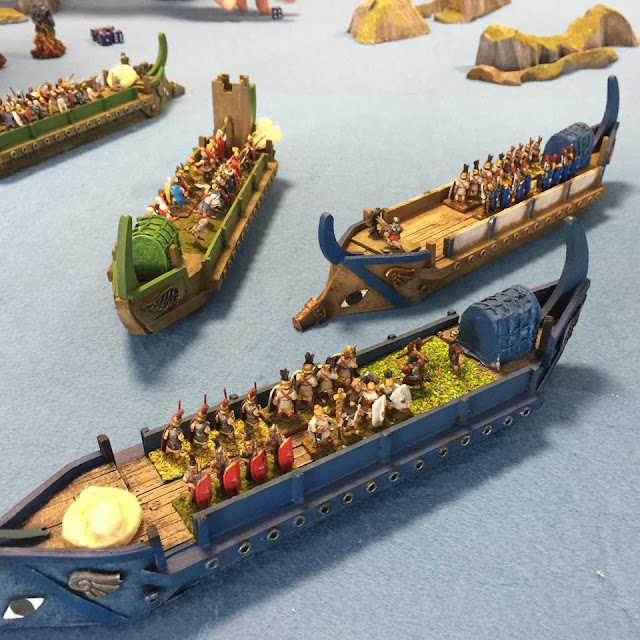 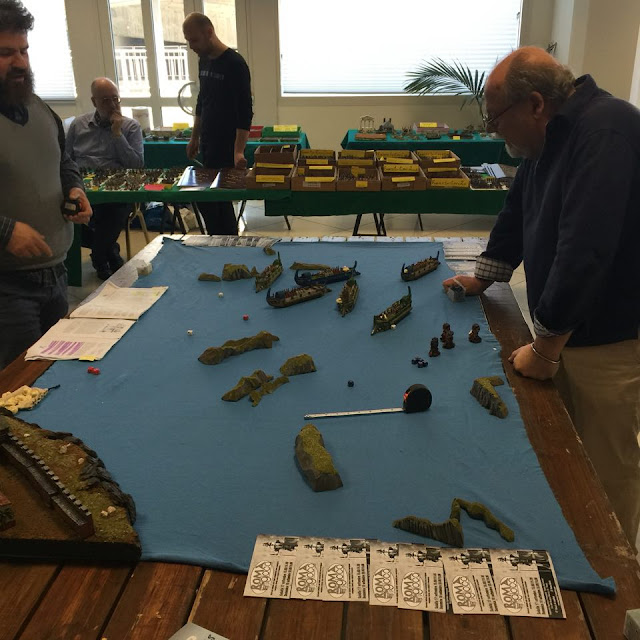 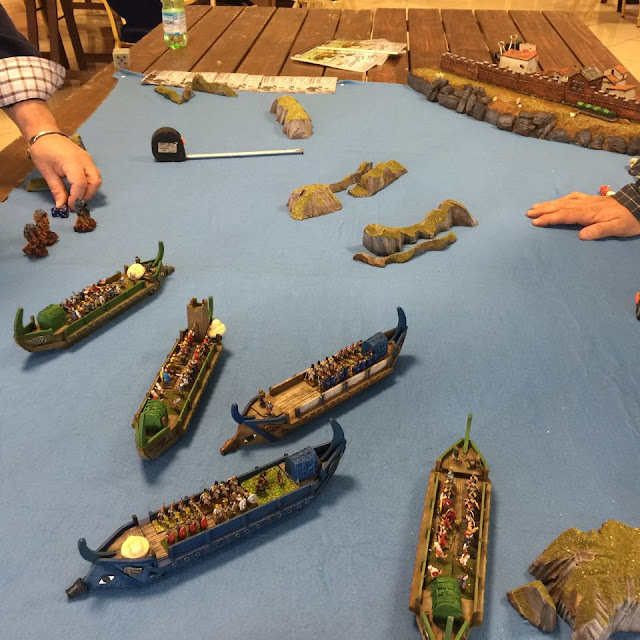 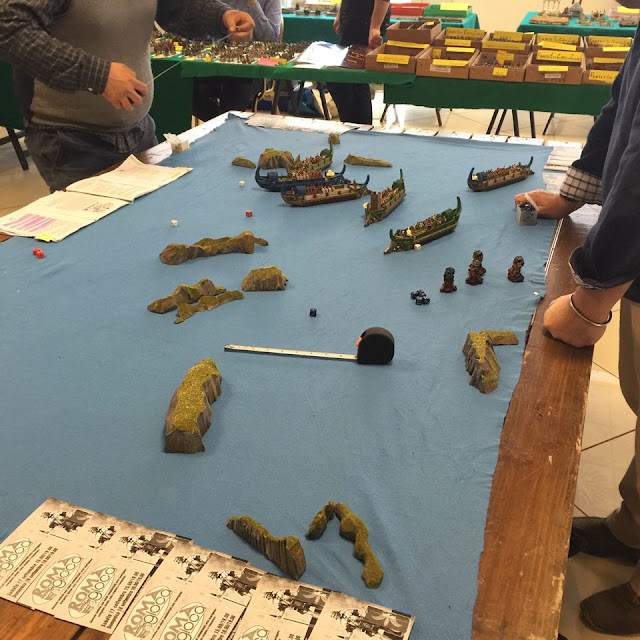 Something to live up to...

Alyssa Fadan is someone I have never met. I don't normally have much to say about people I have never met, but Alyssa has a wonderful Friendface account on which she collates all sorts of useful and inspiring information on history, military history and wargaming - recently she has been on a bit of a Roman bender building up armies for Boudicca's revolt against the Roman administration of southern Britain in AD 60/1. Watching the progress has been quite eye opening. However, getting to the point, she recently posted some snappy information to do with the favourite pastime of ancient Romans, the circus. In light of the forthcoming release of Faustus Furius, I repeat it below with permission and with a couple of minor changes.
The images are my contribution... none  are believed to show Diocles himself. 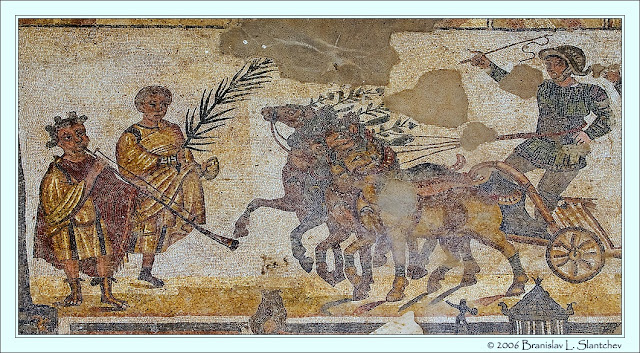 Gaius Appuleius Diocles was an ancient Hispano-Roman notable for racing chariots.His winnings reportedly totaled 35,863,120 sesterces, an amount which could provide a year's supply of grain to the entire city of Rome, or pay the Roman army at its height for a fifth of a year. Classics professor Peter Struck describes him as "the best paid athlete of all time". Adjusted for inflation as of 2015, his fortune was equivalent to somewhere between $100 and $800 million USD. 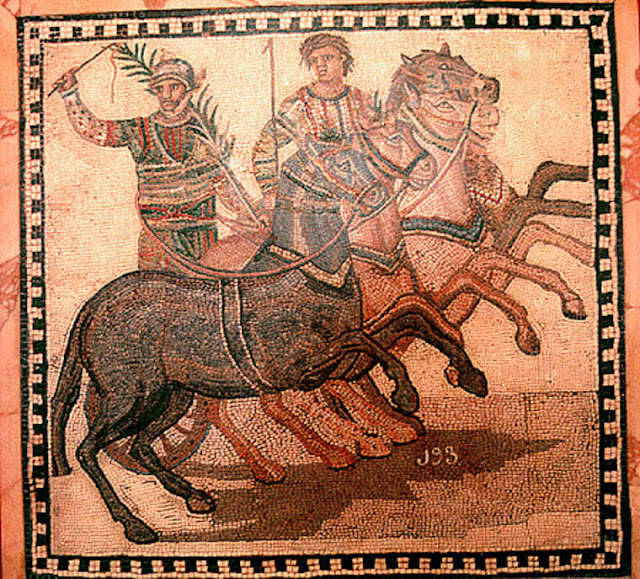 He most commonly raced four-horse chariots, and in most of his races he came from behind to win. Diocles is also notable for owning an extremely rare ducenarius, or a horse that had won at least 200 races. Records show that he won 1,462 out of the 4,257 four-horse races he competed in.

The following dedication, erected in AD 146 by Diocles (or his biggest fan) records his achievements. 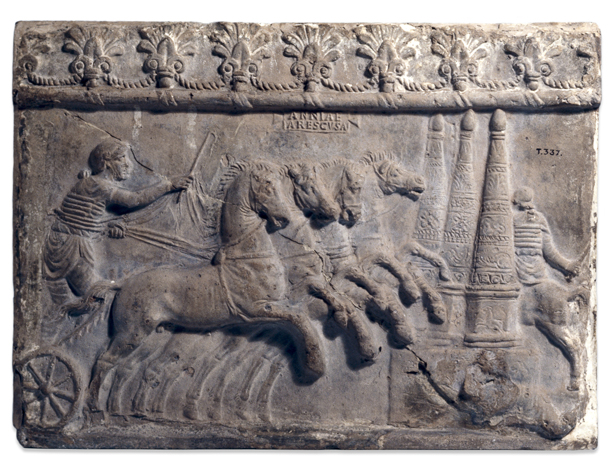 A .pdf of an article by Robert Kebric following Diocles' career may be found HERE. 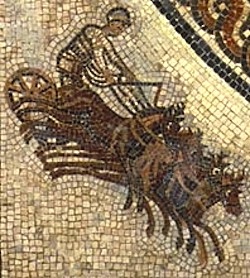 All has been a bit quite here of late on the wargaming front as my day-job work load has been pretty heavy and I have had little time for painting or for playing. Having said that, I have found a few moments to work on the finishing touches of the chariot game I have been developing for Ganesha Games. Once given the working title Bread and Circuses, it is to be officially known as Faustus Furius.

Faustus Furius is a fast and furious, tongue in cheek table-top racing game based very loosely around the chariot races of the ancient world and adaptable to any racing situation.

Designed for 2-8 participants, it allows players to pit chariots (or any other vehicles) from any culture or period against one another in a no-holds-barred race to fame and glory.

Due for release mid-2016, a few sample pages are provided below. 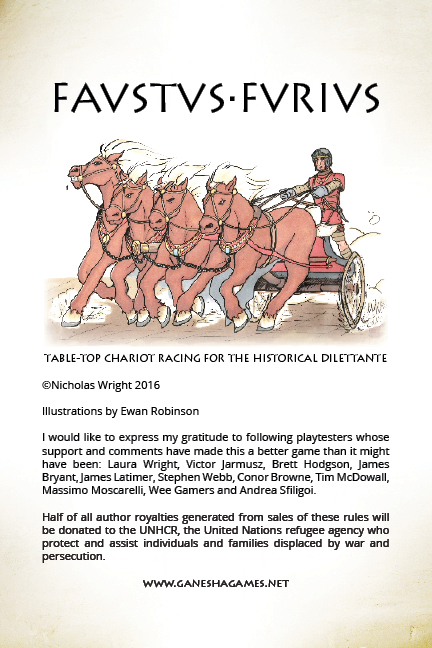 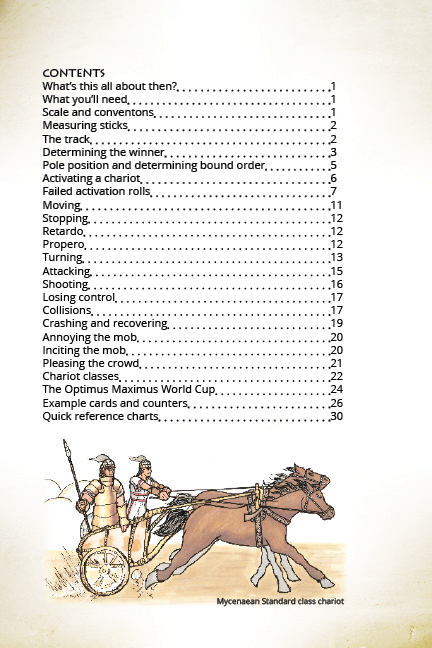 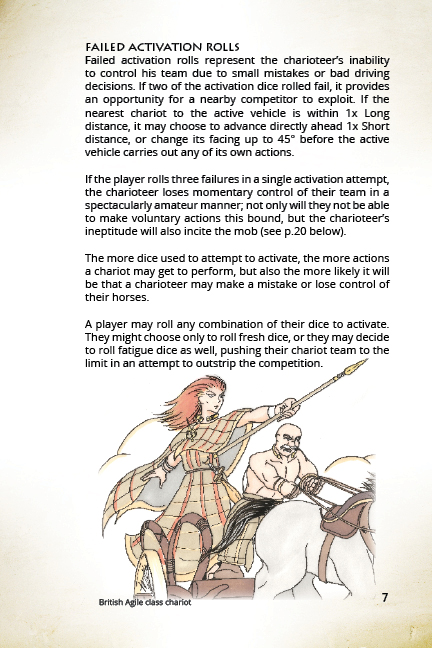 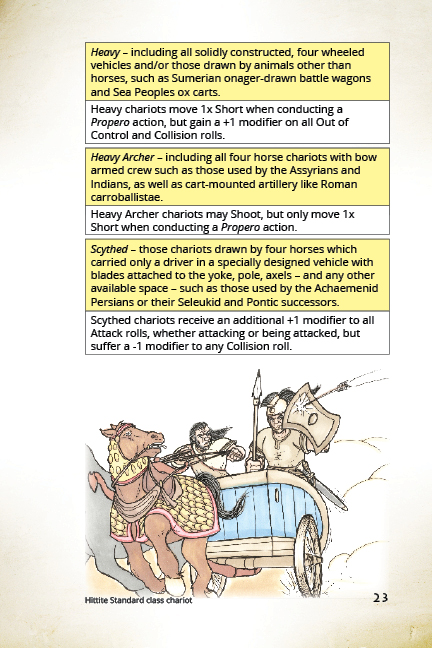