Building an army for Fantastic Battles

In Fantastic Battles, all armies are custom built to suit the player’s vision of their fantasy race, nation or faction. This post is intended to give some insight into the process of building an army with which to crush their enemies.

Armies consist of a number of characters and companies built using the guidelines below. For pick-up games, players would normally agree a nominal point limit of 500-1,000 points within which to build armies. A 1,000 point army might have somewhere in the region of 4-7 characters, and 15-25 companies. Games with multiple players per side are easily accommodated.

The rules will include a number of pre-generated army lists based on the armies of the various play-testers, but these should be seen as suggestions rather than canon, and players are encouraged to create armies that suit their own collections.

Characters
Each army must be led by a single warlord (or a necromancer) and may also include a number of other individual characters who are classed as captains, magic-users or rogues. Character types are standardised to reflect the battlefield role of individual personalities; they are not customisable except for the spell choices of magic-users.

Warlords/necromancers are the player’s avatar on the table. They have the best capacity to maintain command of the units around them and rally them when their resolve flags. Captains have a reduced capacity for command, while rogues and magic-users may only command units to which they are attached. Each magic-user has three spell slots which are chosen from a list of spells (currently there are 10). There is some access to magic items in the form of relics, but their impact is limited.


Characters are essential to any army, but they will never be game winners. They may move freely around the battlefield as individuals, but this is not a game where a single hero can expect to last too long against an entire unit of enemy warriors. Characters can attach to any unit, bolstering their Resolve and Melee capacity, and some ‘units’ (such as dragon matriarchs or giant chieftains) may also take character traits to allow them to lead their peers into battle.

Companies
The building block of the army is the company. Each company is recruited from one of seven base profiles and can be allocated up to three distinguishing traits ranging from amphibious and berserk, to flying, monstrous, mounted and undead.

An army may also apply a racial trope. The racial trope is a single trait which applies to all companies (not characters) of that race in the army; i.e. ‘all dwarves are doughty’, or ‘goblins are notoriously unreliable’.

The base profiles include elite, formed and irregular companies, as well as dragons, fantastic beasts, vehicles and ordnance batteries. With 40 traits to choose from (currently), it is possible to create well over 1,000 different company profiles.

Example companies
The following examples outline the process of customising a company roster. Although both are based on an Irregular company base profile, the two examples will play very differently due to the allocated traits. 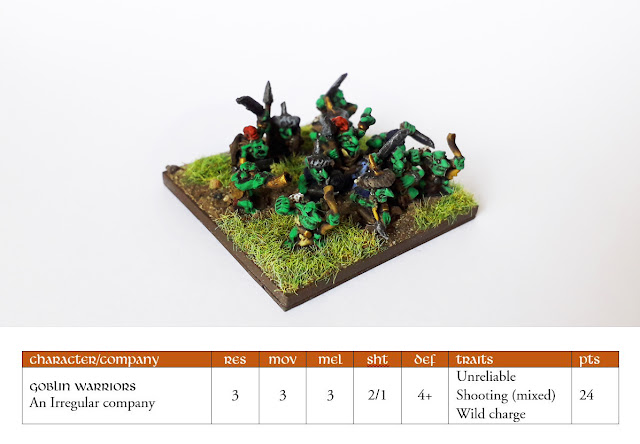 Whether dwelling in damp caverns, wild hills or the vast steppe, Goblin Warriors habitually wield wicked short bows but are always willing to throw themselves into a brawl with anyone who stands in their way. Goblin Warriors start as an irregular company (22 points) with the unreliable trait as a racial trope to reflect their argumentative nature (-4 points). They are melee troops who also carry bows, so receive the shooter (mixed unit) trait (2/1 Shoot, +4 points), and their enthusiasm to get into a scrap gives them the wild charge trait (+2 points). 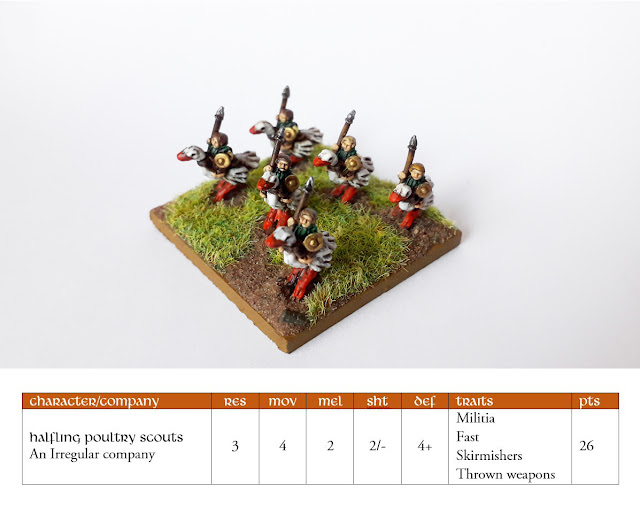 Riding out to patrol the borders of the halfling shires, what Poultry Scouts lack in punch, they make up for in versatility. Beginning as an irregular company (22 points), the scouts are obliged to take militia (-1 Melee, -2 points) as their halfling racial trope to reflect their less-than-martial nature. Their small feathered mounts are not impressive enough to provide the mounted trait, but they do grant the fast trait (+1 Move, +1 point). As javelin-armed scouts, the riders gain thrown weapons (+1/- shooting, +1 point) and the skirmishers trait (+4 points).

Forming Units – Companies and Groups
During deployment, a player chooses to deploy their companies as individual small units, or combine up to four companies in larger group formations. With the exception of companies with the giant trait, any type of company may be grouped together in this way, whether it represents a horde of zombies, a grand battery of artillery, or a clutch of dragons. The only condition is that all companies in a group must have an identical profile and traits. Companies formed into a group during deployment must continue to operate as part of the group throughout the game. Likewise, companies deployed individually cannot be merged into a group later in the battle.

Individual companies are more manoeuvrable than groups; they can more easily navigate between terrain features, and find it easier to position themselves to attack enemy units in the flank or rear. However, by their very nature, lone companies tend to have less Resolve than groups, and lose Resolve faster when they see larger units scatter.

Groups consist of two, three or four identical companies. They have more restricted movement than individual companies, but combine their Resolve factors with the result that larger units tend to stick around on the battlefield longer than smaller units.

That is all for now. Over the next couple of updates on Fantastic Battles, I'll be posting some example army lists in full.