Let Them Eat Cake: an SSD game in Pattayavium - part 1

I'm pleased to be able to share another cracking game report from Mark in Thailand - this time we return to Pattayavium, the apocryphal Greco-Roman outpost in the Indies. Its a bit report, so I've split it over a couple of posts on Mark's request. Part 2 can be found HERE.

The prologue:
In this remotest outpost of the Graeco-Roman world, where we set our stage, the year of the Squirrel is not going well. The southeast monsoon is late and maritime trade (the raison d’être of the settlement) is at a standstill. The harvest has been poor again. Grain prices are rising with the temperatures. Those who can have left the town, for their country villas or their family villages. Those who have nowhere to go are in a dangerous mood. The times suit rabble rousers who know an incendiary grievance when they see one, and Pattayavium is not short of either ...

The principal players:
Octavius Catiline (politician)
Q2 C2 Demagogue, Dynast
A leading slave trader and member of the Trader elite, he is actually going under from gambling debts and on the verge of ruin. He plans to tell everyone who will listen their problems are all caused by the Prefect (who he fantasises is responsible for his own woes).

Iunius Cicero (rabble rouser)
Q3 C2 Demagogue, Plebeian
Well known as a street corner stirrer around the town, tho normally tolerated by the authorities as a bit of a joke. But he has realised how the grain shortage can be turned to his advantage.

Aulus Spiculus (Civic Pontiff)
Q2 C1 Coward, Dynast, Slow, Threatening
One of the inner circle at the top of Pattayavium society. Looks down on Catiline and the Prefect as parvenus, though he himself was once a slave to the Governor of Syria. Notorious as a grain hoarder and speculator. He is the author of the comment about eating cake, in response to pleas from many quarters to sell grain at affordable prices. He is determined to survive and hold onto his wealth.

Marcus Incognitans (Prefect)
Q2 C2 Dynast, Heavy drinker, Leader, Lucky, Threatening
Ruler of Pattayavium for the past five years. Not popular, but widely feared and generally regarded as better than any alternative. He must survive and restore order with as little destruction and mayhem as possible (unless to remove threats).

The supporting cast:
Brasidas and his gang: usually to be found hired out as “security” by one merchant or another. At the moment they are being paid by A Spiculus to guard his granaries. They are loyal up to a point but Spiculus is a scrooge about paying wages.

Barabbas and his gang: the most feared bandits in the area, they commit robberies and are standover specialists, and sometimes operate even in broad daylight. There are ugly rumours they have high-level protection.

The Prefect’s Guard: Led by their officer, Victor, many of these men came east with Marcus, and they are personally loyal to the Prefect. But there are not many of them.

Levi and the zealots: Levi is a distinctive figure around Pattayavium as he always wears the full ceremonial dress of a Hebrew priest. He has a small entourage of zealots who attend him and obey without question.

Captain Feisal and his crew: The captain and crew of the vessel Mariamne are stuck in port because of contrary winds. They’re armed to the teeth (necessary to survive at sea in these waters) and foreign even by Pattayavium’s loose standards. And bored. Who knows how they will react in a crisis.

Assorted artisans and civilians: Artisans are armed civilians, being farmers, hunters, retired veterans and so on. They mostly carry weapons such as farming implements, but a few have swords, spears and missile weapons. They are Armed, and not Rabble, but still Plebeian.

One new figure debuting this game is Ozymandias (security guard) and his trained baboon: Q3 C3 Animal, Disarm, Protect. “Have you seen the size of that thing, and the canines?”

Setting the stage:
Here are some overhead shots of the area around the temple of Buddha Optimus Maximus where the trouble started.

Looking North. The centre of the table (L to R) is occupied by the avenue known as via Umbria, which leads to the main civic temple. In front of the temple is the new Spiculan fountain, a recent liturgy of Aulus Spiculus. On the S side of the temple are the Gardens of Mus, part of Spicula’s villa. The frontages of the via Umbria are lined with shophouses. Behind them on the N side is part of the Khlong Mapyailia, one of the poorest quarters of the town, home of immigrant workers mostly. On the S side are most of the town’s brothels and bars, including the “Dolphin”, the “Eros”, the “Dryad”, and (largest of all, over on the Mapyailia side against the N wall of the temple) the “Bacchic Revel”. 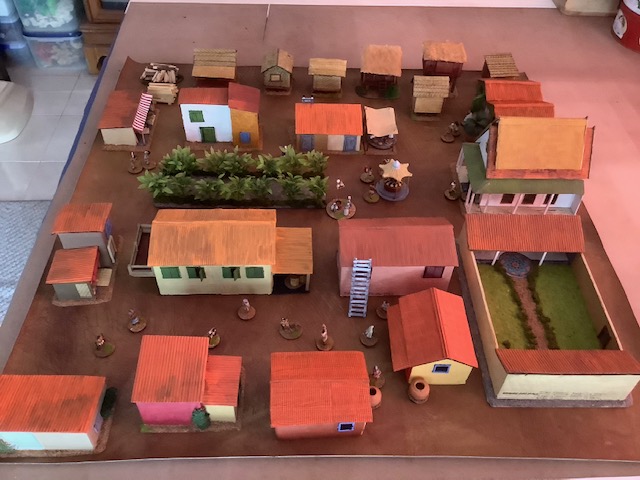 Looking South. Of the main characters only Aulus Spiculus is present. He is standing on the front steps of the temple, gazing complacently at his fountain, and giving orders to Brasidas the foreman of his enforcers. Other civilians can be seen going about their business. A two-man patrol of the Prefect’s Guard has just entered from R and can be seen just above the red striped awning along the R Table edge. 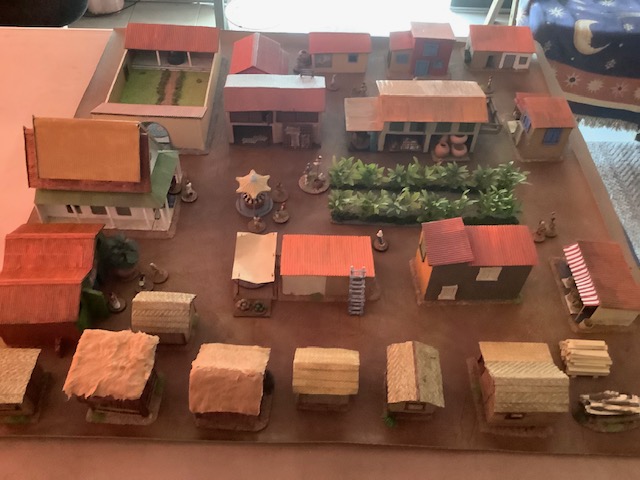 The other leading players and supporting cast will make their entrances as Turns revolve and the dice rolls decide. Except that maybe, perhaps, some are already on stage but concealed by scenery (ie inside brothels).

Turn 1:
Octavius Catiline enters from the S side, in the area of the brothels. It turns out that, as Dynasts go, he is Loathed, tho this is not expected to affect his forthcoming career as a demagogue. The career paths of Dynast and Demagogue are mutually exclusive as a rule, tho not for those named Catiline perhaps. Like all players he gets three free activations on first taking the stage. He also come with three followers attracted by speeches he has made elsewhere this morning. He takes up a position near a grain shop and starts his spiel. Very successfully, as two more followers join the cause.

Iunius Cicero enters from the opposite side of the table, in Khlong Mapyailia. He brings two followers, He decides not to make any speeches immediately tho, and instead heads for the Spiculan fountain.

The two-man patrol of the Prefects Guard (Teres and Senex) proceeds along the via Umbris towards the Temple. They find themselves a few paces behind Cicero and his followers.

Lastly, Brasidas’s gang members come out of the Bacchic Revel gentleman’s club and join their leader in front of the Temple.

The next photo shows Catiline speaking outside the grain shop. Ozymandius and his baboon will not get involved as there is - currently - no threat to the brothels he is hired to protect. 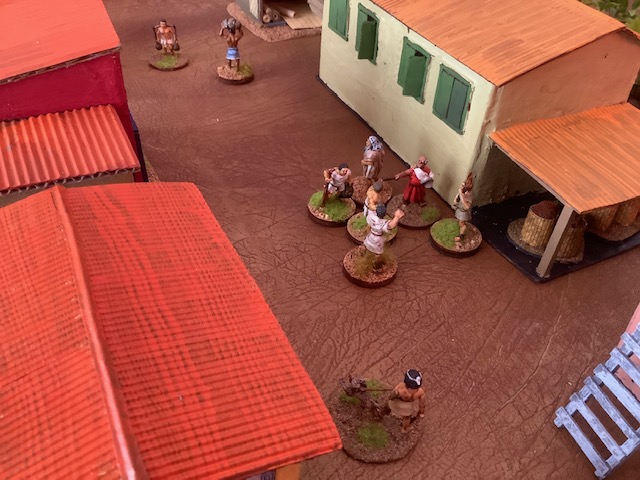 And the next photo shows Spiculus (who turns out to be Respected as a Dynast - who knew!) standing on the temple steps, and Brasidas and his gang clustered below. The Bacchic Revel is the green building with the potted palm. Cicero and his followers are just coming into view at the near end of the via Umbris. The Guard patrol are off-shot to the L. 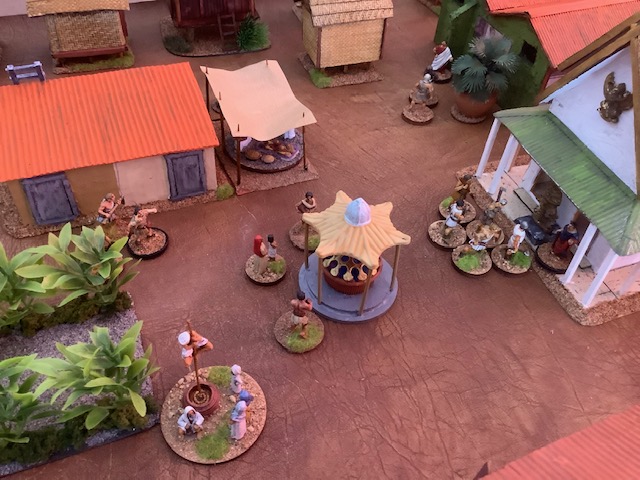 Turn 2:
As the morning wears on more civilians and artisans appear on the streets.

Cicero arrives at the fountain and starts to speak. This attracts three nearby civilians - mainly folk on their way to draw water from the fountain. For the moment, the attraction of hearing Cicero outweighs the potential distraction value of the nearby rope trick.

The Guard patrol move up and, across the open space, spot Brasidas and his gang plus Spiculus. That’s what is called a suspicious circumstance in the handbook, and Teres and Senex move in for a closer look.

Catiline is still in the red light district, and another five civilians are showing interest. He is gathering quite a crowd.

All the action fits into one photo this time. Cicero and Catalina are drawing sizeable crowds and the Prefects Guard (seen just above the Temple) tho focussed originally on Brasidas’s gang, are listening with disquiet to what Cicero is declaiming. 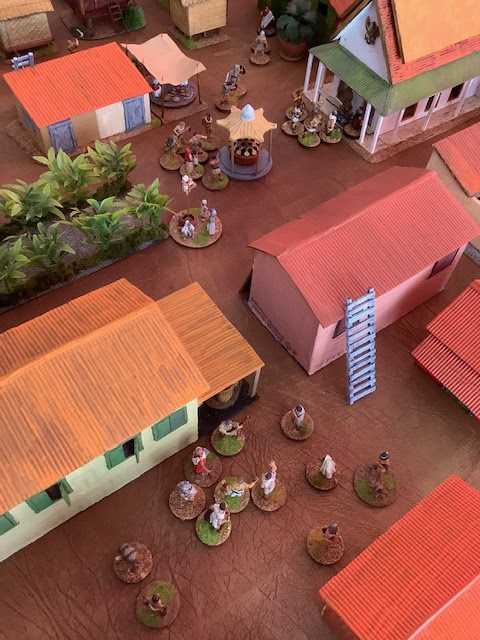 Turn 3:
Teres and Senex are smart enough to know something is up, and that they need to report it. They head off as fast as they can, through Khlong Mapyailia, to report to their officer, Victor.

Catiline continues to wind up the crowd in the red light district, they are beginning to mutter anti-regime sentiments and there are a few cries of “down with the Prefect” and “redistribute the land”. Catiline is turning out to have a talent fir this new calling, at the end of this turn he has nine actual adherents. But, in the bustle, one civilian (the humble porter) who was tempted, but passed his activation roll, then passed a second roll and so set out to inform Authority and claim the standing reward for informing on subversion.

Cicero failed a triple activation attempt so his own recruitment efforts have temporarily stalled.

Brasidas and his men have been grudgingly paid their weeks wages by Spiculus (who walks off into his villa) and, after sine discussion, they decide to visit a new brothel (the Eros) and head off towards it.

Here you can see the humble porter sneaking off at top R. Brasidas and his men are entering the street at bottom R. 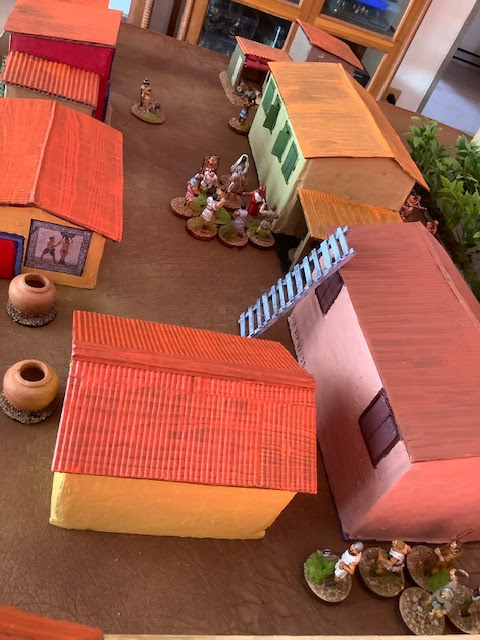