Let Them Eat Cake: an SSD game in Pattayavium - part 2

What follows is part 2 of Mark's latest report from Pattayavium. Part 1 can be found HERE.

Turn 4:
Cicero now roused his faction to a pitch of anger against the iniquities of grain hoarding, and deftly pointed out that one of the leading offenders - Aulus Spiculus, the Civic Pontiff no less - had an opulent villa practically next door, bound to be  full of barns bursting with grain. With that, they were off (triple roll group activation). In the excitement of the moment they clean forgot to check for the rope trick distraction. The mob brushed past the doorkeepers and confronted Spiculus in the Gardens of Mus.

Spiculus could be in trouble. The contingency roll to see if one of his household slaves slipped away to summon Brasidas & Co was negative. No help is in the offing.

Meanwhile Brasidas and his men are enjoying the delights of the Eros: listening to a reading of Homer, comparing Falernian with Cyprian vintages, and discussing the Concept of the Self and the Other.

Barabbas and his gang, just at this moment, enter the table looking for trouble. They come on at the west end of the via Umbris and head straight towards the temple, stopping to shake down a couple of civilians they encounter.

And Catiline starts to lead his mob out of the red light district. His plan (well I have to call it something) is to lead them across the table and off the Khlong Mapyailia edge, towards the Prefect’s villa and admin centre (basilica) off table. I’m letting this happen as a single group move even though there are more than 5 figures involved.

Here, Barabbas and his gang are robbing two women they have encountered. 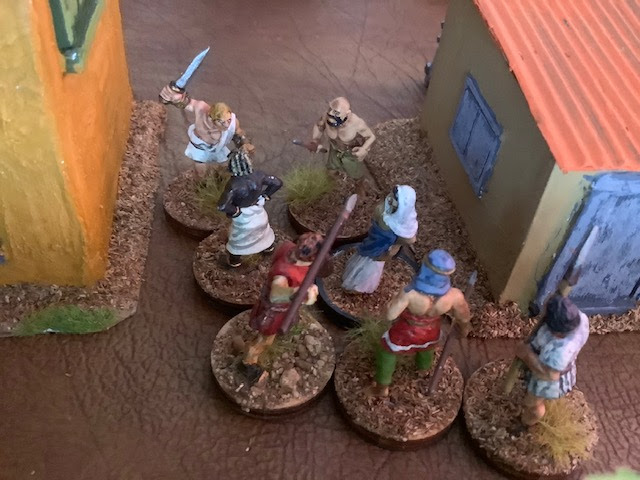 Meanwhile, Aulus Spiculus is also being bailed up, by Cicero and his followers, in the garden of his villa. 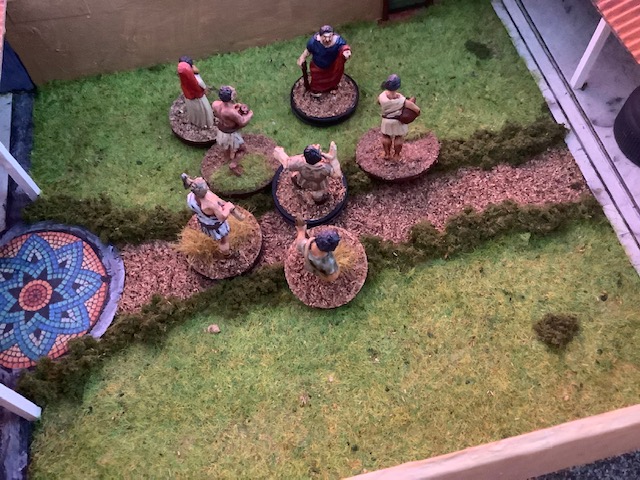 Turn 5:
Cicero and his mob, and Spiculus, have to undergo a sequence of contingency rolls now, to find out what happens next. Here’s how it went: Spiculus, ever the coward, failed to use his Dynast hauteur to threaten the crowd, and instead tried to make a run for it through a door in the garden wall behind him. You can see a bottom corner of it in the photo). But someone in the mob, most likely Orestes, a small farmer (Artisan) swindled by Spiculus, split his head open with a hoe, and the Civic Pontiff fell dead in front of the door. Blood everywhere. The individual mob members then all had to pass Q tests (1D6) else have second thoughts and slip away. Only two passed, plus Cicero, so most of Cicero’s following were removed from play and returned to random street positions (dispersed). But Cicero and the remaining two hardliners began searching the villa for the grain stores ...

Barabbas and his men finished their sport with the women and moved on, swaggering along the via Umbris towards the temple. They paused near the fountain to extort money from the stall holder who had an awning there and decide what to do next.

Catiline and his followers continued their march, watched by bemused bystanders. They have crossed the via Umbris and entered Khlong Mapyailia. The photo shows their triumphant progress ... 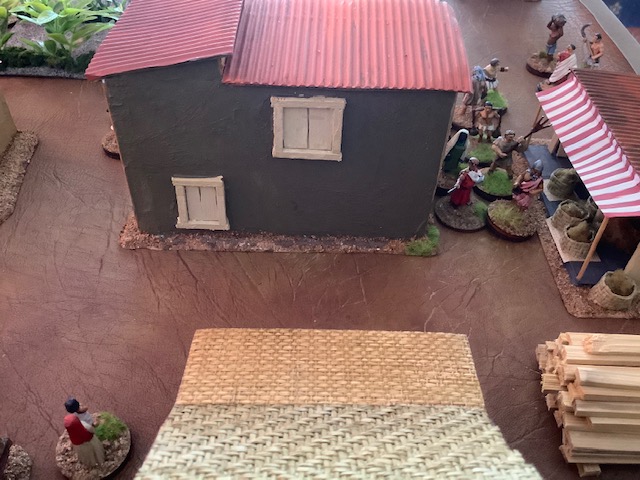 Turn 6
... which could be about to be rudely interrupted. Victor at the head of every available man from the Prefect’s Guard enters the table on the Mapyailia side. With him is the Prefect himself. They know about Catiline’s rabble-rousing from the informer, and also that Brasidas and Cicero are working the area, from the report of Teres and Senex, but that’s all.

Catiline and his people turn the corner and find the street blocked by the Guard. All must pass Q tests now they are facing a decision about whether or not to clash with these feared guards, all veterans of Roman army service in Palestine, in a Thracian auxilia unit. Four decide to slink away, and are removed, same as Cicero’s waverers. The others line up ready to take on the forces of authority. Catiline though, edges into the back rank. Here is the scene. 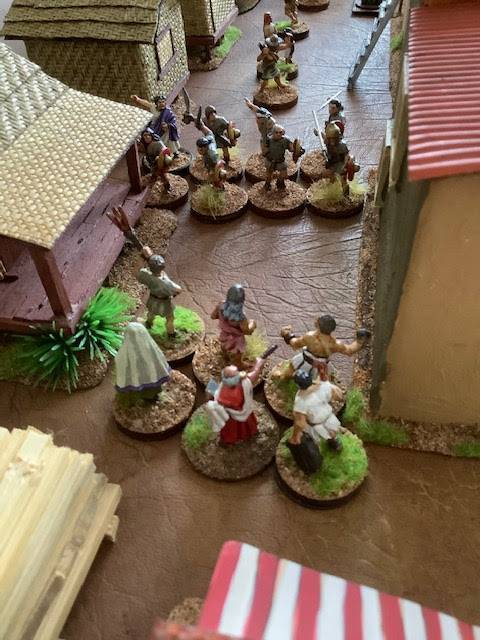 Barabbas and his crew have been distracted by the Rope Trick street performers near the fountain, and are temporarily out of play.

Brasidas and his gang emerge from the Eros and, nursing headaches, make the short walk back to the villa of Spiculus, to take up their guard duties. As they approach the main door, terrified household slaves run out with the news ...

Turn 7Poised at the entrance to the villa, Brasidas hesitated (failed 1/3 activation dice) and he and his gang ended up advancing cautiously into the garden. There, they confronted Cicero and his much smaller faction of hardcore followers, now weighed down by loot. Against the odds, no grain had been found.

Barabbas and his gang didn't move. Rolling one activation dice each to break the distraction effect of the Rope Trick, 4/5 characters, including Brasidas, failed! Maybe they’re hoping to pick up tips for housebreaking through upper floor windows.

The Prefect’s Guard was all set to charge into Catline’s mob, but Victor failed his activation roll and so the troops held position, but took a short run and launched a volley of javelins. The shooting wasn’t very good though. One rioter was knocked down, another was pushed back. As the civilian (but not artisan) rioters have the Rabble trait, they are “killed if beaten in combat”. Is being whiffled by a javelin “in combat”? I ruled yes, and so one rioter was killed.

The Prefect also failed his activation this turn, but he also rolled to determine his Heavy Drinker characteristic: he is a Combat Master for this game.

Catline in response rolled two activation successes and his whole mob surged forward, eager to come to grips with the guards. The narrow street was wide enough for only three combats. Catiline has 2 artisans and 1 civilian in his front rank. The rioters get Plebeian solidarity, and also count as either Armed or Rabble. All guards are Armed. Each side won 1 melee (push backs) and there was 1 draw.

Here are photos of the two confrontations now under way.

Brasidas and Cicero face off in the villa garden. Aulus Spiculus’s body has been discreetly removed by his valets, and stripped of valuables. 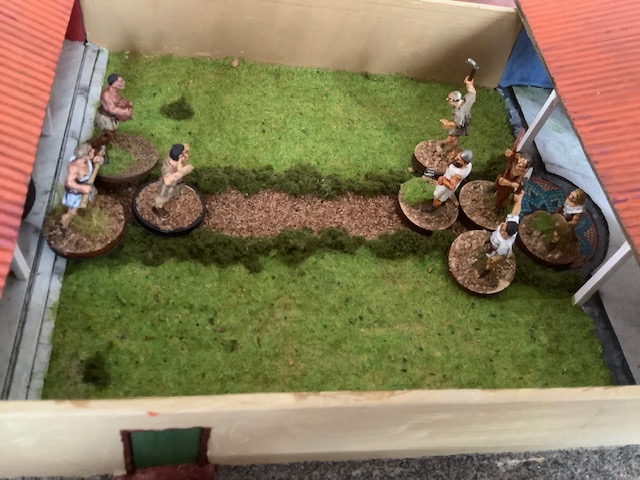 Catiline and his rioters, and the Prefect and his guard, get stuck in. That’s Catiline in the red and white clothing at lower L. The Prefect in purple and white is at upper L. 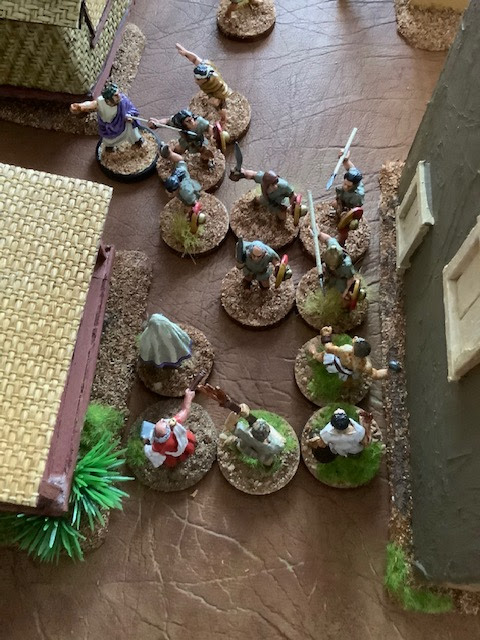 Turn 8
Although Cicero and Brasidas were a bit more than S distance apart, I ruled that Cicero could attempt to suborn the gang to join his faction. After all, Spiculus the gang’s employer is already dead, and there is this big villa full of loot ... Cicero duly rolled three activation successes. The entire gang, including Brasidas, then failed their Q test rolls and threw in their lot with Cicero. Let the looting begin! 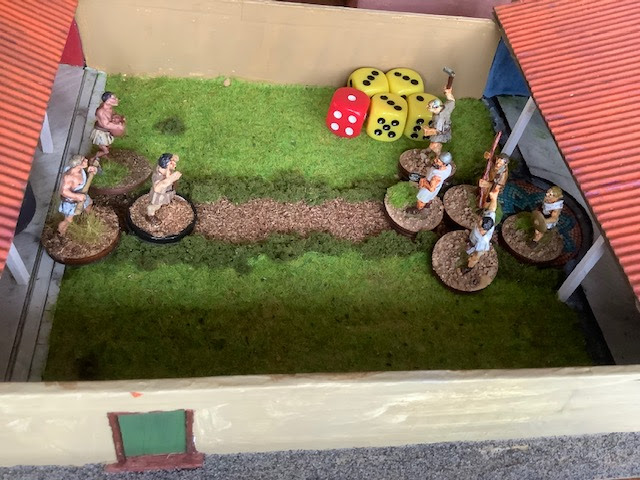 Barabbas broke free of the rope trick distraction, and collected his men together. He decided to head back down the via Umbris, away from the temple. More civilians were in the street now, all potential victims. And sounds of fighting could be heard, coming from somewhere over there. Worth investigating.

In the battle between Cataline’s rioters and the Guards, the rioters moved first. Two of them and one guard fell. When the Guards’ turn came, they killed the two prone rioters, and their own prone man got back up. The Prefect then rolled three activation successes and used them to move up to Catiline (exposed by the loss of the followers in front of him) and attack him with a power blow. Catiline fell to the ground. Victor, the guards officer, then moved up and finished off the prone Catiline. His two surviving followers rolled their morale tests. One turned to flee and was cut down in a free hack. The other fled. 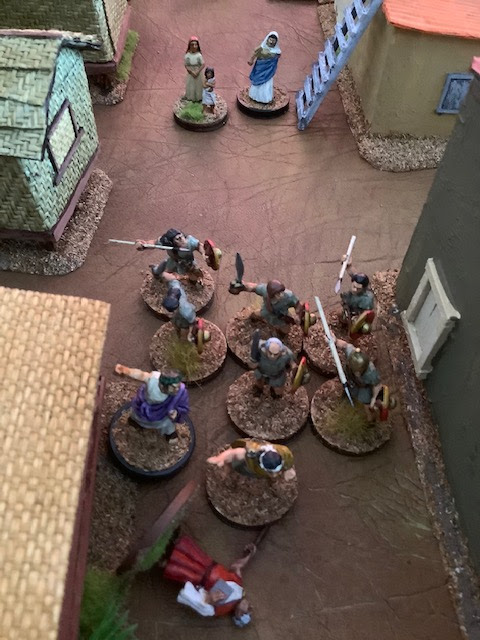 Bodies (except for Catiline) have been removed in the photo above.

Turn 9
It’s late afternoon now. The Prefect and his guards decide to check the neighbourhood, and move out into the via Umbris. As they enter the Main Street, they spot Barabbas and his crew through the trees.

And the bandits spot them too. The fate roll decreed that the bandits decide to push off to pastures new. They pass some stunned civilians without robbing them, and scurry along to put distance between them and the guards.

Just at this time, Captain Feisal and his crew appeared, at the end of the red light street, possibly intent on whiling away an evening there. As the game is so close to finished we’ll let them go about their business. There has been no sign of Levi and his zealots, they have failed to make an appearance.

Cicero and Brasidas and their followers are continuing to loot the villa, joined by the more adventurous household slaves. Some fires have started smoke is rising, probably to be spotted by the Prefect and his Guards as they check out the neighbourhood. But that’ll have to be another game ...

Here are some final photos.

Feisal and his crew saunter up red light street towards the brothels (identified by their lurid paint-jobs and exterior signage). Ozymandias the security guard, and his attack baboon, keep an eye in them. Have a good time gents, but no trouble please. In the distance, smoke rises from the villa of Spiculus. Perhaps the gardeners are burning dead leaves? 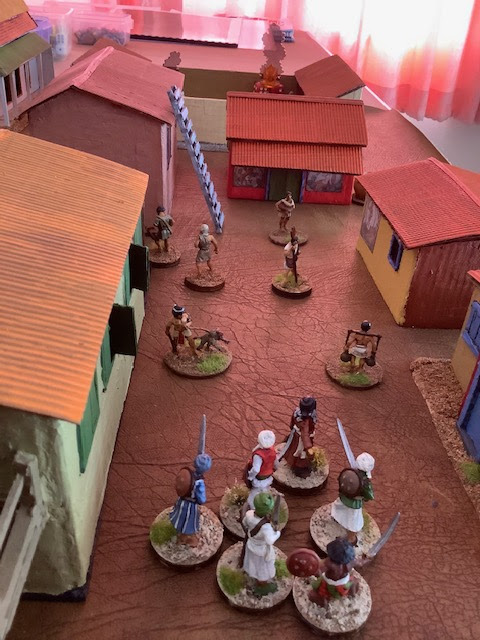 The scene on via Umbris as Barabbas’s gang, and the Prefect’s guards, spot each other through the avenue of trees. The bandits have decided to fight another day, and are heading off past the potter’s shop. A carpet shop and animal hide shop can also be seen further up the street as I add fine detail to my street scapes. But what I really need are some 28mm animal carcasses so I can set up one or more butcher shops. Any suggestions? Washup
From the Prefects POV order has been restored with minimal damage to life or property. Even (looking forward a day or two) the elimination of Spiculus has a silver lining, as Marcus never liked him and can now appoint a more useful replacement. And confiscate the villa as the ‘proceeds of grain speculation’ - a politically popular move.

Neither of the Demagogues has succeeded in their primary aims. Catiline is dead, definitely not a success (unless you’re a Christian). Cicero has achieved a personal triumph in winning over Brasidas and his gang, but has not actually liberated any grain stores. His followers, arms full of loot, are happy though. For now.

Spiculus of course, along with Catiline, has had a bad day.

Quite a long AAR even by my standards, and not a lot of dramatic action. It took four days to play (in between home schooling, splashing in the pool to avoid the oppressive heat, and other interruptions). Probably at the upper practical limit of complicated contingency / fate dice interactions though.

Next time I might break with tradition and play one of the scenarios from the SSD rules. Abduction, or Arson, perhaps.