Confessions of a wargamer (and a new scale...?)

I entered the world of tin soldiers at the impressionable age of 10. I was taken to a pokey shop, now closed down, in the centre of Sydney by a school friend and bought for myself three identical 25mm Napoleonic figures at about $1.50 each. To this day I am still unsure what they were - I suspect they were a Prussian artillery officer but couldn't say for sure. Through variegated levels of peer pressure I was, for a time, distracted - first by fantasy and then sci-fi wargames. The type of game produced by large companies whose legal juggernaut makes me shy away from naming them in a public forum. Lets just say that they don't like you to play with anyone else's products at their table. You know the one I mean.

Finally, towards the end of high school, in a garage at another friend's house, I saw his dad's 15mm DBM late Roman army. With an epiphany I realised that there were other games out there and they allowed you the freedom to play with a low budget. The possibility emerged of combining my overwhelming love of the ancient world with wargaming.

Over the next few years I gave up my fantasy heroes with their exaggerated weaponry and came to collect numerous 15mm armies for numerous different games. Napoleonic Austrians, Minoans, Greeks, Greeks, Macedonians, Paionians, Greeks, Sub-Roman British, Seleukids, Pergamenes, Ituraeans, a few more Greeks. Then I discovered undergraduate life. Drinking. Studying. Girls (mostly just out of reach...). I gave up on wargaming; it was kids stuff. I was an adult now and didn't need that stuff.

I traveled around the world. As advised by Cat Stevens, I found a girl, settled down and married. I embarked on postgraduate study. I spent long hours alone in rooms with computers. My eyes wandered. I discovered that in my absence the gaming world had changed. There were new exciting games, new miniature manufacturers. In responsible adulthood I rediscovered the love of my teenage hobby. I realised that I was an adult now and I needed all that stuff - and now I could afford it to.

I started re-collecting in different scales, 10mm, 15mm, 28mm, all to fulfill different needs; fantasy ancients, early medieval/Arthurian. Inspired by the eruption of new and bespoke rules systems, I started to write my own rules to cover historical stuff that I couldn't find rules to cover. I also happened upon Ganesha Games who taught me that fantasy gaming could still be fun and flexible.

Now, for the first time, I have started to paint 6mm ancients. A test run, some Greek archers by Rapier, just to see if I like the scale - for a future big battle project. 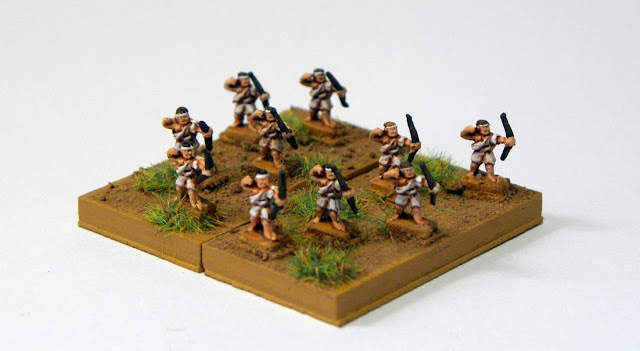 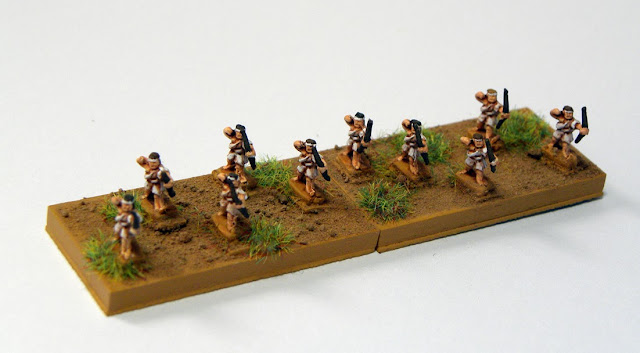 And as an update - here are the same lads with different sand. The first stuff, taken from a field in central Ulster, was too fine-grained. The new sand is builder's sand, used for sweeping between newly laid pavers. 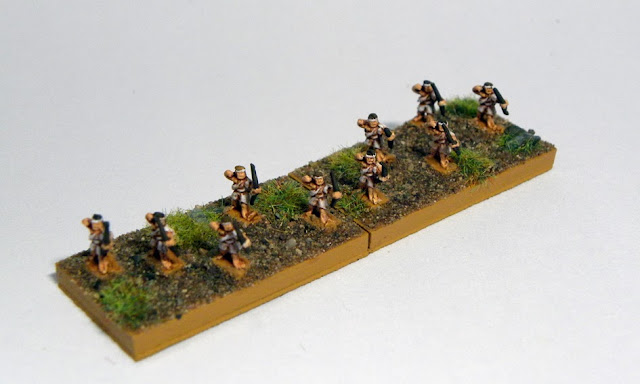