The pride of the Seleukid war machine - tiny nellies!

Well, I'm about to start a new contract which will have me commuting to Dublin for a little while so I thought I'd try and get one good post in to start off October. We'll see how many other posts get done when they get done.

One of the most famous aspects of the Seleukid army, both to their contemporaries and to modern types like us, was their penchant for flashy, expensive, novelty weapons like scythed chariots and, of course, Indian elephants. Indeed, elephants became such a major feature of the Seleukid royal imagery, that they became a shorthand symbol of Seleukid military might, appearing on documents such as coinage and seals, and featuring strongly in the historical documents (and treaties) prepared by the enemies of the king.


The first, and most extravagant, deployment of elephants under a Seleukid banner that we know about was 480 of the beggars fielded by Seleukos I at Ipsos (301 BC) where they were crucial in preventing the Antigonid cavalry from returning to the battlefield.

Thereafter, the Seleukids maintained a herd at Apameia in Syria (modern Afamia), but appear to have needed to consistently drawn fresh beasts from India and Baktria to keep numbers up. They would never have quite as many elephants in one battle again, although they could still prove a battle winner. A small detachment of eight elephants took part in the last battle between Seleukos I and Demetrios Poliorketes in 285 BC, and Antiochos I only had 16 elephants at hand when he one his famous Elephant Victory against the Galatians - probably in the late 270s BC. The terracotta statue from Myrina shown below dates roughly to the third century BC and probably commemorates Antiochos' famous victory after which he was hailed as Soter - the Saviour. 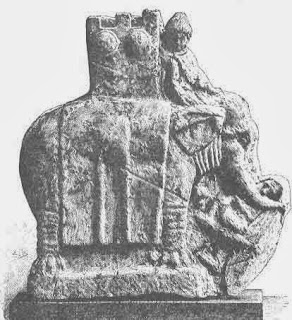 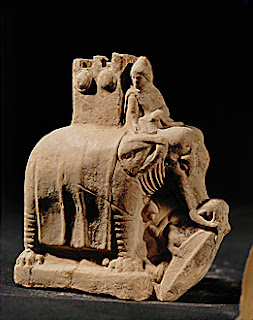 Antiochos III used ten elephants against the usurper Molon, and only a few years later deployed 102 against Ptomely IV at Raphia (217 BC). The herd increased further over the next two decades and 150 were used at Panion (200 BC). Six elephants were part of the expeditionary force Antiochos III led to Greece and fought at the second battle of Thermopylai (191 BC). At Magnesia (189 BC), Antiochos could only muster 54 against the Roman-Pergamene alliance. In the Treaty of Apameia, the Romans forbade the keeping of an elephant corp by the Seleukids and it looked like it might be all over. 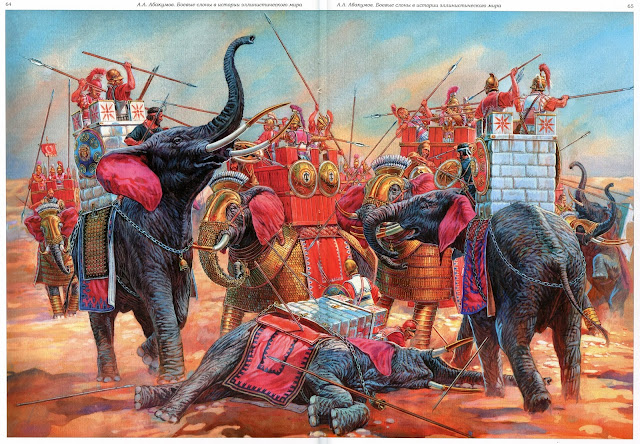 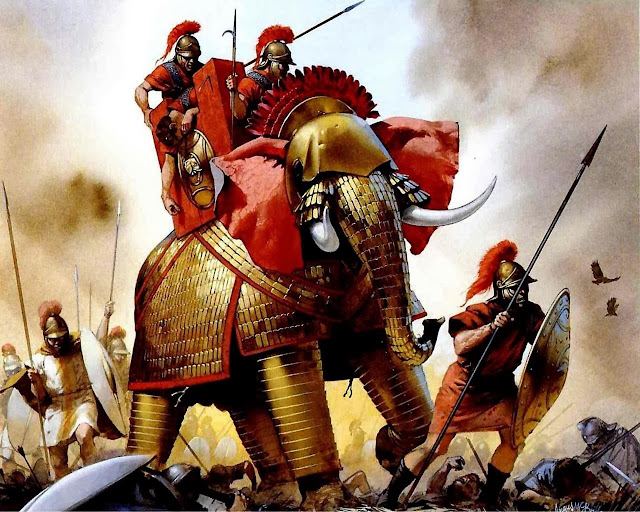 ... But that treaty clause seemed to have escaped the notice of the Seleukids. Antiochos IV used elephants in his Egyptian expeditions and mustered 36 (or 42?) elephants for the great parade at Daphne in 166 BC. The Seleukid commander Lysias probably took 32 elephants to put down the Judaean rebels and their part was crucial in the battle of Beth Zechariah (162 BC). Unfortunately, shortly afterwards, a Roman emissary came and sorted out the little misunderstanding regarding the treaty clause and had the Apameian herd slaughtered in one foul blow.

Sporadic references occur after that to elephants in Seleukid armies, but none of them are particularly enlightening or reliable. Antiochos VII Sidetes (138-129 BC) looks to have inherited a herd of African forest elephants, either left in Syria by the Ptolemies on the death of Ptolemy VI, or else provided by Sidetes' own Ptolemaic sources. Either way, these were not the magnificent Indian beast used by his forebears, but the much smaller (and now extinct) north African variety. Sidetes marched east and on his death, his elephants fall out of the history books. The last 70 years of the kingdom are, I am afraid, relatively elephant free.

Used much like modern tanks, the elephants were shock weapons with especially effective anti-cavalry uses. However,, they were vulnerable to the flanks and the ancient sources carry many references to elephant guards, elephant escorts and 'those who were used to fighting among the elephants'. So, very much like the tankes of the 20th century, they seem to have operated with attached units of light infantry. At Ipsos there may have been as many as 50 men per elephant, while at Raphia, there were about 40 elite Cretan and Neo-Cretan archers around each elephant on the right flank. At Panion there were undefined numbers of both archers and slingers used in the same way. At Magnesia, there may have been around 50 light infantry around each elephant - this would account for the huge internal discrepancy provided by Livy between total numbers and the numbers given per named unit.

And here is my interpretation - 6mm elephants for Hail Caesar with Cretan escorts. The last shot also shows my only other unit to date, my Neo-Cretan archers. All foot figures are Rapier as is the larger of the two elephants (with the raised pike). The other elephant is from Baccus. I think they work quite well together. 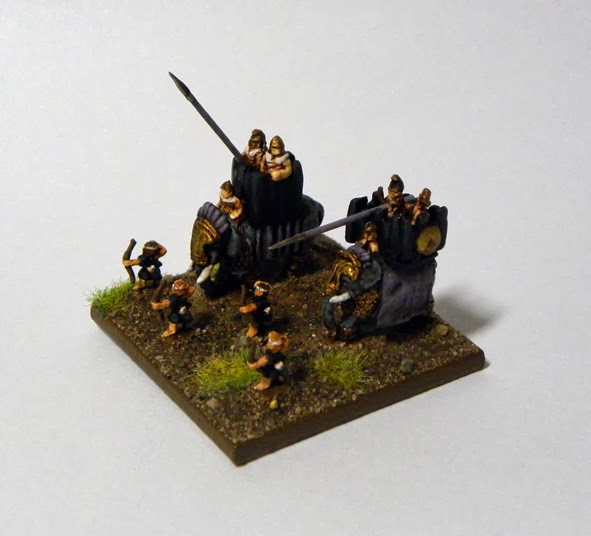 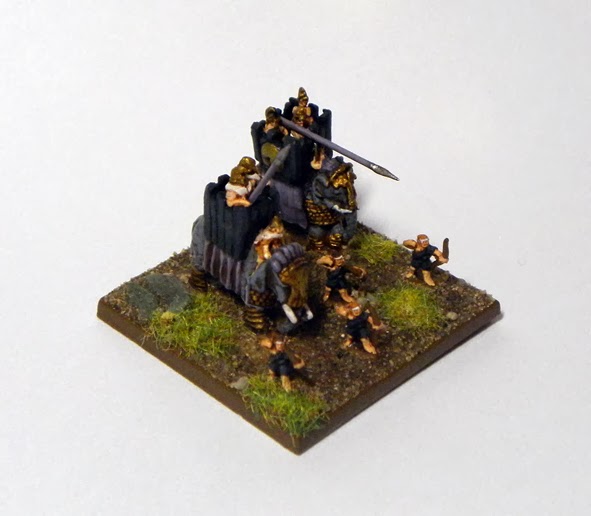 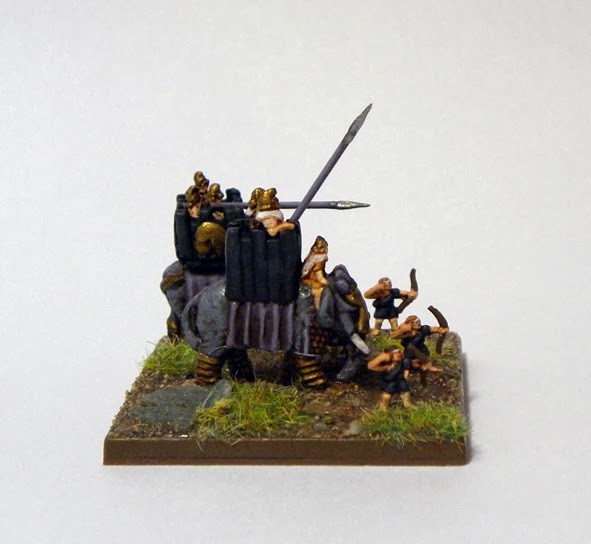 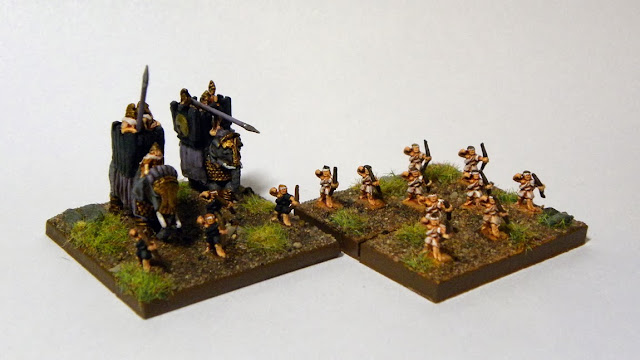 As a bit of a post script, questions have been raised among the TMP going wargamers about how one might kill an armoured elephant. If you are a Judaean fanatic, the answer is really quite simple, even if it did have (arguably) unforeseen consequences:

"Now Eleazar, called Avaran, saw that one of the animals was equipped with royal armour. It was taller than all the others, and he supposed that the king was on it. So he gave his life to save his people and to win for himself an everlasting name. He courageously ran into the midst of the phalanx to reach it; he killed men right and left, and they parted before him on both sides. He got under the elephant, stabbed it from beneath, and killed it; but it fell to the ground upon him and he died." I Macc. 6.43-6. 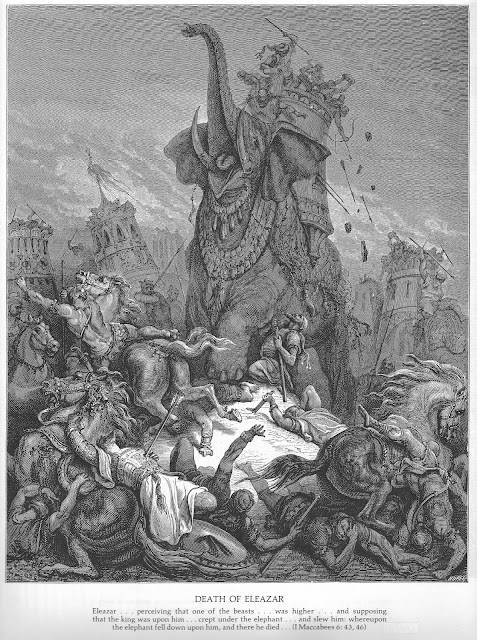