Here is the last batch of four gladiators for my initial pool. I might very well return to do some additional ones at a later date, but I'm not sure that I will need more than 16 any time soon for my immediate plans. 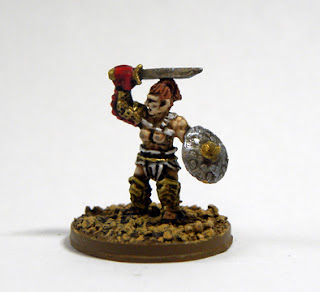 This model is a little bit not safe for work, but just a little (about 3mm of her). I actually just wanted to have NSFW written in the blog as an experiment to see if it gets more hits... anyway... As with all the Mick Yarrow stuff I've done so far, she painted up a little better than expected; certainly the unpainted lead doesn't do the figure justice. I'm not entirely sure what kind of gladiator she's supposed to be, I'm going to use her as a Gallus or Thraex I think as I'm a bit short on them. 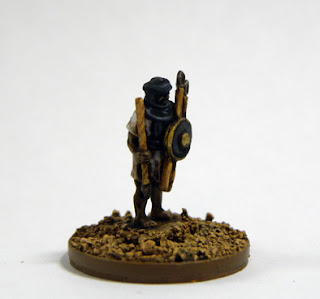 This little chap is the only Lurkio figure I've painted (a Moorish skirmisher) and I really like him. The figure is very slight (just a lad really) but as people come in all manner of shapes and sizes, in a skirmish or gladiator game, I have no problem using him along side his colleges shown here. 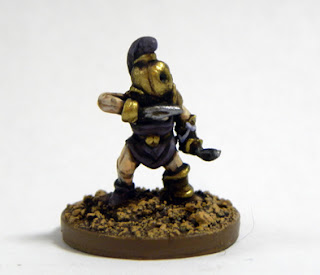 I love these figures from Strategia Nova. This one originally had a small spiked buckler on his left hand but I chopped it off to give him a second bladed vambrace (borrowed from a spare gladiator). 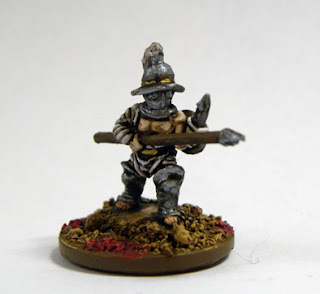 The hoplomachus from Rebel is, like all the Rebel sculpts, a big boy. He's a nice figure and I think he painted up ok - I suspect that he is also the single most accurate gladiator figure in my collection.

... And here are shots representing all the gladiators so far, catagorised by their classes in my forthcoming gladiator sub-game. There are going to be ten gladiator groups of classes altogether, in this collection I have figures for eight of them. The missing classes are the cataphractus (or crupellarius) and the noxius.