The Annals of the Relic of Saint Pius AAR (Chapter 3)


Having dispatched their erstwhile allies, the holders of the toe of Saint Pius had enjoyed little of the expected prestige. Instead, they found themselves harried by their defeated foes from Sorviodunum, recovered now and seeking cold vengeance and slavering at the chance to get their thieving hands on a holy relic. So now, with the smoke of their home cooking fires drifting on the light westerly breeze, the holders of the toe just had to make it across one last stretch of wilderness to home, hearth, and a stout palisade.

This is the third 'after action report' of the Relic of Saint Pius campaign, the full details of which can be found here.

As the victors of the the battle of the stone circle, Aethelwulf and his Angles took the role of the defender in this scenario. The attacker was the Romano-British warband of Flavius Constans. 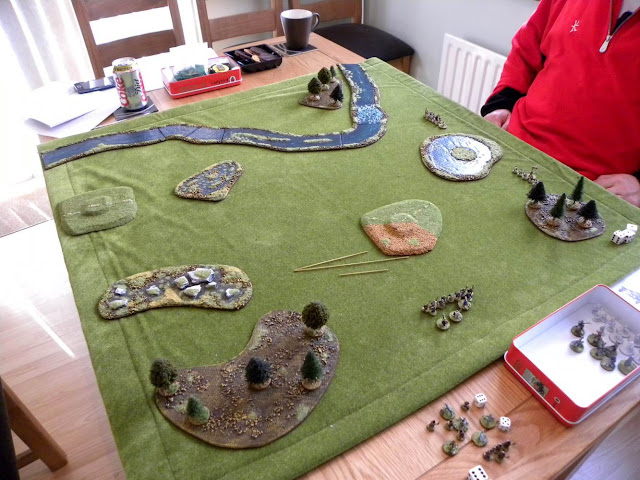 The gallant and unbeatable Angles deploy along one edge of the table. Flavius Constans, having gathered enough recruits to rebuild his warband, deploys along the Angles right flank. All terrain pieces (including the river) were treated as potentially hostile with a 33% chance of tripping up or drowning figures trying to cross them. 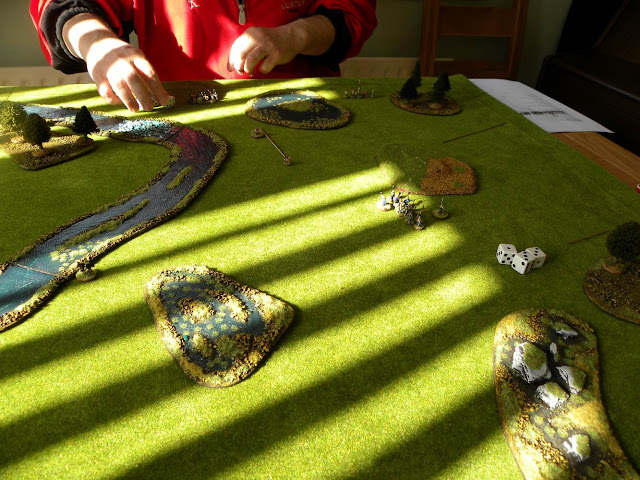 Aethelwulf and Sigtrygg lead forward the spearmen while Godgifu rides on ahead. On their right, Constans martials his own spearmen for the attack. In the real world, the table glows bright from the setting sun (proving once and for all that it doesn't rain all the time in Ireland!) playing havoc with the photography. 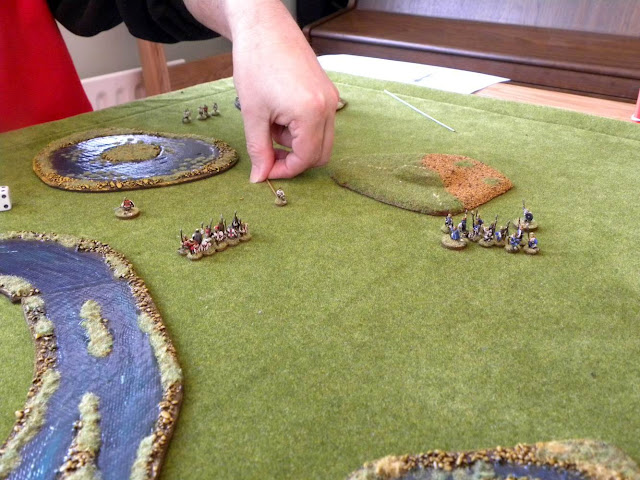 The British line starts to close in ... 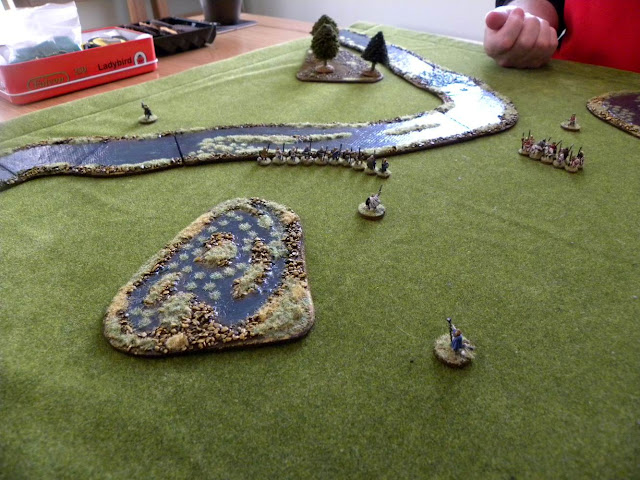 ... as the Angles surge forward towards the river. 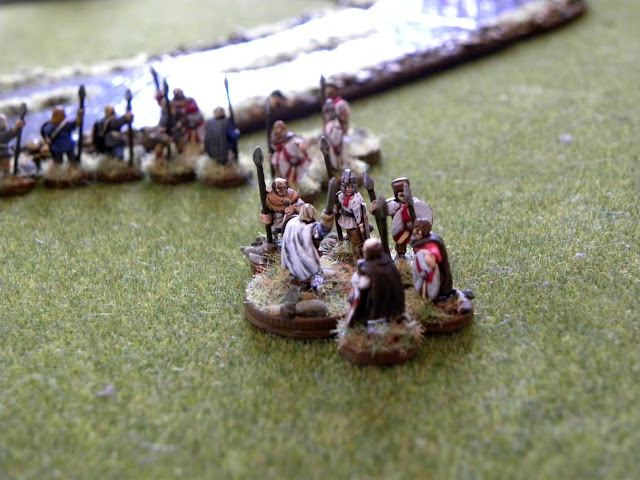 Aethelwulf holds off a determined assault, trying to let his lads get away over the water. 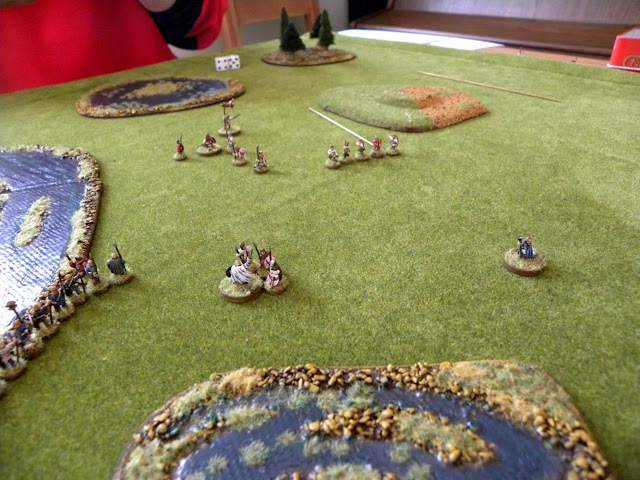 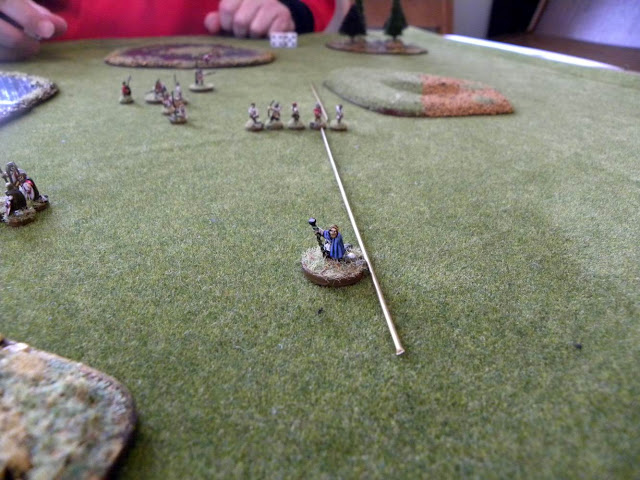 ... and unleash a volley at the Anglian bard but he manages to dodge most of the arrows, even catching a couple in his cloak and breaking them in a show of his contempt of his foes. 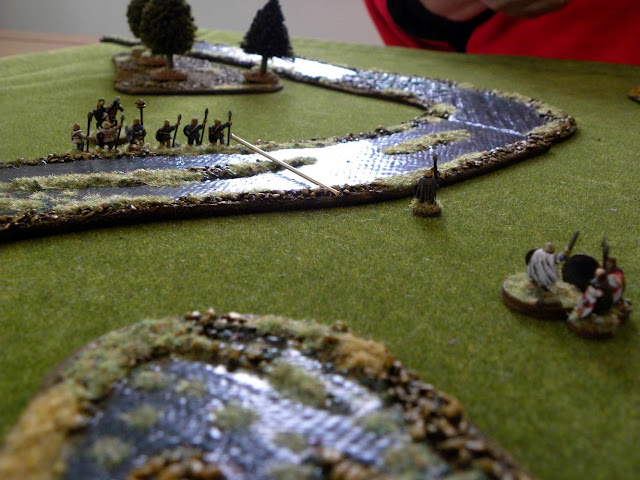 Aethelwulf beats back his opponents allowing Godgifu and the spearmen to cross the fast running river. Three of the brave Angles are swept away by the strong current and are never seen again. 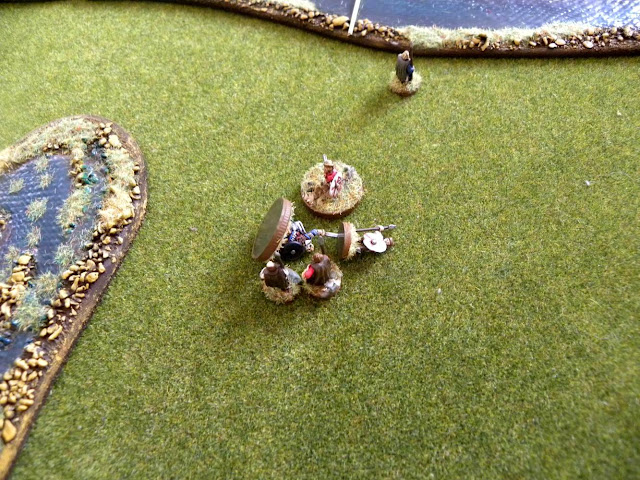 Constans joins the fight against Aethelwulf, beating him to the ground ... 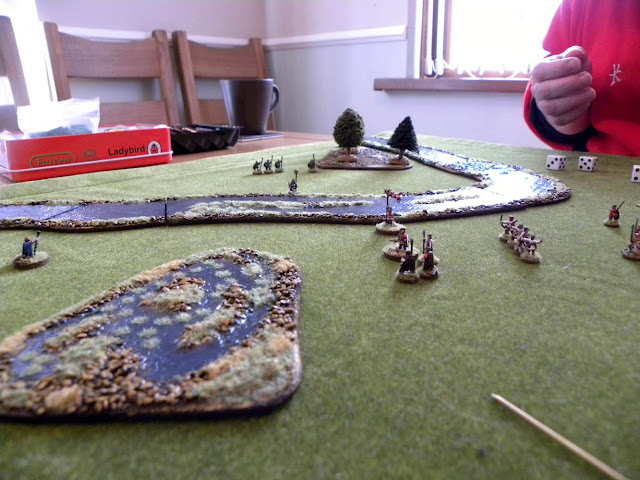 ... where his body is torn asunder by a hail of British steel. Constans ripps the Holy Relic of St Pius from the Anglian warlord's corpse and raises it high as a physical symbol of his own piety. Calpurnius Draco dispatches the last Anglian spearman this side of the river and Sigtrygg makes a run for it away from the enroaching enemy. Meanwhile the British archers turn their fire on the fleeing Angles beyond the river pinning one of them (rather permanently) to the ground with a well placed shot and unhorsing Godgifu with another. 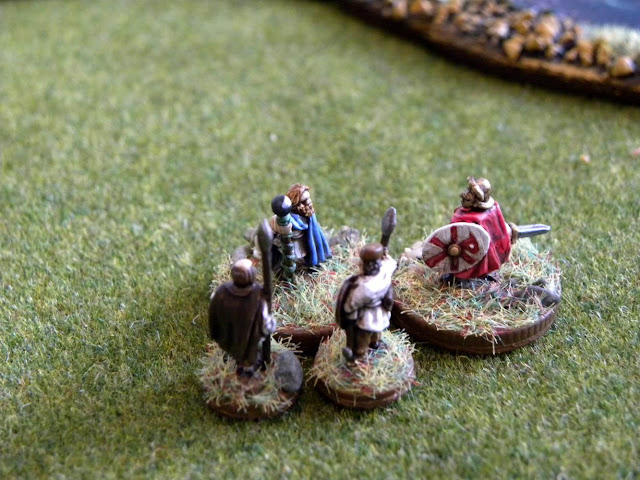 Before he can make it to the river, Sigtrygg is caught by Constans and his lads. He turns and faces his destiny, bravely holding them up while the remaining spearmen make good their escape. The last they knew of their scald was a flurry of British activity and a stirring baritone lament cut short half way through the second verse... 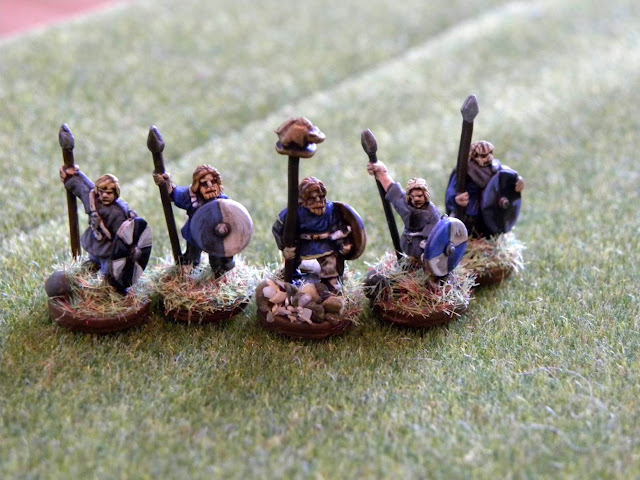 The only survivors of the Angle-apocolypse. Perhaps the Anglian champion will one day be able to make a name for himself and attract more followers but for now, the power of the Angles in the land of the Belgae has been broken. The battle at Constan's Ford will, for generations, be a byword for British resistance and general ballsiness.