Something wicked this way comes...

Introducing the third of my warbands for Ganesha Games' Song of Blades and Heroes - The Shaman of the North. 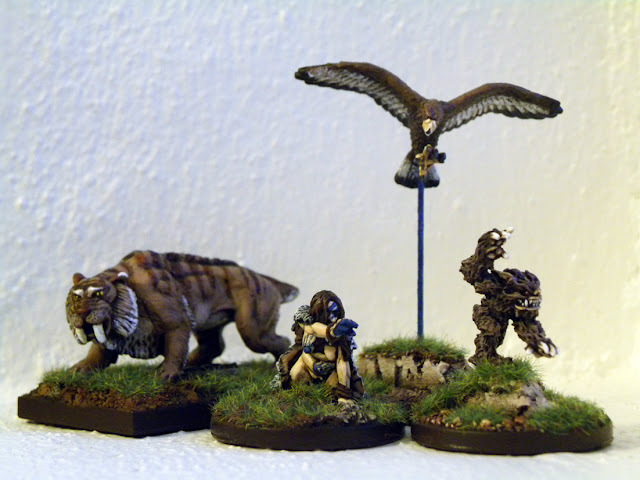 This band of northern wanderers have come south to match their savage power and arcane knowledge against the civilised (black powder wielding) folk of Ballybogside and the Grand Duchy of Cheddar.

Loosely inspired by Shakespeare'sGorgon miniatures. Her reputation as a crazed witch warrants the application of magic user and terror special rules while her physical ailment slows her down to short movement. 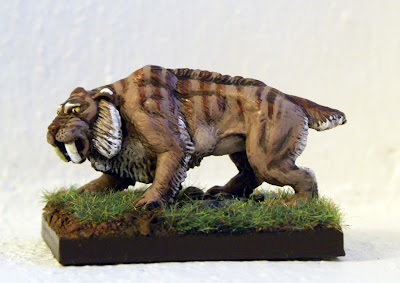 The Sabre-toothed tiger (smilodon fatalis) combines the ambushing traits of a big cat (stealth, opportunistic, dashing) with the size to bring down any opponent. The model is by Reaper. 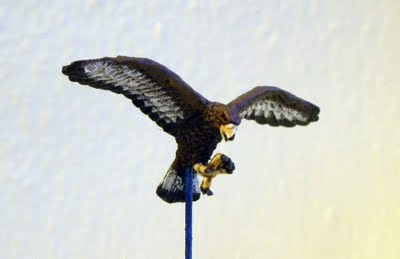 The Golden Eagle is the lord of the skies in the wind-swept north. He is based on the base stats for an eagle provided in the SBH supplements, with the addition of the running blow trait. The eagle is a 10mm scale giant eagle by Eureka.

The feral peon is Sycorax's favourite minion. He is slow to spring into action but always eager to rip into all who oppose his master's wishes. The wonderful sculpt is a Wendigo by Malifaux.
Sycorax and her warband have not yet been tested in battle, but will shortly be added to the running set of honours found at the 'SBH warband battle honours' page --->HERE 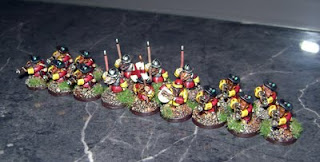 In other news, following their 9th successive defeat, the Duchess of Cheddar's Own Companye of Foote has been disbanded. The best ratmen have been recruited into a new elite companye led by the dashing Captain Erasmus Sedgemoore van Squeek. Their warband roster will shortly be updated.