Within mercantile cities like Beerenburg, the various merchant guilds hold a great deal of influence, effectively opperating self-regulating districts and electing the burghers who decide foreign policy. During times of war, each guild is called upon to provide guilder battalions - or pay for mercenaries to march in their place.

In Beerenburg, no guild is more powerful than the Honourable Company of Brewers; their battalions of archer, bedecked in the guild's iconic red and white, are staples of the citiy's militant ventures.

This three-company unit - built for Fantastic Battles as a formed company with the militia racial trope and skilled shooting trait - is made up predominantly of TAG halflings. These are joyous figures with a great range of different scults that are just packed with character - the halfling giving the two-finger salute is a favourite, but also the variety of sandwishes, apples on arrows and other appropriate accoutremonts. For the Brewer's Guild I put as many drinking references as possible into the unit (and a wee B on the shield of their standard).

The read of the figures are also awash with foodie goodness ranging from carrots and cheese, to grapes, raddishes, sausages, bread and pastries. 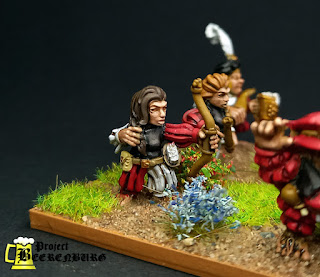 As well as the endemic rats from Anvil Miniatures, I also added two Duncan Shadow 3D printed female halflings (printed 17mm to the eye to make them more compatible). They are not a perfect match - their floofy fripperies are not quite a flouncy as the TAG halflings, and they are much slimmer in general - but they will hold the line just the same.
No comments:

This is Not a Test - Keeping the Peace 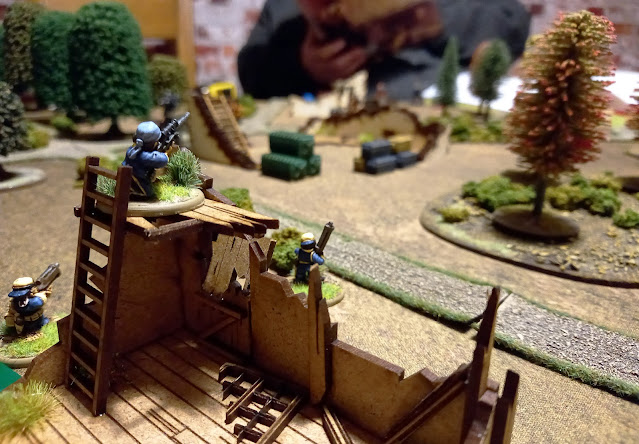 Engagement eight of our This is Not a Test campaign saw the Flores Minor Ranger Corps venturing back into the northern greenbelt. There, while salvaging barter script from a ruined settlement, they came across an unknown warband approaching the settlement from the opposite direction. 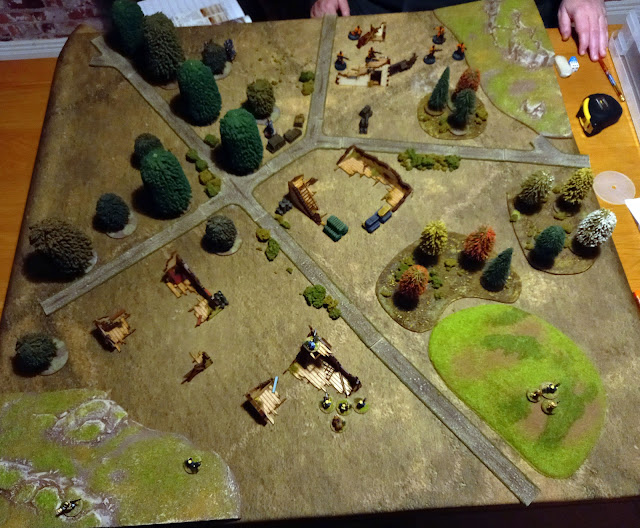 Roger joined the campaign with a new Peace Keeper warband. While the FMRC (deployed along the lower edge of the table) are led by Sarge, a road marshal, Roger's Sons of Morpheus (deployed along the top) were led by Ice T, a hanging judge. The two crews are therefore very different in make-up. Roger's starting crew had the leader and three elites supported by three sacrificial lambs. To balance out 270+ difference in warband values, he took the 'Grin and win' and 'Really good luck' strategies as well as three further sacrificial lambs as supports. 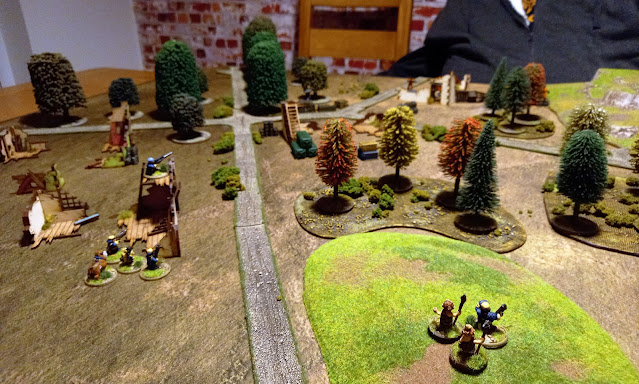 The FMRC took up position with Buckshot, Frygga and Ogg on the right, Demo, Point, Snake-Eyes and Pup in the centre behind Hotshot, while Doc, Heavy and Sarge deployed on the left where they had sweeping views diagonally across the settlement. 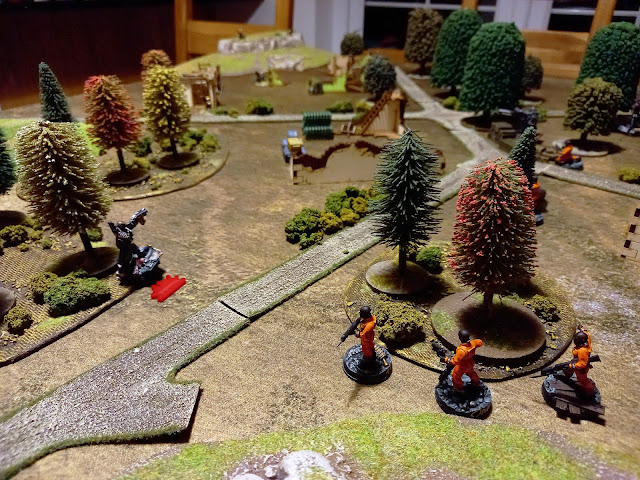 Ice T and the swarm of sacrificial lambs deployed on Roger's left (opposite Backshot and the hillfolk), while his three elites deployed on the right. The hanging judge led the lambs forward but attracted a lot of fire for his troubles. Heavy, Doc and Sarge all fired away, causing a wound, but their shots otherwise pinging off his rock-hard abs. 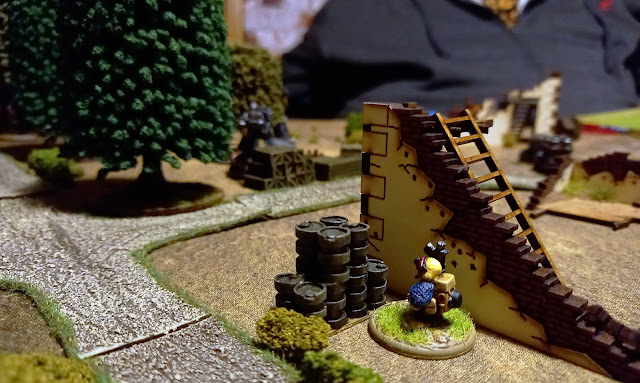 In the centre of the settlement, Point and Hotshot were both taken out of action by Roger's quartermaster's minigun in a hail of lead, but then he and his backup both jammed their guns. Demo skulked up to lob a grenade but, again, the bogeys were too hard for it to have any impact. 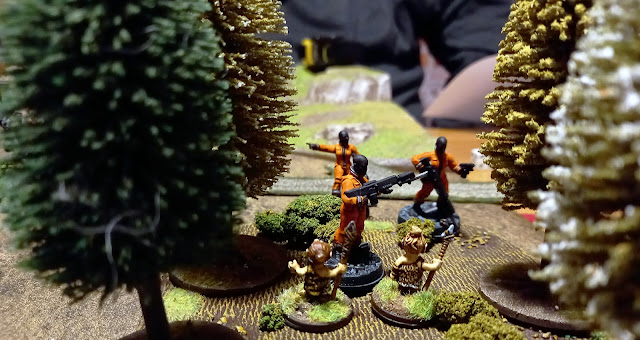 Back in the scrub on the right, Buckshot tried unsuccessfully to take out Ice T with further shotgun fire, while the hillfolk took the fight to the sacrificial lambs. Over in the centre, Roger's crew were pinned down by a lot of fire so he took the nuclear option and started detonating the lambs. One took Ogg out with her, but otherwise there was a lot of noise but little impact. By the end of turn four, Roger's crew were reduced to less than half their starting number and he bottled, leaving the FMRC victorious.
In the post-match sequence, it turned out that all casualties were able to recover - except the sacrifical lambs of course. Ice T's crew all scored additional experience (from their 'Grin and win' strategy) and scrounged a huge pile of barterscript - half of it recovered from a toilet...
For the FMRC, Point found tunnels that will allow him to act as a ranger for the next two engagements, while Buckshot found a COG Bunker. Despite his banged head, he managed to break in and 'redistribute' an actuated gauntlet - I'm sure that will come in handy!
2 comments:

Email ThisBlogThis!Share to TwitterShare to FacebookShare to Pinterest
Labels: Sci-Fi, This is Not a Test

I'm please to be able to show off the first two characters for my Fantastic Battles Halfling burghers, a troubadour and a meister. 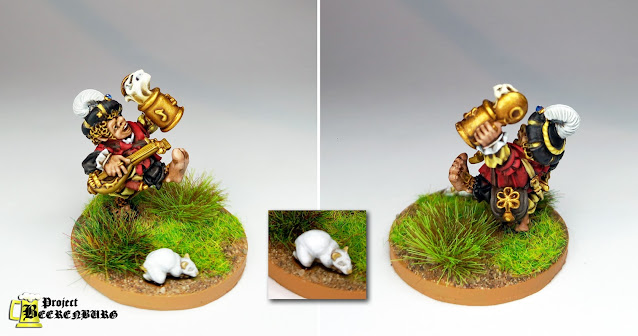 I will be using the this charming halfling bard/troubadour from The Assault Group (TAG) as one of the army's magic-users, dishing out plenty of empowering songs to embiggen the tiniest of of swords. Another Anvil Industries rat makes an appearance, this time though he's a white rat who can serve as a familiar (if required), enabling the troubadour to both move and cast in the same activation. 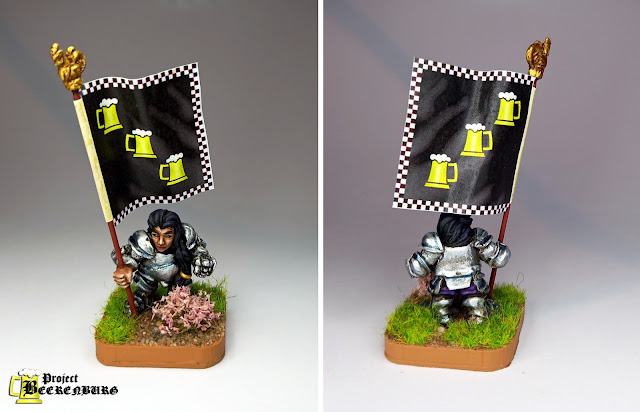 The second character is one of the city's meisters, or in this case, a meisterin. Bearing the Three Pints banner of Beerenburg, she will serve as one of the army captains. Her body is a plate armoured dwarf from TAG (more of those to come!), with the head of a Duncan Shadow 3D printed female halfling bedded in with some greenstuff hair. The banner pole is steel rod with a TAG halfling hand and chicken/aquila - the flag itself was designed in Photoshop and printed out.
Next up will be the first guild unit, so it may take a bit of time!
1 comment: 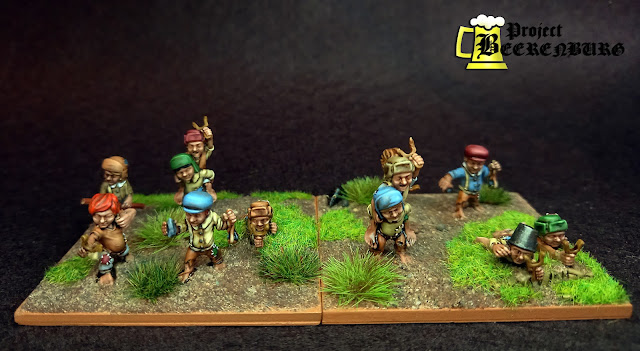 Kickstarting my new 28mm halfling army we have a two-company unit of urchin slingers. Every mercantile city-state needs them! In Fantastic Battles, these will be profiled as irregular companies with the 'shooting' and 'skirmisher' traits, along with the 'militia' racial trope. Not exactly what you'd call heavy hitters, but certainly a handy support unit. 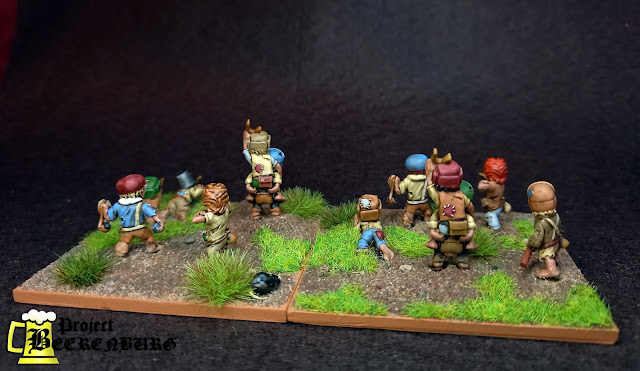 I wanted to keep them very drab to contrast with the brightly coloured guild units, but not so drab as to leave them dull and boring. Hopefully they hit the spot. The fantastic urchin miniatures are from TTCombat and the wee black rat (ubiquitous in a trading city and the first of many in the army) is from Anvil Industries. 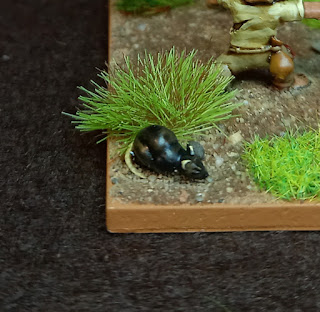 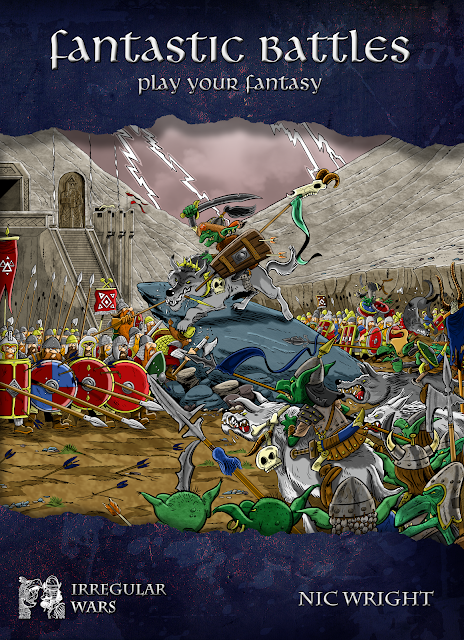