Continuing on my slow plod towards raising a couple of Dux Bellorum armies, here are a couple of shots of my Germanic foedarati shieldwalls that will bulk out my Romano-British infantry. Although my Romano-Brits will have an overall red colour scheme, I have made these guys blue to a) distinguish them as 'different' from their comrades, and b) in case I decide to do a fully fledged Saxon army in the future, they will provide me with a core.

The shieldwall on the right is my SAM Anglian warband rebased. All figures are Pendraken from their Late Roman range and include figures from both the Saxon militia and Roman militia packs, led by characters from the Arthurian personalities pack. One Saxon has had his spear replaced by a boar standard. I will used them as a regular shieldwall.

The shieldwall on the right is made up principally of Pendraken Norse figures and include a mix of berserkers, bondi and hirdmen. The command are made up of a late Roman officer converted to hold a severed head, a late Roman standard bearer (standard inspired by the Sutton Hoo stag sceptre), and the same character from the Arthurian personalities pack who leads the other shieldwall, accept with a bit of conversion work. Riding along the back of this unit is a Saxon priestess - really a converted sorceress riding a unicorn by Eureka. I'll use this unit as a noble shiledwall.

For some time now I have been pottering away building and painting a 6mm army for a friend of mine. When he was looking over the list of powers that might get involved in our c.220 BC theme for Hail Caesar, he decided that the crumbling state of Sparta was going to be the faction for him!

Now in theory, this is a fantastic period in Spartan history with fascinating personalities, social and military reforms and the joy of watching the driving ambition of a third rate power trying to regain it's previous ascendancy.

In practice, after the reforms of Kleomenes III in the late 230s and early 220s, there are a whole lot of pikemen. I didn't really think about this before I started the painting project, but by golly (after painting eleven units of the buggers) I realise it now.

Using the existing Classical Greek and Hellenistic Greek army lists as the basis, we did a bit of research and came up with the following specifically Hellenistic Spartan army list. There is still a bit of a dispute as to how widely the Steady rule should be applied to the phalangites (I say not at all, he says all except the ex-Helots....). In due course we should probably add a little medium and/or light artillery too. 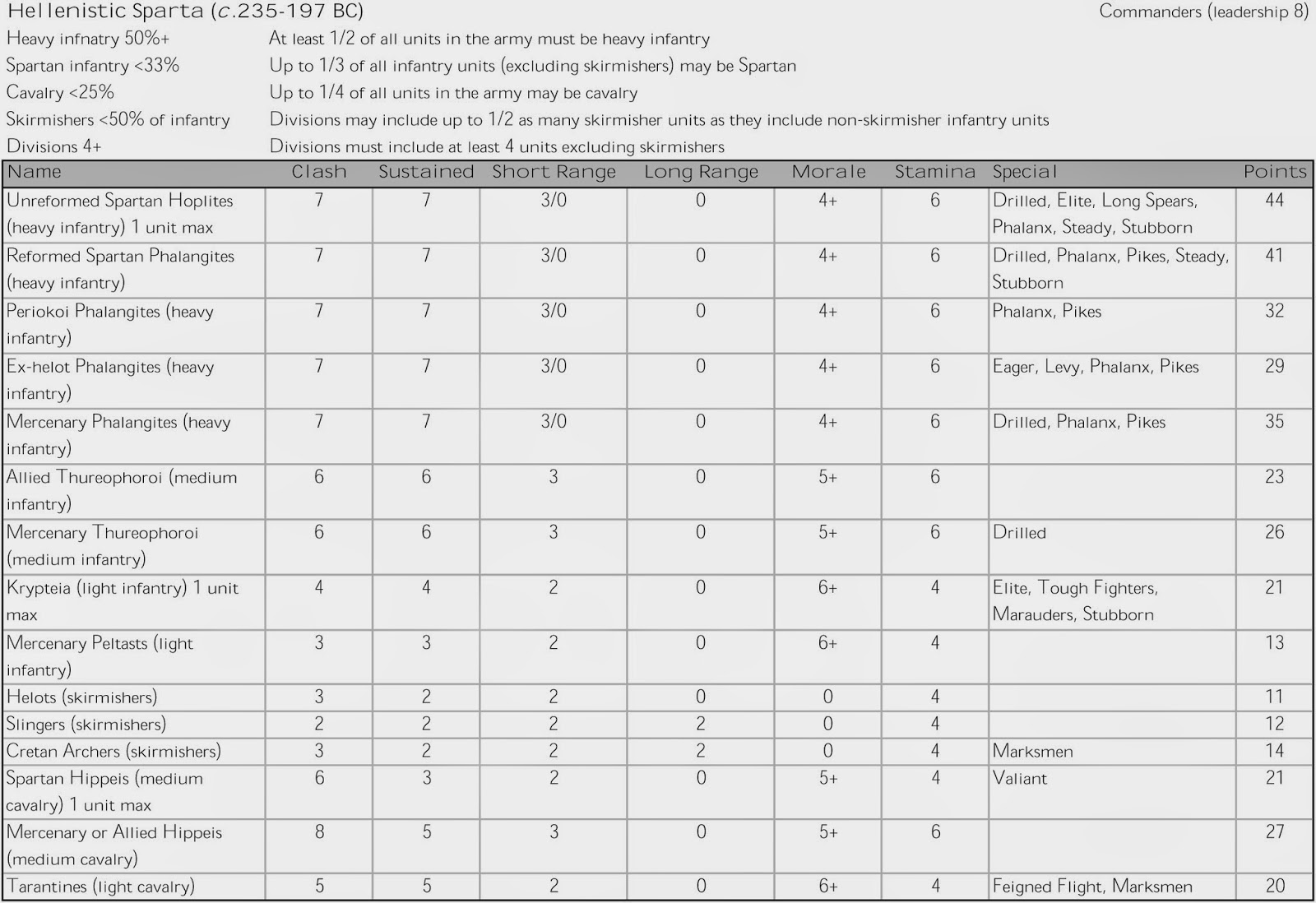 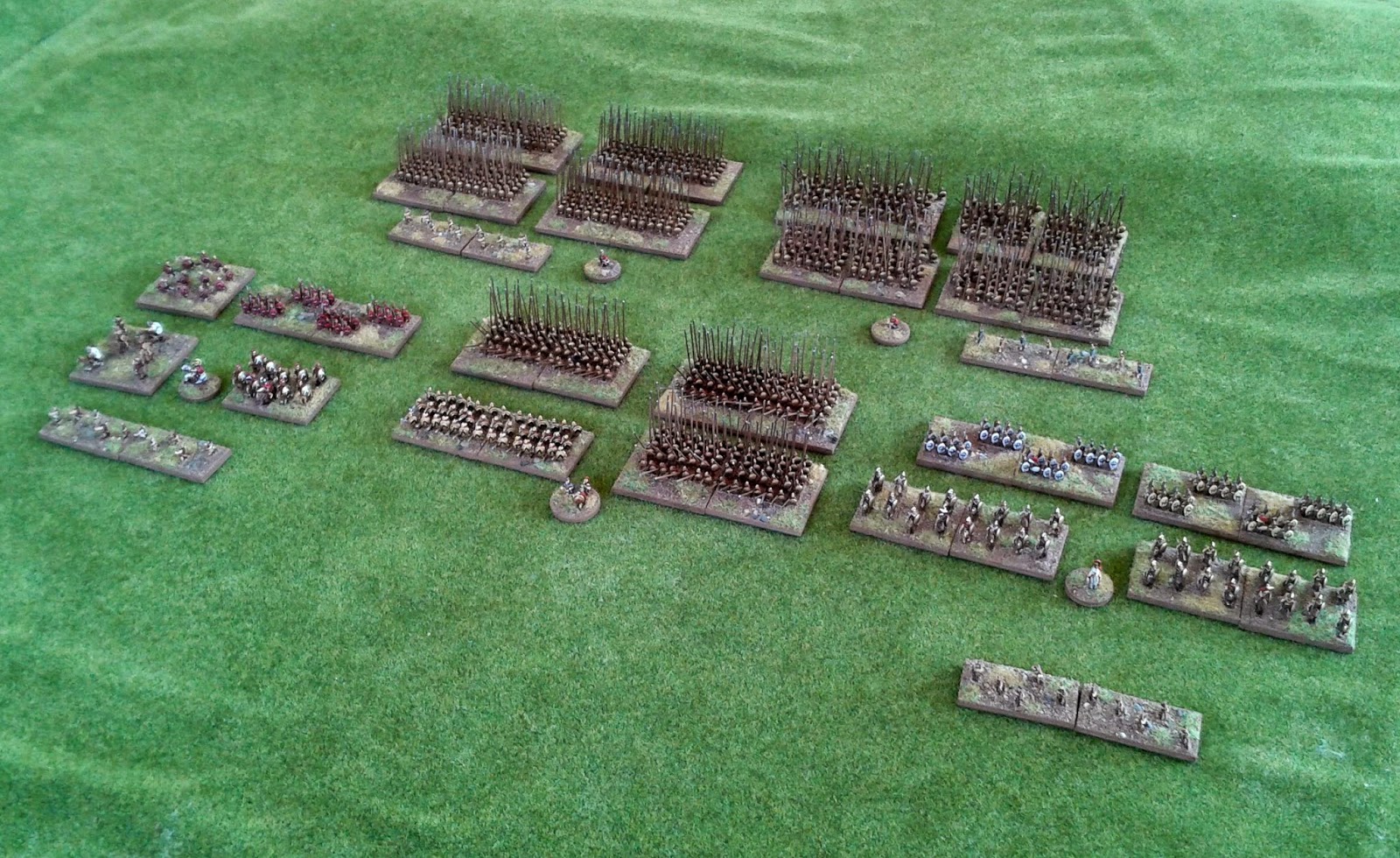 Here is the army as it currently stands; it is about 660 points worth but I believe there will be some additions to it in the future.

King Nabis and the Spartiates. These are, as we would say, the 'clever lads'. There is a single unit of unreformed hoplites and three units of reformed Spartans equipped in the so-called Macedonian Fashion. 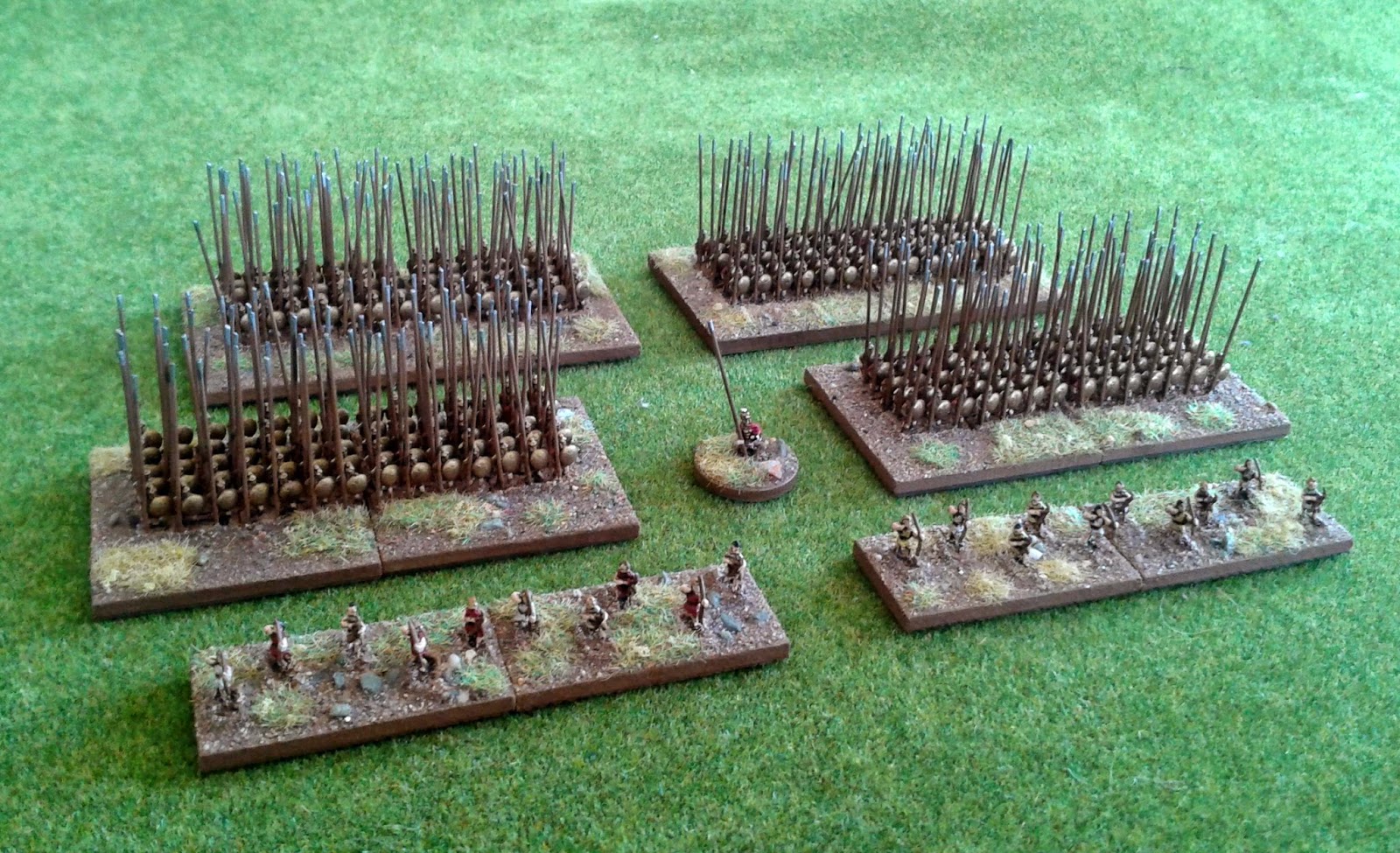 A division of Periokoi (those who live around) pikemen with some Cretan archers in support. These lads could equally be used as mercenary pikemen. 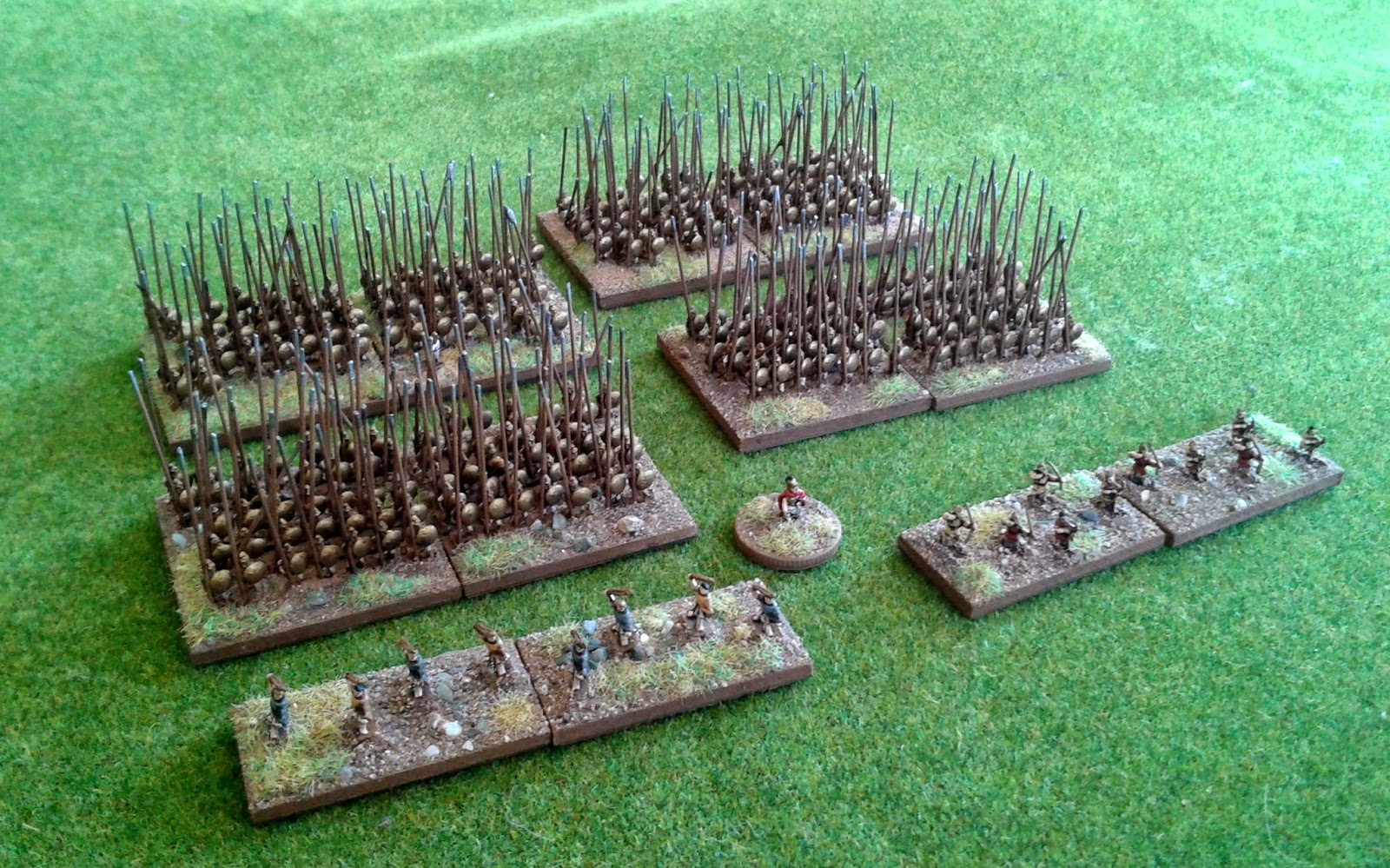 A division of ex-Helot pikemen with some more Cretans ans some slingers in support. These units have been raised from recently freed Helot serfs and while they can still hold the line, they are not as well trained as anyone else in the army.

This shot is the show the distinction between the three grades of phalangites from the rear. The Spartans on the left are tightly packing into their formation, they are dressed in a uniform red and have the first two ranks have their pikes angled at 45 degrees. The Periokoi are also well formed but have all of their pikes upright and have a random mix of red, white and yellow chitons. The ex-Helot pike blocks are much more disheveled with pikes all over the place and a mix of brown, white and grey tunics. 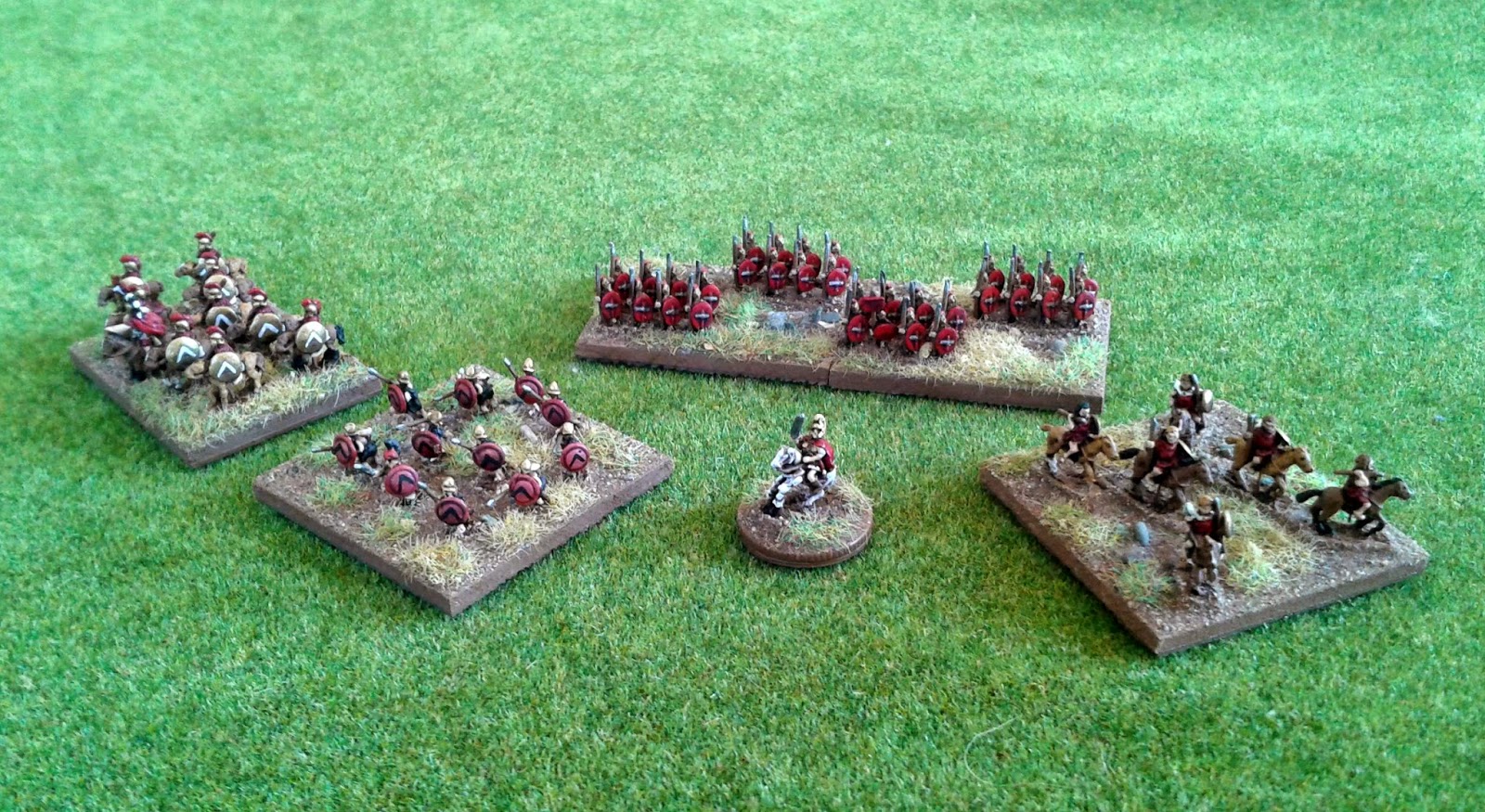 This division contains the noble Spartiate hippeis and the kryptaia (Spartan gestapo), along with some Tarantine mercenary horse and some mercenary or allied thureophoroi. 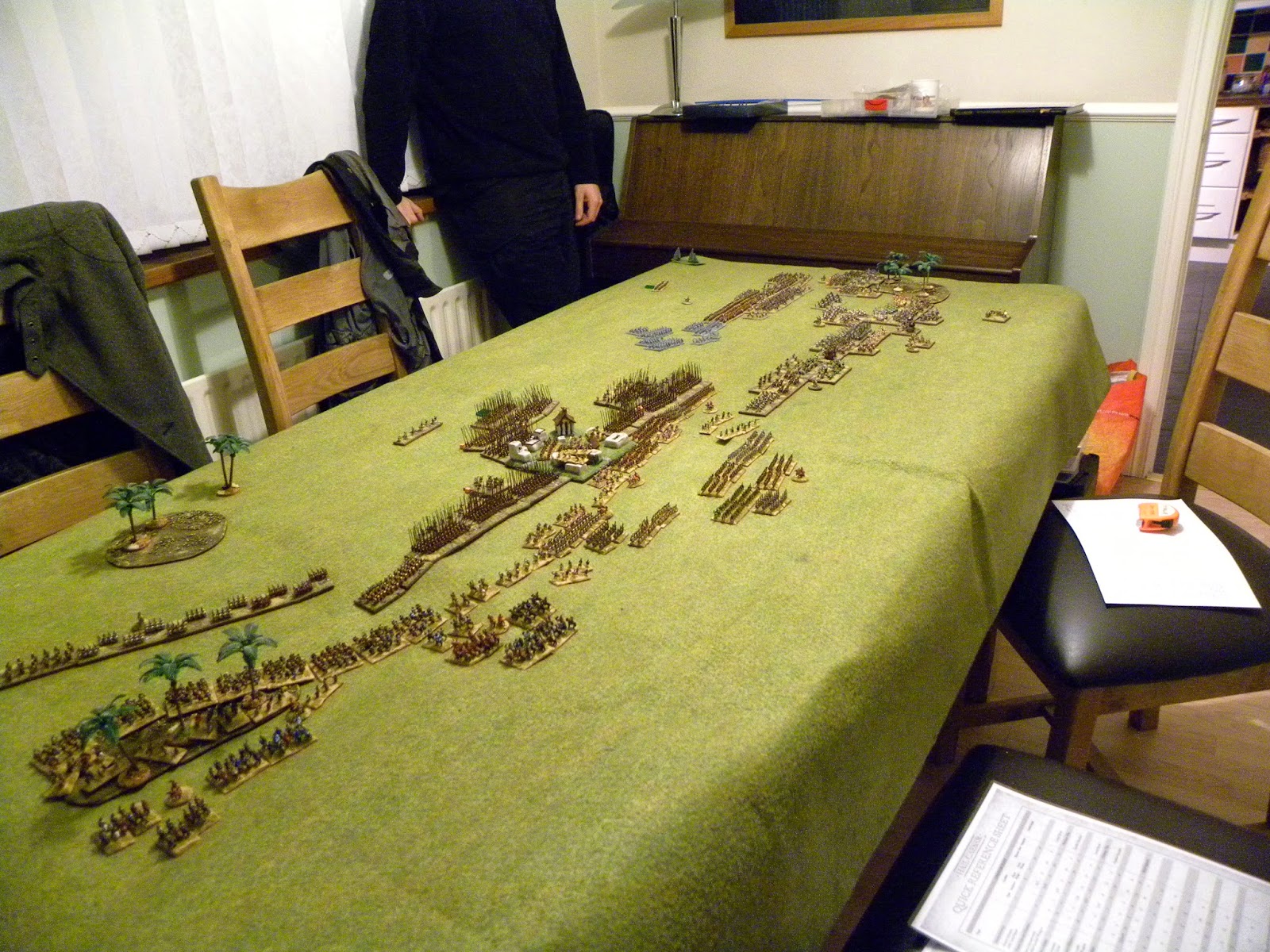 ... And in a fit of madness we had a four player game last night where we all deployed everything we owned on the table Sparta and Carthage vs Rome and my Seleukids. There must have been about 3,000 points worth of units on the field. I'll not pretend we finished that game but it was a whole lot of fun.