Every year, my local club, the Southern Battle Gamers <location HERE> run two DBA matched pairs competitions plus the MOAB two day event, all hosted by Mr Steve Webb. The first of this years copetitions will be on Sunday 4th March. The following notice is re-posted from Steve's announcement at the Southern Battle Gamers website <original HERE>.
To be played on Sunday 4th March and Sunday 5th August, from 10am until completed.
Do you have what it takes to become the latest Imperator?
That's right, the winner gets there name added to the Trophy listing the Southern Battle Gamer's Imperators. Join Mark Stevens, Nic Wright and myself.
Each competition will consist of five rounds.

Each player will provide two armies that are historical enemies as per the v2.2 lists, preferably balanced. You will note that this allows you to bring two armies of any figure size and any base size, as long as both are the same.
Players will be ranked during and at the end of the competition by their number of wins, then their number of points as below:
Each round will be completed in one hour plus the current bound. Points will still be awarded for uncompleted games, but neither player will be awarded the win.
The draw will be a modified Swiss draw, with the first round ranked as per the results of all previous competitions run by myself. Any new players will be ranked last in order of arrival. If a bye is required, the player for the bye will be the lowest ranked player in each round. A player will at most have one bye during the competition.
The choice of armies will depend on the following.
The rules used will be v2.2. Armies that have elements that are able to dismount, during the game, can only do so during deployment. If an army has options, these do not have to be revealed until they are deployed.
If you do not have a suitable pair of armies, or only have one army, either myself or another competitor should be able to help you out by loaning one or two armies.
Entry will cost $2 for members and $7 for non-members.
No comments:

Email ThisBlogThis!Share to TwitterShare to FacebookShare to Pinterest
Labels: DBA

A couple more work-in-progress shots of my first HotT army, the Grand Duchy of Cheddar.
First up we have further shots of the Ducal dirigable - now with most of the paintwork done. Michael Awdry enquired after its steerage - I can assure him that it is steered by the balloon fins and moves according to the wind (which may or may not be magic). I was considering attaching a propeller and/or rudder systen at the back of the boat, but it made it too large for the balloon. 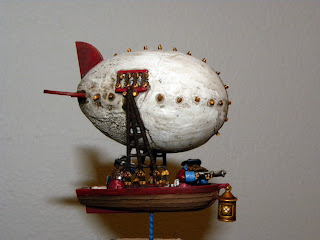 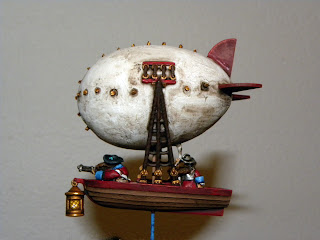 The regiments of foote, van Squeek's (the whites) and the Duchess of Cheddar's (the buffs). 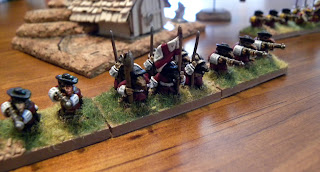 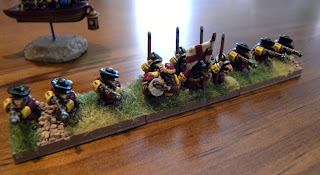 Lastly, the first shot of Cheddar Hall, one of the entrance halls to the Ducal palace-warren which emerges from a hill side. Scratch built from thin mdf on a cork-tile hill side. 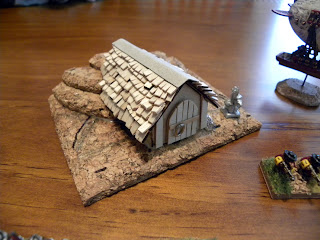 An hour of stolen sheep and shattered goats (and a Happy New Year!)

By way of a selfless act on behalf of Mrs Dux Homunculorum, Alan (the Dux) was able to travel south last week for an afternoon of gaming. We started with a game of Irregular Wars, playtesting one of the scenarios that will (in the not too distant, but not too close, future) make it into the second edition of the rules.
We tried out the 'Reive and retrieve' game, finally putting my sheep to pasture (and on the table). The Dux (the attacker) brought out his Lowland Scots, while my Royal English were the defenders. A flock of 1d6 livestock (I rolled a four) were deployed between the lines. We had ten turns in which I had to try to keep my sheep out of his thieving hands. The sheep, however, were moving impetuously and not really subject to orders unless being herded by a dedicated company of the Queen's men.
It was great getting the game in, and we discussed a lot of different suggestions to make the scenario work smoothly. Looking back at it, there are many different approaches I could have taken to give myself more of a fighting chance, but the Dux blocked my mounted with a wall of pikes and rode off with the booty. An enjoyable game that I'd certainly like to try a rematch!
****
We followed up our test scenario with a quick game of Song of Blades and Heroes by Ganesha Games. It was a good chance to give the Dux an intro into the game using a quickly created Viking warband, and for me to finally put my Arkadians in the field. I didn't get around to taking any pictures of the game, but lifted the following photos from the Dux's blog (HERE). We played a simple pitched battle, delving deep into my scenery stores to come up with a pretty weird battlefield on the cusp of Alpine-esque chalk downs and arid desert.... Anyway, the Dux sums up this game pretty well on his blog:

"Despite Olaf the Unsteady being knocked over at one point by Pan, pragmatic Norse steel soon prevailed. Of the satyrs who legged it, one returned just in time to get axed, the sight of which again appalled the survivor to the extent that he took to his little goaty heels. I must confess to feeling a certain amount of guilt about the dryad."
I decided as a result of this game, that having a Terror-causing Hero with Q:3 and C:3, is not a good combination. Have a look at the SBH battle honours page (HERE) to see Pan's new incarnation. 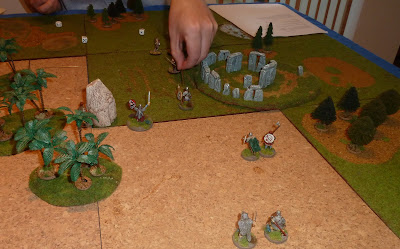 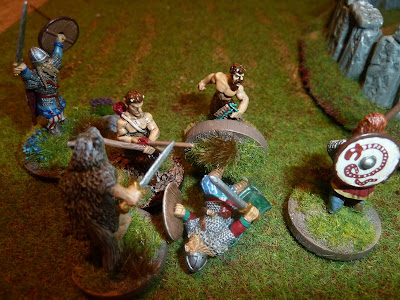 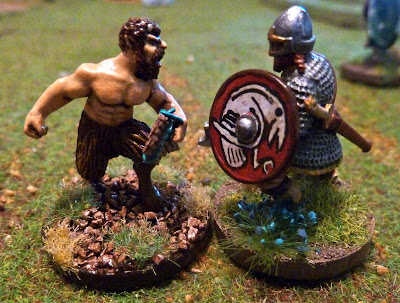 So all up, a fairly poor old show for an afternoon's light gaming. Two defeats. One, of a game I designed, and another of a game I play a lot against a new-comer. Nevermind, both my English and my Arkadians will fight again, and then they do...
1 comment: