The woes of inter-hemispherical wargaming...

The Somali pirate captain, or HM's customs, or whoever it was who has been 'minding' all our stuff for the last five months, finally deemed fit to have it delivered to our temporary accommodation today. 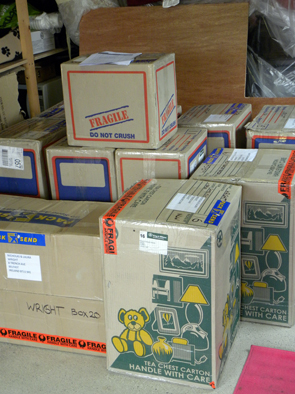 "Huzzah!" Says I. But then I thought to count the boxes... Two boxes missing.

So, I opened the box with great haste, mixed with just a tender amount of trepidation. You see I was keen to see all my wee lads (and ladies) again after all this time. I had grand plans of using them to actually play some games; get though AAR's up on the blog and have some fun. On top of that I wanted the rest of my scenery and access to my collection of static grasses.

However. What I saw when I opened the boxes and removed what I had believed to be adequate packing materials, my poor little heart died a little. I have to warn any of you with a weak stomach to turn away now and stop reading.

The pictures below are quite graphic. 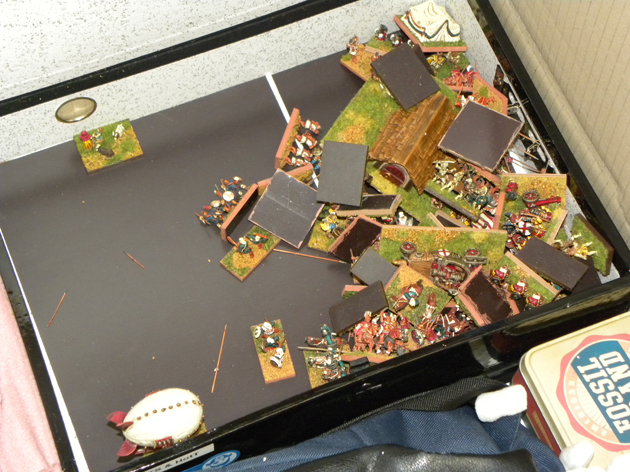 My DBA based ancients, and those poor wee HotT rats from Cheddar... 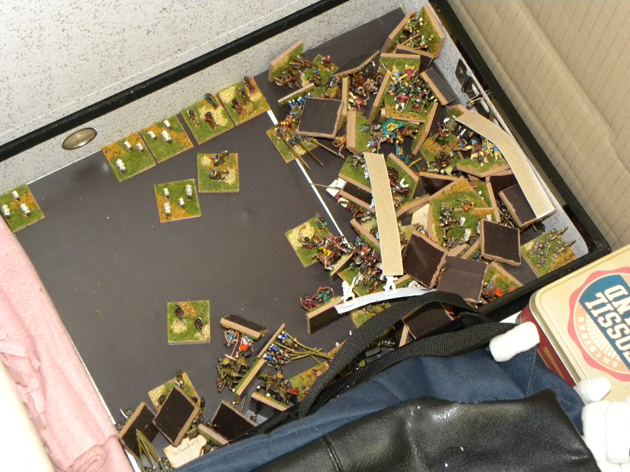 Five armies for Irregular Wars: Conflict at the World's End. Their resolve gone, their hearts scattered.

Now, I realise that I should have packed everything individually. But they were magnetised down with packing above, in boxes which I was assured would always be kept right side up. I was very naive - but then we hadn't the space to bring these really, let alone wrapping them up and creating more volume. 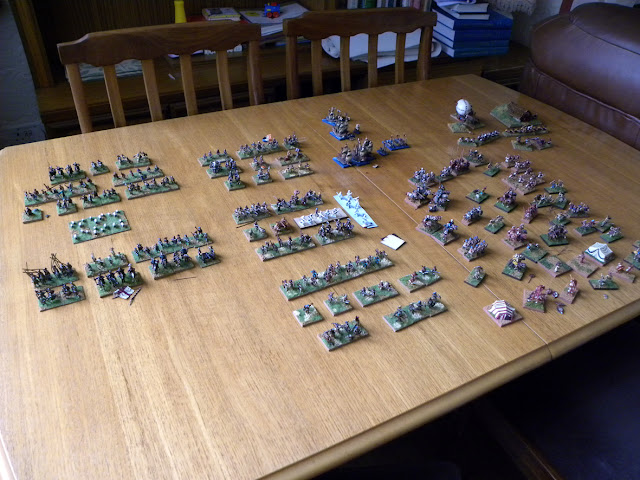 So sadly I unpacked everything on the table to take stock of the damage. The Cheddar rats had only received a very slight scuffing, two small breaks, some bent spears and a few scratches. My ancients stuff is a bit of a write off. Most spears off, most riders off, many shields off, lots of scratches. Some will be paint stripped and started again, probably based on 40mm square bases(...).

Some will make its way to a fire sale. There are some bits that I just don't want to have to deal with.

Most of the 1:1200 ships came off OK  most of the flags are broken and a few sails knocked off. Haven't decided yet whether to fire sale them or try to eventually persevere.

Irregular Wars armies had a mixed success. Lots of broken or bent pikes. Lots of chipped paint. Not too many things that are that serious, but each army will be quite a project to restore. I will certainly set to work (once we move, so still several weeks off) fixing up the Hollanders, Spanish and Caribs. Haven't decided yet whether to sell the English and Irish to concentrate on a New World theatre, or to just leave them till last in the fix up stakes.

Either way, I have a rather long, lonely and depressing journey ahead of me. And just when I thought I had finally arrived.
11 comments:

Having been down with a nasty head cold and having nothing better to do (except buy a house – more on that anon), I thought I might dabble with the idea of a period variant of the Irregular Wars: Conflict at the World’s End v.1.5 core rules system for the Greek world in the fifth and fourth centuries BC. This is in parallel to, and in no way enforces itself upon, the play-testing being carried out independently in . Rather, I just thought I’d sit down and see if it was really that easy to adapt the rules to a whole other period. The answer was a resounding yes. Below I have indicated a few additional special rules to give a touch of period flavour, followed by a number of suggested army lists. Obviously this is not a stand alone game but requires the core rules to play. Any third party thoughts are much appreciated, but with that thought I encourage one and all to go out and experiment!

Company base sizes
Although 30x30mm bases may still be used, all figure numbers below are suggestions for 40x40mm bases.

Shooting
Unless both players agree, there in no need to test for rain at the beginning of each shot phase.

As there are no black powder weapons available, all projectile weapons count as archaic.

Hoplites
Companies designated as hoplites are always considered to be on foot (F) but are to be treated as mounted  (H) for the purposes of breakthrough pursuits.

Any companies of (H) or (F) targeting either front corner of a company designated as hoplites suffer a -1 modifier to their shooting roll at short range and will require a 6+ roll to cause a loss of resolve at long range. Note that this special rule might also be applied other troop types such as Roman legionaries from the third century BC.

Reading the auspices
After deployment and testing for mishaps and disease, but before the commencement of the battle, both players roll 1d6 and consult the omen table below. Armies which include a company of priests receive a +1 modifier to their roll.

Greek Poleis
The hoplite based forces of the numerous Greek city states. With a few exceptions each city could call upon the same basic troop types. All Greek armies must recruit the listed compulsory companies. Their optional companies may be drawn from the generic Greek list of optional companies and/or from one of the city-specific lists below. In addition, the origin of the commander will impact on their initiative and command radius. Athenian commander (I:2, C:175 (7”)); Spartan commander (I:1, C:175 (7”)); other commanders (I:2, C:150 (6”)).

Thraco-Illyrians
The irregular Thracian, Paionian or Illyrian tribal groups of the central Balkans. (I:3, C:125 (5”)).

Satraps
The provincial forces raised by the Achaemenid kings and their representatives in . (I:1, C:150 (6”)).

Modifiers
a    +1 charge modifier.
b    Never suffer any movement penalties or melee penalties in woods.
c    +2 charge modifier.
d    Friendly companies never lose resolve as a result of seeing scythed chariots scatter.
e    May not pass through any rough terrain.
f    +12 charge modifier.
g    +2 modifier in any melee phase against mounted (H) engaged to their front.