On the recent occasion of gentlemen in bowler hats and sashes marching through towns across Northern Ireland (12th July), I took the opportunity offered to take a few days of work and have a small family holiday. Destination: Clew Bay. Now, I've been fascinated by Clew Bay for some time, principally as it was the home and stomping ground of one of Ireland's most interesting leaders - Grace O'Malley.

Grace O'Malley, Grainne Ni Mhallie or Granualie in Irish (1530-1603) was the daughter of the O'Malley chieftain Eoghan Dubhdarra and a contemporary - indeed almost an exact coeval - of Queen Elizabeth I whom she met with in 1593. From her family lands on Clare Island and the neighbouring parish of Murrisk (south shore of Clew Bay), Grace led a life of maritime trade and depredation (read piracy), travelling as far abroad as Spain and North Africa. Her major official source of revenue seems to have been the taxation of fishing fleets in Clew Bay and off the west coast, but she also engaged in the ferrying of gallowglasses from the Hebrides to Ireland. Her life has often been fantasised, depicting Grace as some sort of national patriot of Ireland or a 16th century Amazon - she is now even the subject of a Broadway musical! For a proper biography, I'd direct readers to one of the volumes by Anne Chambers. Even though she does a good job of trying to find the 'real' Grace O'Malley, its clear that she will always be something of a shadowy figure who operated outside of the norms of society.

Always intrigued by historical enigmas, I was very keen to get down and spend a bit of time in the area, soaking up a bit of O'Malley atmosphere. Mrs Hotspur was happy for a weekend in the country (and of course was also happy for some atmosphere) and the Young Hotspur, who can not yet talk, didn't have a say in the matter. Below are a few photos from the trip to give an idea of what remains to be seen on Clare Island. You can't really see it in these photos, but the abbey roof is covered in 13th century figural paintings. Really something to behold.

How to make the world in seven easy steps

If you will excuse the pseudo-blasphemous title, this is the first of a number of posts designed to document my current scenery-building drive. With our exodus from Sydney, I had/chose to leave behind my home-made modular terrain boards. The bulk of my hills, the trees and a few other scenery pieces were packed on the boat, but the boards themselves were a bit bulky and heavy for the boxes.

This loss allowed me to rebuild my scenery collection anew (ala Neronian Rome or London in 1666). Rather than modular boards, this time I thought I'd make up a single grassed battle table, with a variety of moveable scenery pieces that I could use for all my games.

As a first step was the procurement of some 3mm thick mdf to make the scenery pieces. B&Q didn't have any in stock, so I settled for hardboard. This won't have as clean edges as mdf, but as I plan on sanding the edges and then sealing it all with PVA, this stuff should be fine. I then set about marking out templates on the wood - in pencil first and then in marker. I made sure that the different pieces would all be appropriate for 10, 15 and 28mm scales - partly by flicking through regulation sizes in different rules systems, and partly though playing with my miniatures on the templates. The terrain to start with will include:


Also in my buying frenzy, I picked up some 10mm buildings from Baggage Train to serve me in both my (growing) SAM-in-10mm project, and to serve for structures in Irregular Wars. It's ammazing how slowly Gaelic Irish architecture developed between the 4th and 17th centuries...

The last six weeks have been very hectic with work, but I hope to get started over the weekend with some cutting (step two)!

On Sunday I managed to snatch a couple of good minutes to borrow a jigsaw and cut out my hardboard terrain pieces. I didn't have the forethought to take pictures of the momentous moment, but I can assure you it looked something like this: 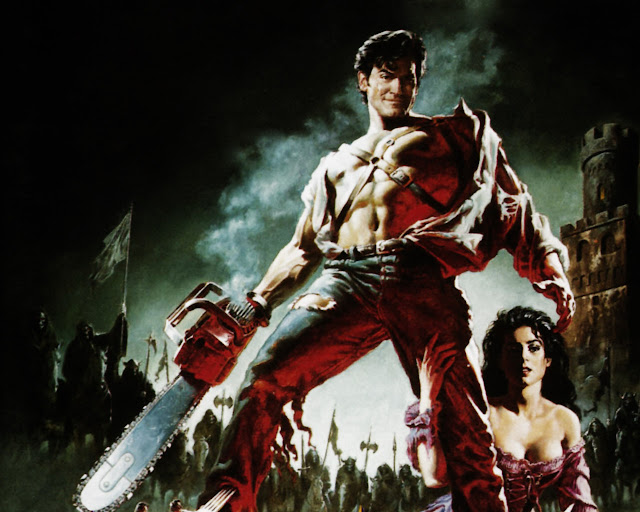 After the cutting, the edges of the hardboard were truly rough and so they needed a good sanding. This had the added bonus of slightly bevelling the edges so the terrain pieces wont sit quite so proud above the table. At the end of step two, the pieces looked like this: 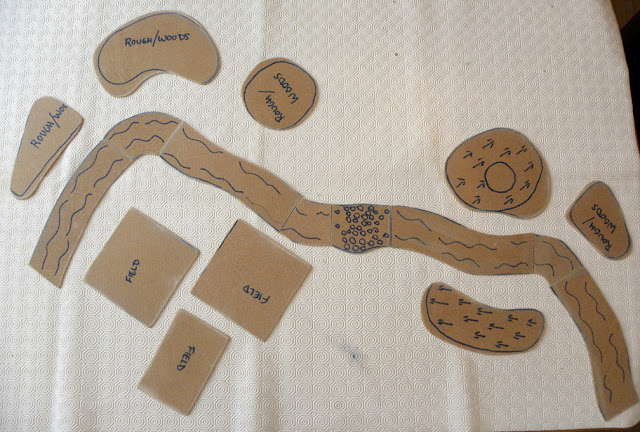 Step Three: Texturing and Base Coating

I'm not yet sure just how I will fit this exercise into the requisite seven easy steps, so please do bear with me if some are more involved than others. For the nominal third step, I wanted to apply a base texture to the pieces which will give a bit of form to the landscape and later be highlighted. With the bulk of my flocks and basing materials still on the boat, I made use of some beach sand and tiny pebbles skilfully appropriated from the ROI by the Young Hotspur during our recent holiday. 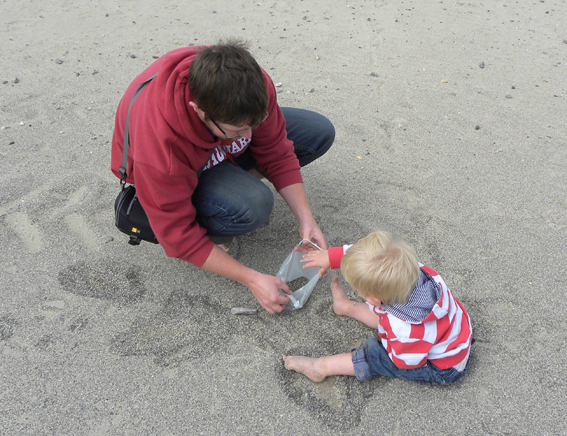 This was applied to the hardboad with pva in diverse and interesting patterns thusly: 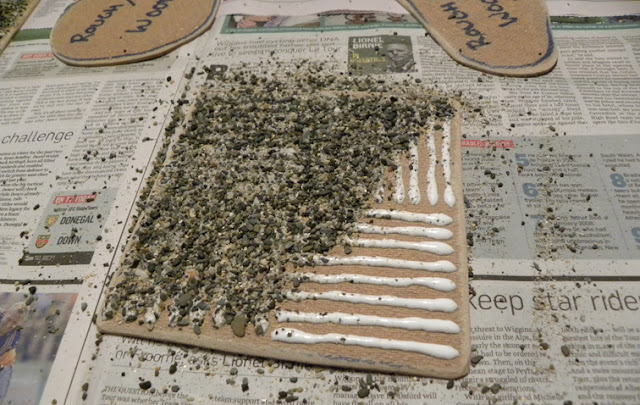 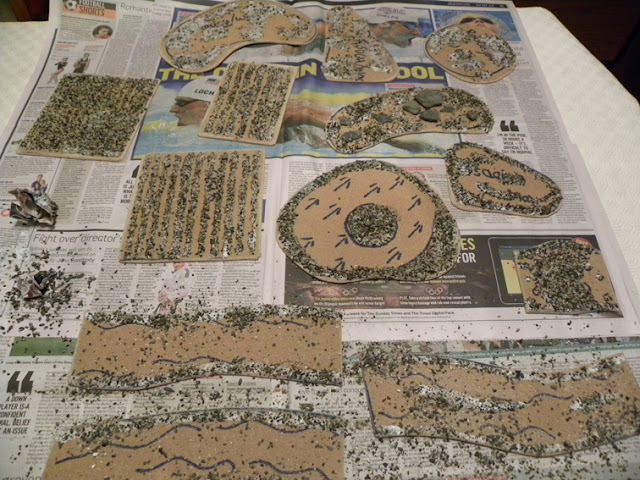 This evening, the whole lot was then spray painted a nice rich, fertile looking brown, ready for step four. 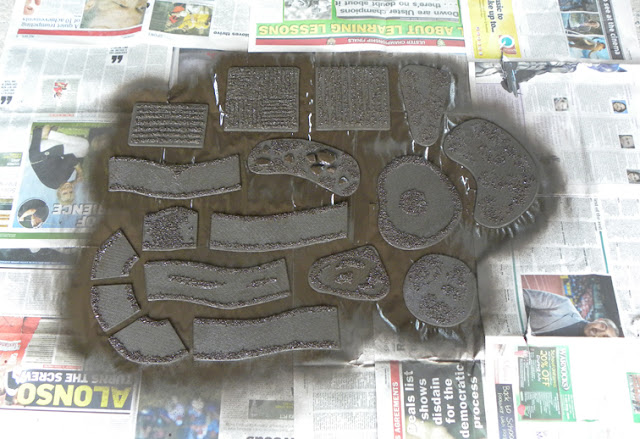 Taking a much lighter paint, my lovely assistant and I then roughly dry-brushed all the surfaces of the terrain pieces before using a dark blueish-green to mark out watery areas in the river segments, lake-cum-swamp and one of the other swamp pieces. The larger rocks on the rough-cum-moorland were picked out in grey and highlighted and a few small pieces of flock were added to that piece and the rough-cum-woods to see how the colours all worked together. 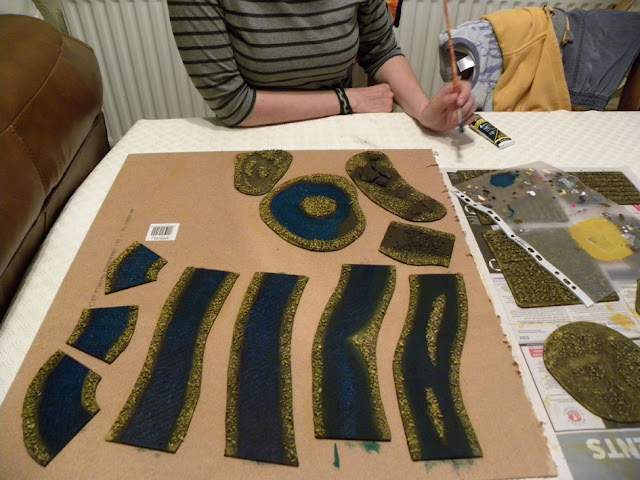 The ford river segment was dry brushed several times to give the appearance of water rushing over stones, with brighter white at the first point of contact (to the right below) and more white water trailing off to the left of the ford. 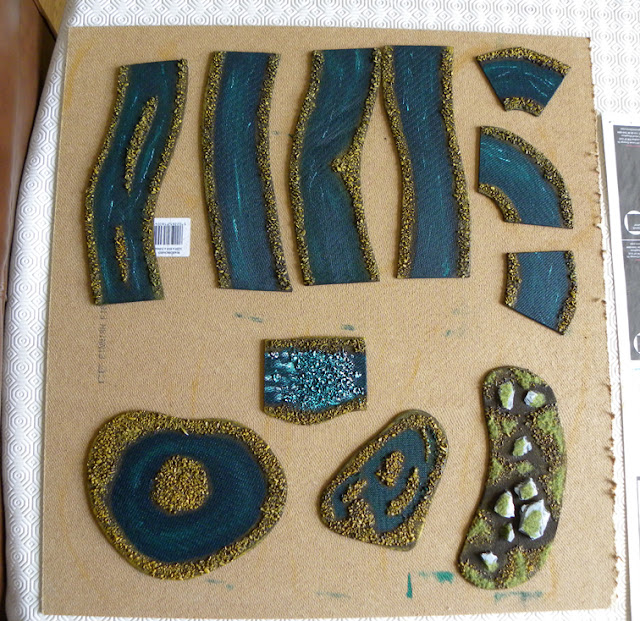 Once all the paint was dry, a liberal coating of pva glue (poor-man's water) was poured and spread over the watery areas. This will be allowed to dry and repeated two-four times depending on how the glue dries to give a feeling of transparent depth to the water. I like to leave the wet terrain pieces somewhere airy to dry out for at least 24 hours between applications of the pva. In a small room the fumes can get pretty strong after a while. When all that is done and the final glue layer is dry, we'll be ready to progress to the next step. 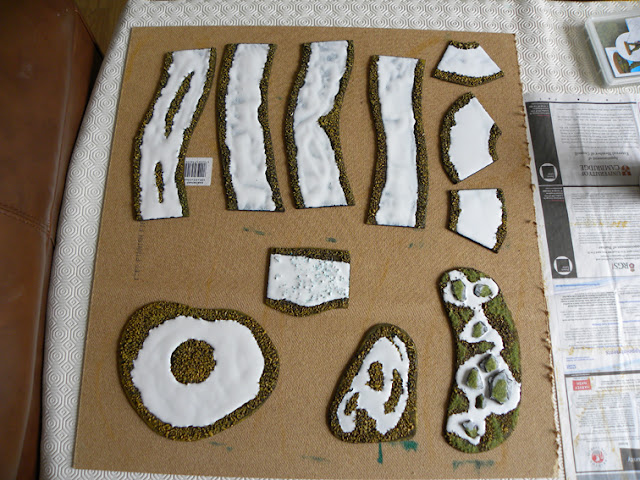 Having left the glue to dry for two days and repeating the exercise, it's not time to add some static grass or flock. I have several different colours of flock coming (all on the boat which I'n now told wont arrive until mid-September!?), so have only used what I have at hand to illustrate this step. Eventually I will add small areas of grass of different colours - but this should serve to illustrate the point. Below is an image of the 'wetlands' unflocked. In step seven below you'll see the rivers with some flock added. 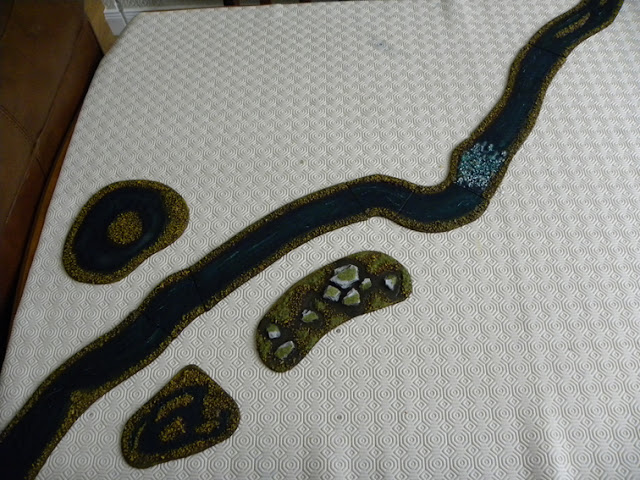 Step Six: The Game board

The game board itself is a pretty crucial part of the battlefield. Originally, I liked the system employed over at Hand Cannon Online, however I soon realised that insulating board wasn't going to survive (quite literally) my son's formative years. I had already purchased a Citadel battle mat and was thinking that perhaps I could do much the same thing as on HCO, but using wood rather than insulating board. This was going to prove quite heavy and a bit of a bother to store as we are currently still in limbo living with family.

Solution - backing the battle mat with a thick but pliable substance to allow it to be rolled up and put away, but gives it more weight than the flimsy mat alone. I ordered some more of the table protector stuff that has been on the table for most of the above photos and cut my pieces to size. As I want to use the table for 28mm scale SBH and SAM (both using 3' square tables) as well as Irregular Wars, DBA and HotT (all using 2' square tables), I cut the underlay to a 3' square and the green battle mat to a 38" square. This was then handed to my ex-seamstress of a mother-in-law who voodoo'd it into something usable! 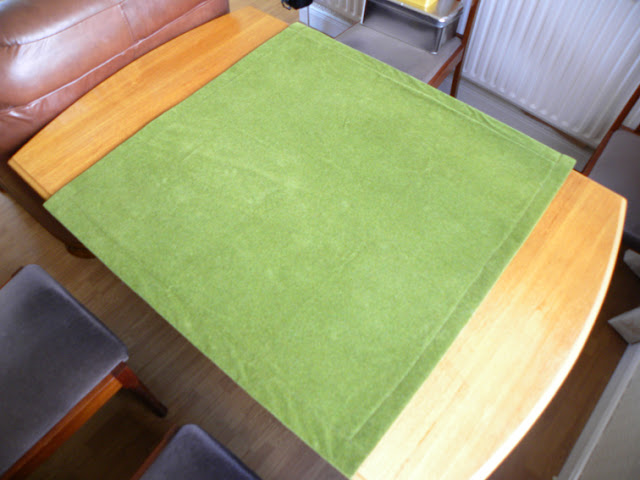 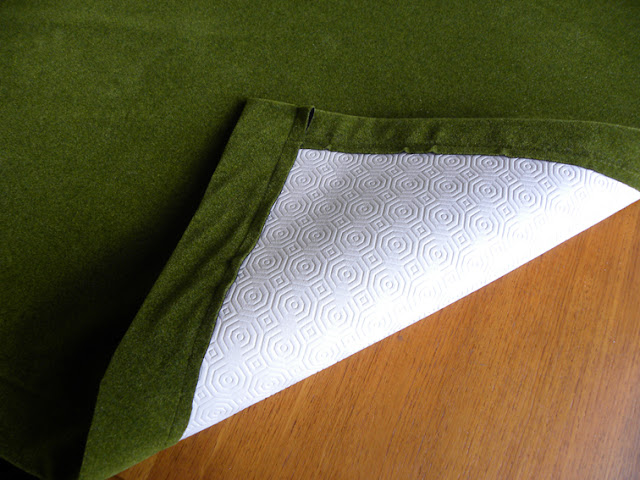 The mat is now heavy enough and non-slip enough to stay in one place on the table, but can easily be rolled up and moved out of the way. Fits my bill perfectly.

And on the Seventh day he wargamed...

Below are a couple of shots of the pieces in play. The battlefield still looks a bit flat because my hills and trees are on the boat, and there is still a bit of flocking to be done with different greens and a brown. However, I hope you'll forgive these slight problems and agree that these terrain pieces will serve admirably on the table and were neither complicated nor expensive to make. 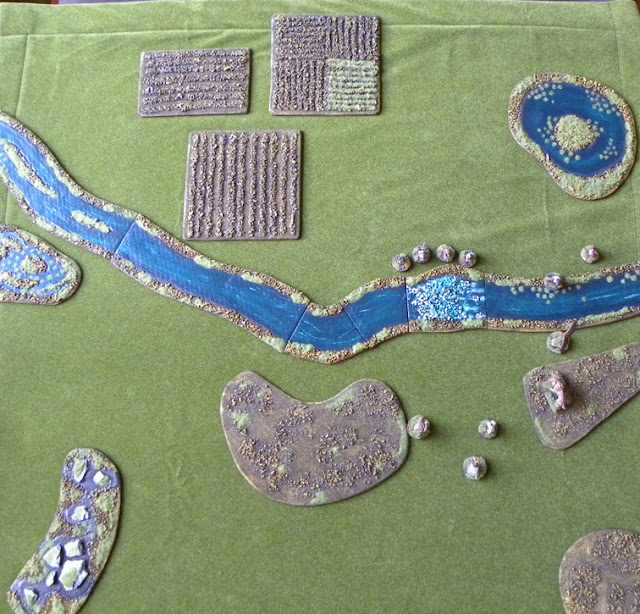 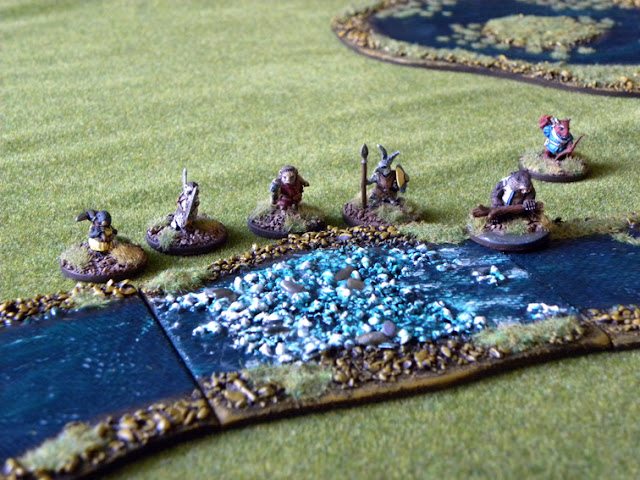 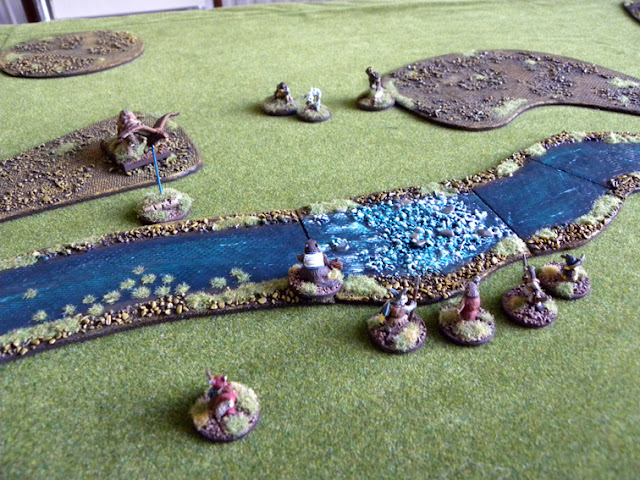