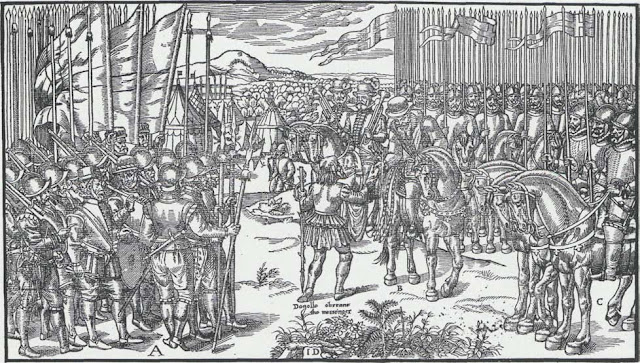 The talks from the second UCD Tudor and Stuart Ireland conference have now been made available as free podcasts from iTunes. The programme from the conference is worth looking, but to give you an idea of the talks on offer, how about:

Simon Egan (UCC): Enemies to the left, enemies to the right: The politics of the wider Gaelic world and the collapse of the MacDonald Lordship of the Isles, c.1460–1500

A number of these will be worth listening to if you fancy wargaming Ireland in the 16th and 17th centuries. Listening to most of them might even make you a better, more well adjusted individual... ahem... but that's not something I can guarantee.

I must say that I haven't yet had a chance to listen to any of this years talks, but I thoroughly enjoyed last year's (including James O’Neill (QUB): Trailing pikes and turning kern: military acculturation in the Nine Years’ War) which are all still available as podcasts. Have a look at the programme here.
1 comment:

After their altercation with the big dumb (and really strong) minotaur the other week, it became apparent to all that Håkon’s Heroes needed someone with a little magical omph. Someone to entangle, distract or otherwise hamper stronger opponents. And for Håkon’s Heroes, of course, everyone is a stronger opponent.

So I went out to garage to sort through my newly arrived box of bits and found Mystico. He was part of the Splintered Light Druid's Faithful box set that I bought a while ago. There were five mice in the set which I kept aside thinking that one day I might make a mouse thieves guild warband. Instead, I've decided to appropriate Mystico and seconder him to my existing warband of sentient furry critters. May he last longer on the table than his comrades have done in the past. 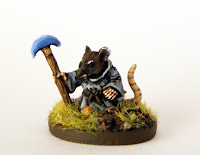 Here are two shots salvaged from Mystico's first outing as a member of Håkon’s (rather doubtful) Heroes. As you can see, the wee mouse magician was pivotal in the engagement. He was able to transfix that mean old minotaur (and his mate) allowing the rest of the heroes to get stuck in. Mind you, it still took two turns of combat for the furry critters to take down the towering edifice of muscle, hooves and horns.

Revenge is a dish best served with steak. 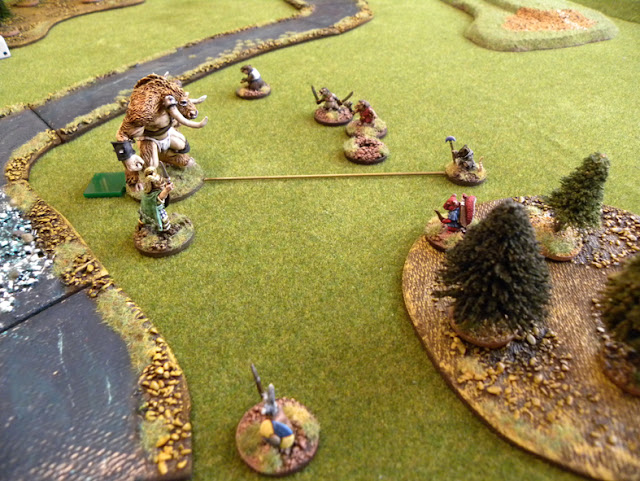 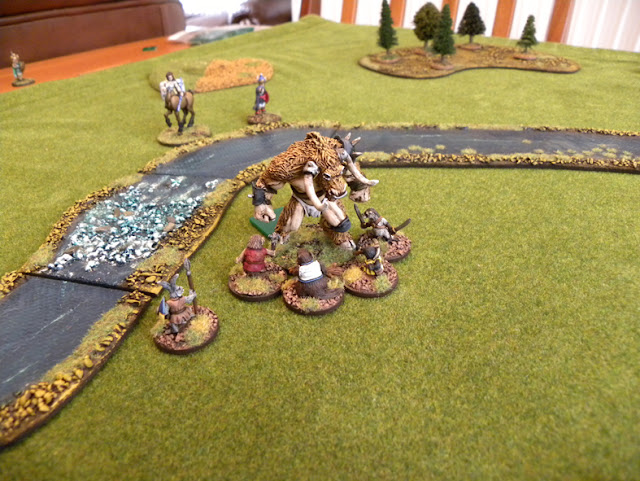 The blooding of the bull (not his own blood obviously)

I was able to get a game of Song of Blades and Heroes in over the weekend. It was good to get back in the saddle after the shock of seeing all my 15mm figures in such disarray. It was also a much needed chance to get the Wardens of Olympos on the field and blooded.

As my beautiful opponent hadn't played in a long time, we settled for a simple 'all out battle' on a fairly open board. She selected the warband of sentient furry critters from  Hedgerow to be the Warden's first opponents. I would have preferred mighty mythically themed Wardens to take on warriors that were more suitably intimidating, but who am I to judge. The respective warband lists (and stats) can be found, as ever, over on the battle honours page of the blog. 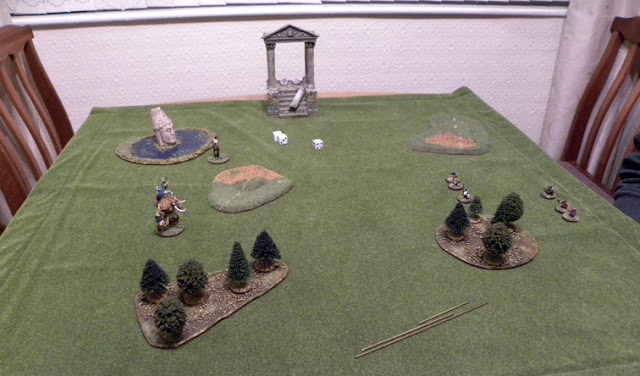 The two warbands approach each other; the Wardens of Olympos on the left, the Heroes of Hedgerow on the right.

The Wardens did their best to get within pain-causing-distance as quickly as possible, Nysa the centaur archer trotted quickly to within shooting range while the others tried to keep together in the centre of the table. Menander the minotaur was slow to activate and caused the main body of the warband to twiddle their thumbs a bit while he caught up. Meanwhile, Håkon and his furry lads played it just as cautiously. Knut the squirrel made a dash for the woods while the rest of the fluffy band tried to make a battle line in the centre. 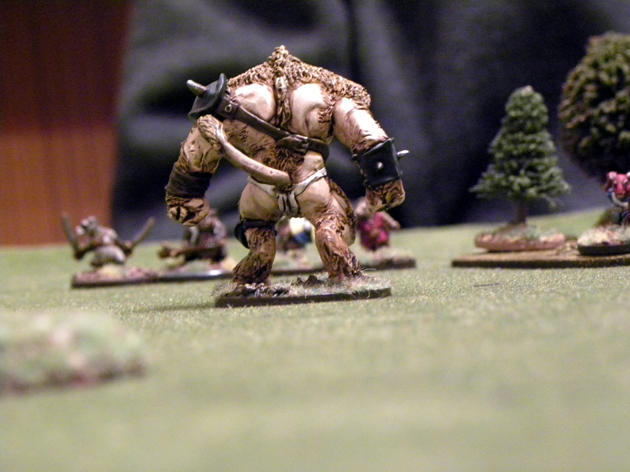 Nysa's first shot obliterated Mortimer the Mole, while Menander got into his grove, just enough to menace the Hedgerow battle line. Then something quite unexpected happened.

From within the ranks of Håkon's band, a lone warrior dashed forward impetuously. Jack Rabbit came right up beneath the very hooves to the towering centaur... 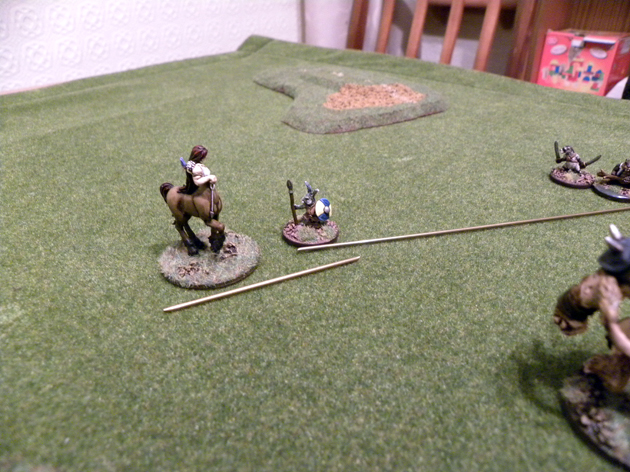 And dispatched her with a well aimed throw of his spear. The fluffy bunny-warrior had taken down the Warden's fire-support but at the same time left himself horribly exposed beyond the aid of his comrades. 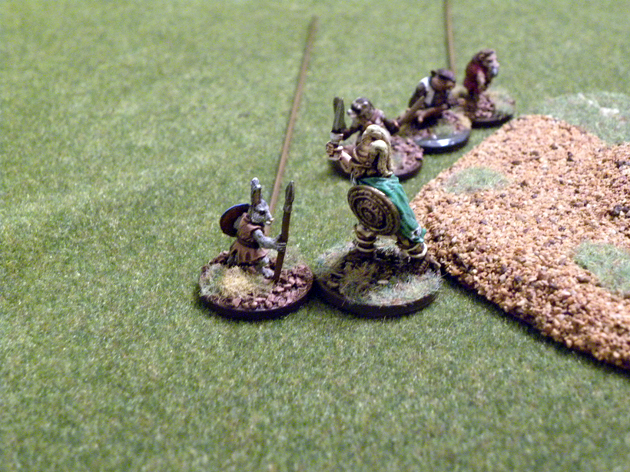 Before his friends could get to his side, Jack Rabbit was engaged by Arrhidaios. A fearless and proud warrior, Arrhidaios was determined to avenge the foul treachery that had led to the death of his equine ally. Only to be knocked down by the hare and promptly dispatched. Things were starting to look pretty grim Olympos-side until the Warden's leader, Ptolemaios, managed to take down first the polecat... 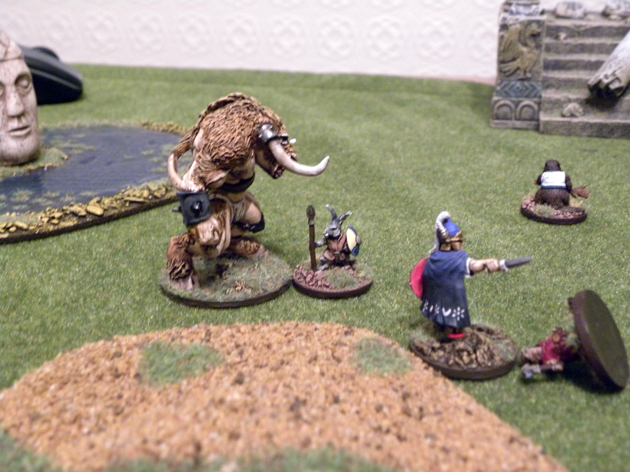 ...And then the heroic Håkon. This caused the beaver to retreat momentarily and gave Menander the opportunity to finally remove Jack Rabbit from play. The little furry terrorist. 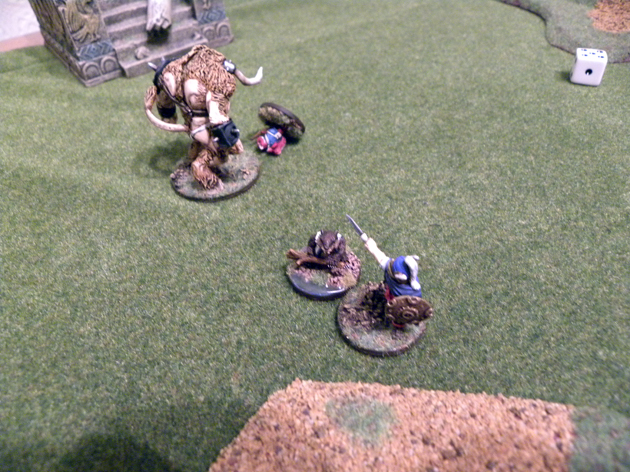 The final turns gave word to the unlikely expression "I'm going to charge your leader with my beaver" and saw poor Knut the squirrel thrown in against the significantly larger minotaur. It was that last action which resulted in Knut being grabbed by the knuts and ripped brutally in half.

It was a great little game, unlikely a match up as it seemed at first, and we really enjoyed ourselves. The Wardens of Olympos were blooded and the Håkon's Heroes of Hedgerow got another outing. I felt a little sorry about Knut who never really stood a chance there, but hey, it was funny as heck.
2 comments: