I have just been alerted to this website which looks to be distributing my copyrighted wargaming rules for free.

It looks for all the world like a phishing scam, and I have demanded they cease advertising that they have my material, and cease distributing it immediately. I have also contacted the UK Citizens Advice Bureau.

That said, some of their reviews/comments are pretty flattering.

Hun Tsu: "My friends are so mad that they do not know how I have all the high quality ebook which they do not!"

Jenny Martins: "Finally I get this ebook, thanks for all these Irregular Wars: Conflict at the World's End I can get now!"
1 comment: 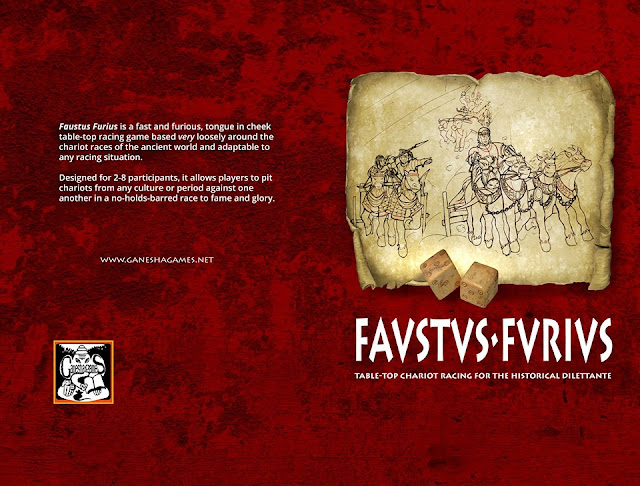 I'm delighted to be able to announce the release of Faustus Furius, my new chariot racing game for Ganesha Games. The rules can now be bought as a pdf direct from Ganesha Games (HERE), and will shortly also be available as a hard copy. There will be an Italian translation available later in the year.
No comments: 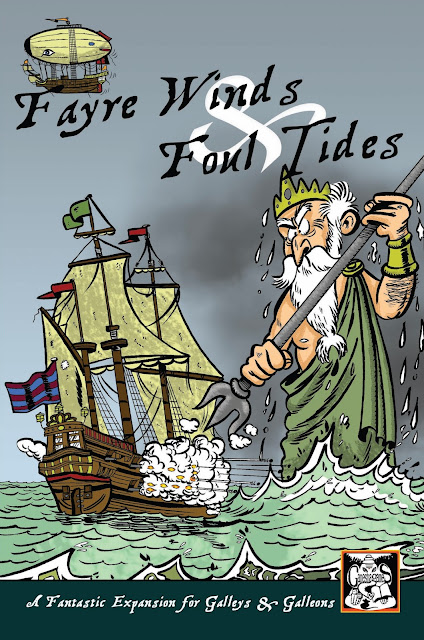 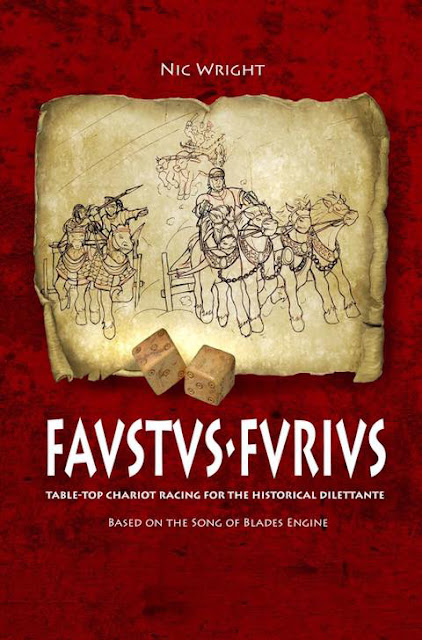 Last week I was able to break out my European Empire Horizon Wars battle group for another run. This time against the insidious separatist movement emerging in Germany. Considering Germany was one of the leaders in the creation of the EE, the vile betrayal of the armed insurrection is met with bewilderment and determined repression in equal measure by Imperial forces. 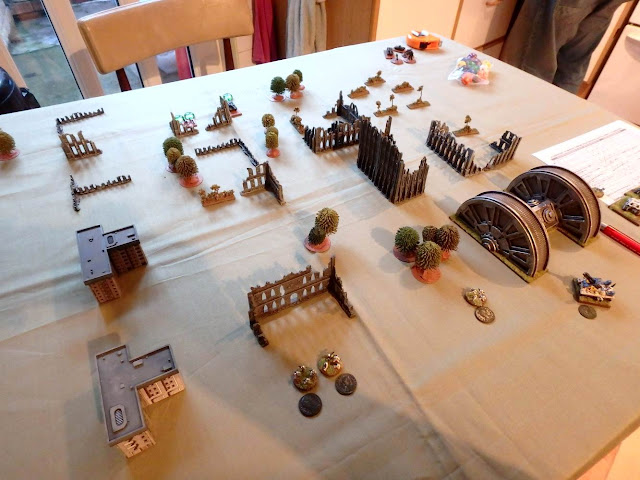 The game was played out in a burnt out quarter on the outskirts of Merkelburg, once a jewel  of the Empire. Here, between abandoned tower blocks, ruins and signs of nature's return, the two forces, each of 15 presence, met to contest Imperial control. 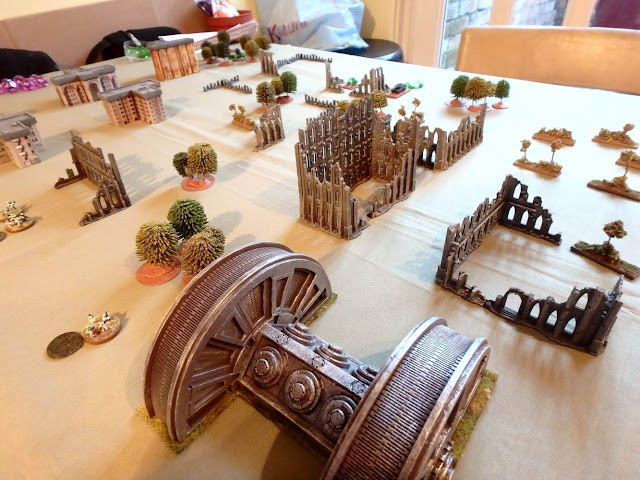 As neither of us had a great deal of experience with the game we just played a 'put stuff on table and fight' scenario. Both of us started by moving our on-table units forward and then commenced with some long range fire-fights. 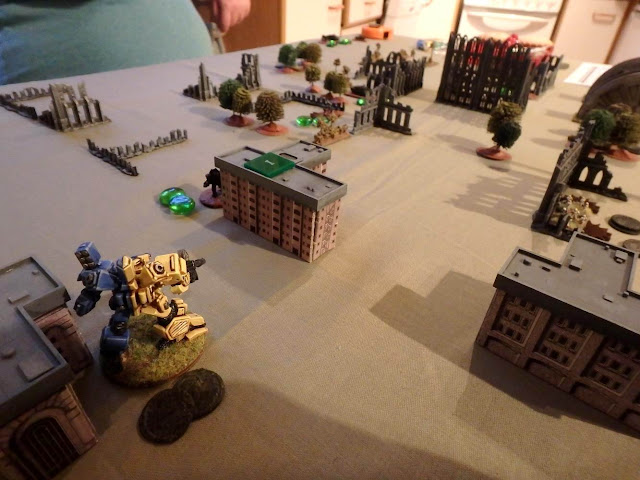 Turn two saw two German P1 mechs enter the table along the German right. These were met by the hulking mass of the EE Batavian class P3 mech, Atlas, with an ace pilot. Atlas meant business and quickly made that clear, sending the opposition scattering for cover. 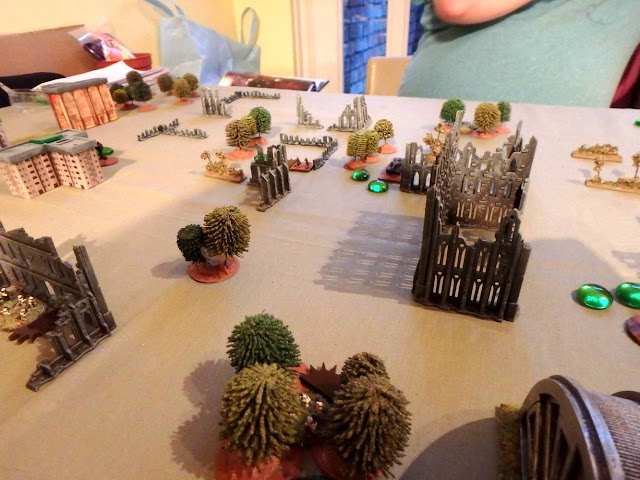 Over in the centre of the battlefield, the heavy infantry on both sides dug in, becoming increasingly difficult targets. The German heavy tank became the preferred target for the Imperials, with first the CHQ, and then the freshly emerged recon section calling down fire from the armoured artillery. 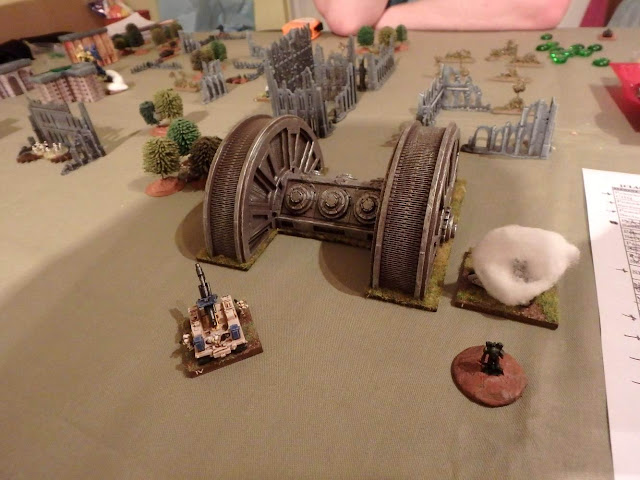 By the end of turn three, the Imperial dragoons (mobile infantry) had arrived, but so had the enemy P2 stealth mech. It swiftly ran down the Empire's right flank. The dragoon I section briefly halted its advance, but their position was soon overrun as it commenced an assault. 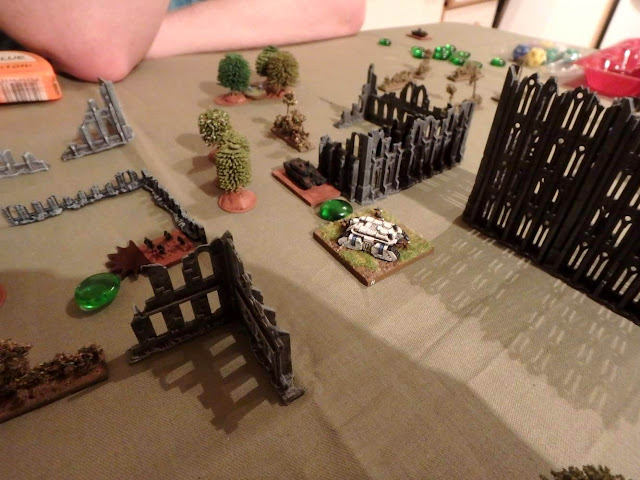 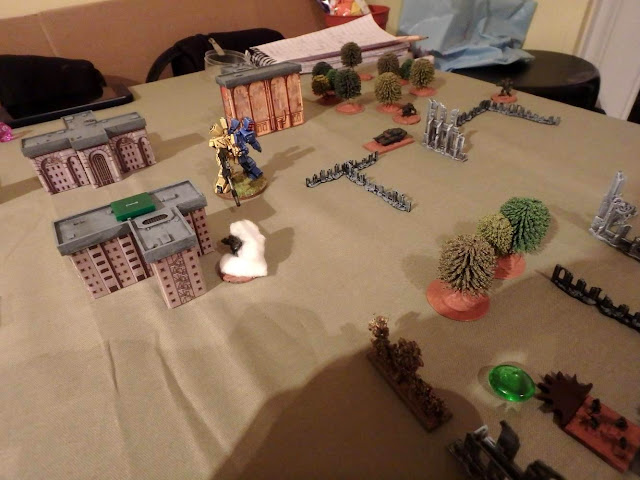 Over on the EE's left flank, the Atlas destroyed the nearest enemy mech, but his action caused a ripple of reaction fire from the surrounding separatist units. Ever his bulk was not proof against their munitions. 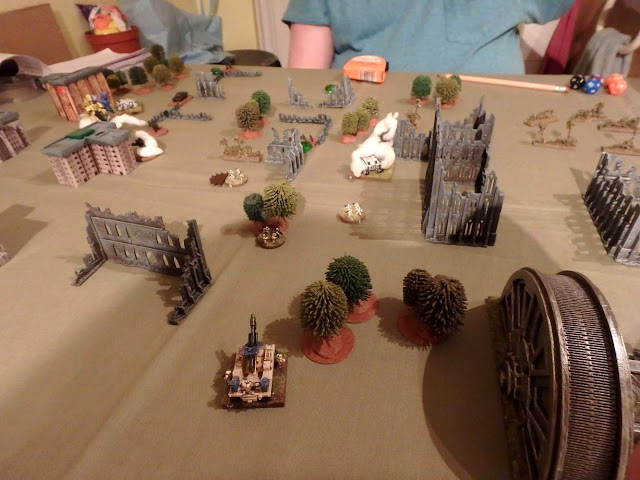 Back in the centre, one Imperial heavy infantry section ducked back to destroy the stealth mech, and then, together with the rest of the initial starting force, started to assault the German positions. Even the artillery unit began to advance to fire directly on the enemy. 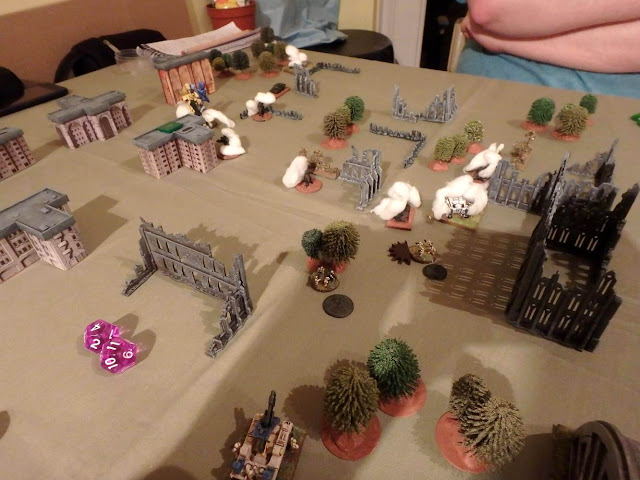 At the close of the battle, the European Empire had reasserted their claim to this quarter of Merkelburg. All German separatist units were destroyed. While the Imperial battle group too massive casualties, two sections of heavy infantry and the artillery came through the engagement in a fit enough state to secure the the area.

The game was a good laugh and, without having much of a notion of Horizon Wars tactics, we both blundered around on the table a little bit. To be honest, I think my imperial force was better structured, and that was what won me the game. The CHQ functioned very well using both the chain of command and guide fire rules to great effect. The separatist CHQ was in the P2 stealth mech. He went off by himself and had little impact on the performance of his battle group. A hard lesson learned.
No comments: