Sir George Clifford (1558-1605), 3rd Earl of Cumberland, 14th Baron Clifford of Westmoreland, Sherrif of Westmoreland, 13th Lord of the Honour of Skipton in Craven, Yorkshire, Baron Vesey, Lord Vipont, was born a few months before the accession of Elizabeth I. As a famous jousting champion and privateer, he was to become one of the most influential figures within the Elizabethan court. Below are some of the key dates in his career.

1570 - Succeeds to his father's lands and titles in at the age of 12. These included the ancestral lordship of Skipton Castle in north Yorkshire where his life is much celebrated.
1577 - Marries Lady Margaret Russel, daughter of the influential 2nd Earl of Bedford. Margaret Clifford was to become a Maid of Honour to Elizabeth I and a powerful figure in her own right.
1586 - Peer at the trial of Mary, Queen of Scots.
1588 - Captains the Elizabeth Bonaventure during the Armada campaign.
1590 - Appointed Queen's Champion
1592 - Made a Knight of the Garter.
1598 - Captains the Scourge of Malice; leads the English expedition to the Caribbean which captured San Juan, Puerto Rico.
1603 - Escorts James VI of Scotland to his accession in London.
1605 - Dies in Middlesex leaving a massive fortune of £15,000 pounds to his only surviving child, the 15 year old Anne.


In 1585 Clifford commissioned arguably the single most impressive English suite of armour ever produced.  Made by Jacob Halder in the Royal Armoury at Greenwich, it consisted of 48 individual pieces, the richly decorated set provides a complete garniture with exchangeable elements pieces to allow for flexibility in its use. 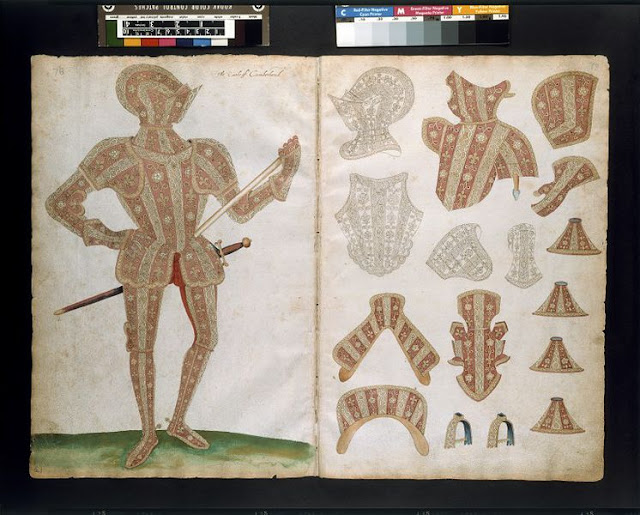 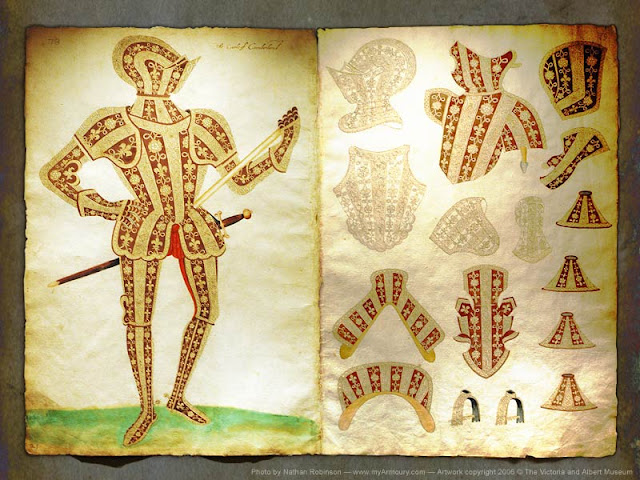 The Almain Album at the Victoria and Albert Museum includes a contemporary sketch of the armour showing many of the fine details visible on the metal itself. The text below is from the V&A website linked above:
This design is one of the more spectacular in the album. The main figure is dressed in heavy cavalry armour for use in battle. On the facing page are extra pieces for converting the armour into light cavalry or tournament use. The supplementary pieces include a grandguard to protect the left shoulder and neck during a joust, vamplates to attach to a lance to protect the hand, and horse armour including saddle steels, shaffron (face-guard) and stirrups. A locking gauntlet, to give an unbreakable grip on a sword during a tourney (mock battle) is also shown with a close helmet, a pauldron and a reinforcing breastplate, but these are shown only in oputline. The design is painted reddish brown to denote that the armour should be heat-treated to turn a deep blue. It is decorated with vertical bands of gilded etching and panes of Tudor roses and knots ornament rising up the armour.
Clifford's Greenwich garniture has been owned and displayed by the New York Metropolitan Museum of Art since 1932. There is a brief video showing many if the fine details available through the BBC online here. 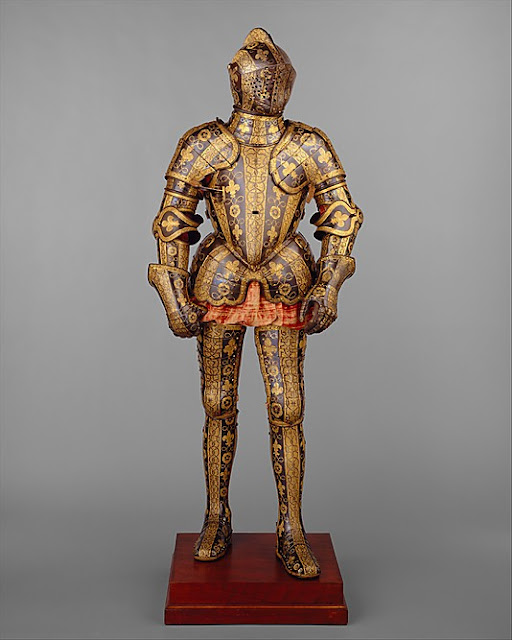 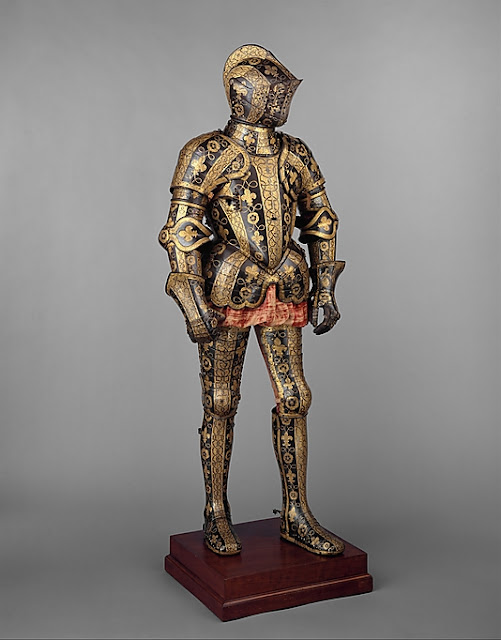 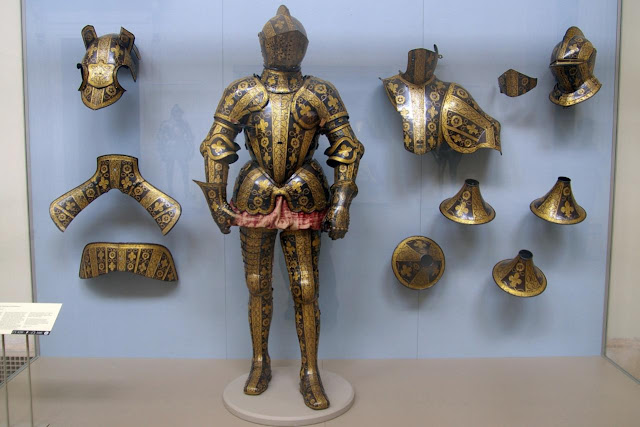 Note that I do not own the copyright to any of the images included in this blog post. Please use the links provided throughout to visit the original websites from whom the images were obtained.
3 comments:

One of the challenges of combining wargaming and parenting ... 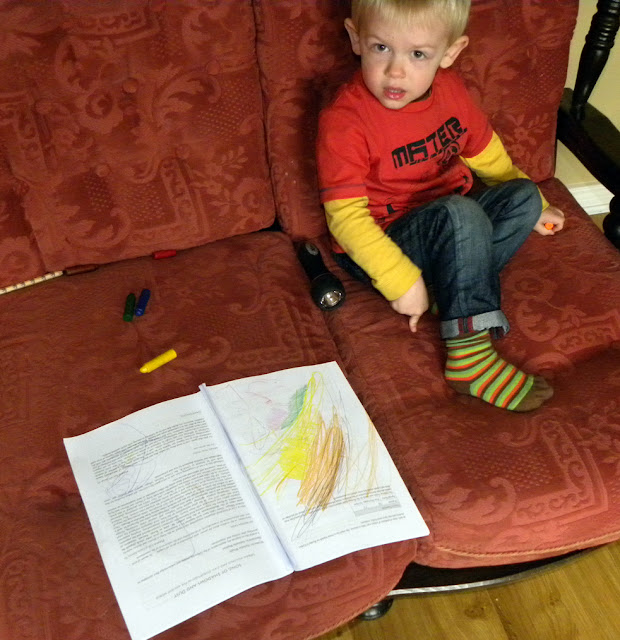 ... when the latest version of your newly written rules set is ambushed by a rainbow.
5 comments:

All round helpful gamer Le Coq Fou (AKA Prince Albert's Revenge on TMP) was kind enough to snap a shot of a few unpainted 15mm Irish figures showing the relative sizes of Corvs Belli and QRF figures. 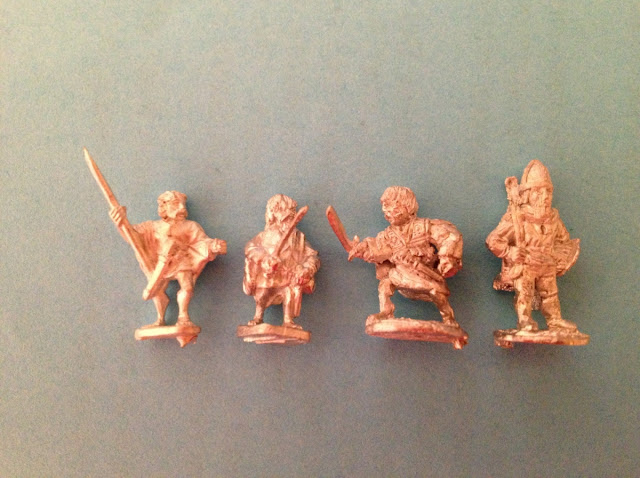 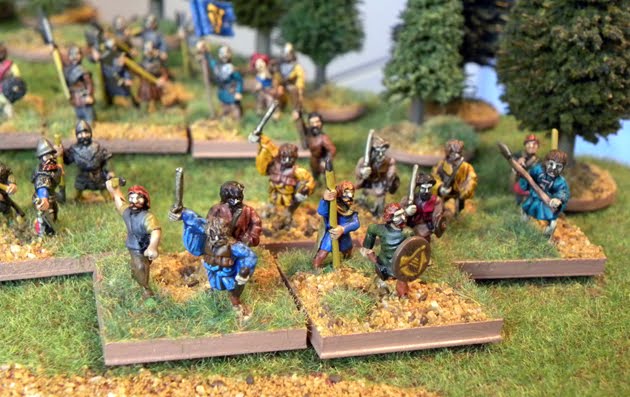 Note that Irish costume, especially out side of the Pale, seems to have changed little between the Norman conquest and the 17th century. If you are looking to field an Irish battle for the 16th century, there is no need to limit yourself to Tudor period ranges for your kern! As an aside, if I did this army again (which I plan on getting around to in the future, I'd choose a more muted colour pallet...
1 comment:

Updates and progress of sorts

I have been fairly quiet of late due to some pretty tragic events in the family. However, behind the scenes the hobby marches on as a nice diversion from a pretty sad reality. One upshot to having a bit of time off is being able to spend lots of time with my (mostly) awesome son/monkey and my lovely wife.

In other news, I recently found an exciting young Hungarian artist to work on some illustrations for the rules set I'm working on for Ganesha Games. For now, lets call them SSD... Due to recent events, I've not been able to playtest them as much as I would have liked but I will shortly be looking for a wider sphere of testers to try out the new rules mechanics.

My buildings for my 15mm scale suburb of Antioch are almost completed and a few more civilians have been painted up (including my first ever camel). No pictures as yet. 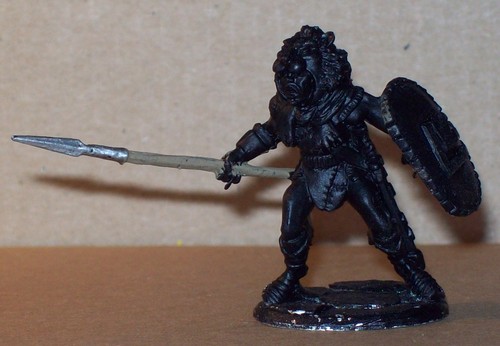 I have also been procrastinating a little on ebay recently and came across this smashing 28mm heroic scale miniatures from Lance and Laser. The figure was produced in the 1990s for the Glorantha game Hero Quest (not the Citadel game) and has been long OOP. Getting it for under £2 on ebay was a real steal in my opinion.

I first saw the figure many eons ago over at the Four Color Figures blog. Below are the (pirated) images which first drew me to the model. If I can achieve anything anywhere near as good a paint job I'll be most pleased. Not sure exactly how I'm going to use the figure but it will fit in well with my existing Greek myth themed SBH warbands and will also work if/when I venture a look at Of Gods and Mortals. 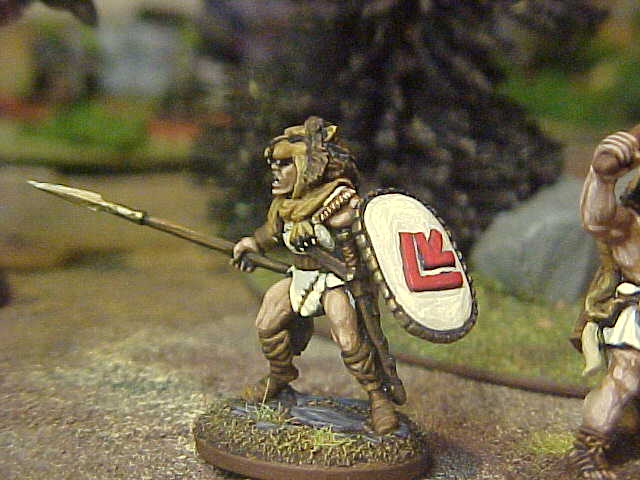 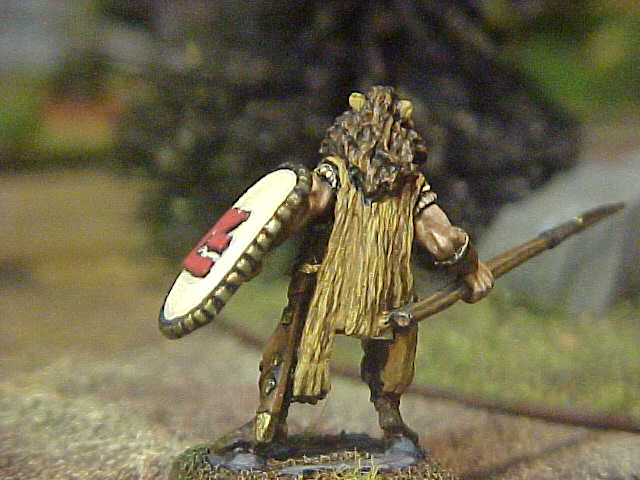