As most DBA players would be aware, evolving lists have been posted and made available through Fanaticus (HERE somewhere) for some time now. Back in July, I caught on to this and had a look at the Seleukid list (II/19) to see what changes had occurred and was relatively pleased with some things, rather concerned by others. I shot off the following email to Sue Laflin-Barker at WRG:
Dear Sue,
Apologies for not being in touch sooner. I have been snowed under with work (and fatherhood) over the last six months and have only just seen the suggested DBA 3.0 army lists. I have a couple of comments or suggestions for the Seleukid lists (II/19) that I feel qualified to make.
i) While I'm glad to see the Seleukid list finally being continued dow to the date of Pompey's dissolution of the Sleukid kingdom, the event happened in 64 BC, not 69 BC.
ii) Sekunda's volume on the Seleukid army is very flawed and not regarded very highly among academics. I was very surprised not to see Bar-Kochva's The Seleucid army: organization and tactics in the great campaigns <http://www.amazon.com/Seleucid-Army-Organization-Campaigns-Cambridge/dp/0521206677> which is a much better researched monograph and also looks into order of battles etc.
iii) Army list d should either be dater 166-64 BC or 166-96 BC allowing for an e list (96-64 BC). A realistic e list would look something like 1xKn (Gen), 1xLH, 1xBd, 2xPk, 2x (Pk or Ax), 2xAx, 1x (Cm or Ps), 2xPs reflecting the shrinking kingdom, less access to eastern cavalry, more reliance on civic militia or Levanine levies (Ax and Cm), certainly no El.
iv) Army list d enemies should include II/22d Characene (fought against by Demetrios II and Antiochos VII, II/28a Tigranes (since Hoover's article in Historia, 2007, it has been clear that Tigranes invasion of Syria should be dated c.75 BC and had an agressive, militaristic side - he was not invited in due to lack of Seleukid kings).  II/33 Polybian Romans are a slightly ahistorical opponent. There was no armed conflict between Rome and the Seleukids after 187 BC.
v) Army list d allies, I am positive that II/47 Early Germans are a mistake...
Please, take these points as you will. I would hope to see points i and v taken into account at the very least.
Best,
Nic
Her response was a little underwhelming:
Thank you for the comments. I'll certainly add the Bar-Kochva reference.
Sue
I have just had another look at the most recent lists and have seen that alot more was taken on board than I had originally feared.
All points i, ii, and the first option of iii, iv and v were all accepted. All there in the new list. I now query why II2 and II3 (Indian armies) are listed as opponents for such a late Seleukid army (166-64 BC)...
I know that WRG have taken a lot of recent flak for not engaging with the wider DBA community or listening to the opinions of those outside of their immediate testing circle. In this case though, I was really pleased to see some changes accepted.
On the whole, bravo to Sue!
No comments: 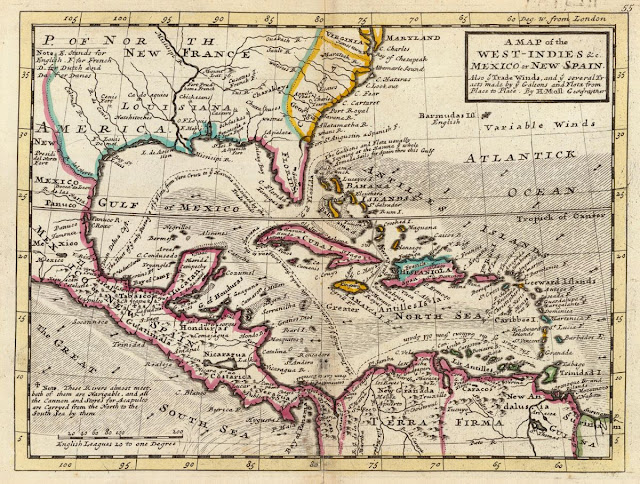 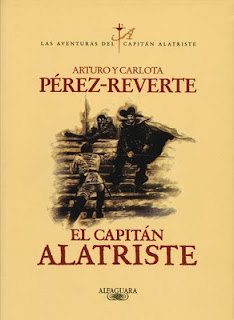 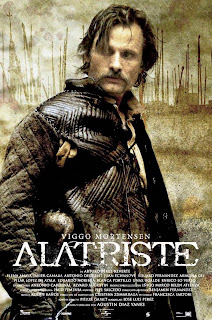 An after action report of Irregular Wars: Conflict at the World's End:
It was all looking so well for the Hollander lord, Colonel Clijsters. En-route to the East Indies, he brought his small flotilla across to the Caribbean to stock up on fresh perishables, tobacco and the odd golden trinket which may or may not have held significance to the hapless indigenes.
Landing a small expeditionary force of a group of merchant adventurers,  two companies of trained shot, a company of mercenary halberdiers, two batteries of ship's guns and a personal retinue of ruijters, Clijsters established a beachhead on a small hillock within cannon shot of the shore. Before he had a chance to send out scouts to make contact with the poxy natives, he started to feel like he was being watched...
As the engagement opened, only three companies of Caribbean natives were visible to the Hollanders through the palm forests. It seemed that Big Chief Jojo had also rolled fairly poorly during recruitment. Only a company each of Cacique head-hunters, scouts and cimeroons were on the board.
The opening barrage from the ship's guns forced the Caribbean lord to come on the offensive. As his hidden companies moved forward, his disposition was revealed. There seemed to be more of the pox-ridden natives than Clijsters had first thought.
The full Caribbean battle is revealed: two companies each of cacique head-hunters, scouts, and cimeroons, four companies of archers, a company of boucaniers and some priests. 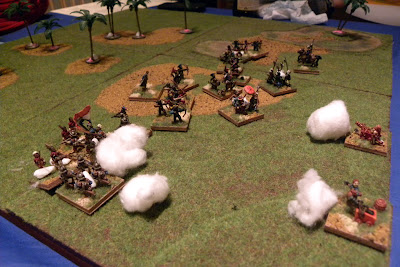 As the natives advanced up the centre, hails of arrows weakened the resolve of the merchants who tried to withdraw out of head-hunter charge range. The halberdiers were not in much better shape while the trained shot continued to hold their own against the cimeroons on the Hollander left. 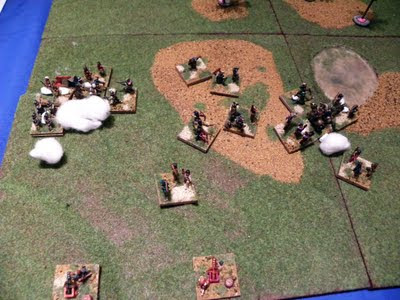 The trained shot finally scatter as the native centre punches through the Hollander's very thin orange line. Isolated on the right, Clijsters and his ruijters charge forward into the massed ranks of waiting heathen who quickly surround him, cutting off all hope of escape.
The Caribbean Indian right flank companies wander around outside of their lord's command radius while their centre make short work of the Hollander cannons. The Hollander ruijters put on a heroic show but after several nail-biting rounds of melee, they slowly sink into the surrounding hoards of natives.
It was a fun game - even if the Hollanders were the obvious underdog from the beginning. If the trained shot had managd to scatter the cimeroons (and there turned out to be only one roll that decided that struggle), The results could have been very different. On the other hand, if the ruijters had been committed earlier they might have prevented the Hollander right being shot up so badly before the crucial melee encounters.... Whichever way you look at it though, the Hollanders had a sorry, sorry day.
1 comment:

Here are a few shots of the main infantry forces for the Royal English - the English mounted and longbowmen were previously previewed HERE.
All figures are Essex, a mixed selection from their 15mm 16th century and ECW ranges. I added the ECW figures to a) provide a bit more variety as far as poses are concerned and b) to try to give them a very late 16th centruy (O'Neill's rebellion-ish period) look. The colour concept was to have the demi-lancers, border horse, billmen, longbowmen and artillery in a red and green (Tudor) livery, while the pike militia and plantation militia are in greys, browns and blue. I think they came up alright.
Finally, here are a few 15mm Irregular sheep and lambs. Irregular's range of animals is quite extensive. I used their goats for my DBA Paionian camp and I liked the figures very much. Unfortunately their sheep are a bit disappointing (read 'pants')... These will be used for livestock raiding scenarios in Irregular Wars: Conflict at the World's End.
2 comments:

In order to use my Paionian figures <here> in battle against my beloved late Seleukids, I picked up and painted three extra elements that will allow me to convert the bulk of the army into a mercenary army in the service of Pergamon - DBA v.2.2 list II/34.
The Pergamene army list allows 1x3Kn (Gen), 1x2LH, 1x3CV, 6x4Ax or 6x2Ps, 2x2Ps, 1x4Wb or 4 Ax.
By keeping 1x2LH and 8x2Ps of my Paionians, I only had to paint up 1 elemnt each of Kn, Cv and Wb. 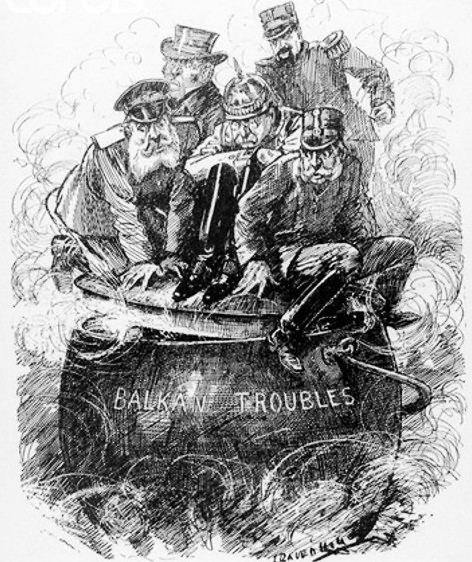