HC reinforcements and a new side project

My recent relative laxity in posting is pretty informative. I started a new job at the beginning of April and it seems to be using up a lot of by wargamey stuff time. How very tedious. None-the-less, it is a pretty good position and I probably shouldn't pack it in just to be able to spend more time here. Probably.

So, after that preamble/ramble, I've only time for a very brief update. I have managed recently to put togeter some reinforcements for my Hail Caesar Seleukids and have even started a small side project. For 'started' read 'rebased some stuff already painted'.

I added another base of Arab light infantry to 'upgrade' the unit to a standard sizes light infantry warband. I also made up a new commander with an Arab aide or sheik. 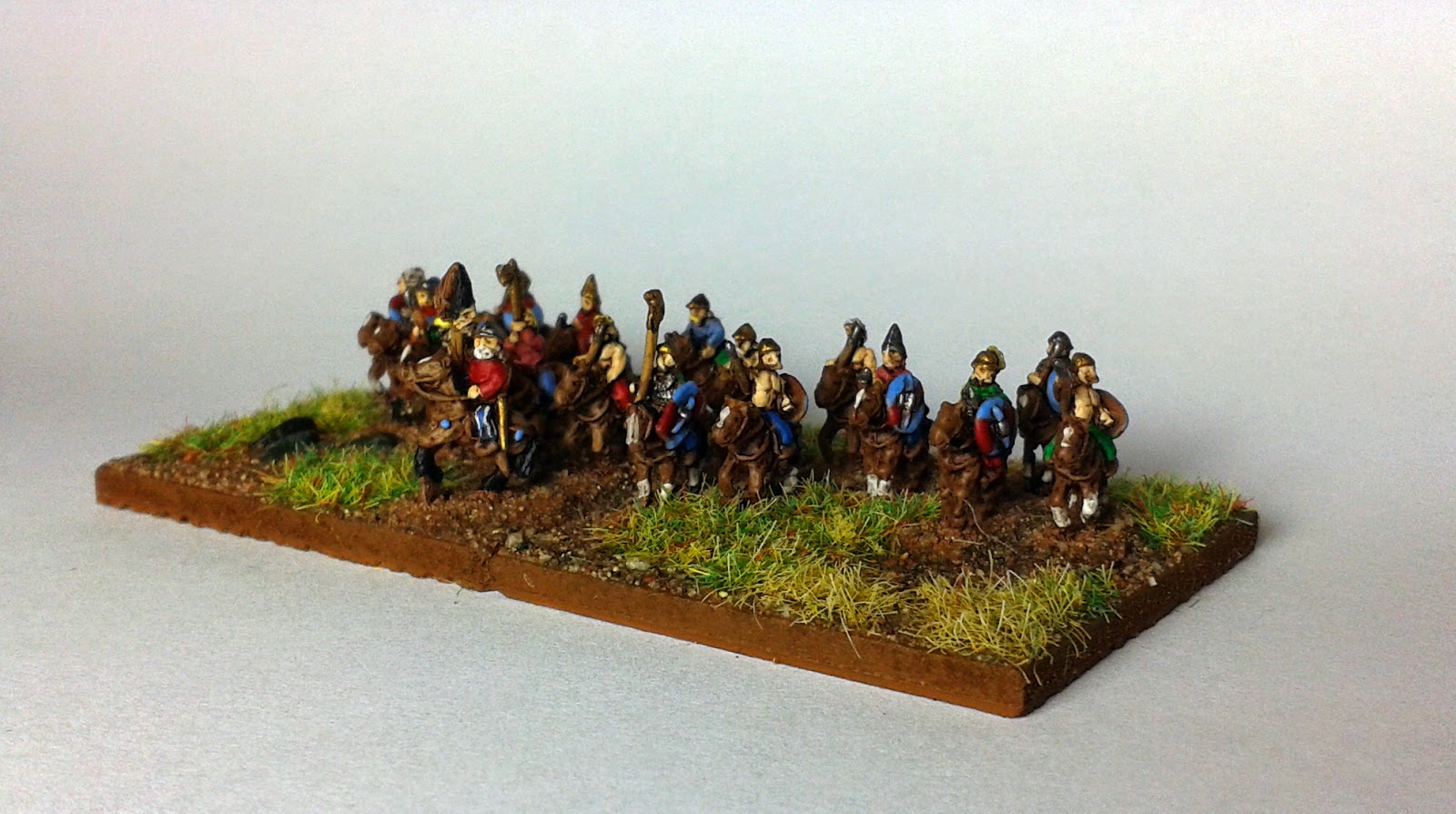 
And without further adieu, here are some re-based Romano-British. The figures are 10mm Pendraken late Romans. They were previously based individually for Song of Arthur and Merlin but the sad fact is that 10mm skirmish games don't draw in too many punters. As I love the figures, I've decided to reebase them for Dux Bellorum, written by Dan Mersey (the same author as SAM) and have already recieved confimation that others in my local wargaming club will join me in the enterprise. With my existing stuff, I only nned to but two or three packs to have two complete armies - Romano-British and Irish. Here are my Romano-British mounted companions and a shield wall - based on 60x30mm bases.

The Cú Chulainn Cup - the results are in!

On Sunday last, a dedicated band of high spirited gamers sat down for the the inaugural Northern Irish Song of Blades and Heroes competition, the Cú Chulainn Cup. There were seven of us in all, bucking the trend perpetuated by the 'bigger' name wargaming systems who dominate the hobby. Six competitors and myself as an impartial umpire. We had prizes provided by both Ganesha Games directly and from Wee Gamers, the host club for the event. These were for the overall winner and for the winners of two popular votes - the favourite warband and the most sporting player.

Each player brought along one fixed 300 point warband and played against each of the other competitors  in a five round competition day. There were six different tables set up with predetermined scenery and scenarios which would put the various warbands through their paces. Ideally, I hoped that no player would have to play on the same table twice although as it turned out, one of them did have to play one of the tables twice. Not such a bad result.

The six competing warbands were:

Providing the backdrop for this clash of heroes were the following tables:

TABLE 1 - The Titanbane Quest
Three counters are placed on the table marking possible locations of a magical weapon known as Titanbane. When a model comes into contact with a counter they may spend 1 action to search the area. Flip the counter over and compare the number with the possible ‘finds’ below.

I. The model has found Titanbane, a magical weapon of great craftsmanship. A model must spend 2 actions to pick up Titanbane. Any model holding Titanbane may give it to an adjacent model by spending 1 action. If a model carrying Titanbane is killed, another figure may pick it up from the dead model’s body by spending 2 actions.

II. Face your Fear! A manifestation of Fear (Q3, C3, artificial, drain, dogged) appears in the location of the marker, i.e. engaged in combat with the model. It will be activated by the opposing player at the start of their next and subsequent turns – always roll three activation dice; it won’t cause a turnover even if you fail them all. Fear may only attack or be attacked by the model who discovered it. If the model who discovered Fear is killed, Fear will disappear. Fear and any death it causes are ignored for the purposes of calculating victory points.

III. Nothing but footprints in the dust, fingerprints in time… Lost in thought, the model may make no further actions this turn.

Victory conditions: 1 victory point per 25 points of defeated opponents (killed or routed off the table), plus 5 victory points for holding Titanbane at the end of the game.

TABLE 2 - A Place of Power
The rival warbands have found a stone circle ripe with mystical energies and will now fight to possess it.

Magic-using models (including all magic users, magic using subtypes and clerics) standing within the perimeter of stones gain +1 on all their Quality rolls, including Morale rolls, and cannot run out of magic power until the end of the game so long as they continue to stand within the stone circle.

Victory conditions: 1 victory point per 25 points of defeated opponents, plus 3 victory points for every magic-using model standing on the Place of Power terrain at the end of the game.


TABLE 3 - Village Skirmish
The rival warbands engage in an all-out battle to the death (or for 45 minutes, whichever happens first).

The rival warbands engage in an all-out battle to the death (or for 45 minutes, whichever happens first). However, they happen to have met while exploring the Doom-Chasm Caverns, a seemingly bottomless cave system where movement is restricted to platforms connected by walkways.

Any model that falls on a walkway must pass a Q check on one die or will fall of the edge into a chasm. Any model forced to recoil over any edge of a platform or walkway will likewise fall into the chasm. All models who fall into the chasm are removed from play and count as defeated opponents for the purpose of victory points.


TABLE 5 - Shadows and Dust
The two warbands meet in the dark alleyways of a great city. Here they will each attempt to assassinate their rival’s leader.

This scenario uses the climbing and leaping rules from Song of Shadows and Dust. Models may climb up the walls of buildings at the cost of 2 actions. They must make a Q test on three dice:
· If they pass all three they may climb their normal movement rate.
· On one or two passes the model starts to climb but the distance reached is reduced by one movement category (that is, Medium becomes Short, and Short becomes one-base-width). If they have not reached the top they will fall.
· Three failures will see the model climb to the top of the wall and then fall back to the ground.

A model on the edge of a raised terrain feature may freely drop their own height for free as part of their normal movement. Any larger drop causes the model to stop at the edge of the terrain piece. They may spend one action to make a controlled drop, easing themselves down to a lower level no more than 1x Short distance below.

A model can attempt to leap between points up to his normal movement distance. The two points must be either level, or with the landing point no more than 1x Short distance lower than the starting point. Leaping between two points takes one action. The model makes a Quality check on three dice.
· If they pass all three they may leap their normal movement rate.
· On two passes the model leaps their normal movement rate but falls over at the far end.
· On one pass the model leaps one movement category shorter than normal (that is, Medium becomes Short, and Short becomes one-base-width).
· Three failures will see the model fall falls midway through the jump.

If a model falls when at the edge of a raised terrain feature or during a climb or leap, he falls for the whole distance. A falling model must make a Quality roll, on one die if the fallen distance is up to 1xShort, two dice if up to 1xMedium, three dice if up to 1xLong. On any failure, the model is out of action. Models falling further than 1xLong distance are automatically removed from play as a casualty.

Complete success on any falling damage roll means that the model has fallen but is otherwise uninjured.

Victory conditions: 1 victory point per 25 points of defeated opponents, plus 5 victory points for killing (or routing) the personality in the opposing warband with the highest points value.


TABLE 6 - Wilderness Skirmish
The rival warbands engage in an all-out battle to the death (or for 45 minutes, whichever happens first).

As Andy B is one of the chaps who runs the Wee Gamers wargaming club, he graciously passed up the prize for coming in top of the leader-board and it fell instead to Andrew T for coming in second. The day was smashing good fun. I really enjoyed it even though I didn't even roll any dice, and I suspect the lads enjoyed themselves too. We will most certainly repeat the exercise in the future.