SSD on track for Christmas release ... 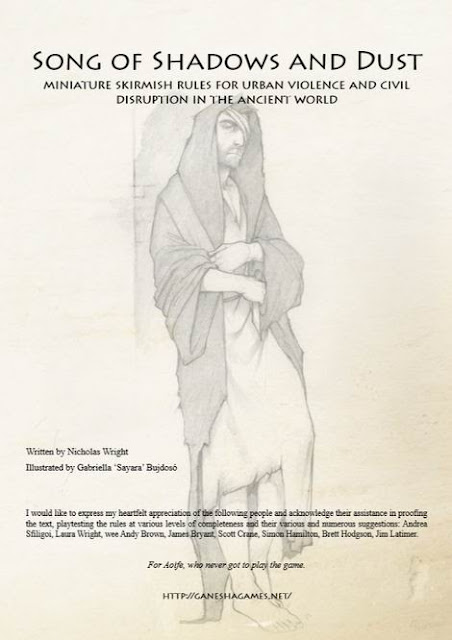 ... at least, that's what we're aiming for and I think we're well on track.

Spare a shekel for an ex-leper?
No comments: 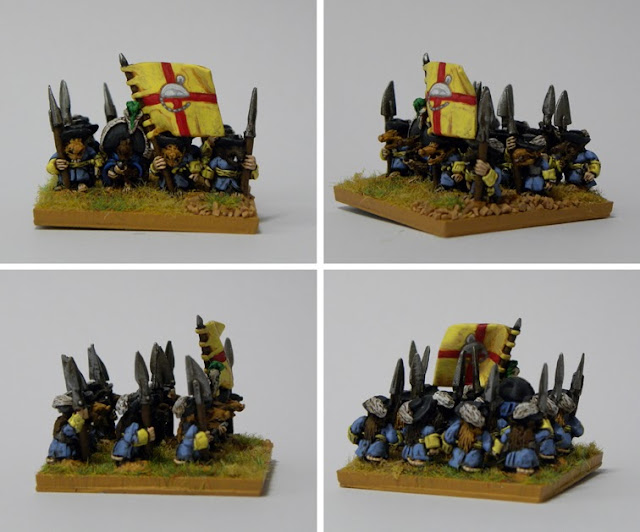 The wealthy burghers of Roquefort are among the most important supporters of the Ayatollah of Gorgonzola. Devoted to the mysterious prophet and his eastern philosophy, the rats of Roquefort provide the elite Revolutionary Guard and act as a rallying point for the more irregular elements of the Gorgonzola insurgency.

This is the first HotT element I have worked on in more than 18 months and the first unit in the army of the Ayatollah of Gorgonzola - the leader of the religious and social rebellion against the Grand Duchy of Cheddar. The figures are 10mm Ratguard from Kallistra miniatures. Clearly derived from the Pendraken League of Ratsburgh range, I believe these exclusive conversions are produced under license by Kallistra. They come cast on strips which I was wary of at first, but I think I might like these slightly more than their Pendraken archetypes - there is just more variation in the individual rats and their colonel is heart-breakingly cute.

As the unit was raised from a county within the Duchy of Cheddar itself, the ensign retains the red cross of Cheddar but on a yellow rather than white field. The central device, a grey mouse or rat, signifies the unit's loyalty to the Ayatollah. The coats are dyed Roquefort blue from a special fungus which grows exclusively in the caves below Roquefort castle.

In HotT terms, I guess they could be used as two bases of Spear, double based, but the intention is to field them as a Behemoth. Envisage an elite guard unit marching in column formation, punching through the enemy's lines. 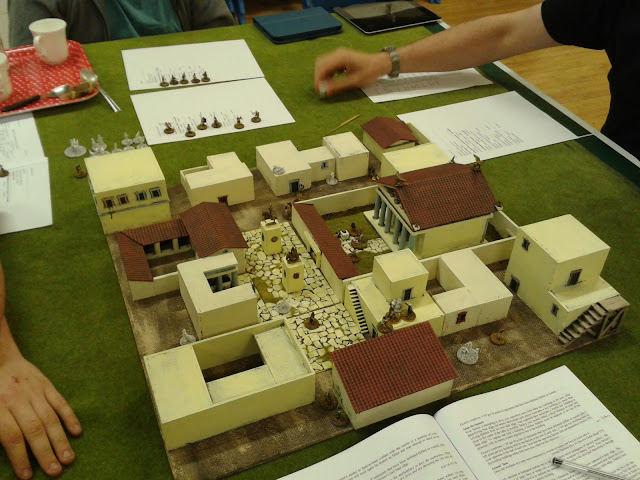 Last night I hauled myself down off the mountain and took Song of Shadows and Dust for a couple more playtests to Wee Gamers (the wargaming club that meets in Whitehead on the Co. Antrim coast). In the picture above you can see my not-quite-but-almost-complete scenery laid out for the second game of the night. From the authors perspective, the night was a huge success with lots of unforeseen 'incidents' nutted out and a couple of rule changes, additions and refinements.

From a gaming perspective it was a night of riotously good fun - certainly for me but I suspect for the others as well... There was lots of scaling buildings and leaping alleyways. The evening saw a faction leader attempt to leap a courtyard, slip and fall with an cringe-worthy snap, leaving his minions without his leadership and desperately handicapped. We had children throwing stones, people knocked backwards off roofs, a sheikh smacked by an oar and a hilarious incident involving an irate mule and a swarm of angry bees!

My heartfelt thanks to Brett, Andy, Simon and James for a great night and for all their insights. I hope to repeat the exercise at Wee Gamers again in the near future.
1 comment: 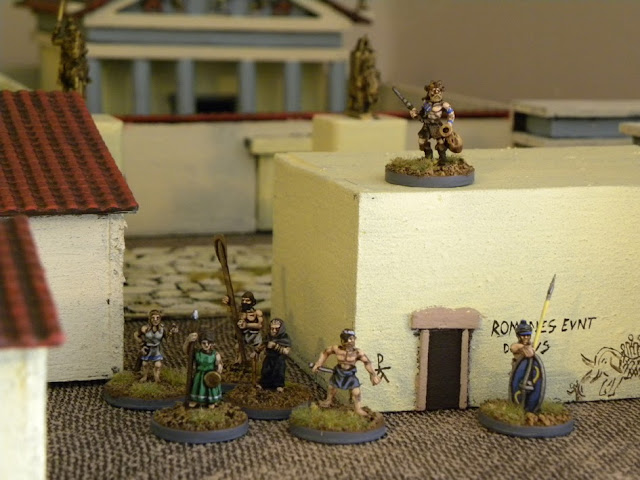 The Kybiosaktoi (packers of salted fish) are one of the factions being used to playtest Song of Shadows of Dust and might be considered typical of the many factions of ruffians leaving their mark on the streets of Antiocheia Mikros (sometimes quite literally). Legally the faction is composed of a trade association or guild who trade in the preserved fish brought up from the coast and exported into the Syrian interior. Unofficially the Kybiosaktoi maintain strong links with various groups of pirates who base themselves or the rocky shores of Kilikia, and, like many of those pirates, would like to see a different, more sympathetic king residing in the royal palace. Luckily for them, in the first century BC, there is no shortage of potential kings.


Strato Monophthalmos (the one-eyed) is the faction's leader. He used to sail with a band of like-minded gentlemen out of Korykos in Kilikia until a Roman arrow took out an eye. Now he trades in salted fish and goods found at sea without owners. He also runs the Green Oar tavern, a den of iniquity in one of the seedier backstreets of Antioch.

Strato's grandmother, Erato, is thought to commune with the spirits of murdered virgins and is one of his chief advisers. She can usually be found in one of the back rooms of the Green Oar where she prepares curses on commission.

Philokrater has perhaps spent too much time in the Green Oar. He hails originally from Northern Thrace and is employed to ensure nothing untoward happens to Strato.

Antiochis, is a fiery young widow who's husband, a member of the Kybiosaktoi, never came home one night and was found a week later being eaten by rats in one of the sewers opening onto the Orontes River. She has sworn not to remarry until she avenges her husband's death.

Apollonios is a former light infantryman. After thirteen years serving in the Seleukid army he was discharged with no backpay for punching an officer. Finding himself without an obol to his name and back in his native Antioch, Apollonios now works for the Kybiosaktoi.

Apollonios' daughter Europa was brought up in a succession of army camps and learned early on that a girl needs to know how to take care of herself. She always shadows her father and has become a well known and respected member of the Kybiosaktoi in her own right.

The last of the known members of the faction, Zeuxis is an old companion of Strato's from his seafaring days. He demonstrates his immense strength by carrying an oar around with him at all times. The oar has also proved handy in more than one altercation on the backstreets of Antioch.
2 comments: 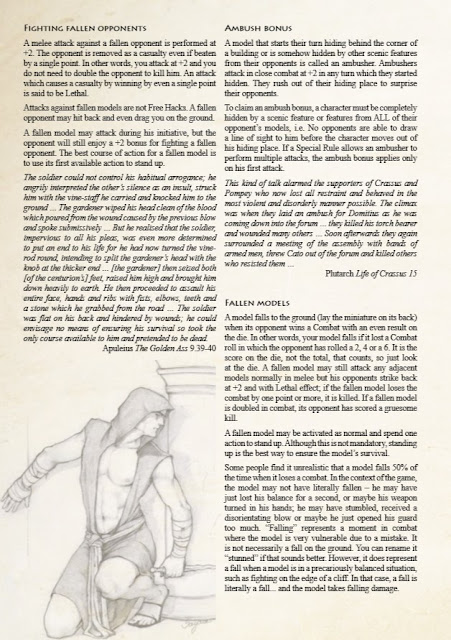 The very talented artist who is doing the illustrations for Song of Shadows and Dust has sent through the first set of images. By way of procrastinating this afternoon - I was supposed to be researching the best time to plant lupins - I mocked up a few pages of the rules to see how they looked with pictures.

Here is just one sample page. It probably wont look like this when finished, but you can see that things are beginning to take form. Note that the text on this sample page was chosen because it doesn't vary much from standard SBH rules ... I need to keep some cards close to my chest after all.

On the beat with the Civic Militia 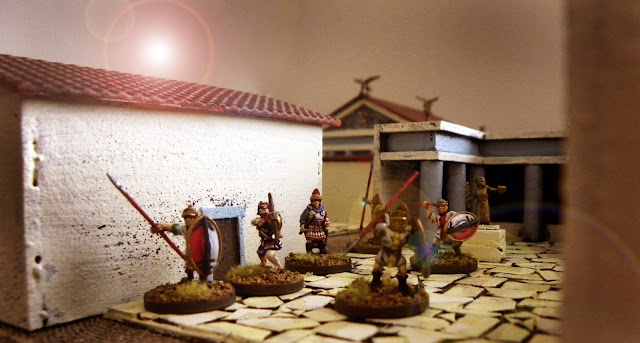