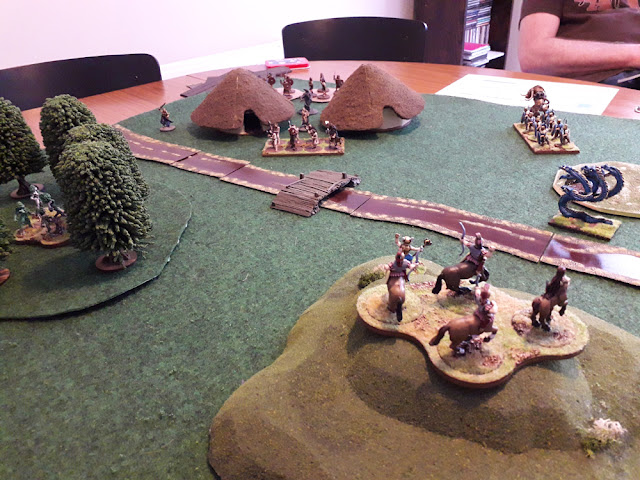 I introduced Lee to Andrea Sfiligoi's Of Gods and Mortals last week with two games pitching a pack of hairies led by Thor, against my less hirsute Greeks. Initially Thor took on Hermes (out for his first game) and later he fought Athena. Once again, my camera(-phone) proved incapable of taking decent photos, although the fact I was shaking with man-flu may not have helped...

So, to string together an ad hoc narrative to support the few grainy images: Thor had the same followers in both games - 8x berserkers, 8x skirmishing youths, and three valkyries. Hermes led a force consisting of 8x Thracians, 4x centaur archers, and 4x dryads, all supported by the minotaur, the hydra and the Kalydonian boar. 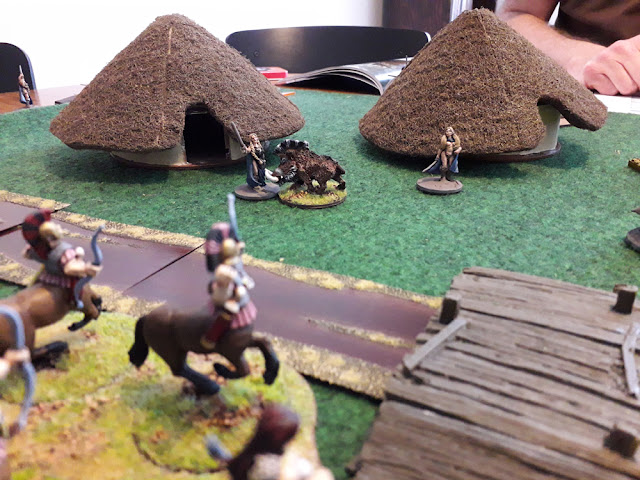 The Norsemen were all penned up behind the village to begin with. The berserkers and my Thracians kept snarling at each other, but neither managed enough activations to get close to each other for quite some time. This left the minotaur exposed in the middle of the two units, where he was set upon and ravaged by a valkyrie.

The centaur archers knocked down another of the valkyries, allowing the Kalydonian boar to leap the river and send her back to Valhalla. unfortunately, Mr Bristlebreeches (as he is affectionately known) was then likewise exposed behind enemy lines. He managed to fight off the third valkyrie, but ...

... then received Thor's hammer, Mjölnir, in the butt and dropped dead. Hermes, meanwhile, had decided to be a bit gamey and zigzagged across the table to attack the Norse skirmishers, forcing them to recoil off the table and destroying the unit. 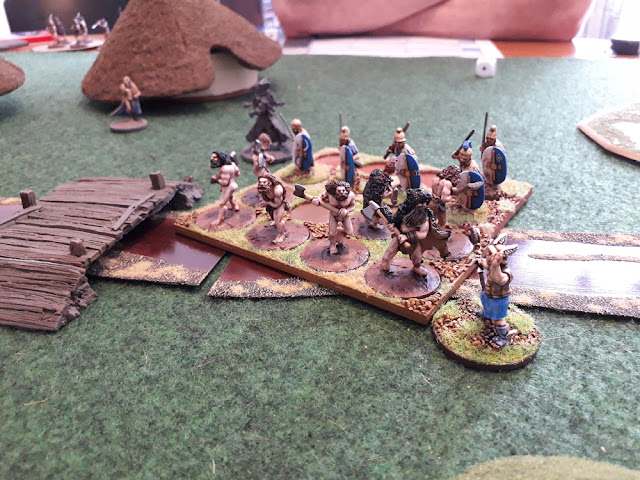 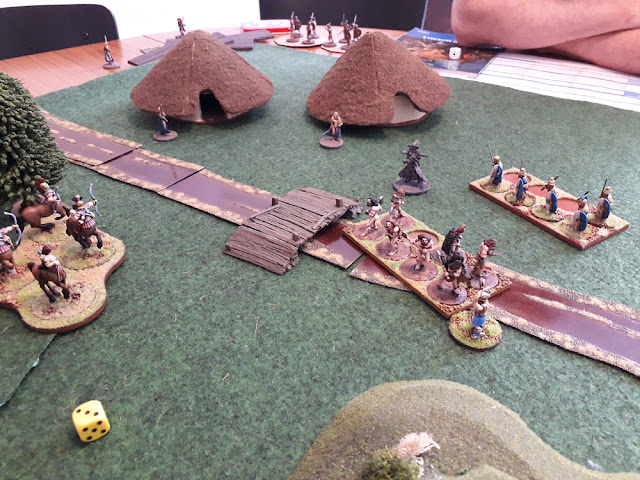 Somehow, the berserkers held themselves together and saw off the opposition though. 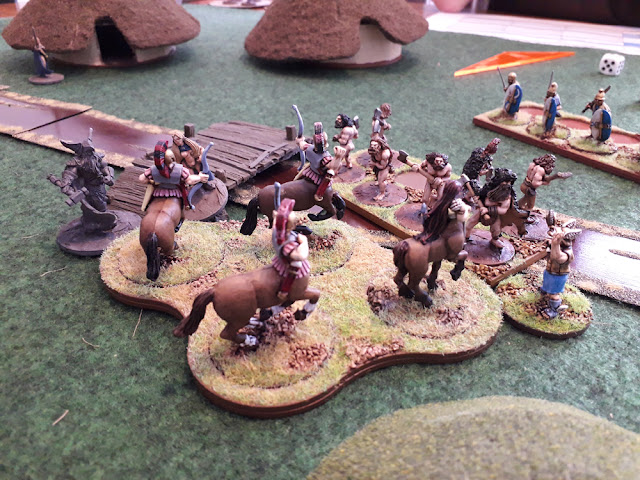 One of the remaining valkyries wandered over too. This forced me to throw in my centaurs, which raised the odds. Then Lee saw my bid and raised me Thor. the ensuing fray didn't go terribly well for me. Hermes was killed, re-invoked, and killed again. Both the centaurs and Thracians were badly damage (three centaurs died in a single hit from Thor!), and reduced to a point where they could no longer invoke. 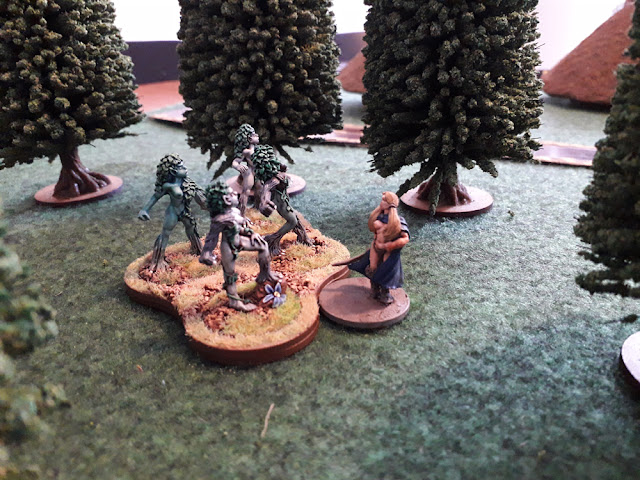 And then, in a battle of the boobies, the less-than-well-occupied other valkyrie crossed into the woods and punched a tree. With my god nursing his wounds, and no units left which could invoke him back, we called the game a pretty brutal victory for Thor and the hairy tribes of the North.

For our second game, we played the 'Sacred Grove' scenario. At the end of six turns, whoever had more assets in the grove would win the game. This time, Athena led 8x Macedonian hypaspists, 6x heroic undead shades, 4x dryads, and was supported by the heroes Herakles and Atalanta. 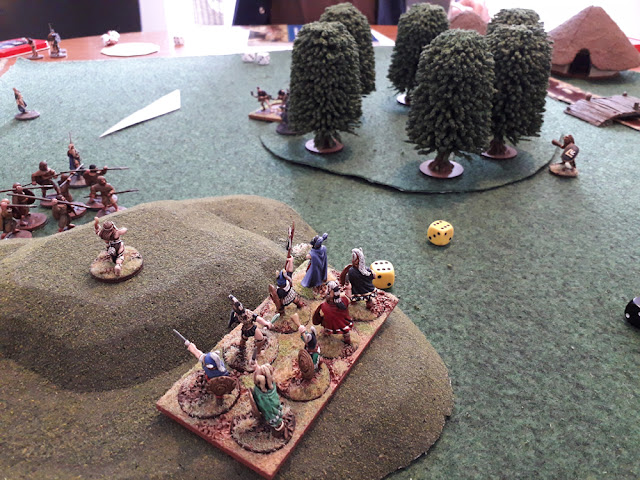 Atalanta and the Macedonians decided to eradicate the Norse skirmishers to begin with and pushed them down from their hill. While this proved a pretty easy task, it did occupy too much of my force for too long. Indeed, Atalanta all but destroyed the Norse skirmishers on her own over the course of the six turns. 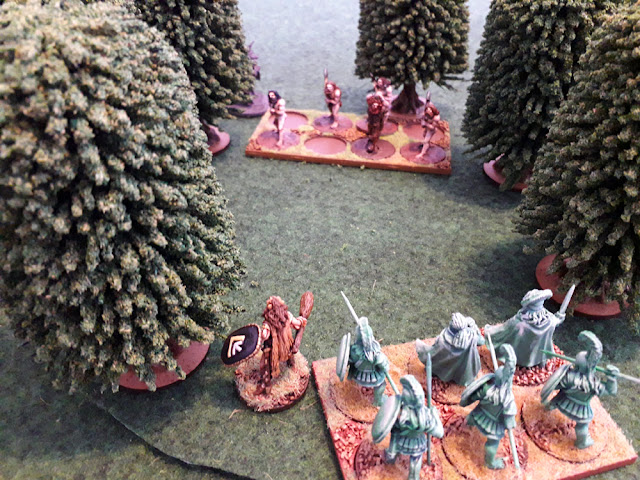 While they were keeping busy on the hill, Herakles led the shades into the grove where Thor and the berserkers had already taken up positions, despite Athena's judicious use of lightning to thin their ranks. Thor also used lightning in the game; only twice, but very effectively. One shot to kill a single dryad, meaning the tree-ladies could no longer bolster Athena with their prayers, and the second bolt killed Herakles on the spot. Bum. 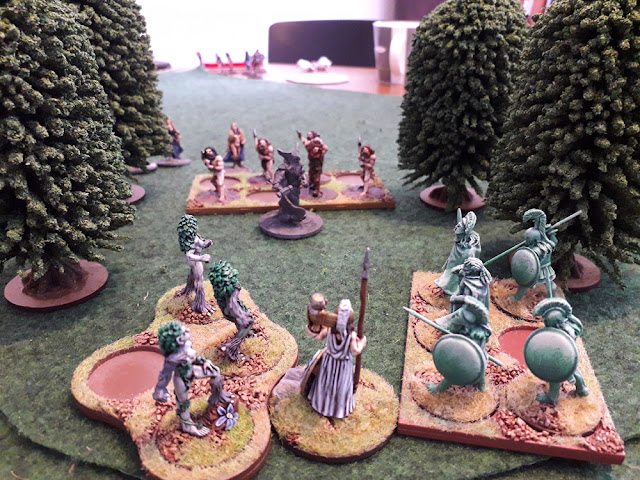 Athena then decided it was time to join her forces in the woods, bringing up the useless dryads as extra supports. 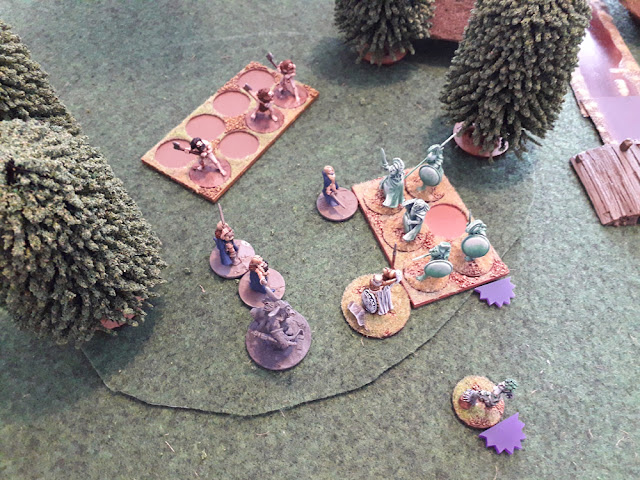 Then, in a classic example of declaring-the-use-of-a-rule-before-reading-it, Athena demanded that all around her should tremble before her might. I assumed that the rule would effect all those damned valkyries too. Apparently I assumed not. Then, to rubb salt into the wound, the Norse berserkers passed their tests and were unimpressed. Meanwhile, my shades and the last dryad were all awed. 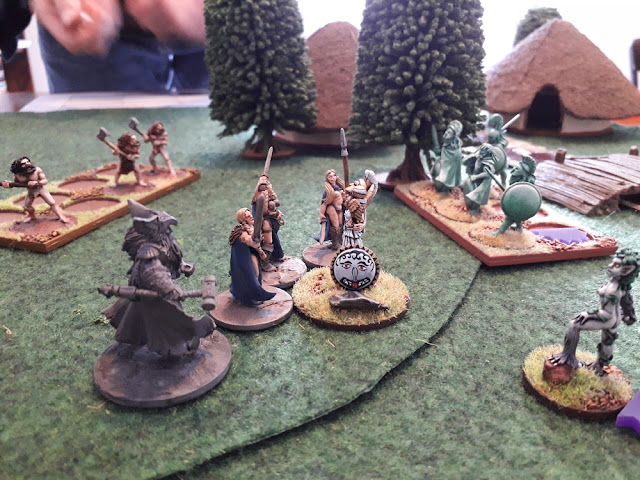 And that pretty much spelt the end of my game. Again. While Athena proved mightily formidable in battle, her allies were driven from the woods, while the hypaspists and Atalanta failed their activation rolls and never made it in among the trees. Chalk up another win for the mighty Thor!
2 comments:

Email ThisBlogThis!Share to TwitterShare to FacebookShare to Pinterest
Labels: Of Gods and Mortals

Last month Kurt Bowker posted something pretty great on the Ganesha Games/Song of Blades and Heroes Friendface page: Gronk, a whale hunting version of Palaeo Diet: Eat or Be Eaten. I have meant to share his ideas here for a couple of weeks now, but just haven't had a chance to post them up.

In Kurt's own words:

I had been playtesting my reskin of Ganesha Games "Paleo diet, kill or be eaten" (paleolithic hunting game) called 'Gronk!' about a year or so ago. Gronk is paleolithic or later tribal whale hunting. Skin boats and spears with wood floats. I had gotten 2 or 3 games in hunting just a whale with two boat crews. Taking notes. I had meant to start adding other sea creatures and work on the rules more but other things took up my time. 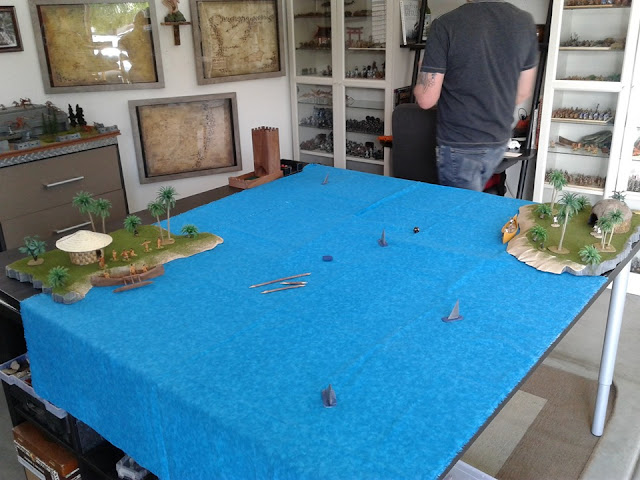 Joe Knight has been wanting to playtest the rules himself so after our Roman Civil War game we set up a Gronk playtest. We had two rival islands, one Maori and one Melanesian sitting on opposite sides of a sea channel rich in sealife. 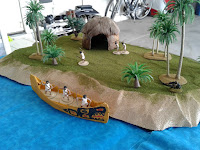 Joe had a lot of great suggestions we incorporated into the game. One was hidden sealife. We used 5 (?) markers to represent 'signs' of sealife that we could investigate with our boats to see what they were if they didn't move. If they were revealed we rolled for what kind of sealife it was, then took action to hunt them down and tow them back to our respective islands. 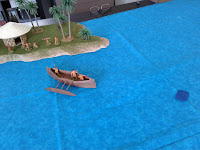 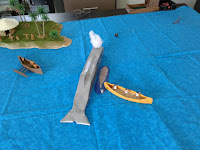 We had to make stats on the fly starting with my Stats for my big sperm whale, then his smaller whale, then a pod of Orcas and then Sharks. The size of the sealife is represented by a 'bulk' number. This number is how much food they will create. It is also the level of their health. The more bulk, the more wounds it takes to kill, but the more it will feed the hungry villagers.So the game was a competition between the islands to see who could collect the most points in 'bulk' of food before the game ended. We have not incorporated rules for attacking each other or stealing each others catches. Not yet anyways. One thing about Paleolithic hunting, weather on land or sea, the prey can sometimes fight back and be very deadly.This game was a wild ride of all kinds of crazy! I managed to wound two sharks but Joe was able to kill them and tow them back to his island. He thus had 12 bulk points of food.

I had several crewman get knocked overboard. One drowned and another was eaten by a shark that Joe antagonized! (You bastard!)

In one attack, from a Whale's tail, I also took a wound to my canoe. The boats can take two wounds and then they sink.I had to return to the island to get another crewman. (We had six, three on the island and three going out on the boat)Finally my luck turned briefly. I killed the small whale! "Whale Ho!' and towed it back to my island. I had help killing the whale in that it was attacked twice by a wounded shark! 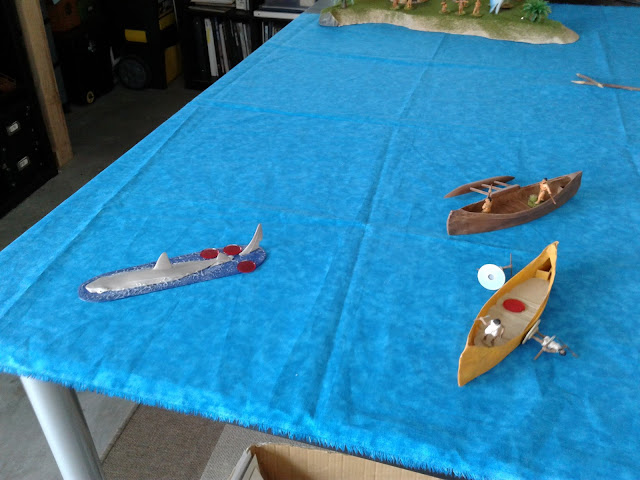 So now I had 10 bulk points and Joe had 12. There was only the one shark left and we chased after it! Joe's boat was handicapped as one of his men drowned. It was a crazy race from one side to the other and back again, both of us trying to get that last wounded shark and win the game.

I was attacked by the shark and had a man go overboard and get eaten. Joe then drifted up on the beast and killed it. Three shark bodies hung from his village palms, worth 18 points.

The Maori Shark clan had earned their dinner!
2 comments:

The stealthy adventures of Herakles and Hippolyta

One of several ideas I am currently tossing around for games is a Palaeo Diet derived game of stealth that, should it come to fruition, will ultimately be themed around Robin Hood (and similar outlaws) fighting against oppressive local authorities. I have a clutch of Normans and outlaws sitting on the shelf waiting on paint (and time, that most irrecuperable of concepts). In their absence, but with a few core mechanics nutted out, I sat down to play around with some Greek proxies.


The rules worked very well for a first run through. Obviously, Palaeo Diet is a stable core, but AI humans need to handle differently to prehistoric beasts, so the game mechanics need a bit more nuance. Having a front and rear arc allows for some fun stealthy moves and sneaky back-stabs, but the risk is always there that an enemy ('villains' as they are termed) will turn at any moment.
6 comments: