I don't do a lot of sci-fi gaming, and when I do, I tend to play 6mm. However, over the last couple of years, an increasingly the last few months, I have been working away at three forces for sci-fi skirmish games using 15mm figures. I haven't decided on a rule set yet, but Grimdark Future: Fire Fight seems to work very well so far. 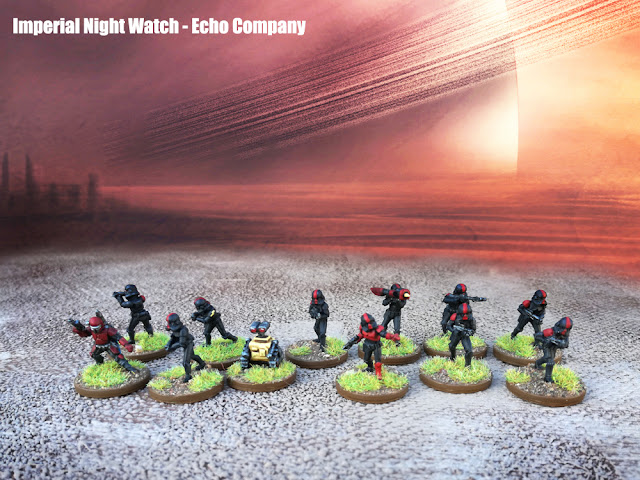 The first faction is the Imperial Night Watch led by Capt. Pax Concordia. These are nominally a special forces unit for the European Empire (my main 6mm Horizon Wars faction), although there are other empires that I'm sure they'd fit in with... The bulk of the minis are from the Space Pals range (possibly OOP?) from Highlander Studios. The wee W.A.L.L.I.E. style droid is from Ground Zero Games. 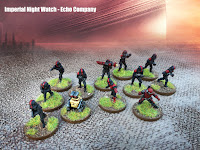 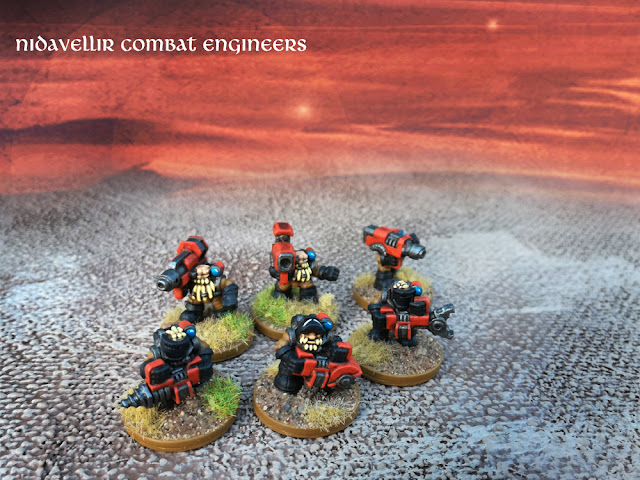 These engineering space dwarves from the Nidavellir system are led by Sgt Grimm. They. Are. Absolutely. Class. Wee. Sculpts. These are 15mm versions of the Onslaught 6mm Grudds, both available in the UK via Vanguard Miniatures. They stand about 11mm to the eye, so they are noticeably shorter that human sized figures, but they are about twice as wide. 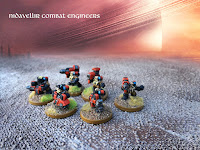 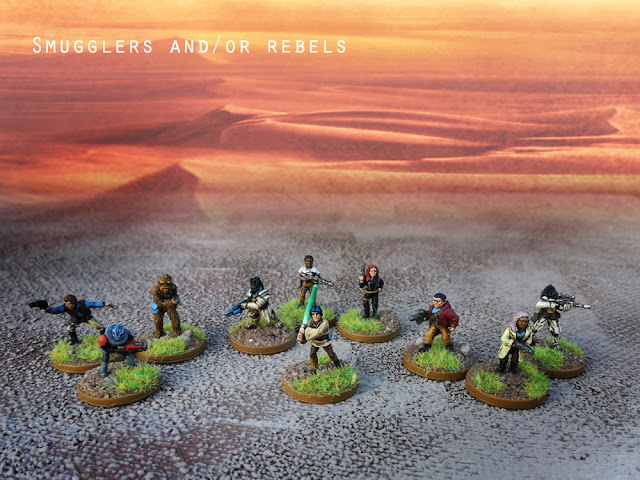 The last faction are a cell of smugglers who may or may not also be rebels led - either way - by a mystic space wizard with a laser sword. They come from a variety of sources and have little in the way of uniformity, so I ensured that each of them wears something sky blue to act as a force identifier. 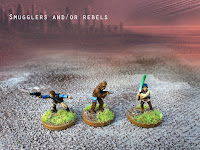 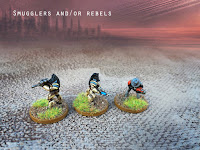 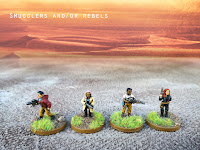 Email ThisBlogThis!Share to TwitterShare to FacebookShare to Pinterest
Labels: Sci-Fi 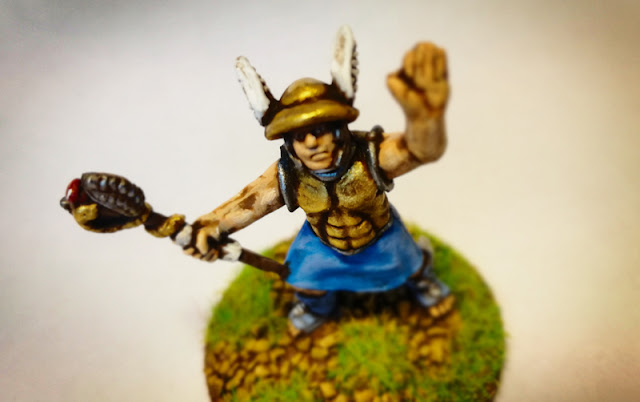 In Of Gods and Mortals, the rules really stress Hermes' speed over any sense of power. He is one of the weakest deities in the game, but he is hard to shoot and can move to anywhere on the table so long as it is an uninterrupted straight line. That means that he is really useful support asset, adding the equivalent of eight mortals to any melee. I'm really looking forward to giving him a whirl!
2 comments: 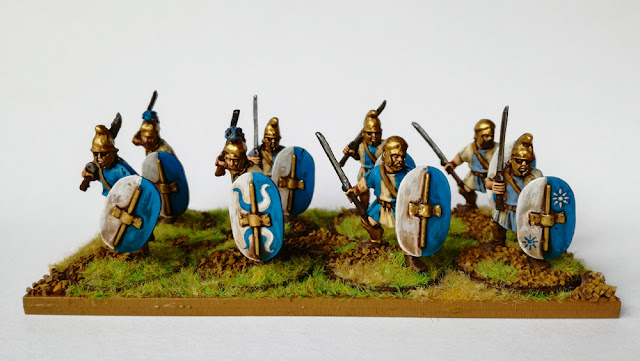 It has taken some time (months indeed - 28mm always do take me a while), but my Hellenistic Thracians are finally finished and ready to fight for their gods. The miniatures are from Crusader - Northstar, and decent wee figures they are too. I'll be using these gentlemen (in the loosest sense of the word) for Of Gods and Mortals.

There are no official Thracian profiles in the rules, but the unit building rules in the back allow you to customise profiles. From all the options available, I think that the hammering blow rule should approximate their use of the rhomphaia - those nasty looking curved blades. Therefore, I'll be using the following.

Email ThisBlogThis!Share to TwitterShare to FacebookShare to Pinterest
Labels: Hellenistic, Myth, Of Gods and Mortals

Grimdark hive of scum and villany 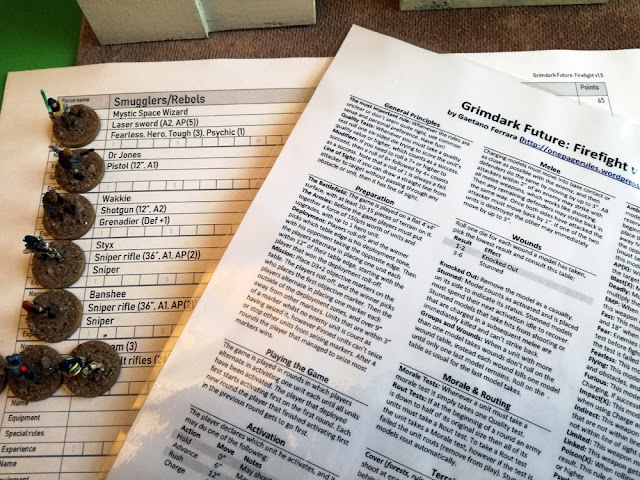 I've long had a small collection of 15mm sci-fi miniatures painted up for skirmish games. Then, last week, Andrew gifted my some 15mm sci-fi scatter terrain and a few bunkers and other small buildings which now allow me to future-up my ancient city Antiocheia Mikros. So, this week, I set up a table (along with my son's Slave One toy with is roughly to scale) and tried out a few turns of Grimdrak Future: Firefight by Gaetano Ferrara. The rules are freely downloadable and seemed simple, but effective. They are written for 28mm miniatures, so we swapped out inches for cm to convert to 15mm figures. 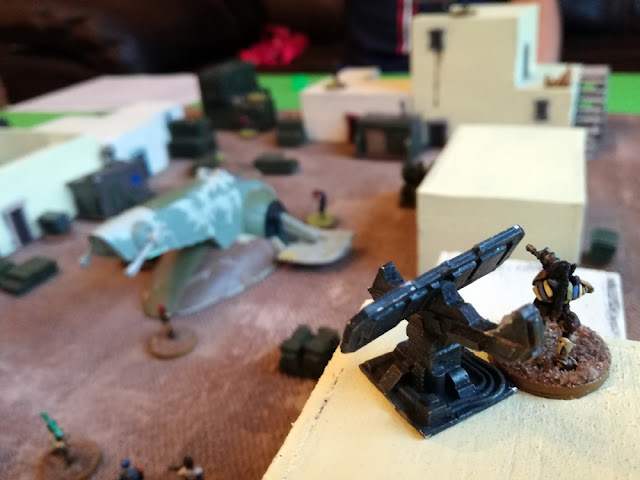 I took a force of smugglers/rebels, while my wee lad controlled the Imperial Night Watch special forces. The rules are very definatley geared to the GW futuristic game set in the 41st millenium, but the force lists are pretty flexible allowing you to build most generic sci-fi tropes. 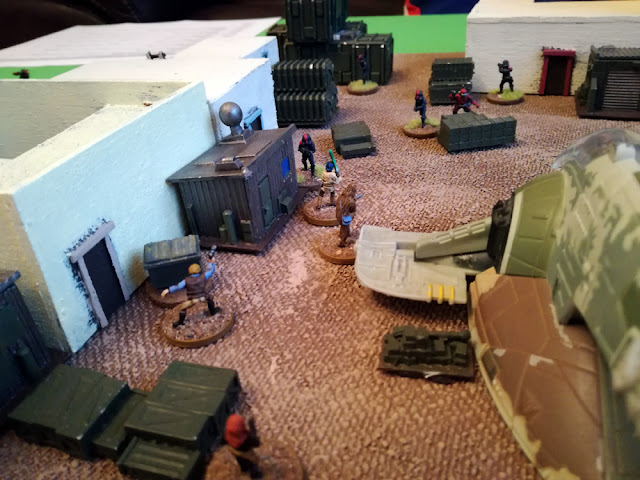 I played more aggressively than the wee boy and took most of my forces through the alleys and the landing area, leaving only a sniper on the rooftops. The lad took up a pretty defensive position and shot at me. A lot.

Although I managed to take down his trooper packing a grenade launcher, the storm troopers were handier with their blasters and took down my fluffy humanoid alien and two of my assault-rifle wielding fire team. 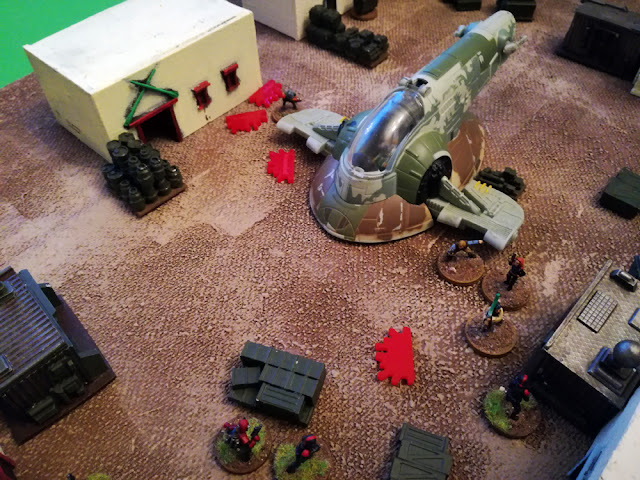 We only played four turns, but everything seemed to work well mechanically. Lots of shooting took place, we had quite a number of hits, but not a huge death toll. That is a good thing in my books. For a rule set that, all up, covers two pages, these were pretty damned impressive. I'll certainly play again.
No comments: