It is the third decade of the 17th century. While the Spain of His Most Catholic Majesty, Philip IV, squanders its riches in fruitless wars against heretics and rebels in Europe, her possessions in the New World are increasingly under threat of sea-borne depredations from various piratical nations.

Into this New World of sweat, blood and God enters the king's royal agent, Don Diego Diablo del Mar, sent to bring order to the defences of the colonies and lead the king's subjects to righteous victory.

Our hero has word of the approach of a flotilla of Calvanist Hollanders cruising along the Miskito Coast, searching for trading partners among the local savages and seeking to undermine the commercial hegemony created by the Grace of God and held by good king Philip. It is about time that somebody called out the militia...

The following post is design as an example of the recruitment process for Irregular Wars: Conflict at the World's End. It will outline the basic concepts of battle recruitment and provide a specific example of a Colonial Spanish battle (a small army) for a so-called 'set piece action', an engagement between two opposing battles where the only objective is the defeat (and humiliation) of the opponent.

The first job of the player is to draw a chance card from the deck of 32 cards provided with the core rules. In this case, Don Diego has drawn the 'Inspiring Lord' card:

The Lord’s well spoken words stay
even the most shaken hearts. +1 to
all rolls relating to the Lord during
the RALLYING & CURSING phase
As a result, the lord (or leader) of the battle, i.e. Don Diego himself, will be more effective when rallying his men during Rally phases throughout the game.

The player is next required to recruit companies to lead into battle. The Colonial Spanish appear on page 8 of the battle lists. The list has two sets of compulsory company types which must be recruited by the player. The first (combining conquistadors with rodeleros) applies only to battle recruited in or before 1606; the second (herreruelos and militia pike) applies only to battles recruited in or after that year; players wishing to use a Colonial Spanish battle in 1606 are at liberty to decide which list is more appropriate.

As our game takes place in the 1620s, the player uses the second list. Don Diego therefore has immediate access to two companies of herreruelos (armoured cavalry fighting with sword and pistols - these might be considered the colonial aristocracy), and two companies of militia pike (the standing colonial militia drawn from free colonists, indentured servants, African slaves, Moriscos and Mestizos).

In a set piece action, each player has access to five 'options' from the list of possible optional companies. For the Colonial Spanish, this list includes the following:


Don Diego decides that he will first call out the militia shot. As d3 militia shot are available, he must roll 1d3 (usually a d6 or six-sided dice treating rolls of 1-2 as a one, 3-4 as a two and 5-6 as a three) to determine the number of companies who are able to be mobilised. In this case he rolls a d6 and scores a 3; he may thus field two companies of militia shot in the coming engagement.

He decides to supplement the organised militia with d3 armed mobs from the local citizenry. Again, there is the possibility of one, two or three companies of mob being recruited depending on the recruitment dice roll. As he rolls a 2, only a single company of armed mobs will be available for this game.

As the Spanish will be facing heretic Hollanders (whom all men know are the servants of the Antichirst and have been forsaken by God), Don Diego recruits a priest to provide extra blessings to his men in battle. Only a single priest may ever be recruited in the Colonial Spanish list so there is no need to roll a dice.

To give his men a little more profane punch, Don Diego decides to hire d3 companies of Indian mercenary warriors. On this occasion he scores a 5 on his d6 dice roll and is therefore able to recruit all three companies available.

Finally, the Don uses his last few dubloons to recruit a saker battery to provide some long range fire support. As with the priest, only a single battery of sakers may ever be recruited in a battle of Colonial Spanish, there is no need to roll a dice, their appearance on the battle field is assured.

As a result of his mixed rolling during recruitment, Don Diego Diablo del Mar has assembled a battle composed of the following 12 companies: two herreruelos, two militia pike, two militia shot, one armed mob, one priest, three Indian mercenaries and one saker. Had the rolling been better he may have been able to field additional companies of militia shot and armed mobs, but it also could have been worse and seen less militia shot and less mercenaries.

Early in the new year I will post a detailed battle report of Don Diego's altercation with the Hollanders and recount the various deeds of courage and cowardice on both sides.
1 comment:

Just a quick update to show off a little 28mm Eureka Amazon that I picked up to round off my Wardens of Olympos warband for SBH. She has been painted up for some time, but it is only today that I managed to take photos of her, and a bunch of other stuff for posts in the very near future. 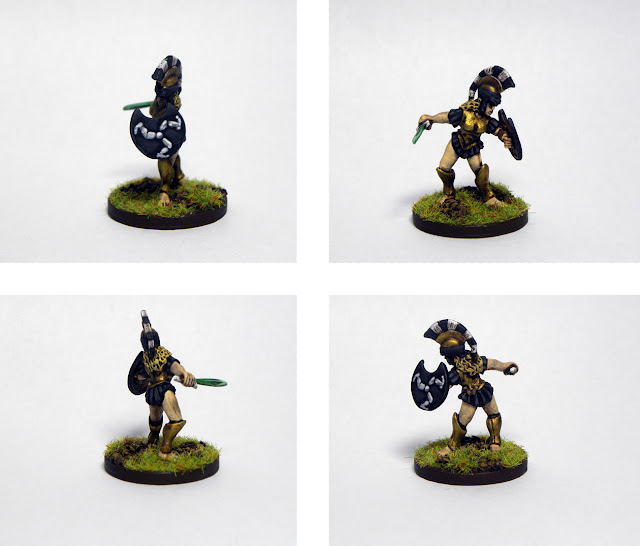 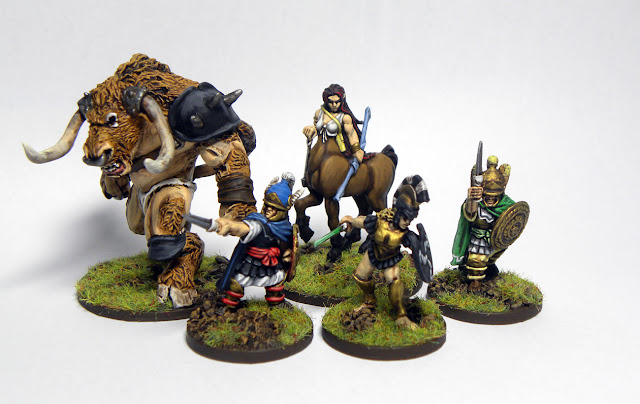 She survived her first battle last month. Bless her. As always, she and her gagng can be followed over at the battle honours page HERE.

Oh, also I'd like to take the opportunity to wish all readers a festive holiday season and a fruitful New Year!
1 comment:

About a month or so ago, a couple of my Antipodean comrades-in-miniature-arms did a little playtesting of the Hoplite lists for Irregular Wars: Hoplite Ascendancy, the Classical Greek adaptation of my Renaissance rules. I have been meaning to post the results since then but have been exhausted coming in out of the frozen mud in the evenings and haven't quite managed to post before now. Hypothermia is seriously exhausting....

It was a classic match up between Michael's Athenians and Steve's Spartans. Michael set up terrain, placing two large woods a large marsh and a large area of rough going. 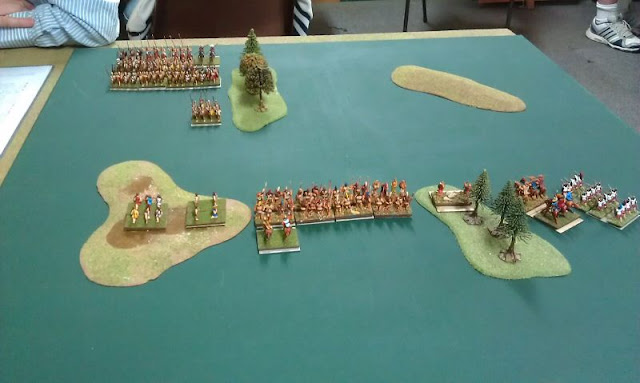 The intial setup. Athens vs Sparta, with Athenians in the foreground. 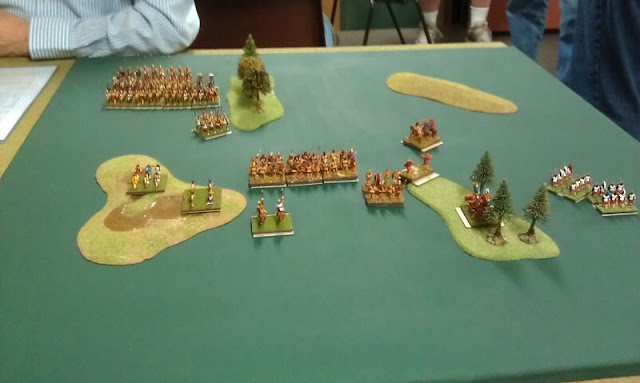 Armies advance to do battle. 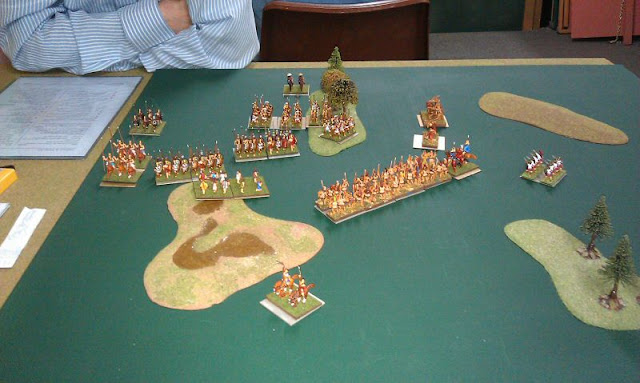 Some more maneuvering. Note that one of the Athenian Hoplite units decided to go out of control and head east.. 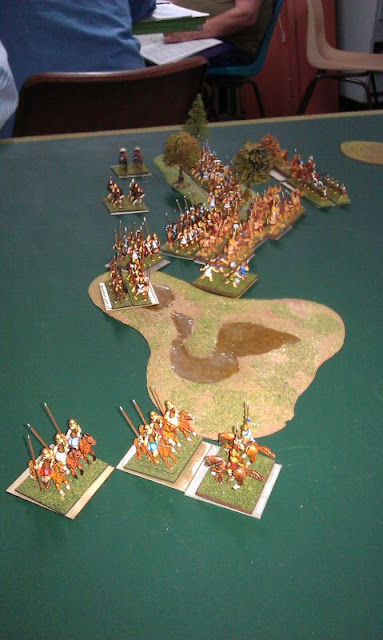 Battle is joined, with the Spartan cavalry trying to out flank the Athenians. The game at this point became a slogging match as the hoplites just pushed and shoved for little effect. 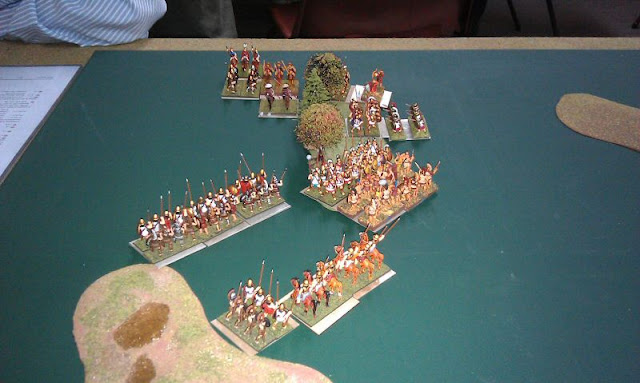 It wasn't until the Spartans gained the ascendancy on the right flank and was able to get my two Hippeis behind the Athenian lines that it started to unravel for the Athenians. Meanwhile on the Spartan left flank, the Thracian horse and peltasts held up the Athenian Hippeis until Steve was able to withdraw some hoplites and shore up that flank. 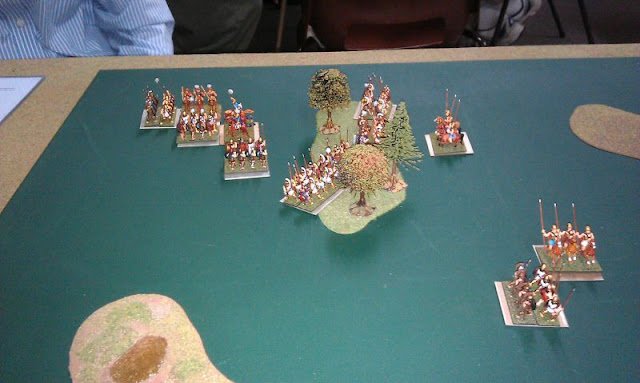 After the game, the Steve posed the following questions and comments (in Italics). My responses follow.

A comment regarding the lists. The Spartans were able to field two Hippeis and a Thracian horse, which was exactly the same as the Athenians. Should the Spartans have a restriction re mercenary cavalry or did they really field as much as the other Greek states?

Regarding cavalry, with the exception of some of the northern poleis, Peloponnesian states (generally allies of Sparta) had as good a potential to field mounted troops as their opponents, even if Sparta itself never fielded very many. Boiotians tended to field better cavalry than southern Greeks (and more of it), the Thessalians were the best mounted Greeks of course and were almost on par with the Macedonians.

Depending on the theatre of the war, Spartans might have Greek allied cavalry from the Peloponnese, from central Greece, from the Greek cities in Thrace or Asia Minor etc so there's no real issue with a Spartan led force running multiple cavalry companies.

During the game, the Spartan hoplites advanced through and fought in the terrain as they still had the advantage over the Athenian light troops. We were unsure as to whether this was your intention.

In short, no. The balance that will have to be achieved (through play testing) is how to to treat Hoplites. In rough terrain they already drop their movement down to 1" per turn, so Michael's peltasts should theoretically have been able to skip around flanks and pepper you with javelins.

Perhaps a further melee modifier is needed for hoplite companies; maybe -1 in rough and -2 in woods?

So Hoplite Ascendancy is still obviously a work in progress, but it's good to see the game evolving and adapting beyond its original mandate.
3 comments: