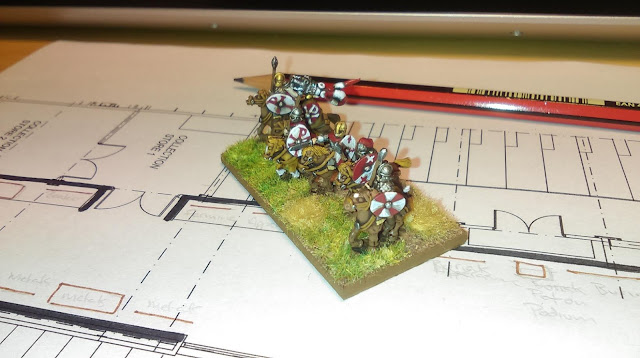 Having faced Dux Bellorum defeat with my horse-heavy Romano-Britons once again last week I decided there was nothing for it but to rejig to army. As a result - more noble riders! I never suggested I was very clever. I'm still not sure how to use them, but I'll be damned if I don't keep giving it a go. They are available after all, so they must be good for something. Right?
4 comments: 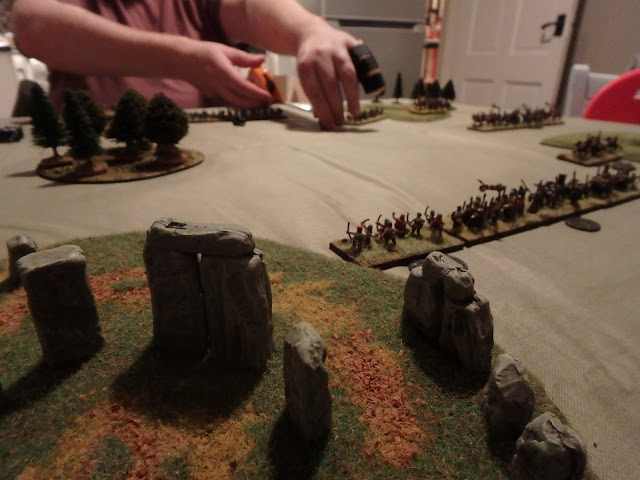 This week I was delighted to get my Dux Bellorum 10mm armies back on the table. Still one of my favourite games, still my favourite armies, but not used anywhere nearly as often as they should be. As we hadn't played in a while, we just threw down some terrain and randomly selected army tins.

I was lumped with the Romano-British of Rheged again who - though glorious to behold on the battlefield - have a pretty bad track record against the Irish, who would be commanded by Brett. The Romano-British are a nuanced, mixed force. The Irish much more of a one trick pony/blunt instrument. But it's a good trick, and blunt force trauma always hurts. Brett also decided to soak his boys overnight in booze, making use of the Mead strategy. That meant his aggression factor when through the roof, compromised slightly by a lack of unit cohesion. 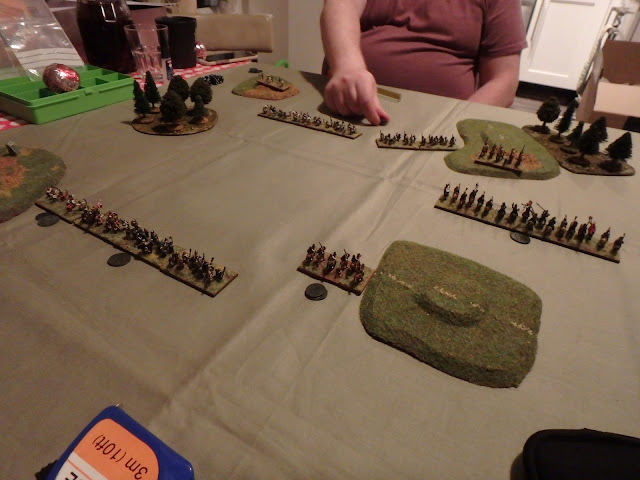 In the opening turns, my mounted companions and noble riders headed out to destroy his riders before the infantry clashed. As he broke his line of warriors up to lend support to Irish riders, I brought up my own common riders to intervene. 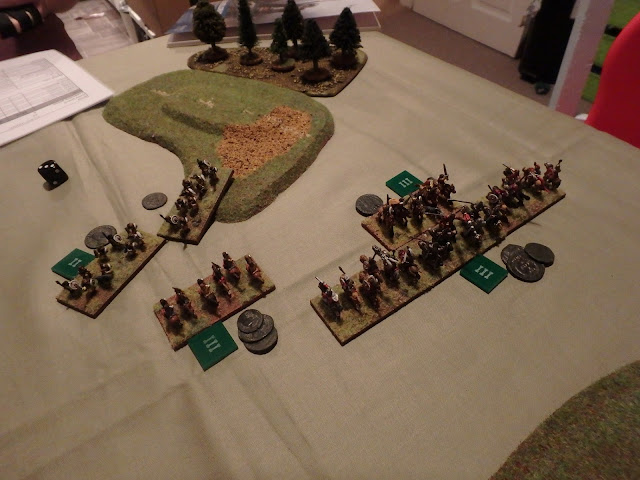 Before the Irish warriors could catch my noble mounted group, I threw my common riders into them with a full whack of LPs to aid them in combat. Meanwhile the nobility of Rheged charged square it the Irish riders. Rather than riding them down them (very much my intention and expectation), I rolled very poorly and Brett rolled lots of sixes. I was stopped dead in my tracks. My common riders were predictably beaten when faced by two units of noble warriors. 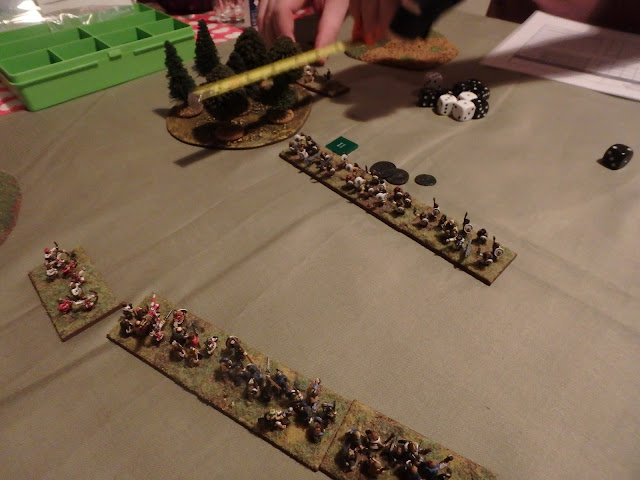 Over on my left, Brett sent his skirmishers off through the woods as my shield wall wheeled to take on the rest of his noble warriors. The Romano-British archers got off one good volley at long range before the lines crashed. 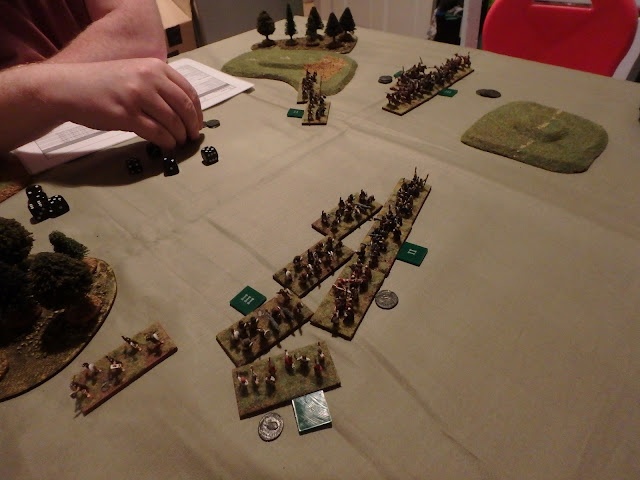 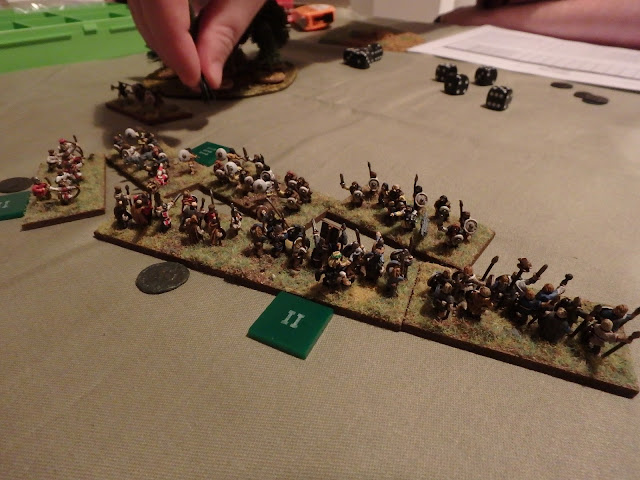 Another view of the infantry clash. My archers hold on surprisingly well against noble warriors, while my own noble shieldwall takes a hammering. It is always easy to blame the dice, but Brett would admit he rolled a vast number of 6s that game! 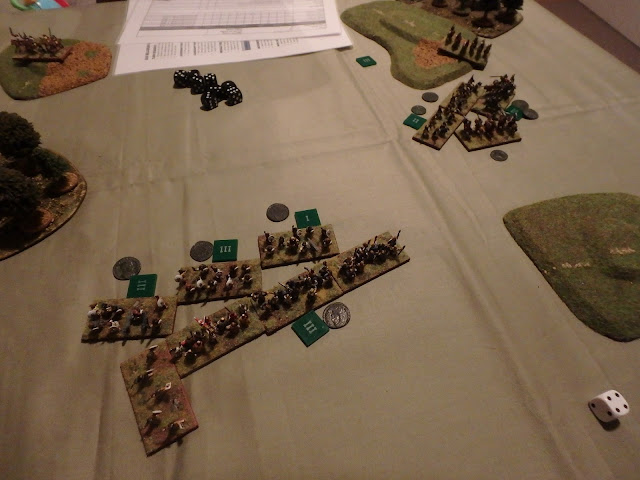 Crisis point. Having finally driven off the pesky Irish riders, my mauled companions and their noble friends now face Irish noble warriors.  On my left, my archers have been dispersed and the Irish skirmishers now harry the flank of my shield wall. 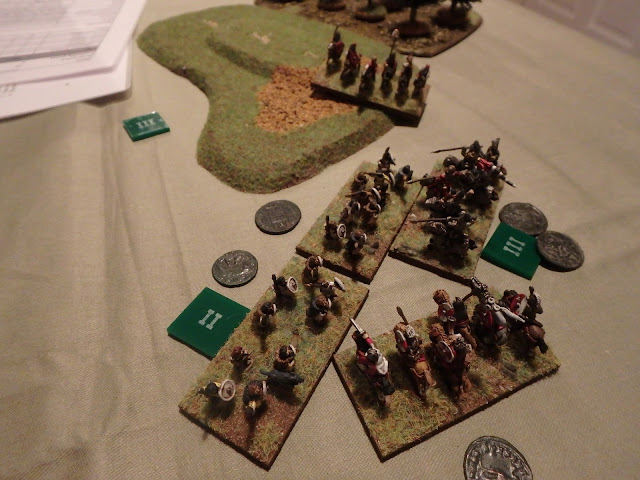 One of my noble riders heads up the hill to prepare for a flank charge. It would prove utterly  worthless as the Irish noble warriors managed to break my companions. Now, leaderless, my army was hanging on through sheer determination. 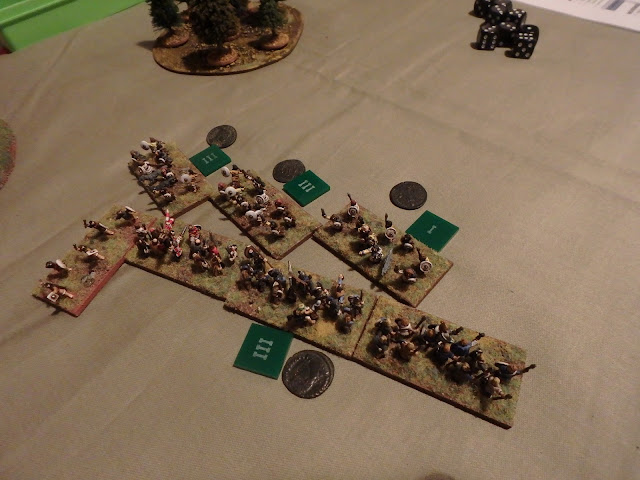 On the left, the Irish cleave straight through my noble shieldwall, removing half my army and forcing a morale check. In the ensuing panic, the left most shieldwall broke and fled leaving just one shieldwall and the two noble riders left on the table. The damned Irish had only lost their riders. At that point, I sounded the retreat and left the Irish in control of the table.

What can I say? Brett played aggressively. His Mead strategy gave him an extra dice each time he attacked while he used his Leadership Points to soak up damage. I relied on my higher protection values to help me out in the melees, but to no avail when he rolled 6 after 6 after 6. A great wee game of a great wee game. Dan Mersey has released a number of games since Dux Bellorum, but I hope that he is still immensely proud of this one. A true gem.
9 comments: 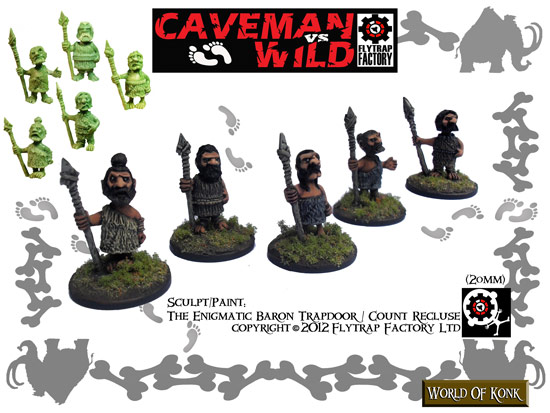 I saw the range of cavemen (not meant pejoratively) by Kiwi company Flytrap Factory some time ago, back when they first came out. I thought they looked fantastic but resisted. Until last night when I crumbled and ordered the two packs shown here (five hunters and three mammoths). Not sure exactly what I'll do with them yet, but they are just too great to ignore any more.

Flytrap Factory have their own rule set for the range - Caveman vs Wild - which sound fun, but are currently being revised in readiness for a relaunch with an impending kickstarted which looks like it will bring in more characters, cave bears and the like. I have also just picked up Tusk from Wessex Games which, while ambiguously written in parts, looks like it will provide a fun solo or multiplayer game. 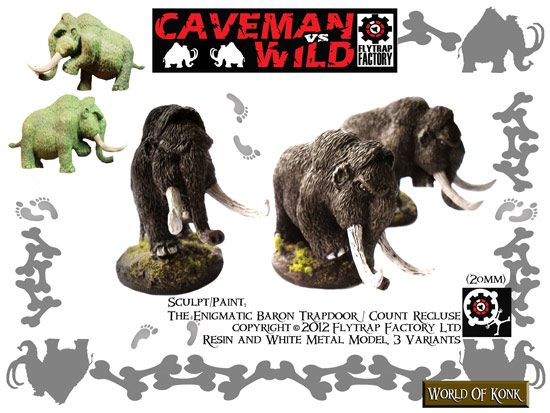 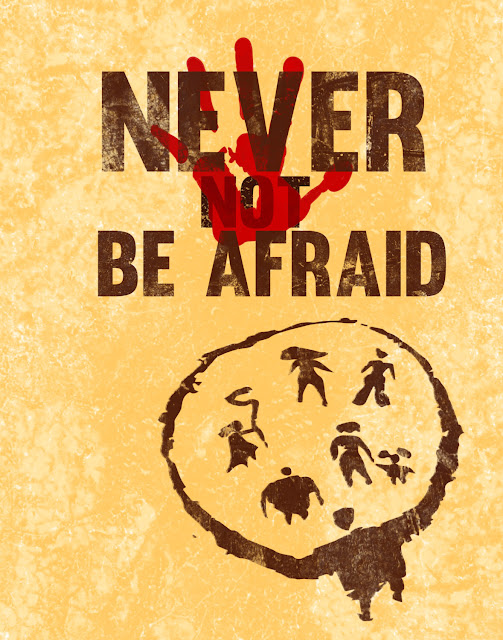 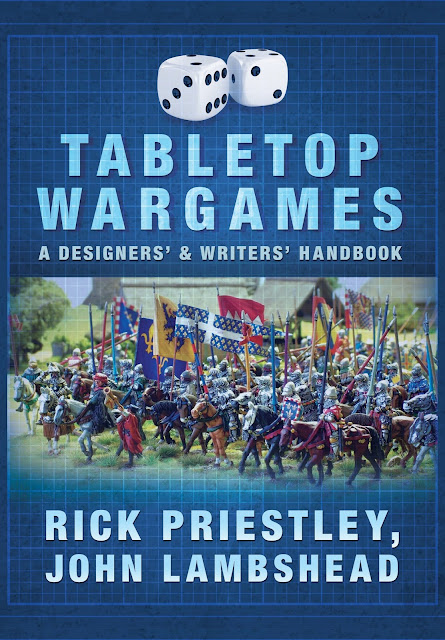 As many readers will be aware, Rick Priestly of Hail Caesar fame (I'm reliably informed that he's also written some other stuff... ;) ), together with John Lambshead, recently published new rule book for wargaming. Not a wargame itself, but a handbook for wargame designers: Tabletop wargames: A Designers' & Writers' Handbook (2016, Pen & Sword).

I fully expected that Andrea Sfiligoi and Ganesha Games would warrant a mention in the volume, and indeed he does, with all Andrea mentioned in text and Ganesha titles making it into the bibliography.

However, what I wasn't expecting was that I would be mentioned, specifically relating to Song of Shadows and Dust. Of course, they get the name muddles up a little in text (correct in the bibliography), but all the same... it's rather nice to get a mention and to be used as an example. 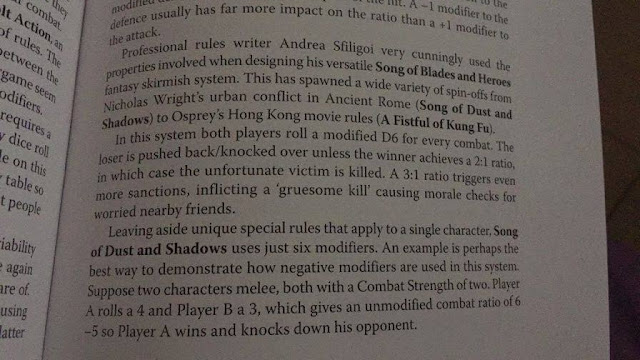 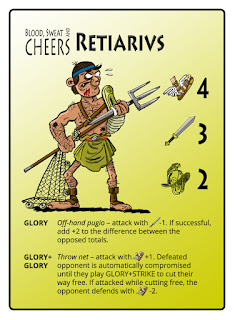 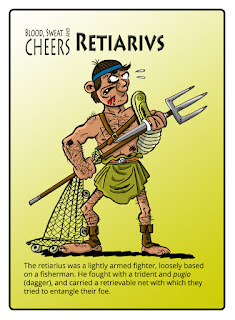 Any thoughts on these as the front and back of 'gladiator' cards for the new gladiator themed, card-driven game I am working on for Ganesha Games?

Obviously, this card is for the retiarius, there are nine other gladiator styles included. The main side of the card provides the attributes for the fighting style, as well as the two unique moves that the gladiator can perform. The reverse of the card gives a very brief description of the style.
No comments: