Flicking through my old photos, I noticed that I had quite a few relating to my gaming interests that would be worth posting on the blog. This post marks the first in a series of three dealing with replica 16th century ships. I felt it was only right to start with one of the most famous of all English galleons - the Pelican, better known as the Golden Hinde. 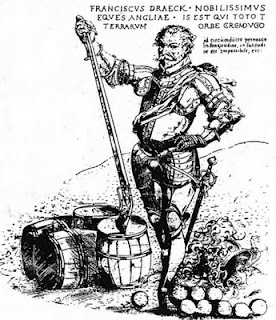 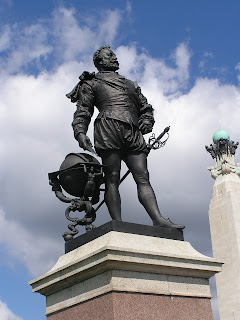 In 1577 Francis Drake left England with a fleet of five ships, including his flagship, the Pelican, with the intention of raiding and pillaging the unprotected Pacific coast of the Spanish New World colonies. Only the Pelican made it through the Straits of Magellan (Spring of 1578) and was renamed the Golden Hinde in reference to the heraldic crest of Drake's patron Sir Christopher Hatton.
Drake and his men played havoc with Spanish shipping and ports in the South Seas. The most famous encounter was with the Spanish galleon Nuestra Señora de la Concepción (Our Lady of the Conception), also known by her nickname - the Cagafuego or Cacafuego (Fire-shitter) - on 1st March 1579. The hold of the Cacafuego was said to contain 13 chests of of plate, 80 pounds of gold and 26 tons of uncoined silver. The crew of the Golden Hinde were forced to abandon their ship's ballast in order to take it all on board. 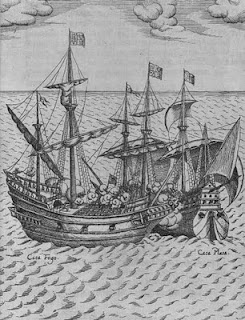 From the west coast of the Americas (Drake claimed California for Queen Elizabeth), Drake sailed east to the Indies, returning to England in 1580. Drake and his men were thus the first Englishmen to circumnavigate th globe. He delivered a 4,700% return to the investors of the expedition and received a knighthood from Queen Bess via proxy. He was knighted by the French ambassador so that the Queen might distance herself from accusations of piracy.

Estimated dimensions of the Golden Hinde are as follows:


A full sized replica of the Golden Hinde was built in Devon in 1973 and is now birthed permanently at Southwark in London. The official website of the London replica can be found here. The site for a second replica based at Brixham, Devon, can be seen here. 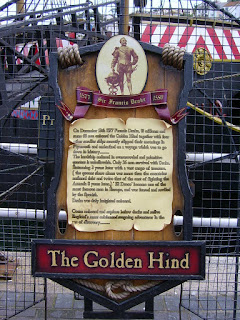 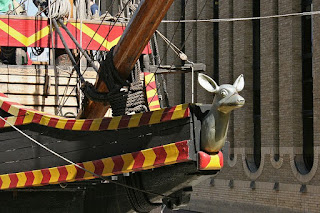 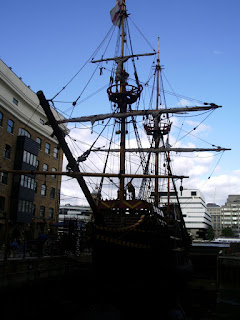 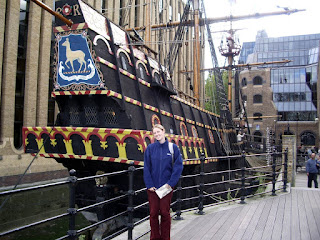 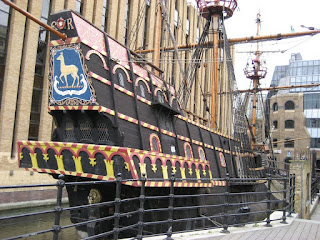