Having responsibly discharged both my immediate academic responsibility (an overdue chapter) and hosted an antipodean guest over the last week, I was finally able to get back to the desk and do a little painting this weekend. While my mini-Antioch continues its slow growth - I keep thinking that I've built enough houses but I'm not sure that such a thing exists - I decided to get to work on my selected 15mm gladiators.

The first batch of six to get a lick o' paint is a fairly representative group, both in terms of manufacturer and fighting style. Here they are together to give an idea of how they scale up. They have not yet benefited from a spray of Dullcoat. 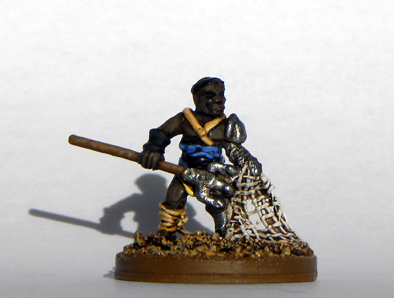 This is one of my favorite sculpts of a retiarius. The trident head is a little chunky but I love the way the net is rendered. What I was surprised to find out - and I only noticed when I started to paint him - was that the poor chap has no ears. I suppose that an interesting back-story will sort that out... 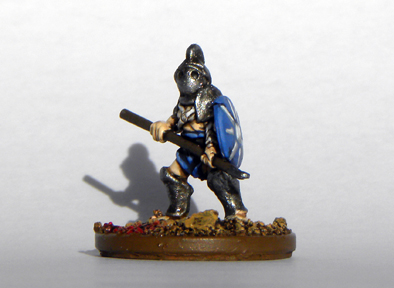 This guy has a spear. That is the only lead I had as to what kind of gladiator he is intended to be. He doesn't have the heavy padded leggings that are usually depicted on most hoplomachi, nor does he come with a shield (I added that from my lead pile), but the pose is very dynamic and the ghostly helmet - designed to protect the face from a trident blow - is pretty cool. The photo doesn't really show it but the shield has a hand painted white eight-pointed star. 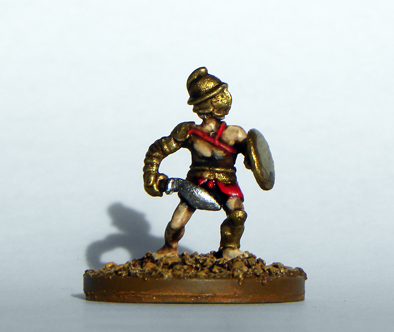 This Thaex, like all of the Outpost sculpts, is built for speed - like a whippet rather than a great dane... He painted up ok, but there is a definite difference in heft between him and his colleagues. 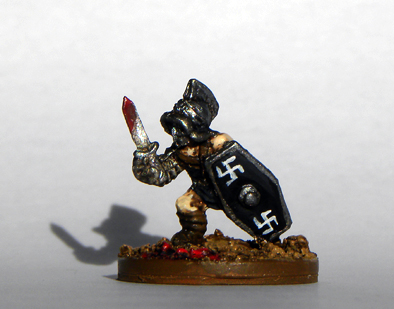 Some of the Mick Yarrow sculpts are a bit dated but I quite like this guy. The kneeling pose is again quite dynamic although the sword was far too long. I shortened this one by more than half to make it more like a gladius. I designate this guy a Samnite although he might equally be a murmillo. It felt really quite wrong painting the swastika designs on the shield. However, the symbol was widely used by most Indo-European populations before it was appropriated by that mustachioed, xenophobic, fascist, megalomaniac in the twentieth century. It was an especially favoured symbol among the non-Roman populations of South Italy such as the Samnites, so I though it would be appropriate for this guy. 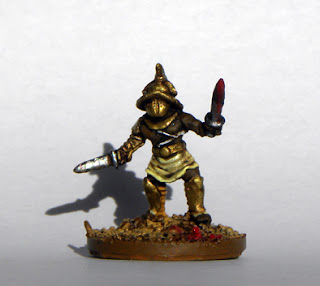 The Rebel gladiators are the largest figures in both height and heft - but also really nice. It is a shame that they only do four different sculpts.This dimachaireus wears the traditional fish helmet of the murmillo, but wields a second sword rather than a large shield. 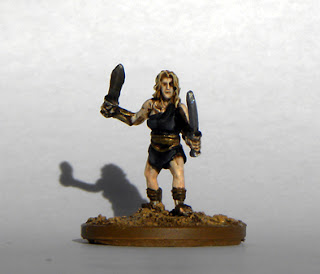 Every girl needs a little black dress. This gladiatrix is not the finest featured lady you've ever seen, but she still turned out quite well I think. I imagine her as a Belgic Gaul or perhaps a German.