Like the other Ganesha games based on the Song of ... engine, Song of Shadows and Dust uses three different measuring sticks to determine movement and ranges.

Initially, I used lengths of 10mm diameter dowel or 2.8mm diameter copper rod as my measuring sticks and they certainly did the job most adequately.

Eventually, then I was drawn towards the Litko Ganesha Games set which includes a triangular distance template. Litko produce these for both 15mm and 28mm scales. They also come with a range of other useful counters to mark wounds and entanglements etc. I bought the 28mm set for my Song of Blades and Heroes and Song of Arthur and Merlin games. Even though I use 10mm models for the latter, I still like to use the longer ranges.

However, when it came to Songs of Shadows and Dust, I found that I had a slight problem. I have always suffered from short articulated stumps where your common man has fingers. Don't get me wrong, they look like figers and have nails and everything else you'd expect, but they were never destined to do graceful things, like play the piano, or be a hand model for Nivea's latest skin care range. Anyway, narrow alleyways between model buildings can be slightly awkward when you have dumpy fingers trying to use measuring sticks and move models.

Early in playtesting fellow Wee Gamer, JB, made an enlightened suggestion which has proved highly successful. I attached my existing copper rod measuring sticks to little handles cut from balsa wood so that they form a T shape. I can now lower the measuring sticks into the tightest of spaces by the handles, thereby keeping my fingers out of the way. 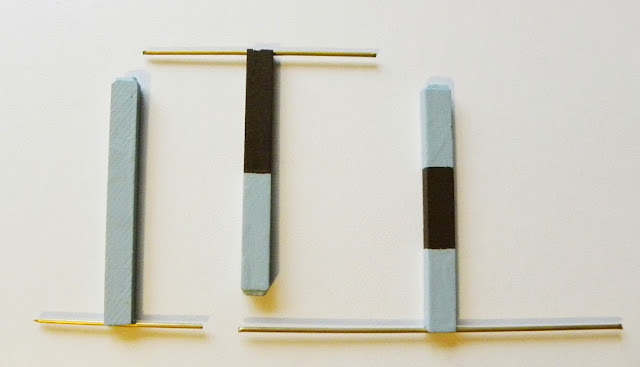 To aid in selecting the right stick in moments of crisis I used a bit of left over house paint to mark the handles - one colour for short, two colours for medium, and three for long. Cheap, simple and effective.