The man who would be king

The grey beard led the tribe for many long suns, and many long darks. Now his body lies, half eaten, in the cave of the great bear. The tribe’s hunters prepare for a contest to show who can provide most for their people; who will be the next chieftain.

A hunter who strikes the killing blow against the apex predator within eight turns will be proclaimed the new chief of the tribe. If the apex predator is still alive at the end of the eight turn, the chieftainship will fall to the hunter who struck the killing blow against the most grazers. This game is an individual challenge. While hunter’s may not actively attack other hunters, they may try all sorts of cunning ploys like driving fleeing or stampeding beasts into their friends, or stealing in to kill beasts already wounded by others. 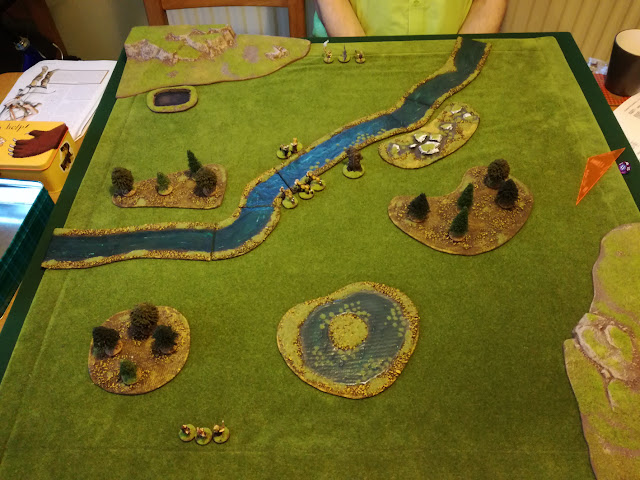 Above you can see the setup for the hunt, with a stream running down a lightly wooded valley. There is a small herd of sheep/goats drinking by the stream, and a cave bear sitting in the centre of the table. The hunters had earlier dug a great pit on one side of the alley floor, far enough away from the stream that there was little chance of flooding. Fergg, Snogg and Dogg are visible at the top of the picture, while Ogg, Urgg and Bow* entered from the opposite table edge at the bottom of the picture. We rolled for random hunter traits with the following results:

*I realise that there is no consistancy between posts regarding the spelling of names, but hey, it's prehistory. It's not like the names were ever intended to be written down... 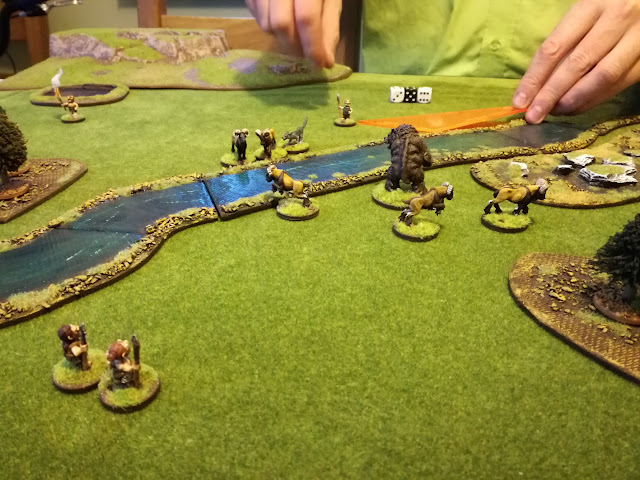 The first turn saw Bow, Urgg and Ogg make a mess of their stealthy approach, scattering the herd on their side of the river. Snogg and Dogg were much more effective - Dogg was especially clever, sneaking up on one of the sheep/goat ready to attack on Snogg's command. Fergg attempted to get upwind of everyone, hoping to start a fire like the prehistoric pyromaniac he is. 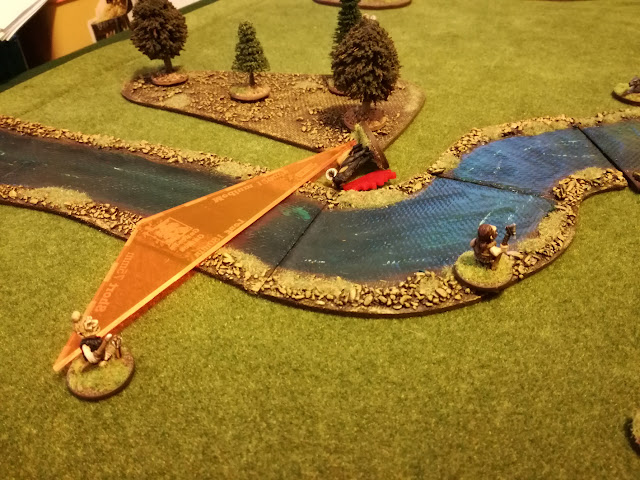 In the following turn, Dogg took a bite of his sheep/goat, scaring it off towards Bow who was able to snap off a quick shot, bringing the beast down and scoring the first kill of the game. The scent of fresh blood almost drove Urgg to madness - he leapt the stream just to savour the smalls, but was able to suppress his more animal instincts and managed not to gorge himself then and there. The site of blood also drew the cave bear in towards the kill. 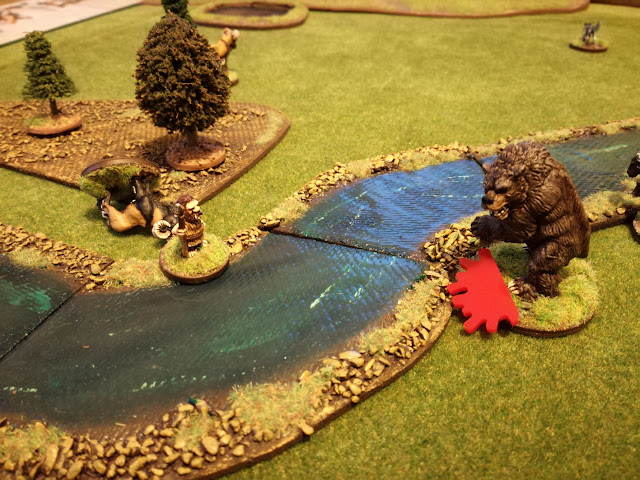 Urgg took advantage of the (somewhat illusory) protection of the river and hurled a well-aimed spear at the bear, prompting it to charge across the river in turn! One swipe, and Urgg was nursing a savage wound. 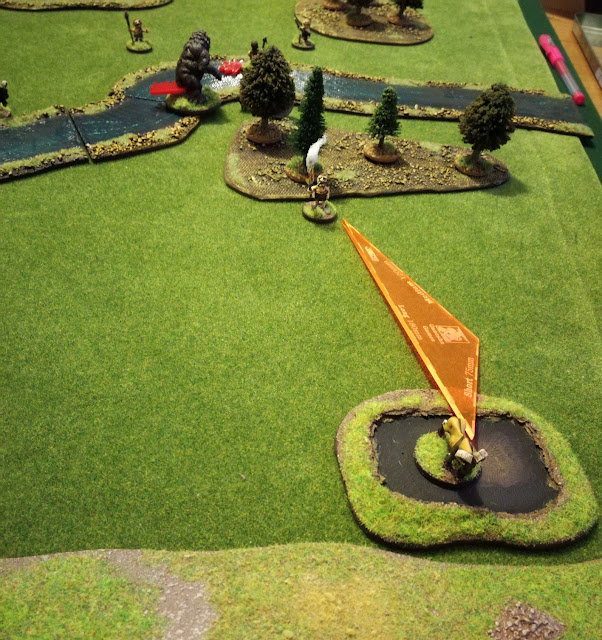 Meanwhile, that sneaky git, Fergg, took advantage of the scattering herd of grazers to wave his fire at one, causing it to flee straight to the bottom of the pit. 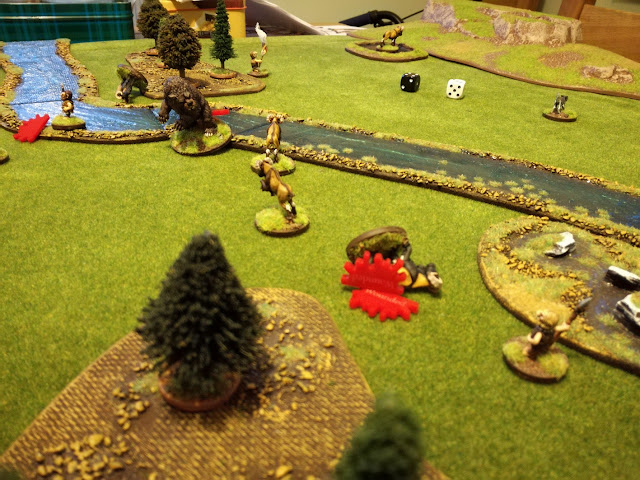 Back at the action-filled centre, Snogg managed to take down his first sheep/goat. The spouting plume of blood attracted the bear which left a very relieved looking Urgg to investigate. The kill tally now sat at one sheep/goat each for Bow, Fergg and Snogg. 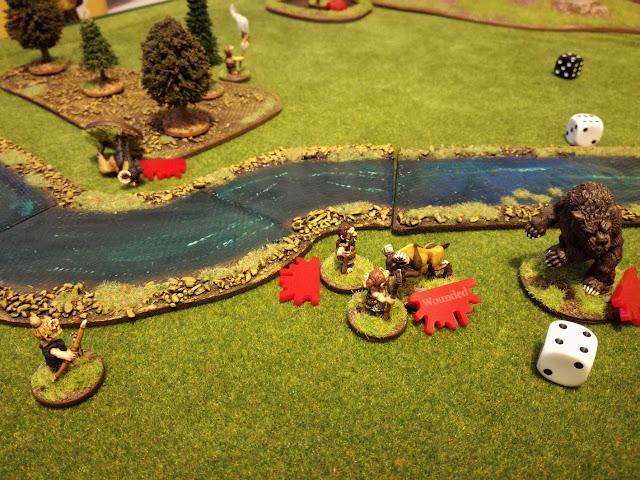 Not wanting to be left out, Ogg and Urgg collected their wits and sprang upon a fourth sheep goat. Ogg struck a blow, but the sheep/goat then fled back, past the bear towards Snogg. 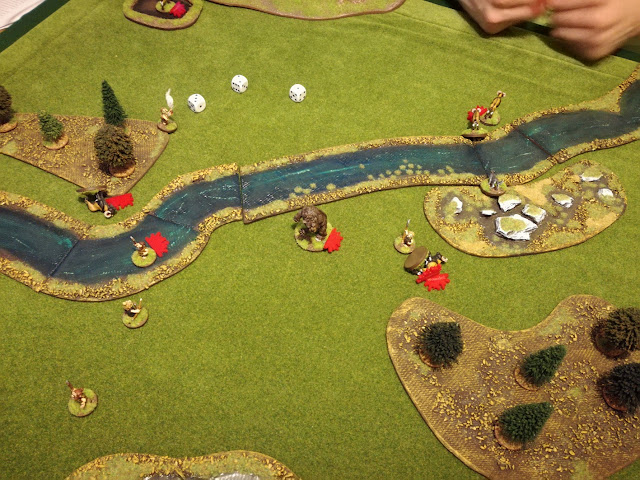 Bow took a shot at the cave bear which roared in anger, causing Ogg and Urgg to flee in terror. The last two sheep/goats (one of them wounded) had by now sprung across the stream. 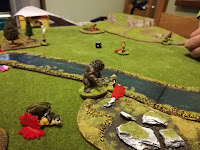 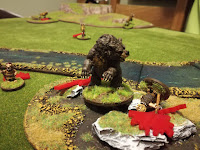 Snogg retreated to the cover of the tricky boggy ground by the river and hurled an optimistic spear at the bear, drawing the predator to him. One more swipe, one more wounded hunter. Snogg tried another optimistic attack and while his hit struck home, he was in turn dispatched for his trouble, sinking into a puddle of boggy, bloody mud. 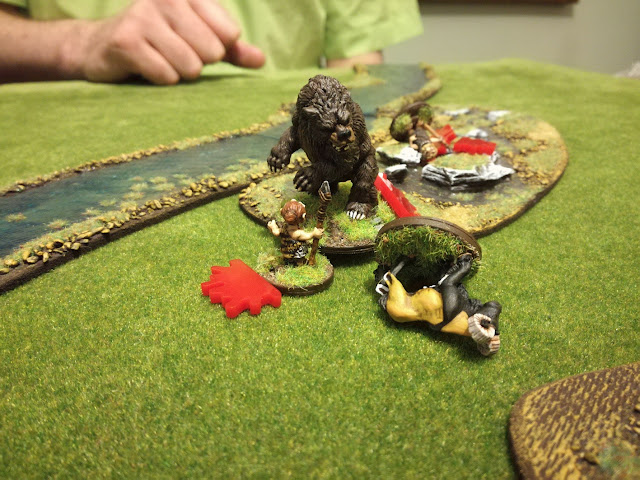 Ogg, thinking that his shamanic personality would somehow help him against a bear, approached the beast. He stabbed at the predator and, once more, the bear attacked back, causing - you should already now the answer - a nasty wound. 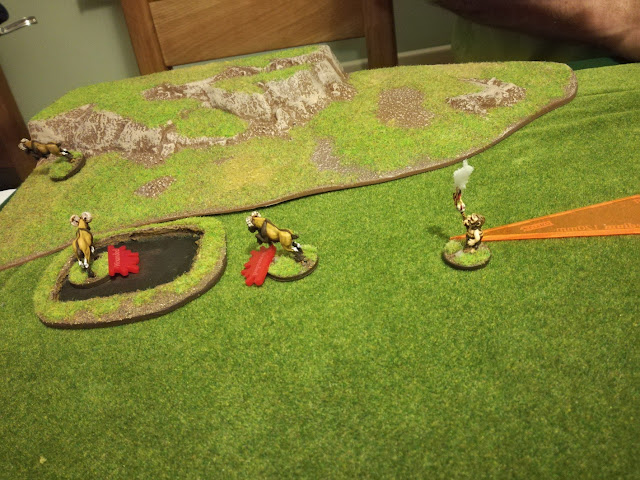 Meanwhile (again), Fergg had managed to get behind the last two sheep/goats. He ambled up to them and, waving his fire, chased one of them into the pit, scoring his second kill for the game. The last sheep/goat fled off the table. 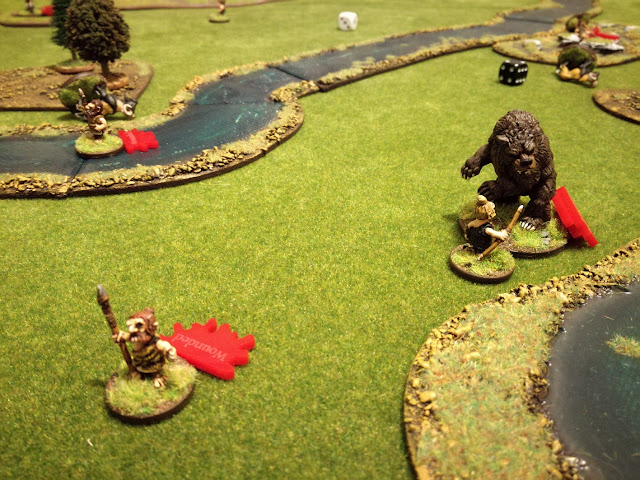 Bow, not wanting to be showed up by Fergg, shot at the cave bear, scoring a hit, but was then charged for his troubles. Happily for the archer, he escaped having his guts torn out. 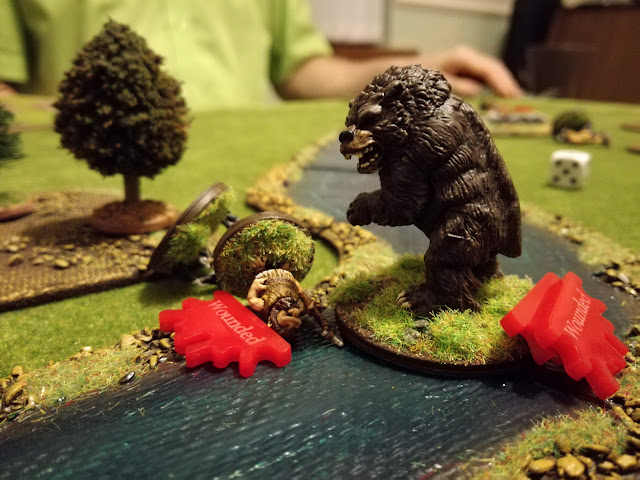 Urgg tried to match Bow's skills, missed the predator and was forthwith predated. The bear had now killed two hunters and wounded a third. 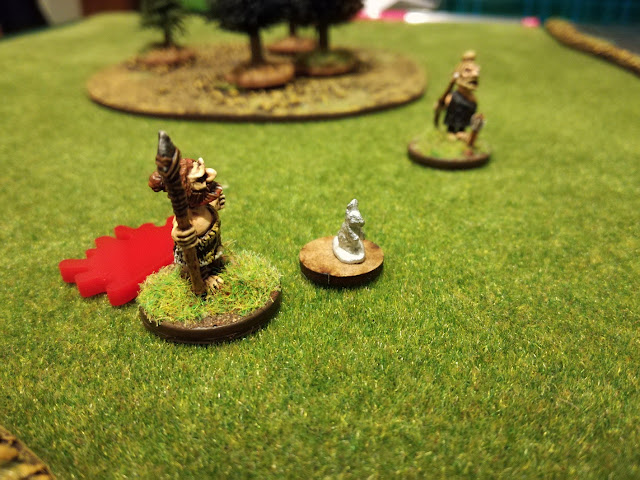 At this juncture, the first critter of the game was flushed out of hiding by Bow. Ogg, well placed, was able to knock it on the head and claim his first kill - not that it put him in the running for chief at this point though. 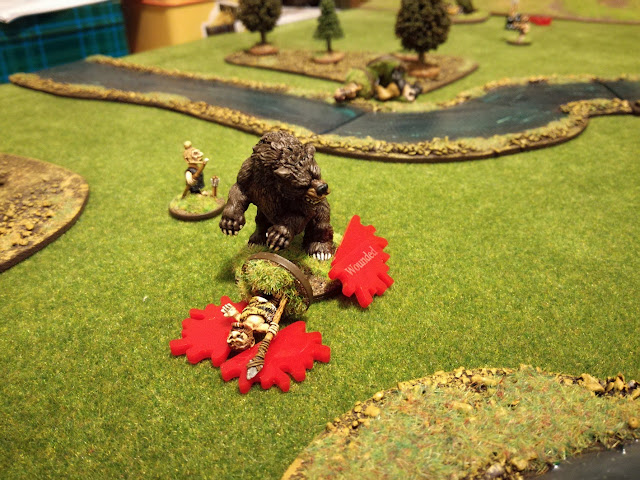 As the eighth turn came around, Ogg started a desperate action to seize the chieftainship by bringing down the bear. It didn't work. The bear ran him down and pulled him apart - proving, once and for all, that if you disturb a bear in the woods, you should respect its privacy.

So at the end of the hunt, Fergg came out as the chosen chief having netted two sheep/goats to Bow's one. Nobody managed to kill the cave bear and, lets face it, with only two hunters left in the tribe, the people are going to face a grim future.