I knew that I wanted to build a nymphaion, a public fountain house, for my Antiochene suburb but I didn't know exactly how I was going to represent it. Then I found a great little article by Rick Bonnie and Julian Richard (2012) discussing two first century BC/AD nymphaiai from Magdala on the Sea of Galilee (Israel), birth place of Mary Magdalene, and Sagalassos in Pisidia (Turkey). The pictures below have been lifted from their article without permission; I hold no copyright over them.


Both nymphaiai were built to resemble a pi-shaped stoa, the standard civic space/shopping mall of the ancient Greek world. Seeing the style of them, the date, the geographic spread (the the south and to the northwest of Antioch respectively), I figured that they might just be the template I was looking for. Conveniently, they both also fit within a 10x10 metre footprint which converts perfectly into my programme of 10x10cm buildings.

Sitting down with a pen, ruler, hobby knife, a bucket of glue and assorted balsa wood pieces this weekend, I managed to make my own miniature hommage of a fountain house - slightly closer to the Magdala example than Sagalassos and slightly larger than both. Still, not a bad effort for my first public building. The nymph statue is a Xyston Seleukid priestess from the Seleukos I personality pack. 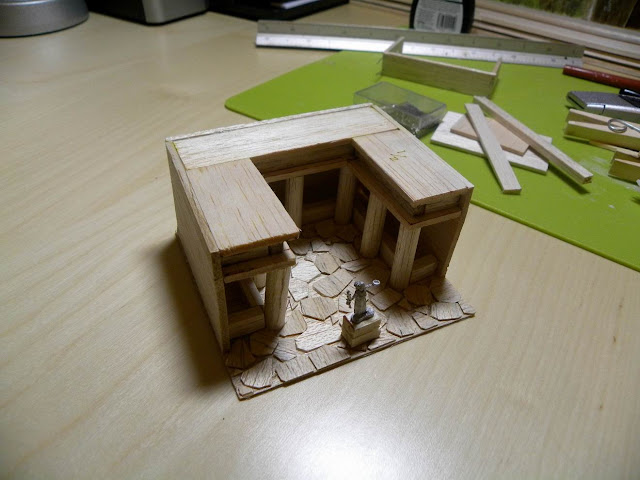