This evening will see my first introductory game of Hail Caesar. While I don't have enough painted units to create a viable army of my own at the moment, Brett will be providing an abundance of scurvy Republican Romans to serve as both sides in an ahistorical late third century BC Roman civil war (ah, yes, Roman civil wars; where there are no real winners except for the rest of the ancient world). My borrowed Roman force will have an allied Seleukid flank so I can field some of my own lads.

With that to look forward to, I thought I would provide another update to this little side project. So, without further ado, allow me to introduce Antiochos son of Seleukos, the Great King - better know these days as Antiochos the Great or more simply, Antiochos III. 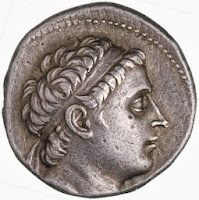 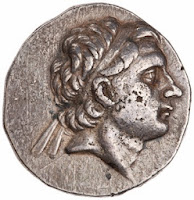 Born around 243 BC, Antiochos was the second son of the Seleukid king, Seleukos II Kallinikos. He was serving as viceroy in the East, probably based out of Seleukeia on the Tigris, when his brother, the king Seleukos III, fell victim to assassins whilst trying to force the Pergamenes to relinquish former Seleukid territories in Anatolia (223 BC). At the age of 20 Antiochos therefore found himself the ruler of an empire in decline. Once spreading from the Balkans to Central Asia, the Seleukid kingdom on Antiochos III's accession had lost its European possessions to Macedonia, the Thracians and Ptolemaic Egypt, Anatolia mostly to the Pergamenes, northern Iran to the emergent Parthians and Baktriana to a succession of rebellious Greco-Macedonian dynasts.

The maps below provide a general idea of the location of many of these places although the second one dates to the middle of Antiochos' reign when all things Seleukid were on the up. 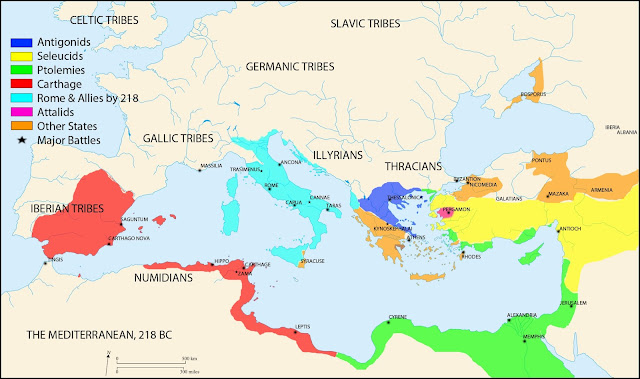 Through a series of dramatic and brilliant diplomatic and military actions (interspersed with a few upsets - Raphia, I an looking in your direction), Antiochos managed to claw back his full Seleukid inheritance over the next 30 years and even added a few new appendages such as Armenia, much of the Arabian side of the Persian Gulf, Palestine, and a far greater chunk of Anatolia and Thrace than had previously paid homage to a Seleukid king.

In 192 BC, he accepted an invitation from the Aitolian League to cross the Aegean and occupy central Greece. At that point his luck began to turn, crunched into the ground by the hob-nailed boots of Rome's legions. Concerned by his activity in Europe, Rome forced Antiochos first out of Greece and then out of most of Anatolia, establishing the Taurus mountains as the new north western frontier of the Seleukid empire with the Peace of Apameia (188 BC). Faced with massive war indemnities, Antiochos turned once more to the East in an attempt to find a bit of spare cash and was killed while trying to extract money from a temple in Elymais, western Iran in 187 BC.

Antiochos III reigned longer than any other Seleukid king and was rightly considered the second founder of the empire. Although his last years were far from glorious, he left the empire in a far more stable and enlarged state than the way he found it, and produced a whole gaggle of children, most of whom would either reign later in their own right, or marry into other dynasties and became the parents and ancestors of future kings and queens.

Giving your commander a white horse may be a little clichéd, but I suspect that many generals throughout history may have chosen a grey for just that reason. It makes them stand out and look 'commanding'. Here, Antiochos wears the latest in silvered iron Attic helmets with twin feathers and horse hair central plume, along with re-enforced linen armour, doe-skin boots and a dapper purple long sleeved chiton and cloak. His aide wears a bronze cuirass and Boiotian helmet while his personal standard bearer wears the standard armour of the companion cavalry and carries a purple ensign emblazoned with the Seleukid anchor motif. All figures are from Baccus - Antiochos and aide from the Greek and Macedonian generals pack, the standard is from the Seleukid agema pack. 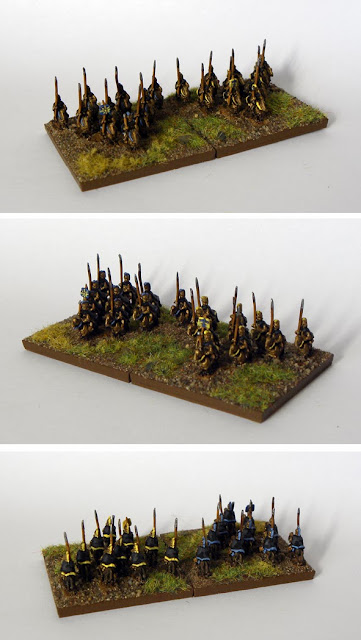 Two elite Seleukid cavalry units, each 1,000 strong, appear to have served alternatively or together as the king's bodyguard. The Royal Companion cavalry, drawn from the best horsemen of Greco-Macedonian descent in the kingdom, and the Agema cavalry, drawn from the best Iranian horsemen in the kingdom. After the loss of Media in the 140s BC, the Agema seem to have been recruited from the city of Larissa in Syria, a colony settled by Thessalians a century and a half before. I plan on fielding the two squadrons as a single standard sized 'unit' in HC game terms but I suppose they might both serve as individual small units. All models are from the Seleukid Agema pack from Baccus - the chaps with blue trim are my companions with a Macedonian sun burst ensign, the yellow chaps are the agema with a Seleukid anchor ensign.. 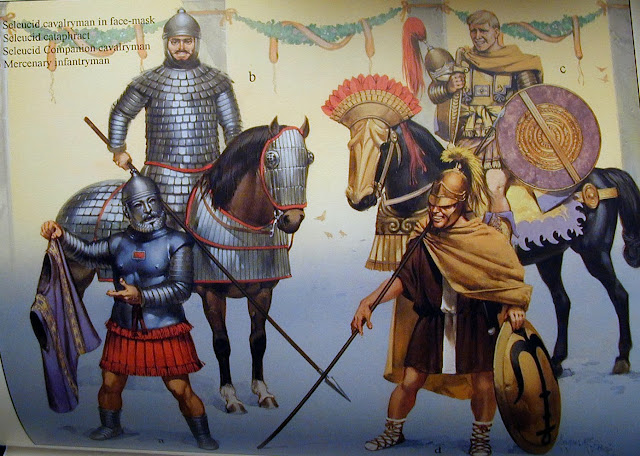 This wonderful Angus McBride painting (used here without permission) shows his interpretation of the Companions (C). I'm not sure about the shield personally, but a great image none-the-less. Antiochos led an anabasis - a march up-country - to reclaim the eastern satrapies occupied by the Parthians and Greco-Baktrians in the last decade of the third century BC. In the process, he seems to have adopted the Parthian practice of super-heavy cavalry and transformed part, or most, of his cavalry into cataphracts (A? and B in the image). I might do the same at a later date, but for now, my army is intended to be from the pre-reform period. 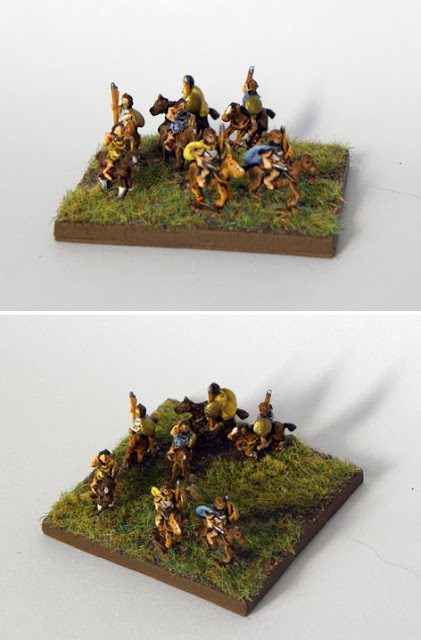 To support my heavy cavalry, I have painted up some Tarantines. The horsemen of Taras in south eastern Italy are thought to have been the first Greek riders to use shields. It was Pyrrhos' employment of them in the early third century which led to a more general Hellenistic use of shielded cavalry. Throughout the period, armies of all kingdoms employed 'Tarantines', elite shielded horsemen armed with javelins. However, it is often unclear whether the Tarantines were always mercenaries from Taras, or whether the term may have become pseudo-ethnic, denoting the mode of warfare rather than the ethnicity of the warriors. The Baccus Tarantines have ridiculously large shields (like a Greek hoplon), so I have painted up Baccus Numidian horse instead. Ah, the glory of 6mm. 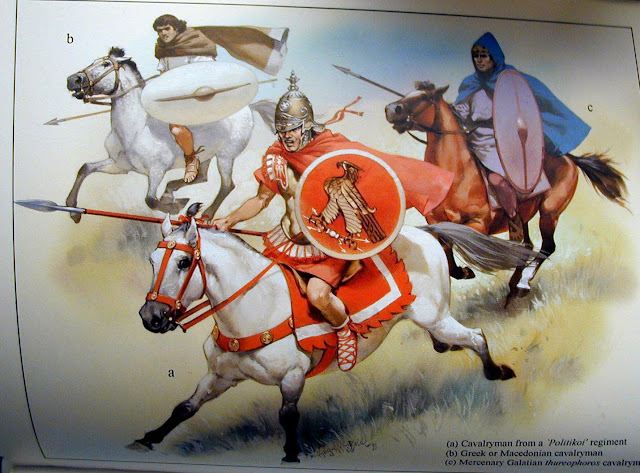 Another McBride, although it doesn't show Tarantines, its still a great painting... 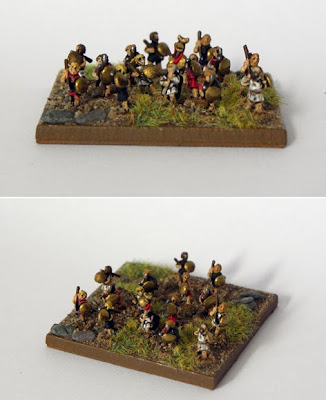 On foot, I have the fierce Kilikian highlanders (more Baccus Numidians). These light infantry were famed in antiquity and represent one of the two main exports of Kilikia - the other being timber for ship building. Descended from indigenous populations that had held much of the Taurus mountains since the Bronze Age, Kilikians were much sought after as mercenaries by all the eastern Hellenistic states. 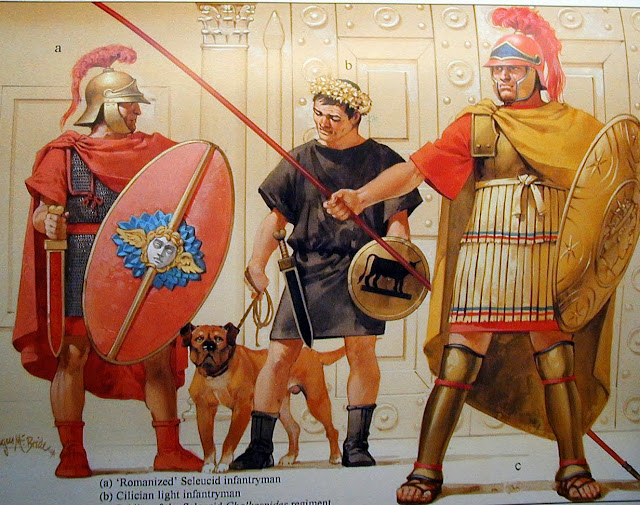 A third McBride, the central figure (C) represents my boys from the hills. I like his broze faced pelta (buckler), but there was no way I was going to paint 15 tiny little bulls on my figures' shields.

Finally, a shot of my 6mm figures as they stand currently. The elephants and archers have been covered in earlier posts. I have another six units to go (including one pike phalanx) before the initial army is complete and game legal.