The second of the weekend's games of L'Art de a Guerre saw my Yorkists go head to head with Brett's Lancastrians in a 200 point War of the Roses arrow-fest. I am afraid that my camera work was even poorer than usual on the night, but it gets to int across I hope, even if it does not justify the paintwork. 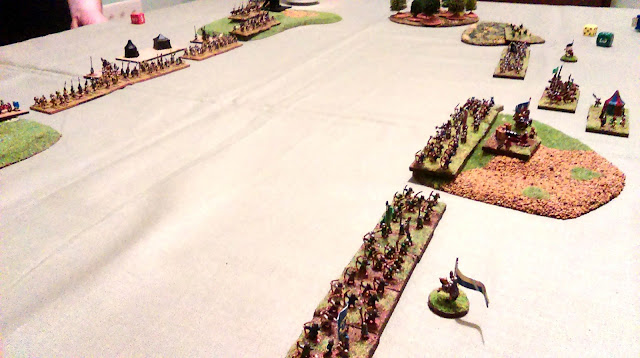 My Yorkists were defending this time against a Lancs assault. My left ward was composed of two groups, consisting of militia longbowmen on the far left and then retinue bow supported by retinue bill. My centre ward had elite foot knights supported by retinue bowmen, and both heavy and light artillery and two units of currour heavy cavalry. On my right were more foot knights and retinue bowmen supported by some handgunners. My lord-commander commanded the centre and both sub lords were unreliable (something I insist on doing with my WotR and Anglo-Irish armies to reflect the skulduggery).

I'm not exactly sure of the make up of the Lancastrians, but they must have had a shortage of powder as all they could manage was a single light artillery piece. They did, however, out horse me quite significantly to begin with until some of their knights dismounted during deployment. 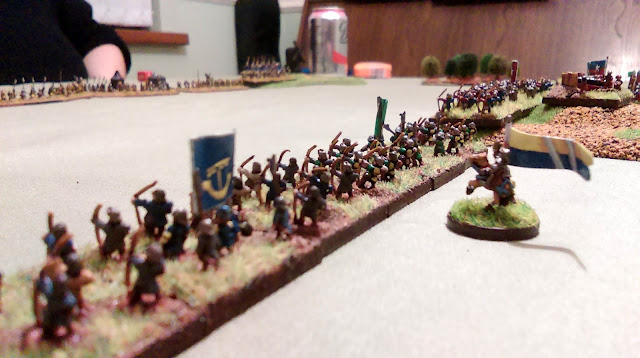 Milord Yellowonblue with his militia archers and retinue. 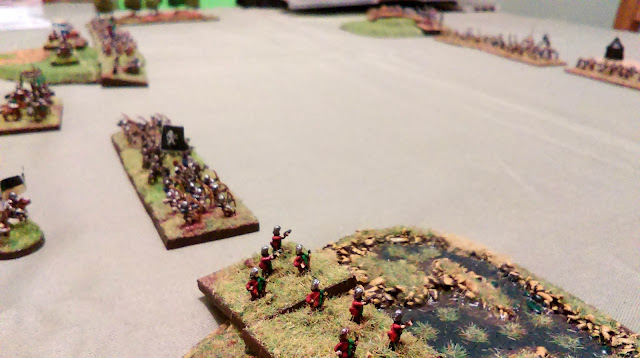 Milord Blackonyellow with his retinue and handgunners. 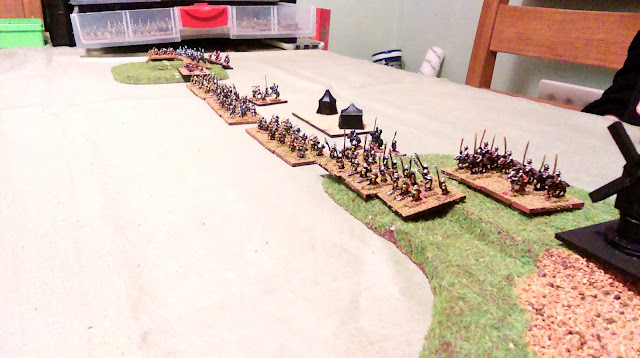 The Lancastrian lines. Their strongest ward was on their right, opposite my weak left flank. Their weakest ward was their left, composed mostly of mediocre militia units. 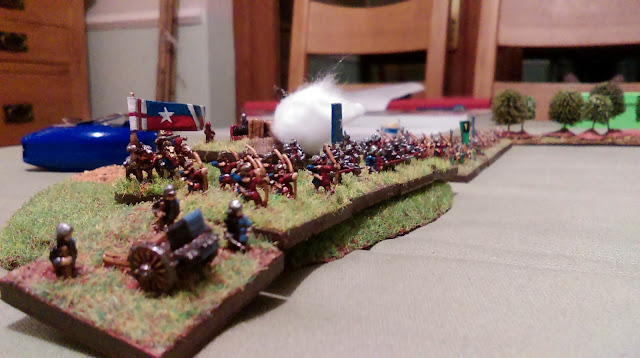 The game opened with the boom of my heavy artillery on the top of the hill at my centre. She kept up fire throughout the game with variable success. 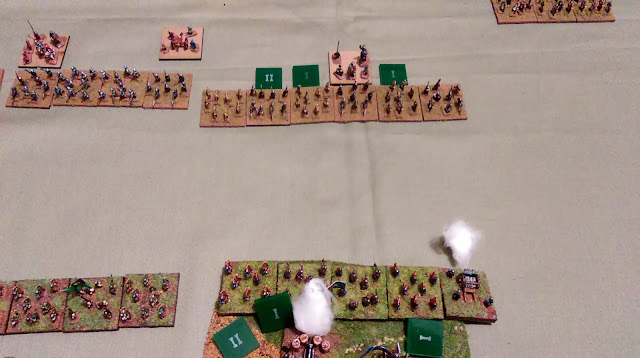 As the dice would have it, my right ward proved to be unreliable and refused to follow the plan, allowing Brett to hold back his weak flank and push forward with the rest of his army. The two centre wards got involved in a pretty bloody shoot out. 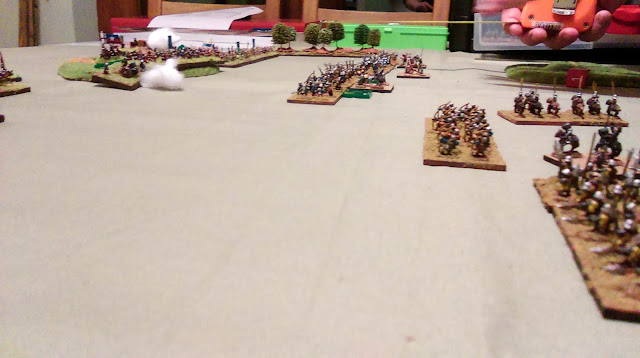 Here you can see the wide birth being given to my unreliable ward by Brett's northern militias. His border prickers are heading off to see how they can help with the battle raging in the distance. 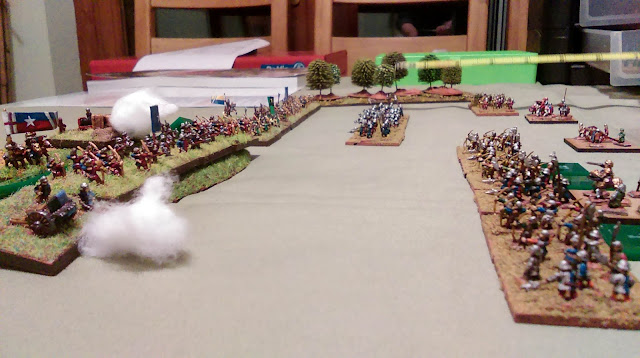 In the centre, it looked like I was taking the lead at the beginning, but then my luck turned and I soon saw my retinue archers routing, leaving my foot knights to go it alone. 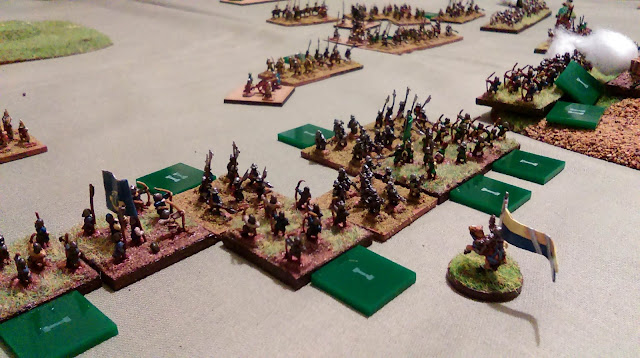 On my left, the Lancastrian commander led his retinue straight into (and through) my militia and retinue. My flank crumbling before his combination of elite long bow and foot knights. 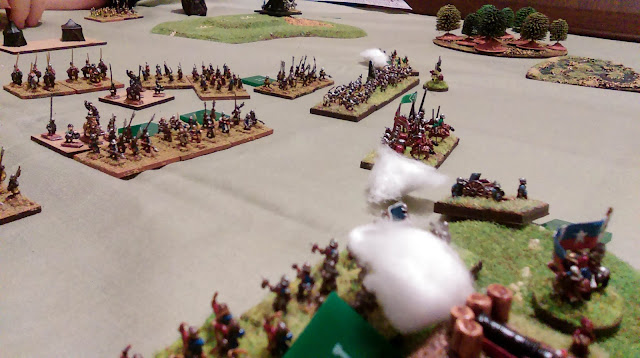 Finally, Milord Blueonred reminded Milord Blackonyellow that an ancestor had once saved the other's ancestors life (or somesuch) and my right ward sprung into action at last, heading straight forward to disperse the northern militias. 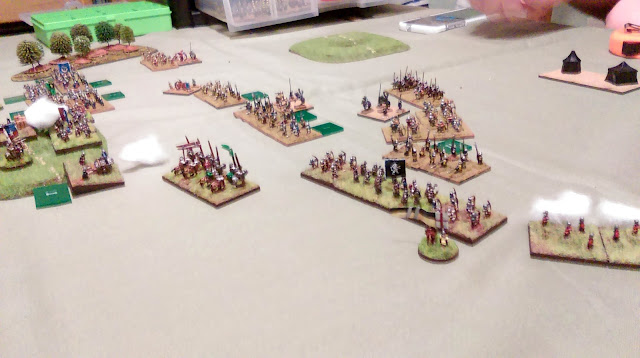 As my left dissolves, my right tears holes into their foemen, the guns of the handgunners roaring to life. 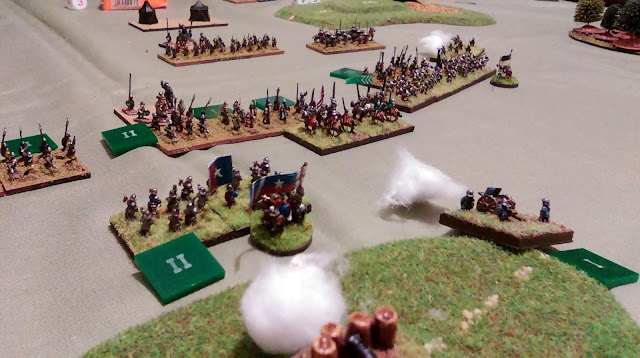 ... but the damage of the initial hesitancy on the right was already done. Milord Blueonred joined with his retinue of foot knights and marched slowly into the hail of arrows. It was that or stand and be shot while the Lancastrian right rolled up my left flank. 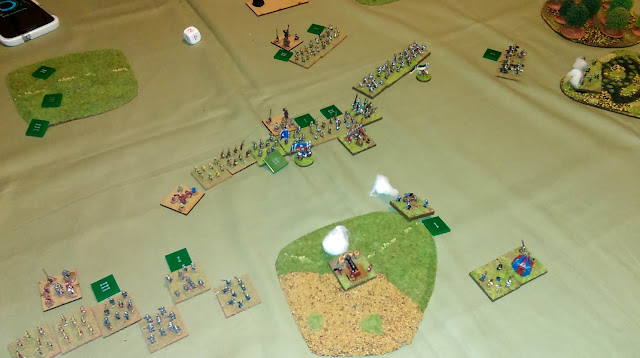 All the while, the Lancs. border horse had turned around and were circling round my right flank, chasing the handgunners back into a marshland, all the time recieving their fire with grim resolve. 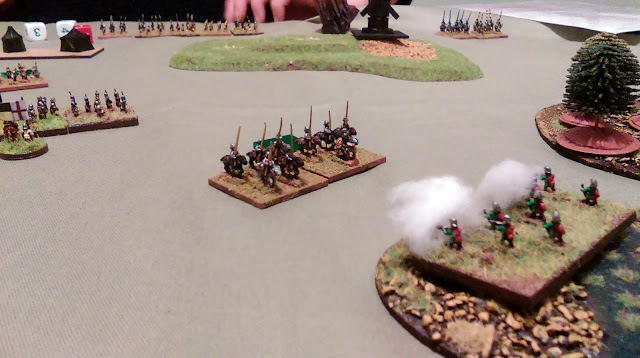 Now I thought, if you want them you donkey-wallopers, you come into the marsh and take them. 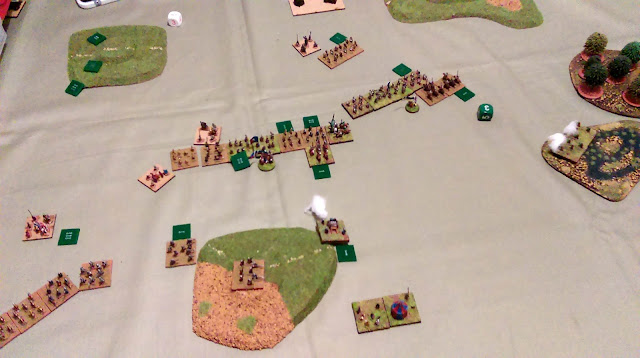 Unfortunately, it turns out that the northern horse didn't really want my handgunners at all. They did an about face and charged straight into the rear of my victorious right flank retinue, easily winning the melee. Back in the centre, the Lancastrian right had made it to the top of the hill in my centre, capturing my guns and threatening both my camp and the rear of the few foot knights I had left still fighting. This brought me now to breaking point. I'm sorry to say, the Lancastrians were still far from their own.

It was fascinating playing two such similar armies against each other. Generally we play with wildly different armies but here of course were were themed very much around foot knights and longbowmen. The War of the Roses army list in ADG is nicely nuanced though, and we were still able to have distinctive forces, for all the core was the same.

A highly enjoyable game, but a bad start for the House of York. Next time Lancaster. Next time.