I enjoyed a couple of very enjoyable games of L'Art de la Guerre over the weekend. The first was a small 100 point warm up match helping us to remember the rules. I ran Early Arabs, an army that I've never tried before and which was completely out of my comfort zone. Every unit in my army could shoot, and the only units which couldn't evade were two units of LMI bowmen. 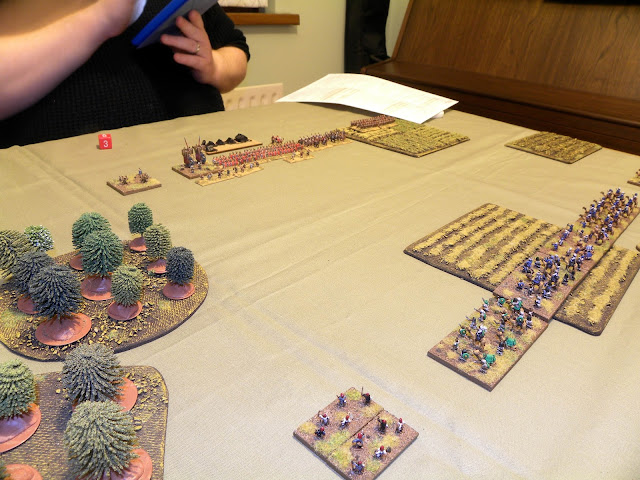 We diced properly for attacker/defender etc and it turned out that I was the attacker, raiding into the plains east of Antioch no doubt. The photo above shows the starting setup. I had two skirmishing LI units on the left, then a group of four javelineers and the bowmen. Beyond them, three camelry units with bows and on the far right, three light cavalry units with javelins.

My foeman, Brettius, also took a new army running Romans from the triumviral period. His eyes shone whith discomfort and excitement in equal measure as he deployed two units of thureophoroi/medium spear on his right (opposite my light horse), then two units of Gallic medium cavalry, three legionary units/heavy swordsmen, an elephant and some light artillery. 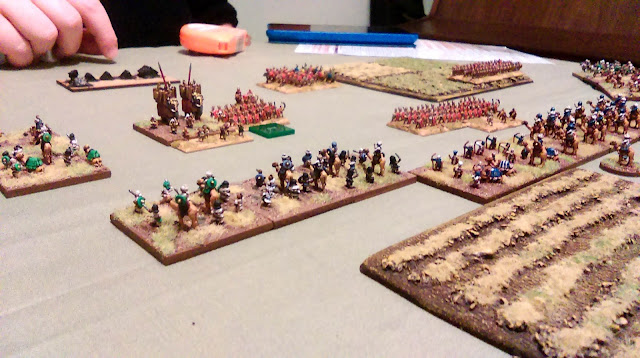 In the opening rounds, I pushed forward on both flanks, my light Bedouin light cavalry peppering the thureophoroi with javelins, usually hitting their shields rather than bodies unfortunately. Off camera to the left, my Arab skirmishers were quickly making their way through a plantation to take the Roman artillery on the flank, 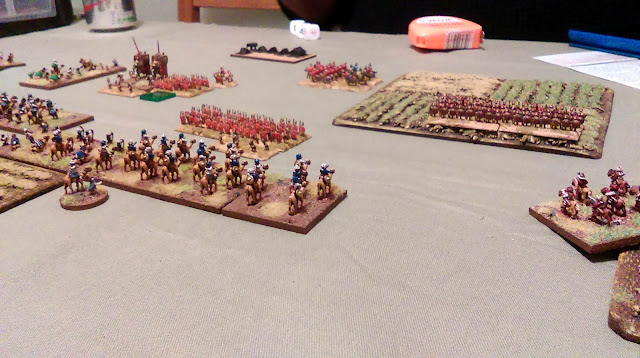 My centre was only slightly slower than my flanks, moving forward to star firing arrows into the dreaded legions of Rome. Slowly, the Romans started the lose cohesion, and it looked like the Arab shooting would bring me a swift victory. In the background, the Gallic horse rode backwards and forwards trying to decide the best course of action. 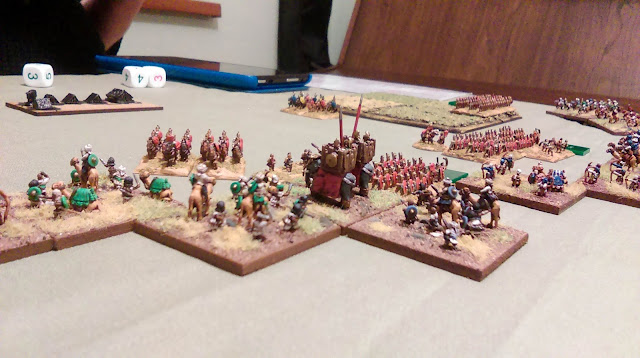 Having easily removed the Roman artillery, my javelineers and skirmishers turned their attention to the elephant. It was important for me to destroy the mighty beasts as quickly as possible as the Roman heavy foot had made contact with my soft and delicate centre and the Gallic horse were starting to bear down on me. In the shot above you can see the elephant has just been routed. We have turned the base around, but not yet rolled for the rampage. As it turned out, the damned things rampaged back over my troops causing a cohesion loss. 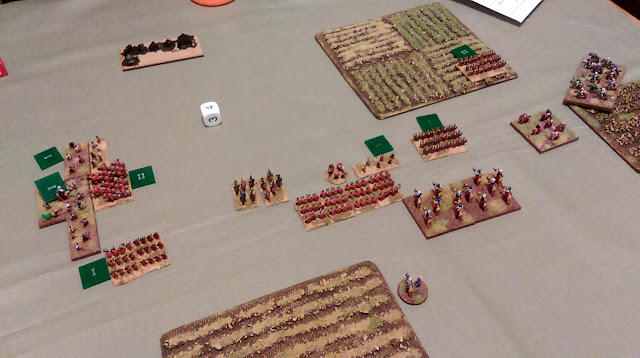 From the highs of my early lead and having taken care of the artillery and elephant, my fortunes plummeted. The heavy swordsmen of the legions love nothing more than LMI infantry and that was all I had to face them. Some timely rallying on Brettius' part also stopped him losing his thureophoroi, and that more or less lost me the game.

By the time we stopped rolling the dice, he was one point away from breaking, and I was spot on the money, breaking off and fleeing without having reached my target of Antioch. An enjoyable and close game using new troop types for both of us. I have LMI javelineers in most of my armies, but have yet to learn how to use them. What I do know is that they will not stand too long when faced by heavy swordsmen.