As playtesting for Galleys & Galleons: Fayre Winds & Foul Tides (for that be what we be calling it now...) enters its final phase, I thought I would post a nice little update on the status of my various fleets. 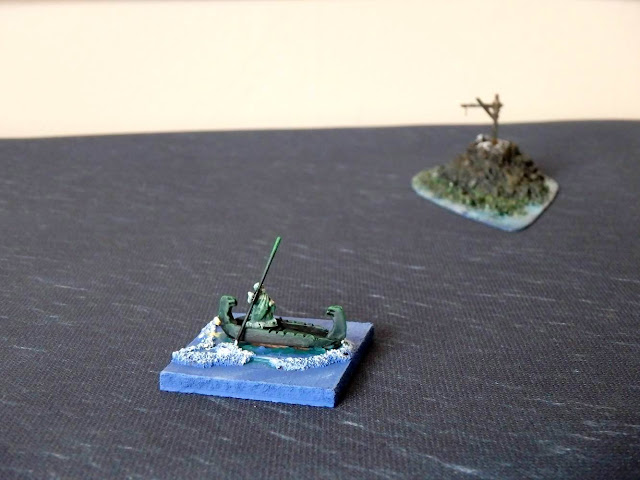 To begin with, here is Charon, Ferryman of the Dead. Charon himself is a Baccus 6mm ancient civilian, in a scratch built boat (my thanks again to JB for the scratch building). Charon counts as Magical in the game, with an obvious choice of Necromancy for his school of magic. 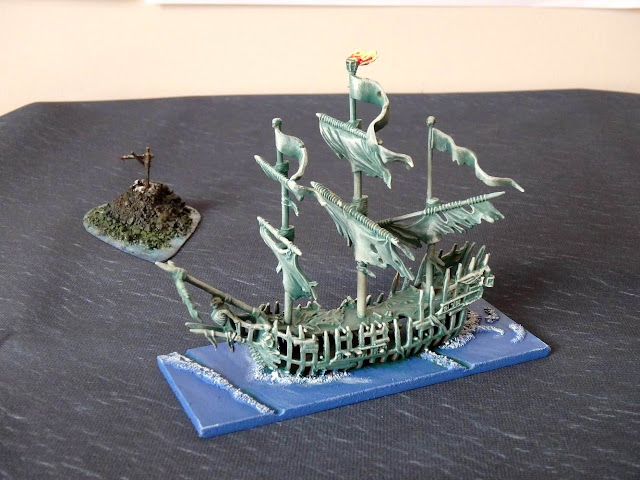 Next up is the spectral ghost ship, Bluebeard's Revenge. Spectral models are harder to hit with gunnery than their more corporeal counterparts. The model is from GW's Dreadfleet with the hull cut away to the waterline. Loath as I am to admit it, it is a splendid little model. 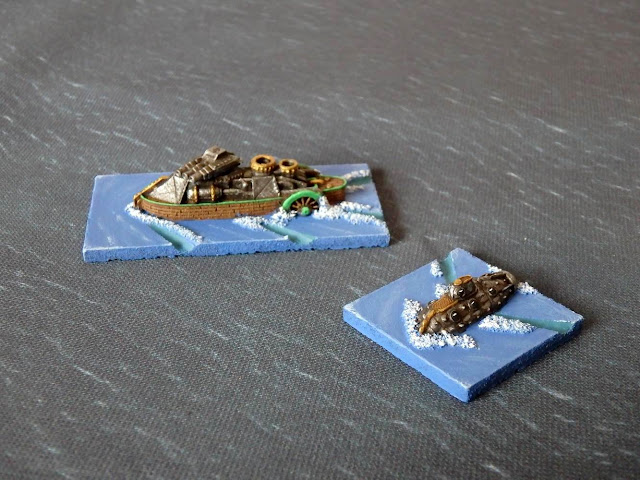 Steaming into a lacepulp dystopia, we have the Crocodile and the Damp Doxy. The Crocodile is a monitor, a steam-driven ironclad. Actions are spent to change the speed of the vessel, but once set, it just plows right on. The iron cladding helps to deflect enemy gunnery. The model is from Spartan Game's discontinued Uncharted Seas - a big thank you to Dan for sending that one through to me. I have added the paddle wheels, nicked from a spare 6mm chariot.

The Damp Doxy is based on a real 17th submarine prototype that was first tested in the Thames in 1620. My one isn't quite as fragile as the original and comes from RPE's Empires line of fantasy fleets. I think it is sold as a dwarf submarine. 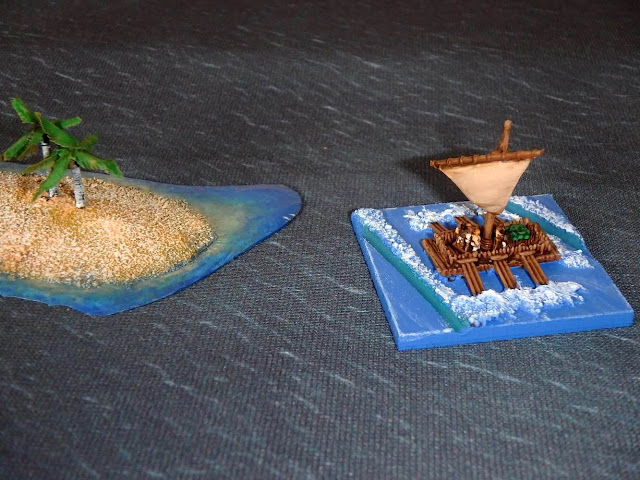 Proven to be more of a hindrance than a help so far, the Phoenix is an orcish raft from RPE's Empires range with Perter Pig crew added to scale it up to 1/450. I might start experiment with it as a fire ship... 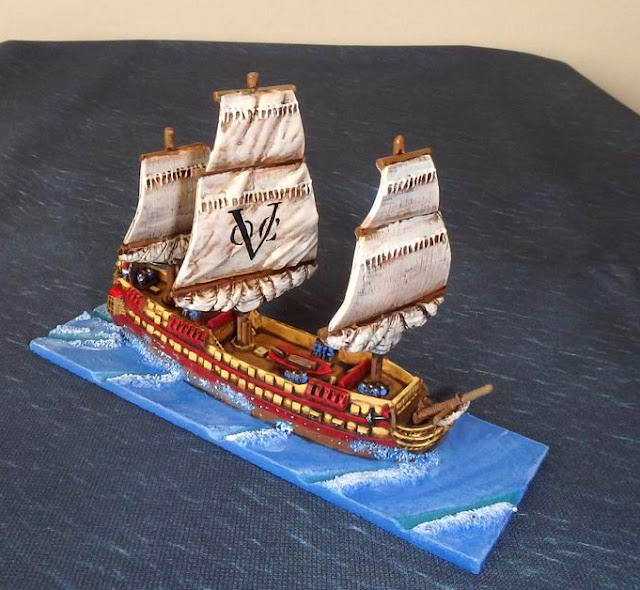 Taking charge of any situation, this second East Indiaman for my Dutchmen will act as the flagship of my engalarged VOC fleet. She is a large merchantman from Peter Pig.

The Nutmeg is the third and (perhaps) last junk in my VOC fleet. Significantly larger than the others, she is a full sized merchant vessel. The model is an Uncharted Seas Ralgard cruser with the foremast raked forward and a third mast popped onto the stern as a mizzen. My thanks again to Dan for sending it on to me. Once again, Peter Pig crew have been co-opted onto the decks. 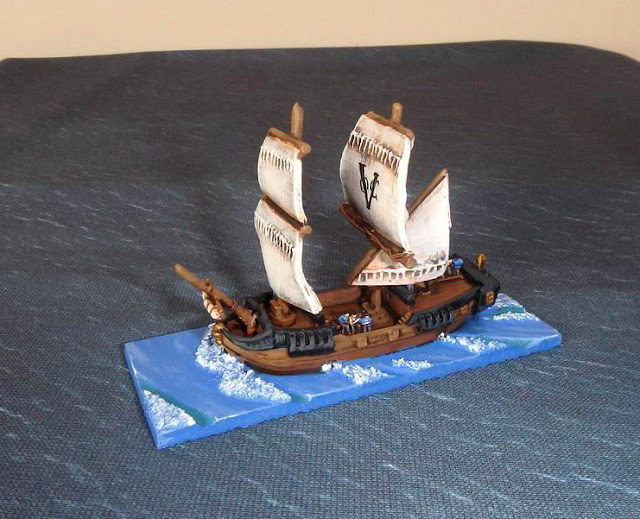 A second VOC cromster, the Utrecht is a Peter Pig medium warship. 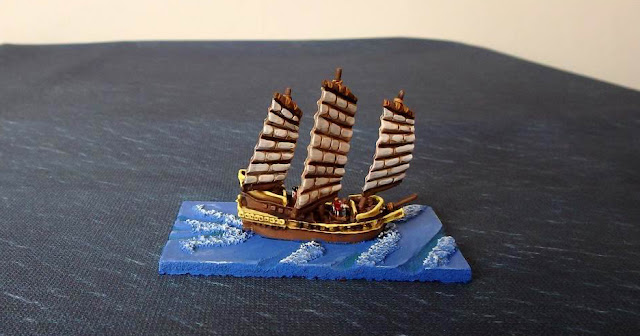 A while back I posted about my intention to build a lorcha. Well here she is. The Lotus is a pirate lorcha and will usually sail with my pirate brethren. Combining a European hull with eastern sail design, the hull is from the largest human vessel from RPE's Empires range, with sails from a Grumpy 6mm junks and, believe it or not, deck crew from Peter Pig. 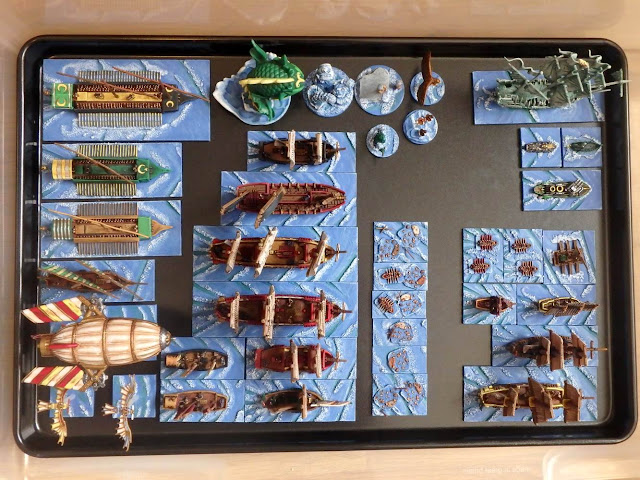 With this sort of selection you would think I'd have enough models to cover any sort of scenario - I'm sure that's exactly what my wife thinks. It will certainly do rightly. For now.