Crupellarius and cestus - final gladiators (at least in 15mm) 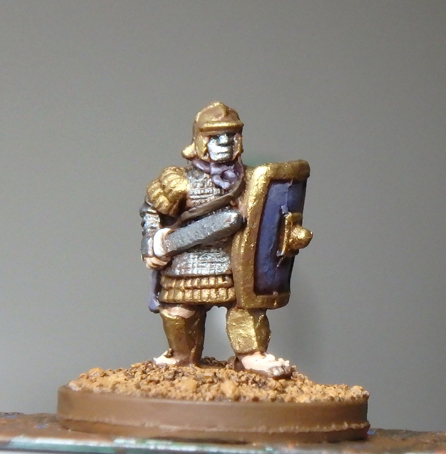 Here, I present for the crowd's approval, the cruppelarius - the fully armoured bucket-headed gladiator known to us from only a very few pieces of ancient evidence including a single written account in Tacitus relating to a rebellion in Gaul against Rome in AD 21.

"In addition were some slaves who were being trained for gladiators, clad after the national fashion in a complete covering of steel. They were called crupellarii, and though they were ill-adapted for inflicting wounds, they were impenetrable to them ... The men in mail were somewhat of an obstacle, as the iron plates did not yield to javelins or swords; but our men, snatching up hatchets and pickaxes, hacked at their bodies and their armour as if they were battering a wall. Some beat down the unwieldy mass with pikes and forked poles, and they were left lying on the ground, without an effort to rise, like dead men." 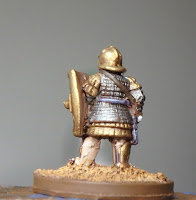 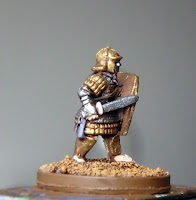 I have been at a loss for some time on how to represent an ironclad gladiator in 15mm and finally settled on this chap from Donnington. He is a Trajanic super-heavy legionary for the Dacian wars and wears manica and greaves, as protection against the Dacian falx. I painted the face silver to look like a full-faced helmet simmilar to Roman parade helmetsor the helmet of the curiously named Tigris the Gaul from the 2000 movie Gladiator. 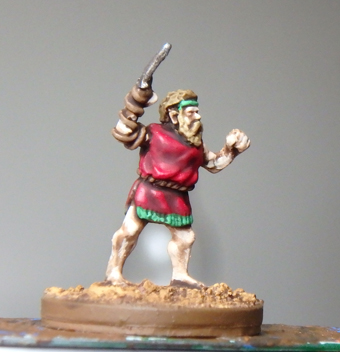 The cestus was a boxing gladiator who's arms were restricted to leather straps bound around their hands and forearms. Of course, being gladiators, they are sometimes shown with solid blocks, studs, spikes and even blades attached to the leather straps. This one is a Xyston Jewish zealot with the dagger removed from the left hand and a ridiculously large blade attached to the leather thong tied around his right fist. In retrospect the blade is probably too big... probably. 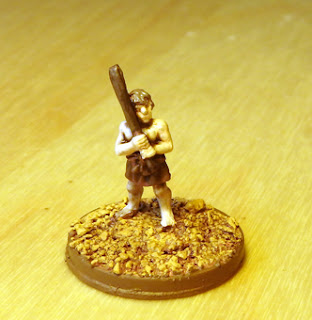 And for good measure, here is another street rat for Antiocheia Mikros.

Email ThisBlogThis!Share to TwitterShare to FacebookShare to Pinterest
Labels: Blood Sweat and Cheers, Hellenistic, Song of Shadows and Dust