And so, quietly, step by step, I am drawn back into the mists of time, where the few peoples of the earth struggled to survive in a hostile environment, and when one bad dice roll could ruin your day. As Palaeo Diet: Eat or be Eaten (PDEE) takes shape, so has my collection of prehistoric beasties. My current collection featured in the last playtesting post, although much of it was then only partially painted.

So lets take a look at what I've put together. My hunters and mammoths are the original 20mm range from Flytrap Factory. I can't praise these models enough, although I was disappointed that their new prehistoric range, brought out as a Kickstarter last year, is scaled up to 28mm. 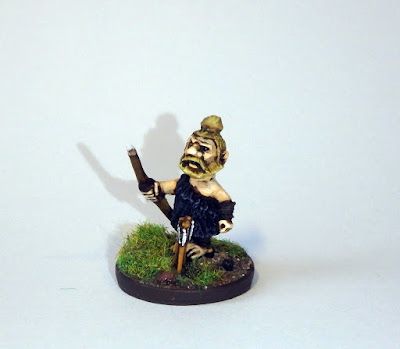 However, with the exception of one Flytrap cavie with a club, all the other 20mm hunters carry spears. PDEE will differentiate spear, club and bow class weapons, as well as fire carriers. I have previously converted a spearman to carry a flaming torch, but I have also carried out a quick weapon switcheroo on this chap, so I now have a bowman as well. The camera angle hides the curve of the bow, but it is there...

The flaw in my plan of using these little fellows for my games is that most prehistoric animals available are scaled to 15mm or 28mm, and these guys have a definite exaggerated look. So, the beasties below were the best approximations I could find to fit with both the scale, and the cartoonery (... that is a real word now ...). Our humble archer is in each shot for scale. 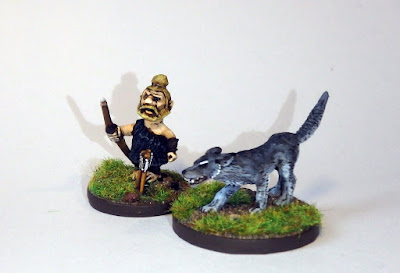 My herd of ibex (ibexes? ibiquoi? ... I'm pretty sure it's like sheep and fish ... ibex can be singular or plural ... right?). Anyway, my ibex are significantly over-sized and very buff. It must be a result of drinking all that primordial soup. The figures are from Crocodile Games' Wargods of Aegyptus range, where they are intended to be attack rams of Khnum I think. I got them because of the exaggerated features and hoped they would be slightly shorter than they are. Never the less, they do the trick nicely as herd grazers. 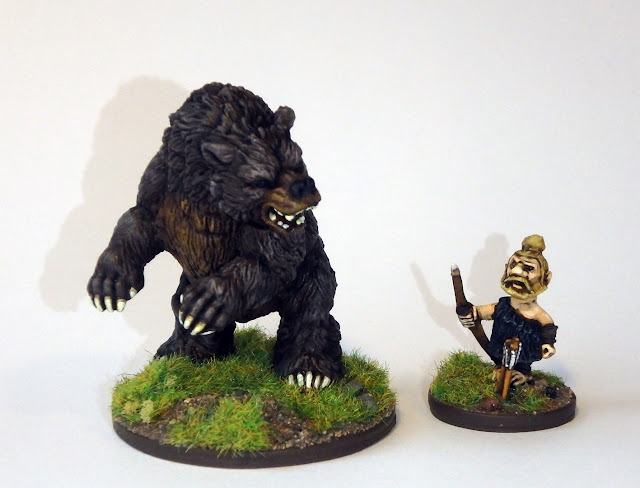 This chap (or lady, I don't know, I respect its privacy) is a cave bear from D&D's old pre-painted plastic range. Re-based and repainted, s/he works perfectly both in terms of size and features, as a cave bear in PDEE. Cave bears are classed as 'great predators' in the game.As apex predators, they are the biggest nasties you are likely to meet. They are worried by little except fire, and lash out with fearsome savagery when confronted with hunters and other prey that come too close. They tend to be solitary figures and are best avoided if possible.

Now, I am just waiting on some pack predators and a club wielding hunter, and I will have representations of all of the key model types needed (at this stage).