The mauling of the Frog - Sharp Practice 2

This week, we returned to the semi-wild woodlands of 1750s eastern North America for my second game of Sharp Practice 2, the large scale skirmish game for the black powder period from Too Fat Lardies. The game saw a mixed force of French regulars, Canadian militia and allied Indians (Huron probably, but they never got close enough for me to ask) on the warpath. Their immediate target was a British homestead, part of the fragile network of settlements seeded across the woodlands to start the exploitation of civilising of the New World. 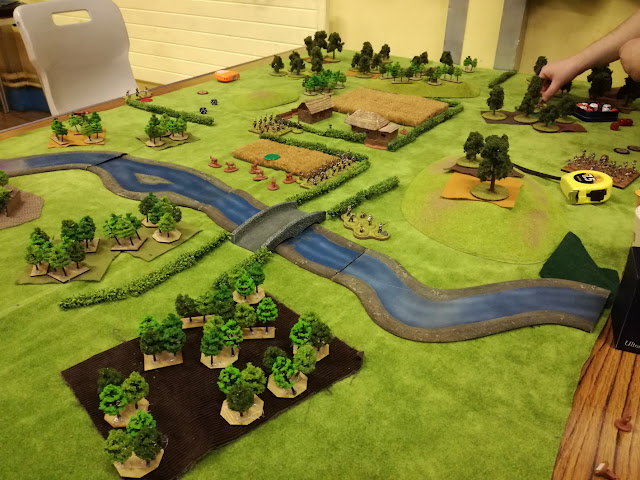 As the photo above shows (taken from the east, looking west), the roguish Captain Hotspur heard of the French threat and hot footed it towards the homestead from the south, leading a column of Inniskilling fusiliers with Indian scouts, while his bookish 2iC, Lt Fitzjames (of the Cherrymount Fitzjames') approached from the east with a second force the same size. 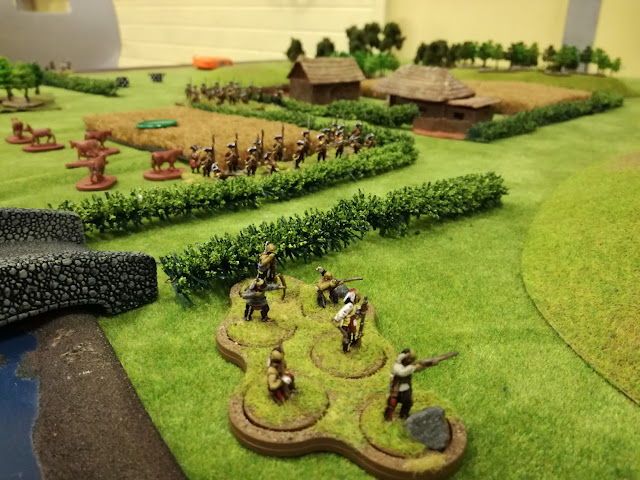 While the French regulars slowly approached the farmstead across the open ground, Hotspur marched his men up a lane between freshly planted hedgerows. Fitzjames' lads forded the river and took up a defensie position behind yet more hedgerows. 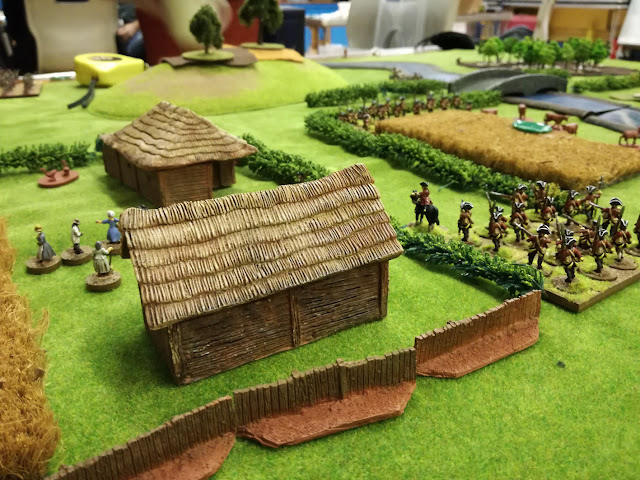 Hearing the sound of marching men, the colonials gathered together into a hastily formed militia within the walls of the farmstead itself. 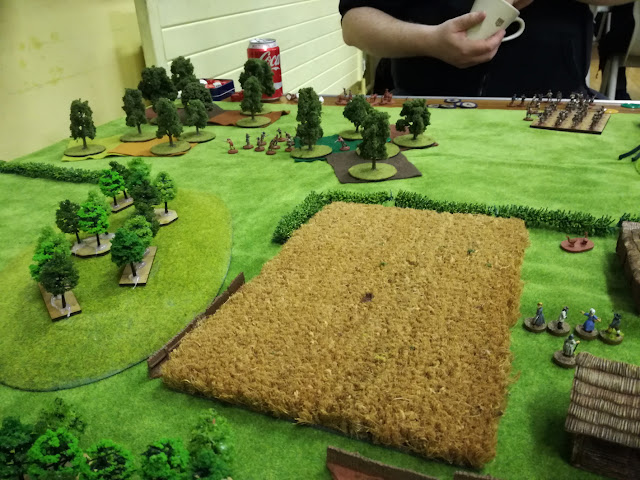 From the woods to the northwest of the farm, Canadians and the Indian allies leaped out of the trees, hooting and howling as they loped towards the fields of ripe grain. 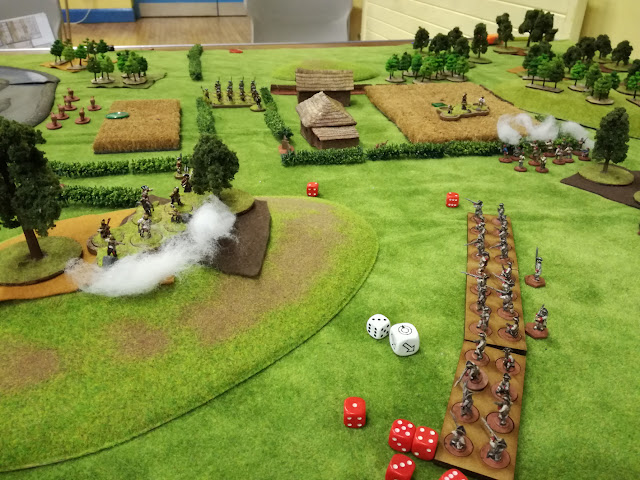 With the approach of the Canadians, the colonial militia ducked inside the blockhouse and proceeded to conduct sporadic and largely ineffective fire through the windows. Hotspur's Mohawk scout sprung up from the wheat fields, only to find themselves the easy target for the Canadians. To the east, Lt Fitzjames reformed his fusiliers into a firing line at the foot of the hill, while his own irregular scouts ran to the top of the wooded slopes and proceeded to fire down on the French column. The French regulars themselves formed into a line, facing up the hill. 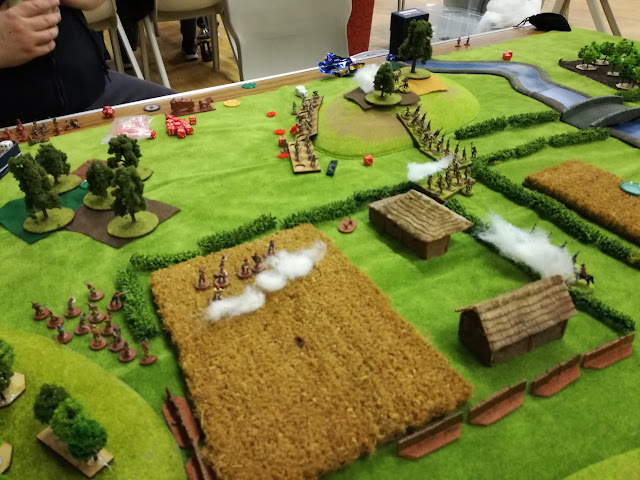 Captain Hotspur split his own column of troops, commanding a rear guard at the hedgeline by the block house, while sending the rest forward under Sgt Maguire to aid Fitzjames to the north. The Canadians ran howling into the Mohawk among the grain, tomahawks flying, and made short work of them. Meanwhile, French regulars advanced part way up the hill and presented their muskets in readiness to fire. 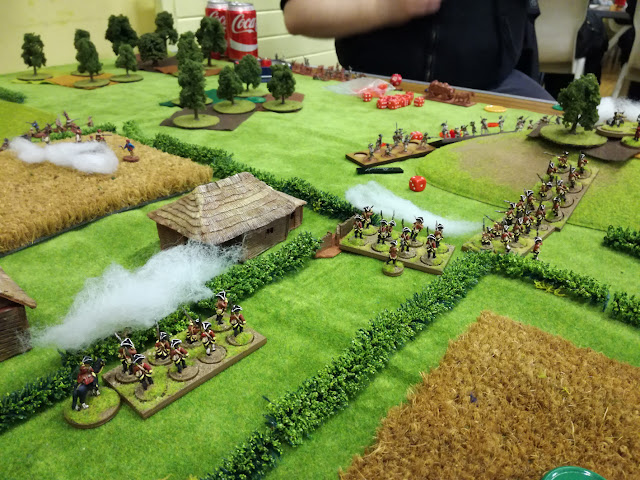 Under Lt Fitzjames and Sgts Maguire and Hamill, the Ulster regulars and Indian scouts were keeping up a steady rate of fire against the French Line, slowly whittling it down. 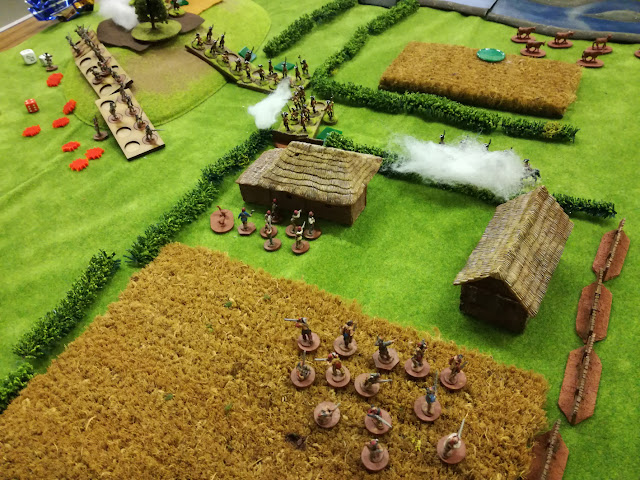 When the French did start to return fire, however, shock quickly began to accumulate on the Inniskillings. The Mohawk among the woods at the crest of the slope managed much better. Back at the farm, the remains of the Canadians approached the block house, but once there, the stress of the skirmish so far began to tell. The men were parched, and responded sluggishly to further orders. 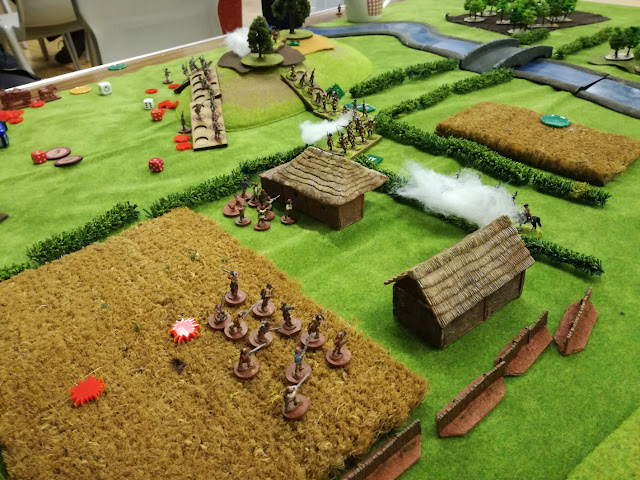 The French allied Indians tried to approach the barn to burn it down and gain some victory points, but some sharp practice from Hotspur and his rear guard inflicted so much shock on them that they became paralyzed and could no longer advance. 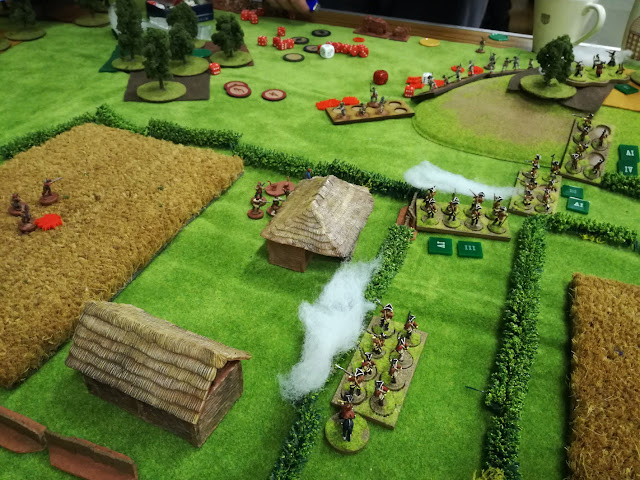 As the game finished up, both firing lines of regulars were feeling the weight of accrued casualties, with various groups starting to break formation and pull back. However, Hotspur's rear guard were still unharmed, and Fitzjames' Indian scouts were also almost fresh. With no realistic chance of driving the redcoats from the field and burning down the farm, the Frog conceded defeat and his forces withdrew.

It was a fun and brutal game with many casualties on both sides. It was also still very much a learning game, so took a while longer than perhaps it should have done as with both got used to the rules. All-in-all, Sharp Practice 2 is a great wee game that will certainly be a regular for us in the future I think. Although if I was smart, I would retire now after two victories. That way I could forever be undefeated!

For the fun of it, below are some close ups taken on the night of my brave, brave, boys and my settlers. All figures are Blue Moon. 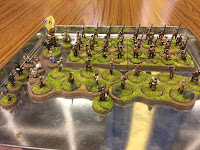 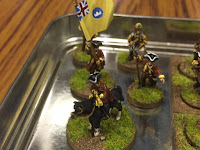 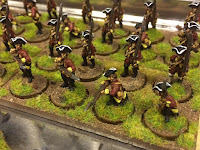 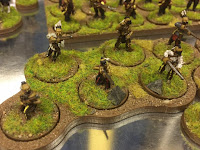 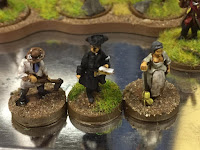 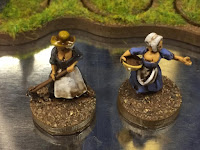