Rounding off Mark's recent bout of Palaeo Diet adventures, allow me to introduce the Schadenfreuds: 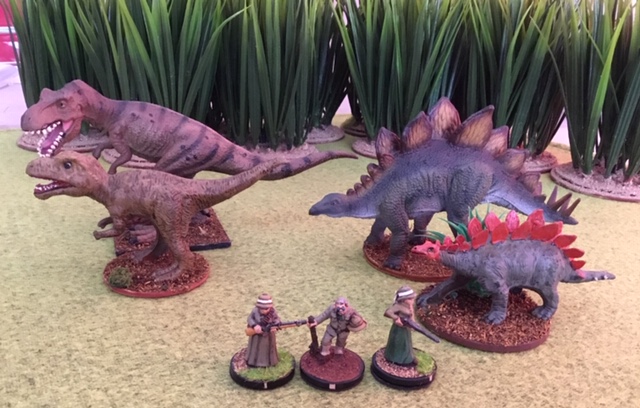 Time for another excursion into the distant past. Professor Dr Herbert Schadenfreud and his wife (Frau Edith) and daughter (Fraulein Elke) are taking a dinosaur hunting safari, courtesy of the Utterley-Barkinge Corporation. Their Utterley-Barkinge guide, David Attenborough, is behind the camera.

The rules are a slightly modified version of Palaeo Diet - Eat or be Eaten (Nic Wright / Ganesha) as used for the Grey Wolf Clan mini campaign posted in the last few days. The mods are:

The Time Service steam drone duly deposits our little party near a swampy waterhole, just the kind of place dinosaurs would come to drink. It’ll be back to collect them after five turns. The Schadenfreuds hope to pot at least five different species including an apex predator. That’ll impress the folks at home, especially those hoity-toity Wittgensteins!

I’ll be rolling dice at the start of each new turn (ie before any figures have activated) to see what dinosaurs appear, and where. There is a small chance of a nasty surprise leaping from ambush. 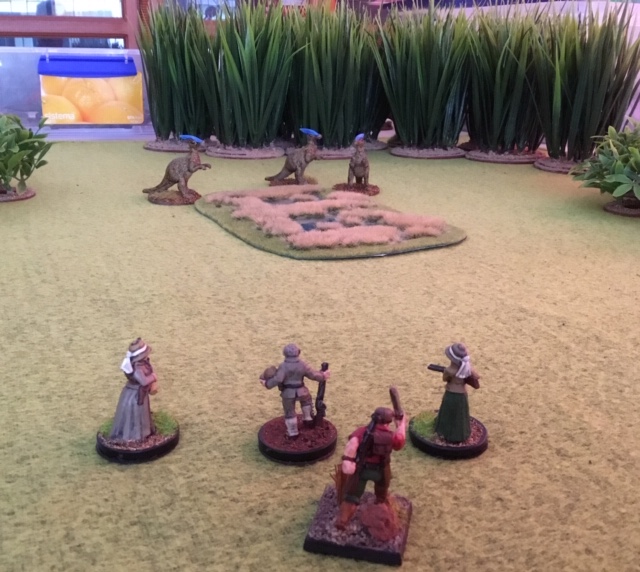 The above photo shows the hunters approaching the waterhole. Three harmless herd grazers are enjoying a drink.

The hunters advanced and blazed away (except David Attenborough who is not allowed to intervene unless a customer is in immediate danger). Two dinosaurs were wounded and the herd fled. 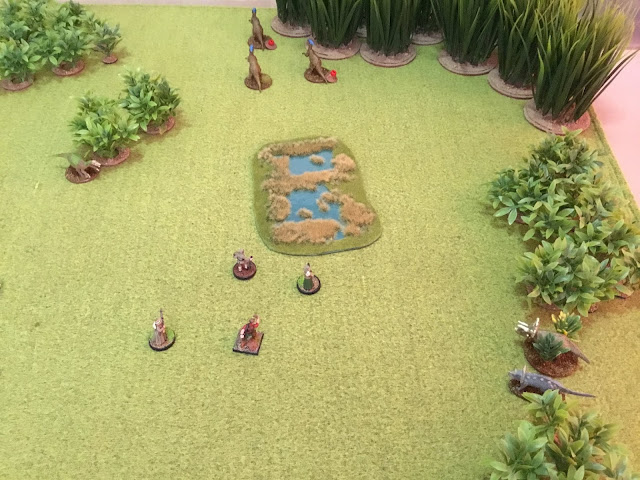 Here’s the start of Turn 2. At L a pack predator which had been stalking the herd grazers has switched its attention to the hunters. And at R a triceratops and calf (Giant grazer + herd grazer) have trundled into the picture.

Fraulein S, closest to the triceratops, took a shot at the adult and wounded it. The animal promptly charged her. It didn’t have the speed to make contact, but the charge justified Attenborough taking a shot, and he took the dinosaur to three wounds. Prof S remained fixated on the retreating herd grazers, and this time brought one down. First kill. No-one had paid any attention to the lurking pack predator.

At the start of Turn 3 a couple more herd grazers ambled up behind the triceratops. Fraulein S finished off the adult triceratops. Second kill. Her mother came up and took a shot at one of the newly arrived herd grazers, wounding it and causing it to flee (off table). Prof S turned his attention to the pack predator. He shot at it twice but missed, and the animal attacked. Attenborough had already activated (tactical error, remember to activate him last) so could not intervene. 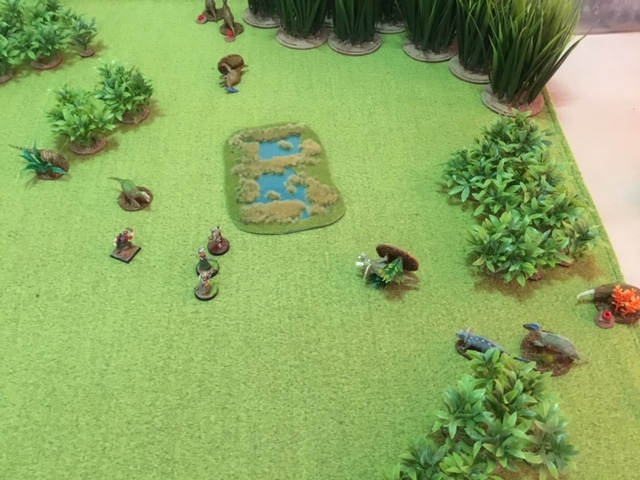 The next photo shows the start of Turn 4. A second pack predator has appeared behind the first, apparently it had also been stalking the original herd grazers.

The turn began badly as Prof S took another shot at the pack predator attacking him, wounding it but causing it to charge into contact. He was wounded but a lucky second shot finished off the predator. Third kill. Fraulein S came up to help her father, and shot at the second pack predator, wounding it and causing it too to charge. Attenborough finished it off from close range as it charged last him. Fourth kill. And Frau S completed the quinella by killing the herd grazer near the baby triceratops. Fifth kill.

The Schadenfreuds have achieved their goal of killing five different dinosaur species, including a Giant Grazer (triceratops), two different herd grazers, and two different pack predators. But no Apex predator. With only one turn remaining before the drone returns them to their own time, Attenborough secretly invokes the Uttlerley-Barkinge “keep the customer happy” policy. He blows a high frequency whistle that is irresistible to Tyranosauruses ... 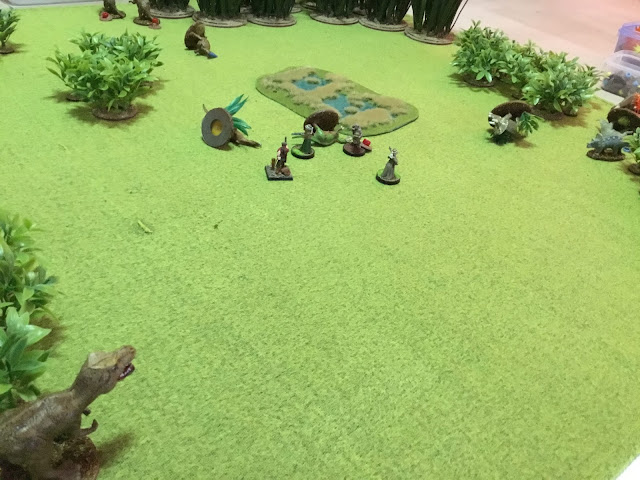 The last photo shows the start of Turn 5. A Tyrannosaur has emerged from the jungle behind the party, and it looks mean and hungry.

Total FUBAR ensued. Frau S was the first to react, she failed to activate (terrified no doubt) and the Tyrannosaur obligingly went into “predate” mode and advanced towards the nearest carcass. Prof S likewise fluffed his activation and the Tyrannosaur stalked up to the carcass and started to devour it. Fraulein S then took her shot, missed, and the monster attacked her but failed to cause any damage. Attenborough stepped up to shoot, and also missed.

We’ll have to extend the safari by one Turn to see what happens. The drone can’t risk coming in to a hot LZ anyway. 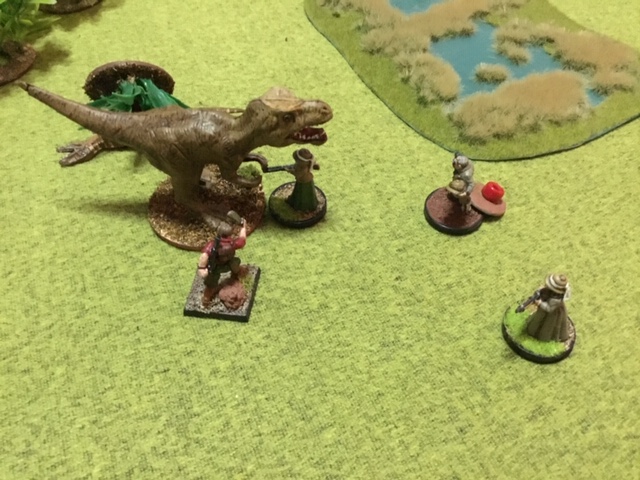 In fact it took two more Turns (of activation failures, shooting misses, and beast “attack” reactions) before the Apex predator was finally felled, by Fraulein Schadenfreud. But not before her mother had been attacked and killed. The Tyrannosaur really spread fear and panic among the hunters! Good to see. So the family S have achieved everything they wanted, but at a heavy cost. What will the neighbours think?