My wee lad and I got in a quick game of Palaeo Diet: Pulp this weekend, using my 15mm sci-fi collections. We played a variant of a scenario that will appear in the book (due very soon) - re-skinned of course for a more space operatic look. 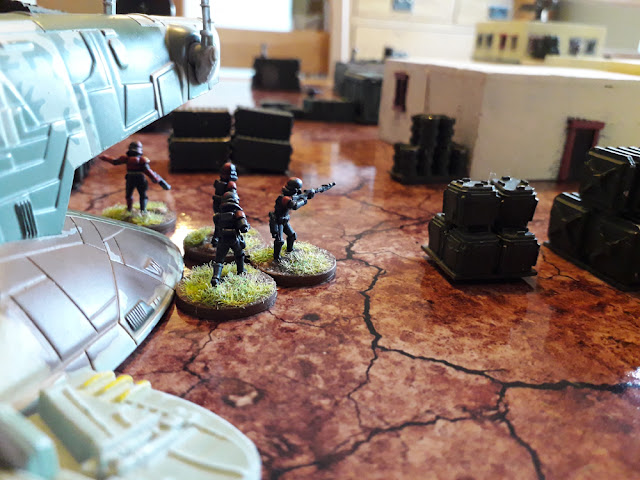 The transporter dropped the Imperial fire-team in a open landing space in the vicinity of a space pirate safe holdout. The team consisted of a commander with a pistol, two troopers with SMGs, and a sniper with a rifle. 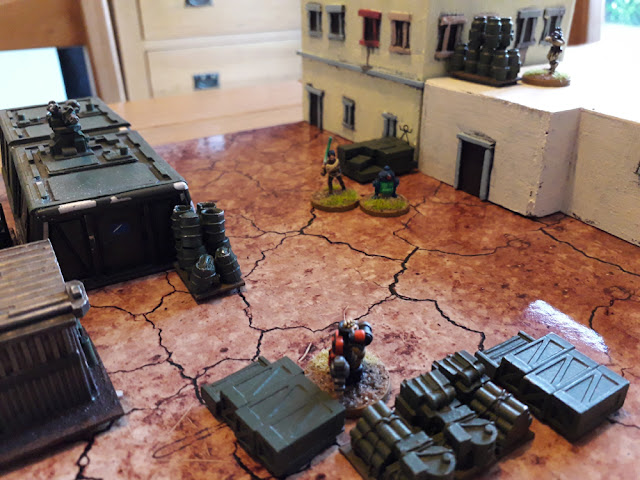 The target of their snatch-and-run mission was a droid containing valuable intel that had fallen into the pirates' hands. It was guarded by a mystic space wizard and a variety of space scum and villainy. 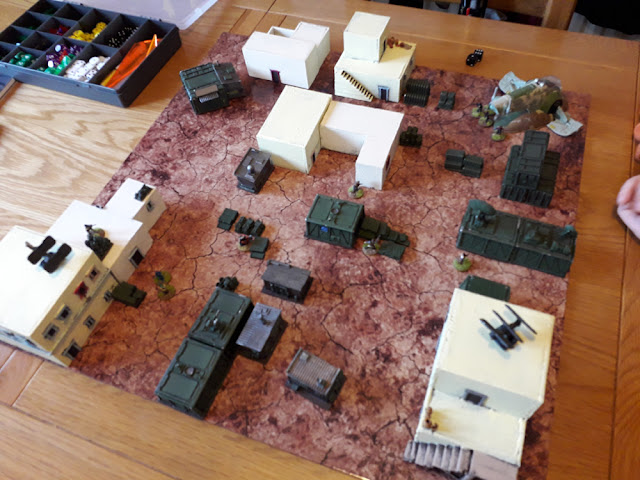 The stage was set, and the dice were rolled. 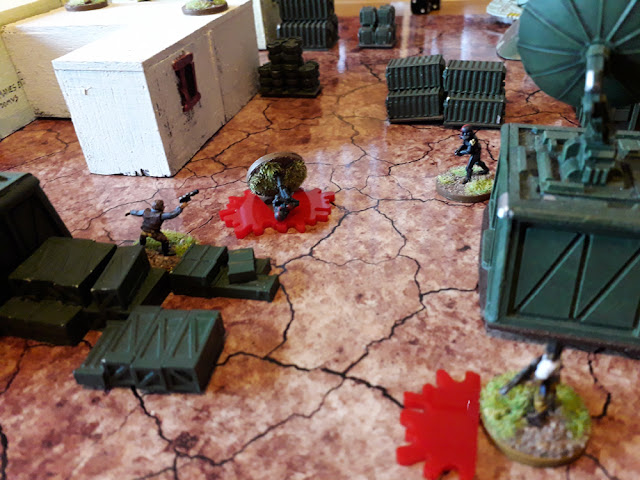 The two SMG-armed troopers opted to move straight towards the centre of the board, where they engaged in a brutal fire-fight with two pirates. On of the troopers was almost immediately gunned down, while only one of the pirates took a hit. 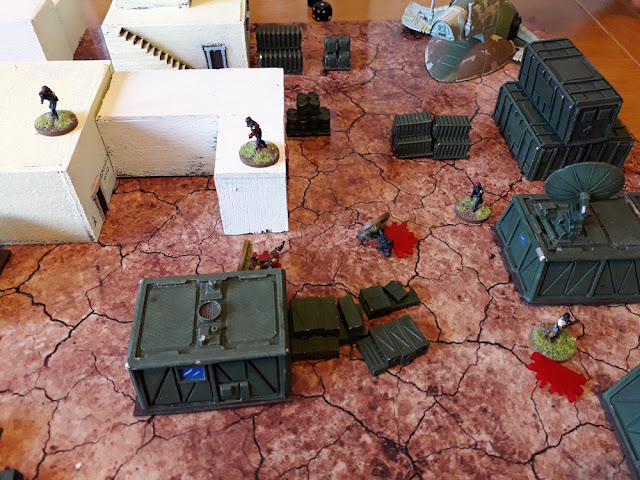 The commander and sniper managed to scale the flanking building and fired down from the rooftop. One of the pirates was dropped, while his wounded companion started to back away. After exchanging shots with the other SMG-armed trooper, the wounded pirate was killed, but the trooper took a wound himself. 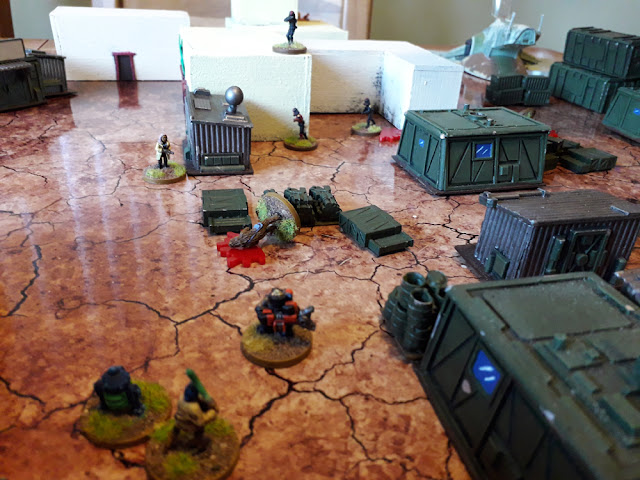 With support from the sniper on the roof, the commander and wounded trooper pushed forward. What was supposed to be a routine extraction mission was getting messy. A lumbering hairy pirate tried to stop their advance, but despite firing several shots with his shotgun, failed to mark the Imperials before being killed himself. 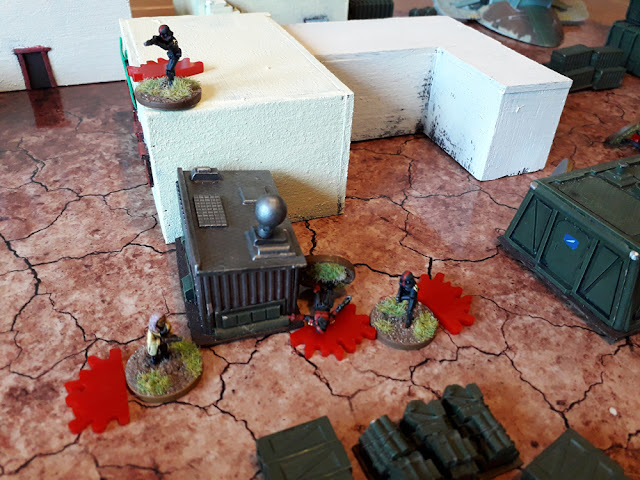 From round the corner of the building, another pirate started to blaze away with her shotgun. This time, the commander took two consecutive hits and fell to the ground. The sniper was also hit by one of her shots, but managed to place a hit on her in return and she was finished off by the wounded trooper. 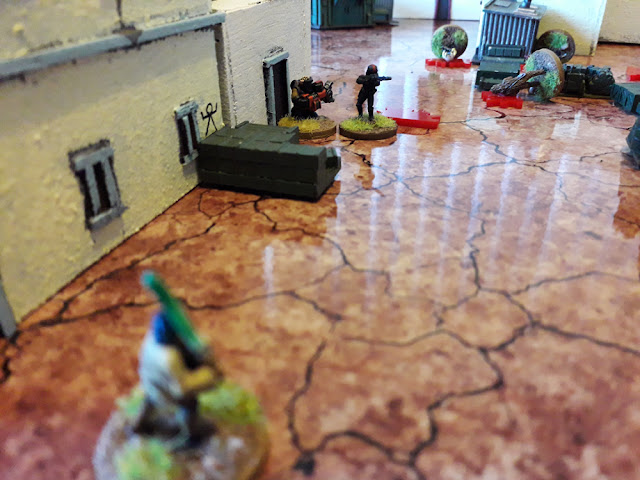 All of the bloodshed had caused the other pirates to fall back away from the droid. The sniper risked a dash forward, activated the droid, and then started to withdraw. However, the space wizard watched the sniper's bold move incredulously, and summoned another of his minions (a power-claw armed space dwarf!) who emerged from a doorway right next to the sniper. 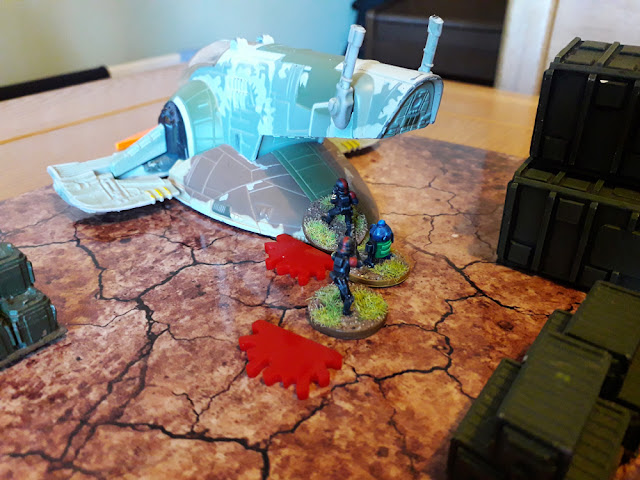 Preferring discretion to valour - and the high chance of becoming a statistic - the sniper legged it. Both the sniper and the trooper, wounded as they were, managed to get back to the extraction point with the droid and were airlifted off-world.

The mission was technically a success, but someone will now have to write a couple of letters to the parents of the two Imperials left behind.