As part of the playtesting process, five foolish players set out to play several years of a campaign, combining battles with diplomacy, recruitment and logistical challenges. The following post chronicles the opening year in the Trollbridge War.

The sprawling city of Trollbridge controls the only crossing of the River Essence between where it rises in the Watershed Downs north of Duncreggae, and where it empties into the broad marshlands south of Barrowfield. A vital node in the trade route inland from the bay of Byzernium, Trollbridge maintains a precarious neutrality between it’s the human neighbours in Balquhidder and Byzernium. To the west, beyond the ancient Wyldwood, lies the small halfling principality of Hearthshire, while stories of fur-covered shadows in the night and the distant chink of thousands of bony feet on the march heralds an emerging terror in the east. 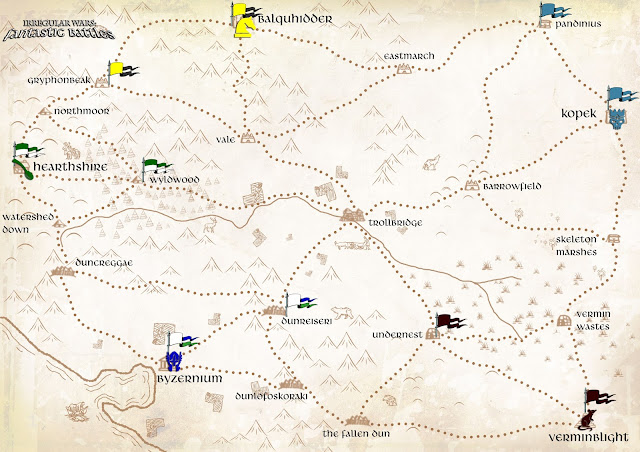 Balquhidder: The human Kingdom of Balquhidder starts in control of Balquidder City and the mountain stronghold of Gryphonbeak. It allies with Byzernium and Hearthshire, and musters a 500 point army.

Byzernium: The human city-state of Byzernium starts in control of Byzernium and the outlying fort at Dunreiseri. It allies with Balquhidder and Hearthshire, and musters a 500 point army.

Hearthshire: The halfling principality of Hearthshire starts in league with the denizens of the Wyldwood. It allies with Balquhhider and Byzernium and musters a 500 point militia.

Kopek: The necromancer-lord of Kopek starts in control of Kopek and exercises control over Pandinus. He allies with Verminblight and summons a 500 point horde of undead minions. 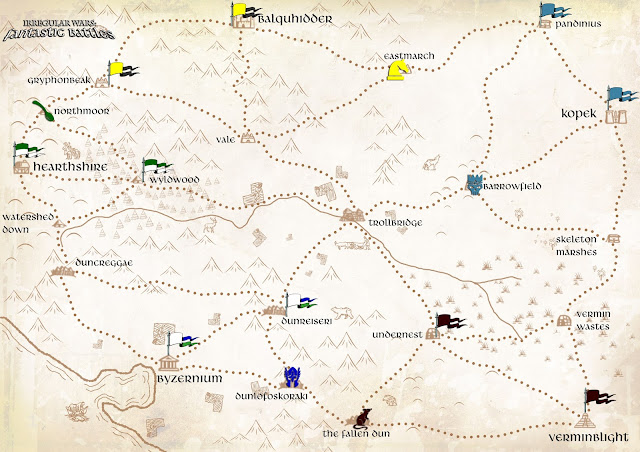 Balquhidder: The army of Balquhidder marches on Eastmarch and quickly brings it in within the borders of the kingdom.

Hearthshire: Hearthshire’s militia approach Northmoor and open negotiations with the folk there. No decisions are reached, but the tea is good.

Kopek: The undead horde attack Barrowfields but the brave defenders hold out, hoping for assistance.

Verminblight: The ratkin swarm towards the ruined remains of the Fallen Dun and encounter pockets of resistance holding out among the destruction. 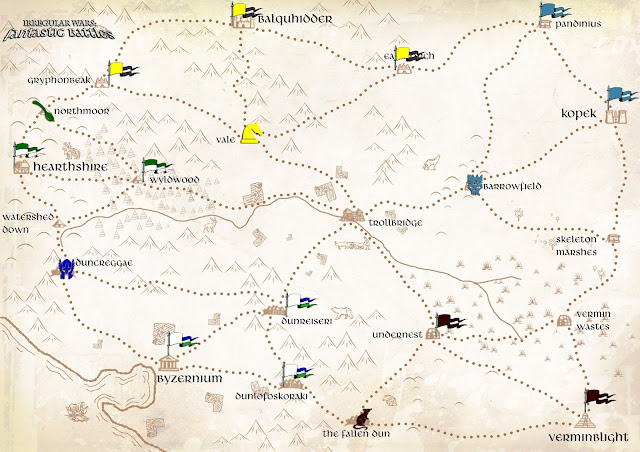 Balquhidder: The army of Balquhidder continues on its circuit to Vale which eagerly joins in the human confederacy.

Byzernium: The army of Byzernium Approaches Duncreggae and secures it as another strongpoint for the southern humans.

Hearthshire: Hearthshire’s militia move into aggressive negotiations at Northmoor with a smoked cheese dish served with chilled cider. No decisions are reached.

Kopek: Barrowfields falls to the undead horde and its defenders are ‘enrolled’ in the undead legions of the mighty Sekra the Great.

Verminblight: A ratkin colony is established at the Fallen Dun as the last resistance is extinguished. 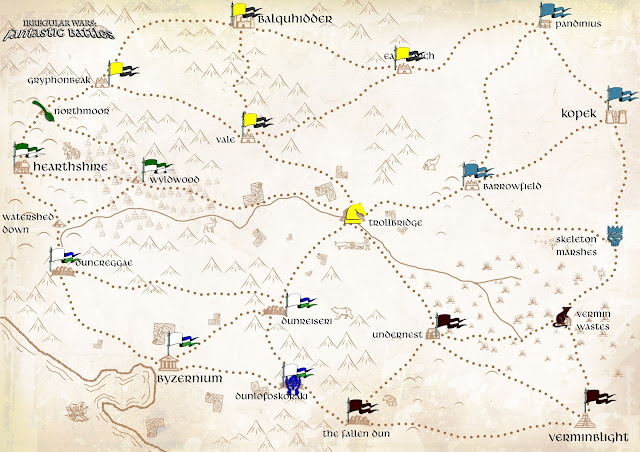 Balquhidder: The army of Balquhidder passes from Vale to Trollbridge. After intense negotiations and the promise of some serious tax exemptions, the city joins with Balquhidder as bulwark of the North.

Byzernium: The army of Byzernium returns to Dunlofoskoraki to inhibit further ratkin expansion in the area.

Hearthshire: Hearthshire convinces Northmoor of the benefits of coalition and great celebrations are organised including three consecutive evenings of 36 course degustation menus.

Kopek: The undead minions march on the Skeleton Wastes and find many more willing recruits as marshland falls to Kopek.

Verminblight: The swarm return east to the Vermin Wastes, establishing another colony and creating a link with their allies in Kopek.

So, no battles in Year 1 of the campaign, but all but one of the regions are now under the control of one of the five powers. Watershed Downs retains its independence for now, but any state looking to seriously expand will need to invade lands controlled by another player.

The stage is set for a clash of empires in Year 2.

Balquhidder: Balquhidder renews its alliance with Byzernium and Hearthshire, and musters an 800 point army.

Kopek: Kopek continues its alliance with Verminblight and summons a 700 point horde of undead minions.

Verminblight: Verminblight continues its alliance with Kopek and breeds a 700 point swarm of ratkin. 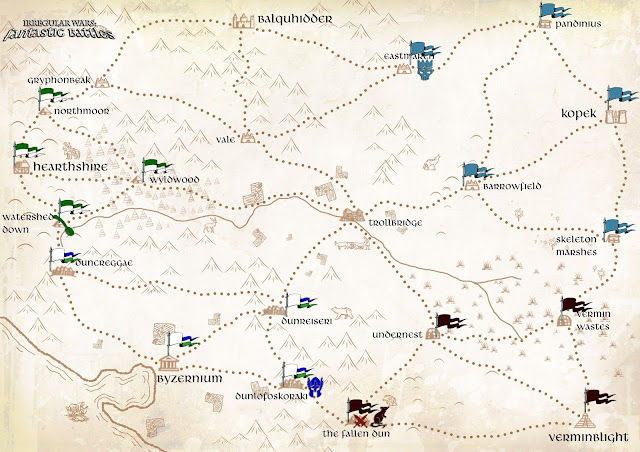 Balquhidder: Revolution! The people of Balquhidder’s rise up and topple the governing elite. The provinces re-establish their autonomy as Balquhidder’s empire collapses.

Byzernium: The army of Byzernium returns from Byzernium to Dunlofoskoraki and then advances as far as the Fallen Dun in an attempt to return the region to its historic Byzernian control.

Hearthshire: The Hearthshire militia marches on Watershed Down and, after a rabbit stew established Hearthshire’s suzerainty over the region.

Kopek: The minions of Kopek shamble to war, passing through Pandinus to invade Eastmarch. The regions recently gained autonomy is shortlived as the undead establish control.

Verminblight: The ratkin army surges from Verminblight west to struggle with the Byzernians at the Fallen Dun. 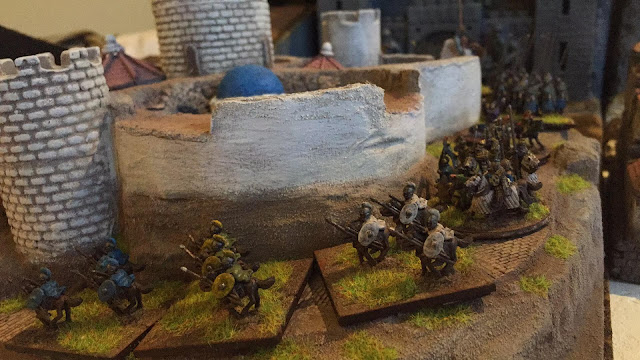 The men of Byzernium rode out from Dunlofoskoraki and gave battle to the ratkin of Verminblight below the ruined walls of the Fallen Dun. Although Verminblight was that day the victor and the army of men withdrew, the great slaughter of ratkin left the swarm weakened. 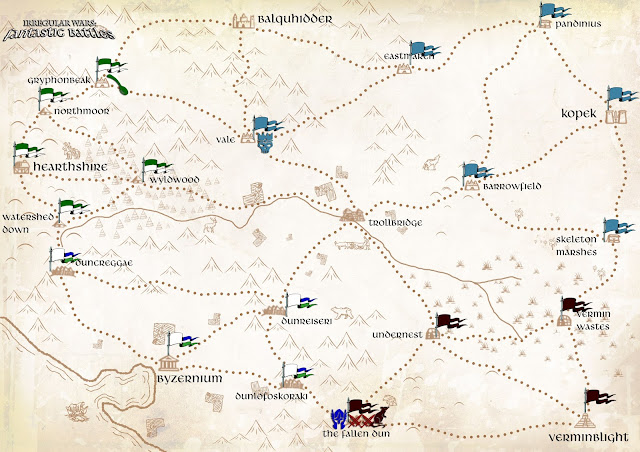 Byzernium: Having been forced back to Dunlofoskoraki, the army of Byzernium returns to the Fallen Dun to meet the ratkin a second time.

Hearthshire: The halfling militia approaches Gryphonbeak which opens its gates, welcoming a steady suzerain following the collapse of Balquhidder. The eagle egg omelettes served at the celebration add a touch of class.

Kopek: The undead horde continues its advance and marches on Vale. Deprived of centralised government, the city quickly succumbs.

Verminblight: The ratkin swarm remain at the Fallen Dun to repel the human invaders.

And there the chronicle falls silent. The pestilence sweeping the land in 2020 forced the remaining warlords to retreat to the isolation of their strongholds to await more healthy times to come.