ProjectBACCHAE - where else can you find an erote riding an elephant? 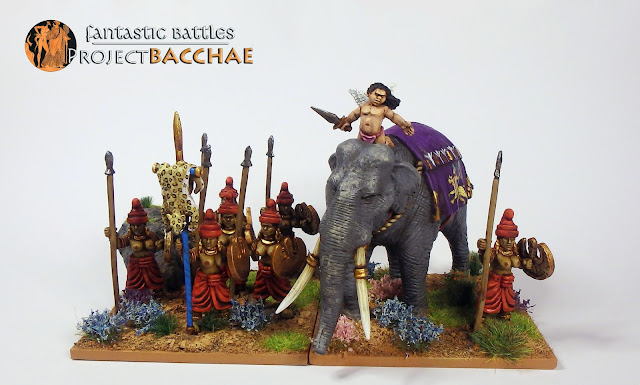 Back in July I showed my yakshi Maiden Guard, a hypothetical legacy of Dionysos' mythological conquest of India. This lovely nellie marks a much better represented Indian element to my Dionysiac triumph. Elephants became a symbolic of Indian conquests from the reign of Alexander the Great, and appear quite frequently in Hellenistic and Roman art in conjunction with Dionysos. The images below are particularly nice examples (even if the elephants appear to be from the wrong continent...).
The 28mm elephant itself is from Aventine Miniatures and is a lovely resin piece with metal tusks and tail. The erote mahout is from Maurauder Miniatures (with legs reposed), and the additional yakshi is from Thistle and Rose Miniatures.

2nd century AD sarcophagus in the Museum of Fine Arts, Boston. Here the elephants draw Dionysos in a biga, but are ridden by erotes. 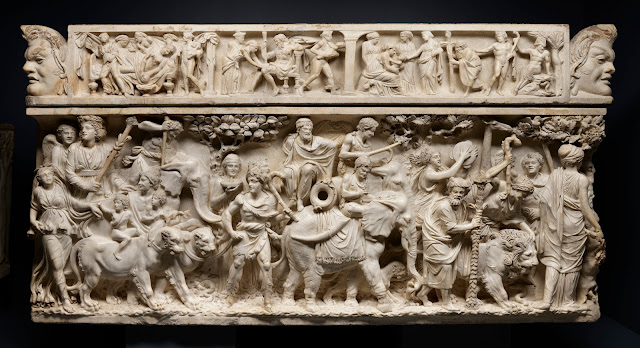 2nd century AD sarcophagus in the Walters Art Museum. I suspect the mahouts of these elephants are supposed to be satyrs.

I would have liked to paint a Hellenistic tapestry-style saddlecloth for the elephant, but knew I would never manage anything half so elaborate. Instead I opted for a simple palmette design and a single scene. The left hand side shows Dionysos riding a leopard, based on the famous Pella mosaic (below). The right side is a free-thinking amalgamation of different dancing maenads and Eros from a variety of frescos and sculptures. 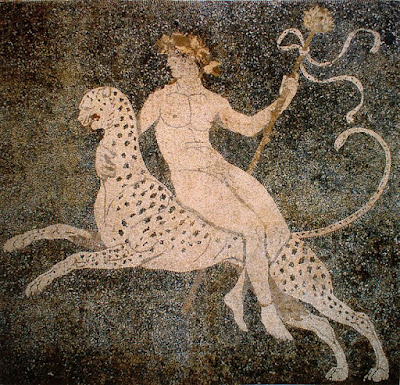