Here is my late Seleukid DBA army - this was the army which sucked me back into wargaming. They are 15mm, the figures are Xyston, the tent is Baueda. I rarely win with them, but that's ok - I'm devoted to the history not the victories....  <holding back tears> 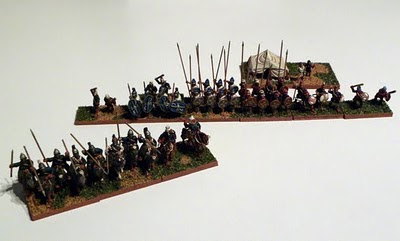 The latest Seleukid list covers the period 166-83 BC. The dates really do seem very arbitrary - the start date is in the middle of the reign of Antiochos IV Epiphanies, and the end date is 19 years before the end of the Seleukid kingdom. It used to be believed that the Seleukid territories were conquered by Tigranes II in 83 BC, but it has now been established that he did not take Antioch until 75/4 BC, Damascus (which was probably the capital of Kleopatra Selene and Antiochos XIII) until 72 BC, or Ake-Ptolemais until 69 BC. The Seleukids were then re-installed in Antioch from 69-64 BC. Never mind. DBA is an abstract enough system that I suppose real dates aren't that important.... are they?

I went with a real cosmopolitan feel with these guys, a mix of Greco-Macedonian settlers (one of the knights, blade and two of the pike), Kilikian mercenaries (the auxilia), and generic Aramaic/Iranian (the rest of the mounted troops, psiloi and the other half of the pike. 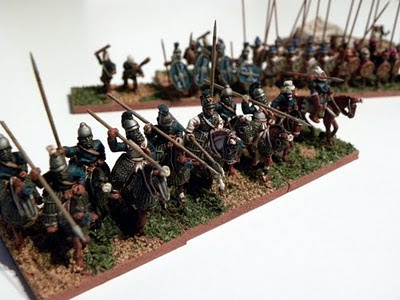 The Basileos and the cavalry. 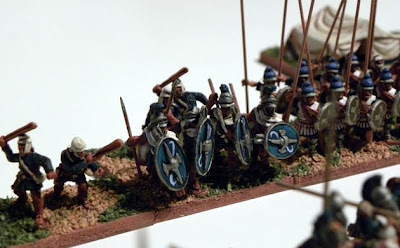 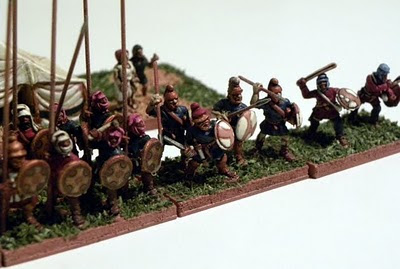 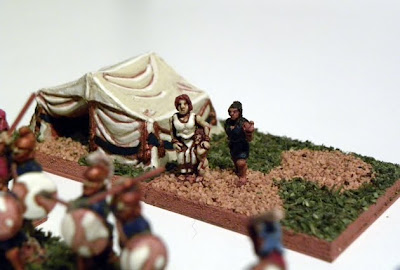 The camp with followers.