Here is the second batch of painted 15mm gladiators. One thing that painting these little guys has shown me is that while my moderate painting skill makes sharp, well sculpted figures look good, it doesn't have quite the same impact if the miniatures aren't the finest to start with. Here they are together to give an idea of how they scale up. Again, they have yet to benefit from a spray of Dullcoat. 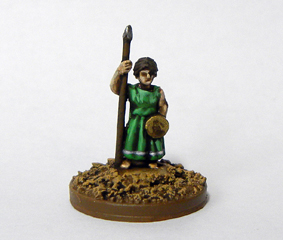 This lovely lass is from Donnington's slave revolt range. She's not technically a gladiator, I think she's just supposed to be an escaped slave, but I will make her available as both a possible faction member in Antioch, and also as an over-dressed gladiatrix. 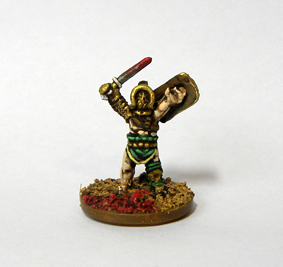 This murmillo/secutor (vel sim.) turned out much better than I had hoped. He looks so victorious that I gave the ground before him a liberal soaking in blood. I would have smattered his body with red as well but with figures so small there is always a chance that green clothes with red spots will look a bit like a nose bleed. His shield is decorated with two yellow crescents - and I'm not too sure how he's holding it... 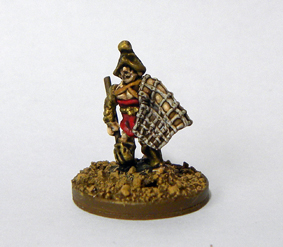 This retiarius will do the job. I much prefer the chap I have already painted, this guy is a bit static. I do, however,  like the way the net drapes over his left arm. 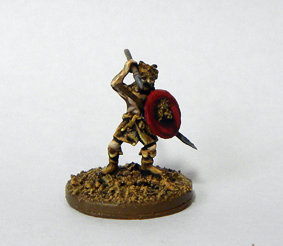 This velite is a Thracian peltast I had lying about with a shield appropriated from the Outpost Wargames gladiator pack. 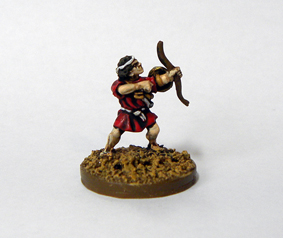 This Cretan archer by Xyston wil serve at a pinch as a sagittarius - when he's not serving in the Antiochene militia. The guys as Xyston were very generous and allowed me to order a half pack of Cretans (and half a pack of rabbis) so I could equip this guy and have archer statues for my temple of Apollo. 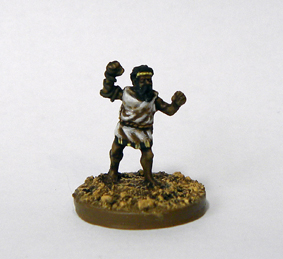