Just a couple of quick progress shots today. First up a photo of my suburb as it stands. I sprayed some of the simpler buildings with a textured paint as a bit of an experiment, then the whole lot (and the 2'x2' base board) were liberally undercoated with dark brown matt. I'm hopeful that the actual painting of the buildings will not be too complicated; I've never attempted buildings at this scale before so I will start with some of the smaller boxy structures before attempting any bigger houses or public buildings. 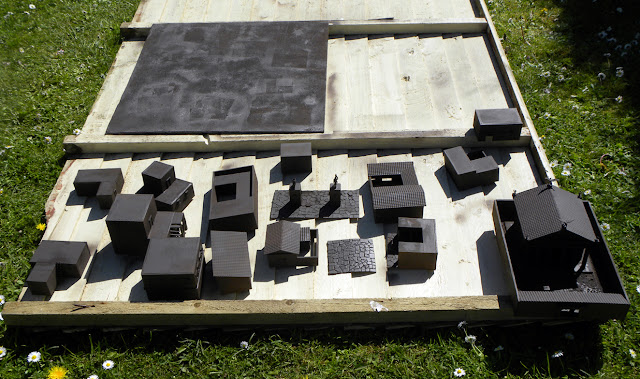 Also for today is a snapshot of one of the factions that I'll be using in playtesting. These guys are all 15mm Xyston Jews but, in a wonderfully ironic twist, will represent a group of Syrian Arabs. The boxer has been shown before (as a potential gladiator), he is a zealot with a dagger removed; the other two bareheaded chaps are also zealots, they will be used as a henchman (with the club) and an assassin (with the sword). Their leader will be the converted rabbi figure with sword, the other rabbi figure will be a blind prophet (... Life of Brian style).