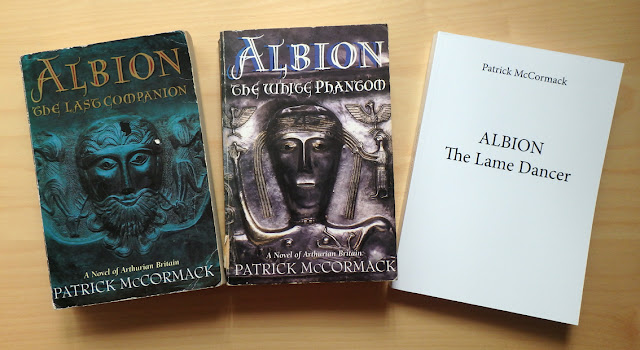 Well that is me super excited! Far and away my favourite retelling of the Arthurian saga is Patrick McCormack's Albion trilogy: The Last Companion (1997), The White Phantom (2000) and The Lame Dancer (2008). Set ten years after the death of Arthur at the battle of Camlann, the stories follow one last survivor who has since become a hermit, as well as a cadre of characters from the next generation as they struggle to negotiate the feuding tribes and kingdoms that have re-emerged after the fall of Arthur.

Through a combination of dream/nightmare sequences, memories, and stories told throughout, the story of Arthur's rise and rule is artfully told so in essence you get two different but connected stories told throughout. For me this is all first class inspiration for Arthurian wargaming and well worth tracking down if you haven't already tried them.

I first read The Last Companion when it was initially released although I didn't realise there were sequels until many years later. The problem is that the rights to the third novel are owned by Constable & Robinson who never published it. In 2007, a chap by the name of Howard Wiseman got in contact with McCormack and received permission to release it on the internet.

I found out about this last year and downloaded the pdf. However, I soon discovered (had reaffirmed) that I don't like reading books on electronic devices. Furthermore, a child who shall remain nameless dropped our tablet and I then lost the file anyway. Well, sick of sitting around not reading The Lame Dancer, the other day I re-downloaded the file and sent it off to be printed and bound in A5, finally securing a hard copy of the much longed for and anticipated final volume.

Well, now for the record, here are three different online sources if you are looking to complete the series (I'd urge you to track down the first two novels first).

Patrick McCormack's own site.
Seemingly a different version of the above.
Griffith University site.