Next up for the 10mm Macedonians are the bulk of their tribal infantry. These men were of a significantly lower social status than the horse-riding aristocracy and their mounted retinues. Generally speaking, early Macedonian foot are treated as mediocre peltasts or auxilia-style infantry.

They couldn't (or wouldn't) stand up to the Thracian infantry that Sitakles sent around the Thermaic Gulf in 429 BC (Thucydides 2.99), and, speaking of the force of the Macedonian Lynkestians, the Spartan commander Brasidas is rather scornful:

"Inexperience now makes you afraid of barbarians; and yet the trial of strength which you had with the Macedonians among them, and my own judgment, confirmed by what I hear from others, should be enough to satisfy you that they will not prove formidable. Where an enemy seems strong but is really weak, a true knowledge of the facts makes his adversary the bolder, just as a serious antagonist is encountered most confidently by those who do not know him. Thus the present enemy might terrify an inexperienced imagination, they are formidable in outward bulk, their loud yelling is unbearable, and the brandishing of their weapons in the air has a threatening appearance. But when it comes to real fighting with an opponent who stands his ground, they are not what they seemed; they have no regular order that they should be ashamed of deserting their positions when hard pressed; flight and attack are with them equally honourable, and afford no test of courage; their independent mode of fighting never leaving any one who wants to run away without a fair excuse for so doing."

Further scraps of information regarding the Macedonian infantry can be found in the words Arrian put in the mouth of Alexander the Great, when castigating his men during the the mutiny at Opis in 324 BC.
"Let me begin, as is right, with my father Philip. He found you wandering about without resources, many of you clothed in sheepskins and pasturing small flocks in the mountains, defending them with difficulty against the Illyrians, Triballians and neighbouring Thracians. He gave you cloaks to wear instead of sheepskins, brought you down from the mountains to the plains, and made you a match in war for the neighbouring barbarians, owing your safety to your own bravery and no longer to reliance on your mountain strongholds. He made you city dwellers and civilised you with good laws and customs."

I am using Magister Militum's Greek peltasts - combining the long spear-armed, and javelin-armed chaps on the same base - to represent the Macedonian infantry. In loose formation, and with plenty of variation in shield designs (some plain animal hide and some painted), I'm quite happy with the look. Each unit has a 'tribal' colour to give a sense of unity, but this has been mixed in with white, grey and brown clothing to keep it rustic. 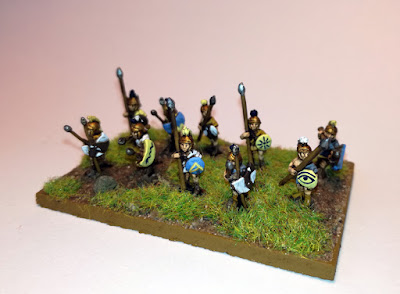 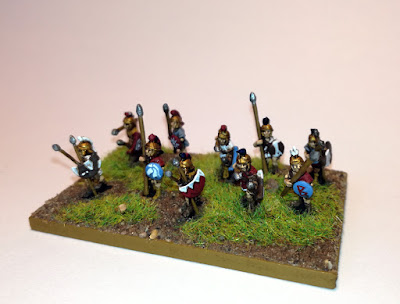 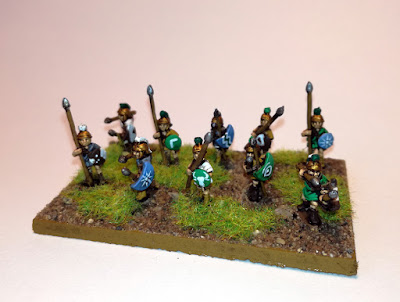 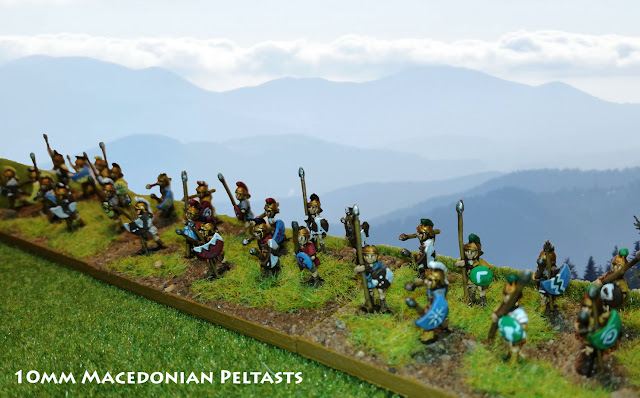