Into the sheepfold - Minos vs Gilgamesh

Staying on the Bronze Age wagon, this week we had another 6mm game of L'Art de la Guerre, this time ranging my yet-to-be-vanquished Minoans against Lee's Sumerians. This is the first time we've played a technically ahistorical game. However, as both armies are Bronze Age and chariot/pear based, what's a thousand years between friends? 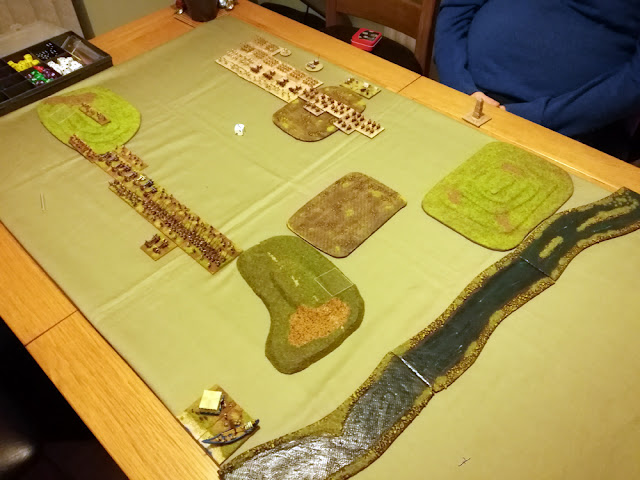 By the will of the gods - and a few dice rolls - my Minoans were defending again in a hilly area, this time with a river down one flank, a steep hill (behind which the Minoans stealthily hid their camp), two areas of brush and two ore gentle hills. 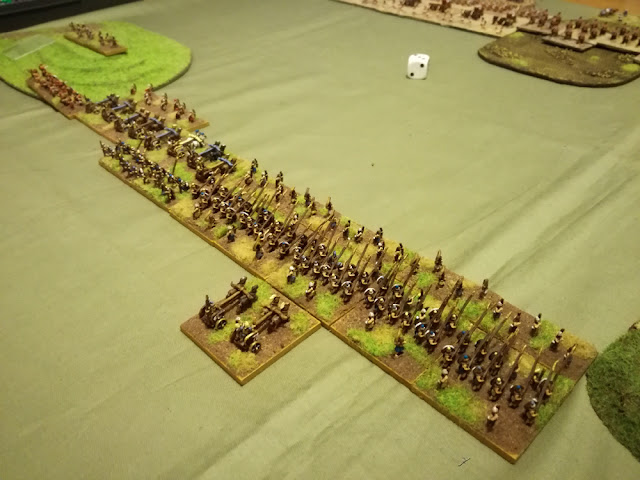 The Minoans were deployed in a pretty linear formation, between the hills, using the steep hill to anchor their right flank, a line of heavy infantry, then heavy chariots, with medium infantry extending up towards the gentle hill on the left flank. 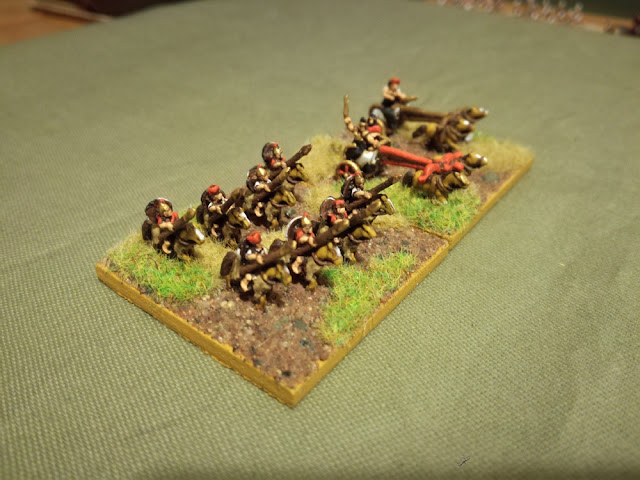 Ambush markers were deployed on both flanks and, in a ploy that was in equal parts ingenious, dubious and potentially drunken, I dispatched a grand sweeping (off table) flank march consisting of an allied commander embedded in a heavy chariot unit, and my mediocre medium cavalry. I have learnt in the past that flank marches can be really effective, but seldom are, and mostly turn up later than wanted. To mitigate that, I made this flank march tiny. As always with this army, I have a generous break point of 25. 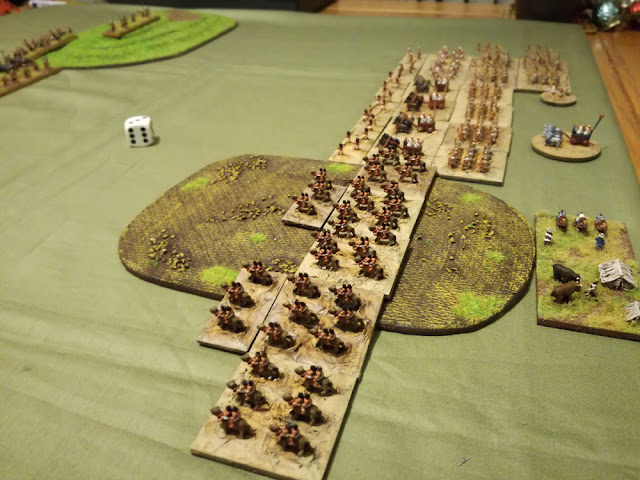 Leegamesh decided to mostly avoid the steep hill as he had no decent troops to take it, and instead deployed his Bedouin ally in the rough more or less in the centre of his deployment area, and squeezed the rest of his army over in the open ground to his right of the battlefield. Precisely where my glorious flank attack would hit home... provided all went to plan. Lee had a massive break point of 27. 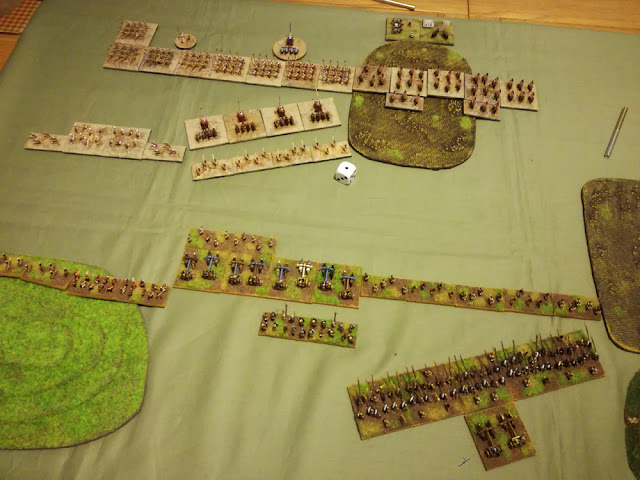 In the opening moves, the Sumerians inclined their front to advance their right, anchoring their left on the Bedouin command which, as luck would have it (Praise be to Tyche!), were hesitant and would not advance toward the Minoan lines. On the one hand, this was perfect, because I really wasn't sure which trick I could pull out of my Cretan bag to defeat the massed camelry. However, the flip side to their hesitancy meant that now, and throughout the game, I held back on my right, not wanting to get within range to trigger the Bedouins to action. In the first few turns, my glorious flank march failed to arrive. 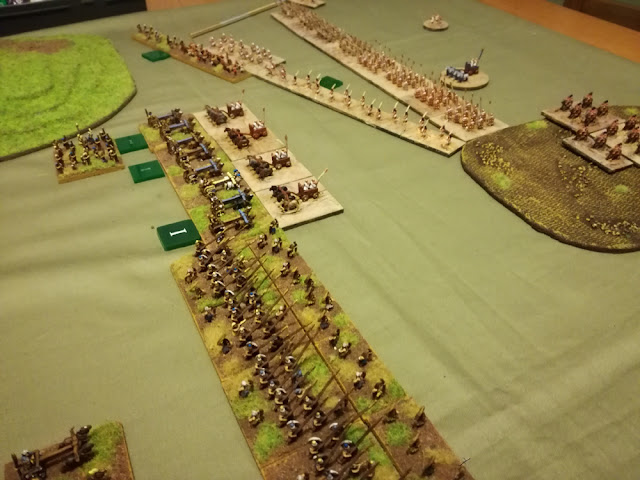 Because his line was so condensed, Lee had little room to manoeuvre and just threw his onager-drawn battlecars forward, unsupported, smack into the face of the Minoan heavy chariots. I was mildly confident because my chariots were all elite and one squadron included my embedded commander in chief, high king, priest king and all-round nice guy, King Minos. I didn't factor in that the Sumerians had impact, and presumably their donkeys smelt. The clash didn't quite go my way and three of my units were disordered. Only Minos' personal guard managed to draw their combat.

Over on the Minoan left, the Myrmidon swordsmen slabbered their way forward and cut through the Sumerian bowmen opposite them. 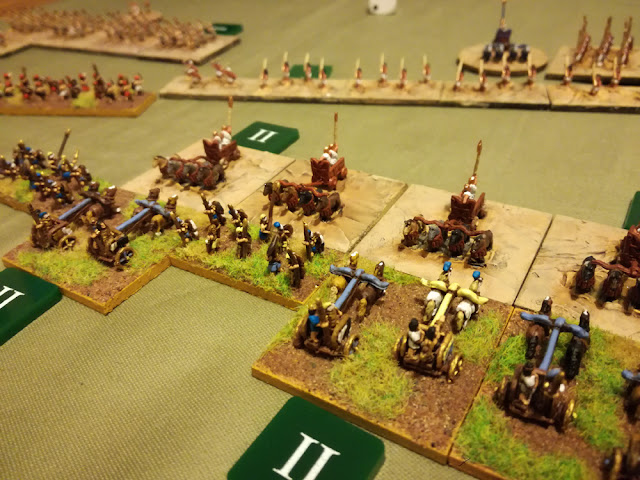 Although the Myrmidons were proving their worth once again - they are always a wee bunch of savage murderers - the chariot battle was a bit one-sided... the other way. All the Minoan chariots were suffering badly. One squadron had been routed, and even the Minoan foot guard of medium spearmen were not making the fight much more even. Turns out medium spearmen don't much like heavy chariots. 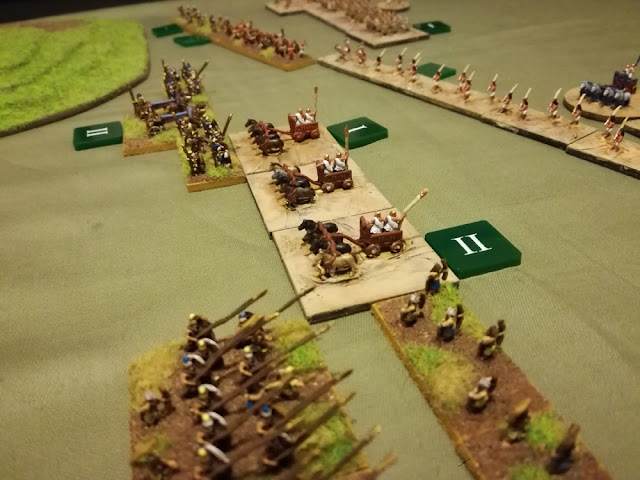 The Minoan chariotry crumbles as their noble warriors fall in the savage melee. Minos himself is mortally wounded and, while his charioteer manages to bring his body away from the filed of battle for burial, the centre command is now leaderless. 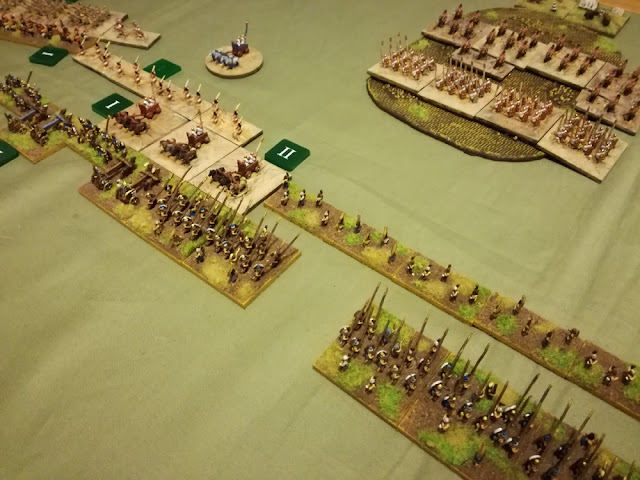 Screened by his skirmishers, Prince Nikos, the only other Minoan commander on the table (did I mention the flank march wasn't anywhere to be seen?), brought the heavy spearmen to the left to try to turn back the onager wagons. In the background, the regular Sumerian spearmen can be seen engaging in some formation changes to march back and forwards a bit. 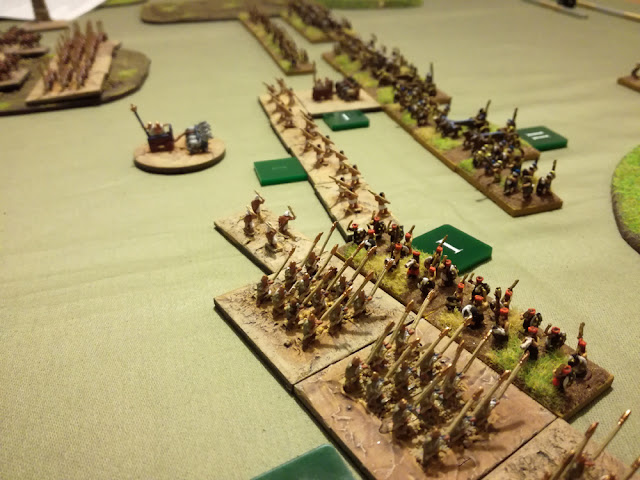 The successful Myrmidon medium swordsmen, now leaderless following the death of Minos, received a charge of mediocre Sumerian spearmen and one unit was disordered in the ensuing fight. 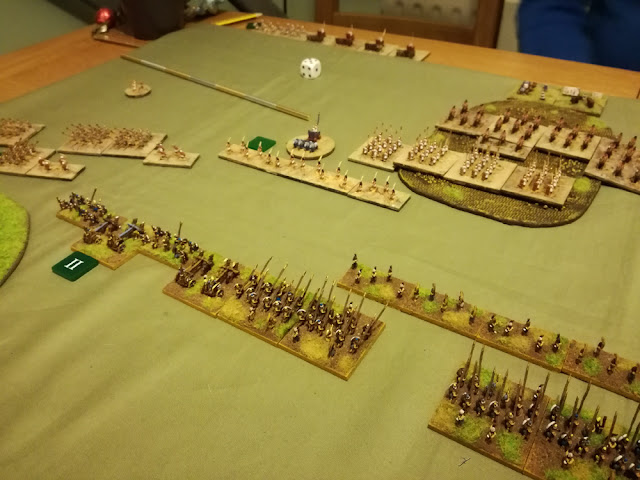 Prince Nikos' reinforcements managed to drive off the last of the Sumerian battle cars, but out on the Minoan left flank, the Libyan mercenary skirmishers were chased away and the Myrmidons were completely encircled and destroyed by the mediocre Sumerian foot and their supporters. In the background, the regular Sumerian foot have turn around to march back the other way again. 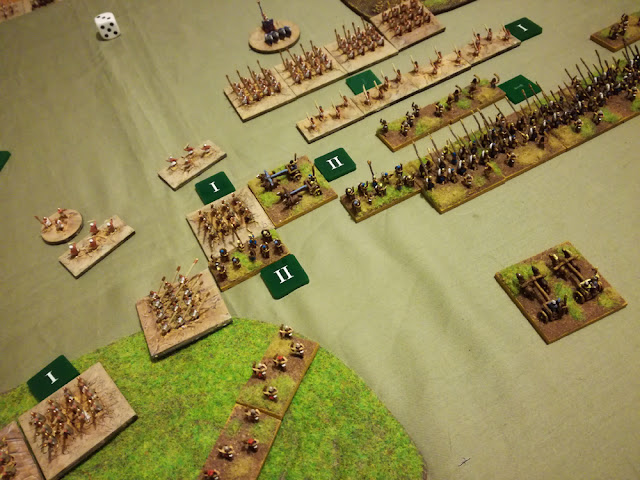 Eventually the Sumerian regulars found a part of the battlefield which felt right for them and turned back to face the Minoan centre. The Minoans at this stage were really struggling with lack of command options. The deceased Minos' remaining units did a lot of sitting around in disorder, managing - at their best- three CPs per turn, only enough to make one actual command. Still, as the (now unopposed) mediocre Sumerian foot came in and engaged the Minoan centre, the remaining elite heavy chariot managed to sweep into the the flank of the end unit, causing at least some disruption in the ensuing fight. 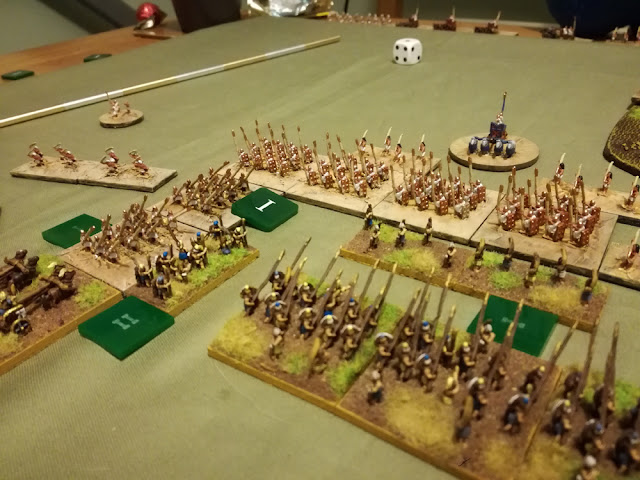 But not enough. The Minoan chariot squadron and the medium spear unit they were supporting both routed, and with that, the Minoan left was turned.  The Sumerian heavy foot finally made their way forward the take on their Minoan counterparts. The Minoan commander Nikos sent forward some skirmishers in a last ditch attempt to disrupt the Sumerians before contact was made. However, this brought them close enough to commit the Bedouin to the fight. 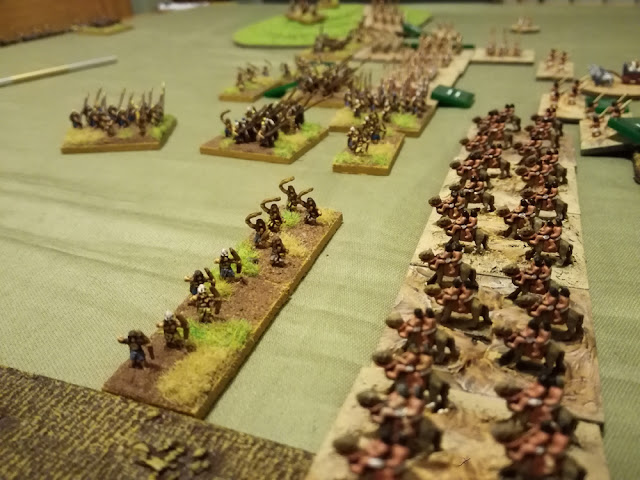 Hoards of camelry plodded forward, seeming to spit arrows with each step. The fate of the Minoan expeditionary force was sealed. 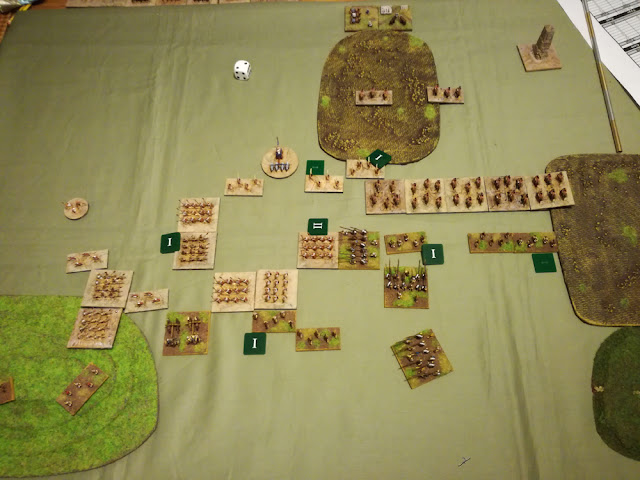 What a bloody mess. The Minoans suffered terribly in the jaunt to Mesopotamia. By the end of the turn, they had reached 29 breakpoints, against their threshold of 25. Meanwhile the Sumerians were only at 20 breakpoints out of 27. It is a sad day when Minoans die so far from the sea. And for so many to die? A national tragedy.