Starting off the new year the way I hope to continue, here are the latest reinforcements to my Early Macedonian army. I may be starting to over do things, but who doesn't like options right? The hoplites on the right in the photo above are the new lads.

While the first hoplite phalanx were vaguely themed blue with lots of Macedonian suns, these guys are vaguely red, with thunderbolts to work perhaps as hoplites in the service of one of the Upper Macedonian kingdoms (such as the hoplites in Lynkestian service in the 420s BC), or as Epeirotes. The aulos (double flute) player out front is the 'leader' marker, indicating the centre of the unit for line of sight purposes where necessary. 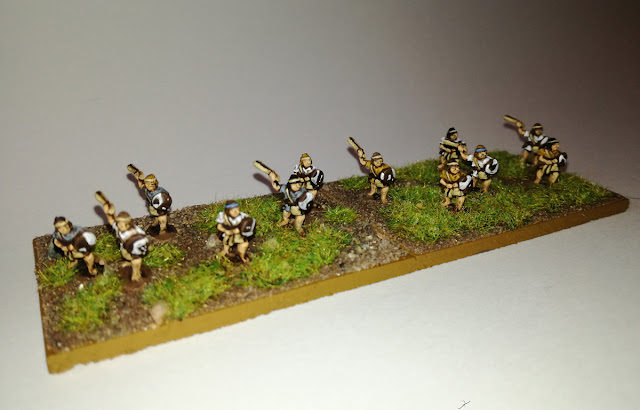 In support we have two units of psiloi slingers. There aren't any direct references to Macedonian slingers from the 5th century that I'm aware of, but the sling was fairly universal around the Mediterranean, and there is loads of archaeological evidence for units of slingers under Philip II (see HERE and HERE for example).