Returning to Antioch with Song of Shadows and Dust 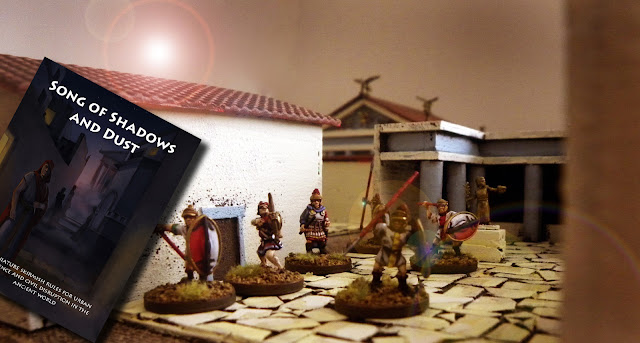 This week, Andrew, Lee and I met up to conduct some dirty deeds around the seedy streets of first century BC Antioch. Remarkably, the last time Andrew and I faced off playing Song of Shadows and Dust was five years ago! Back then, we played a great little three game campaign which saw his Palmyrene merchant faction drive my fishmongers (read 'pirates') guild out of one of the suburbs of Antiochia Mikros.

This was Lee's first foray with the rules. He ran the fishmongers guild (Kybiosaktoi) and Andrew led his Palmyrene merchants again. I went with a new faction, the Skenitai or 'tent dwellers' using a few pre-generated rosters from the book along with a pragmatic application of the custom faction builder software. 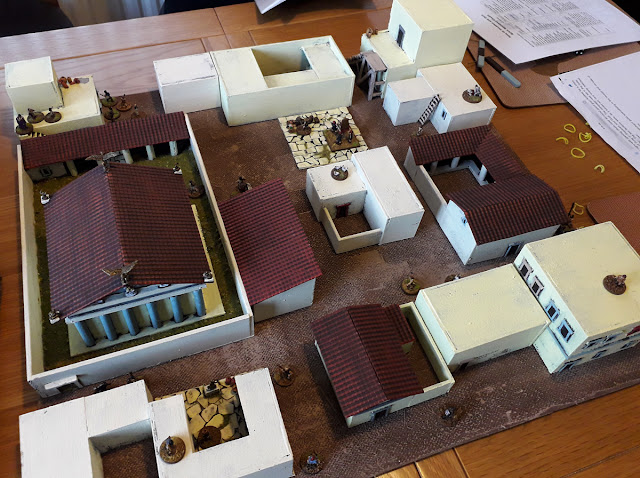 As a three player game, we placed three numbered tokens in a bowl to determine turn order. Whenever a turnover was rolled, we drew the next token from the bowl to determine who went next, placing all three tokens back into the bowl after each faction had had a turn.

Andrew set up the terrain and the 'Time of Day' roll indicated that it was morning time. The city had a quite bustle about it and sixteen civilians were placed on the table. Rolling for objectives, Andrew's Palmyrenes were tasked with keeping the kings peace - they earned victory points for taking out rival faction members, but lost them anytime a civilian was killed. Lee's fishmongers were being sent in to seize control of the area away from my tent-dwellers (who were just out looking to cause trouble). The three key buildings were the temple, the small tavern/bawdy house with a tiled roof adjacent to the temple wall, and the small house with courtyard in the very centre of the table. Any turn that ended with a Fishmonger faction member on or touching the objectives, Lee scored a victory point. Any turn one of my faction members were on or touching an objective lost Lee a victory point. 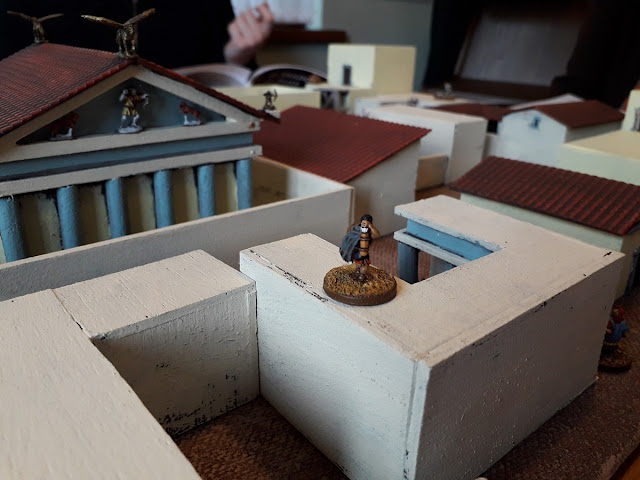 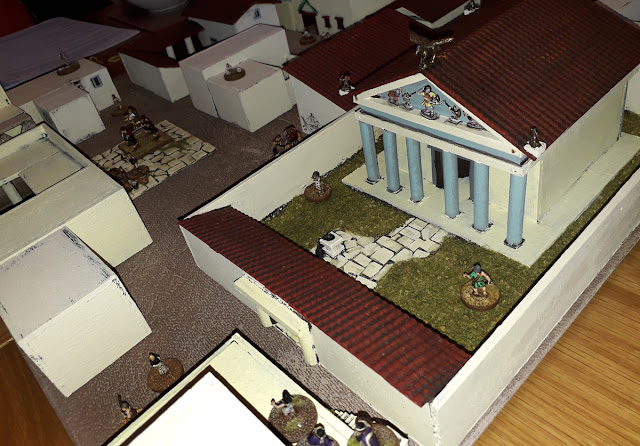 Andrew's Palmyrenes were deployed on the roof of a house on the far side of the temple (top left of the suburb), with a couple of lower-paid henchmen skulking in the shadowy alleys below. 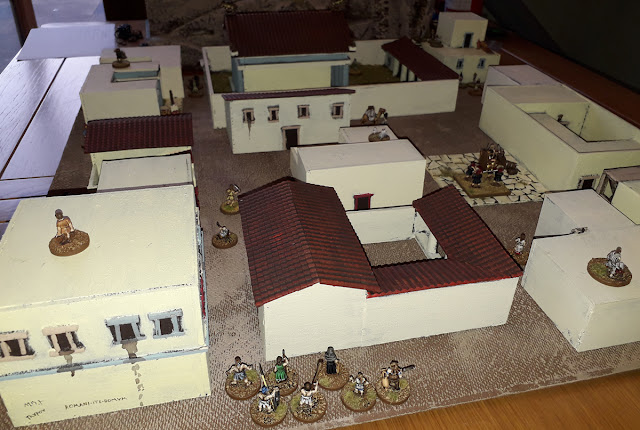 Lee's Fishmongers deployed together in a bunch in the centre of the far right hand side of the suburb. From there they had a straight run up the alley which would take them to each objective. Well, if my Skenitai didn't get in the way anyway. 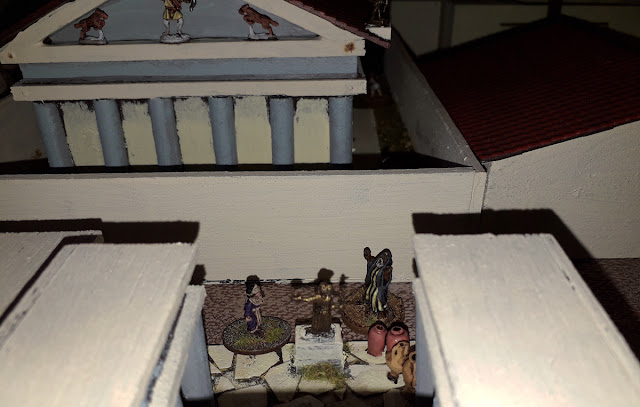 In the opening rounds, I managed to get my assassin into the temple grounds and against the temple itself, starting the game well by giving Lee a -1 victory point deficit. Meanwhile, the rest of my faction were pretty rubbish at activating. While Abd'Hadad, my distractingly ranty blind prophet, made his way slowly up the alley to get in the way of the Fishmongers, Andrew's famous Palmyrene courtesan slipped down behind the temple and into the alley behind him.

We were now faced with a bloody annoying situation where Abd'Hadad was distracted by the courtesan (he may be blind, but there are somethings he can still see), while she was distracted by his philosophical musings. For the remainder of the game, the two of them would get in each others' way and generally be a nuisance. Mostly to me. 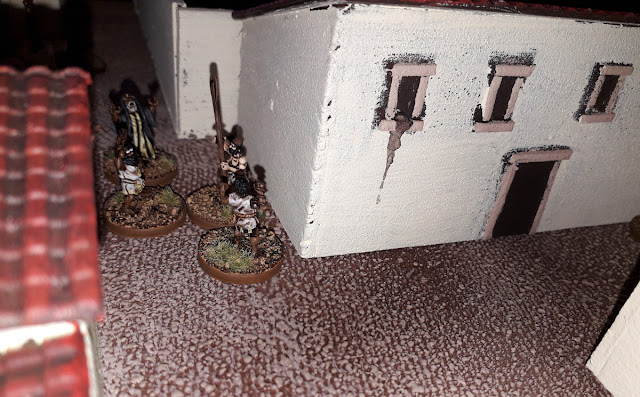 Zeuxis, Lee's oar-armed fishmonger, legged it up the alley to make contact with objective number two, the bawdy house. Unfortunately for him, Bargates, my tent dwelling faction leader managed to issue a group order to his two henchmen who rounded the corner together and attacked Zeuxis. Shamefully, even though they outnumbered him, Zeuxis reeked so badly of fish guts that the Skenitai failed to land any blows. 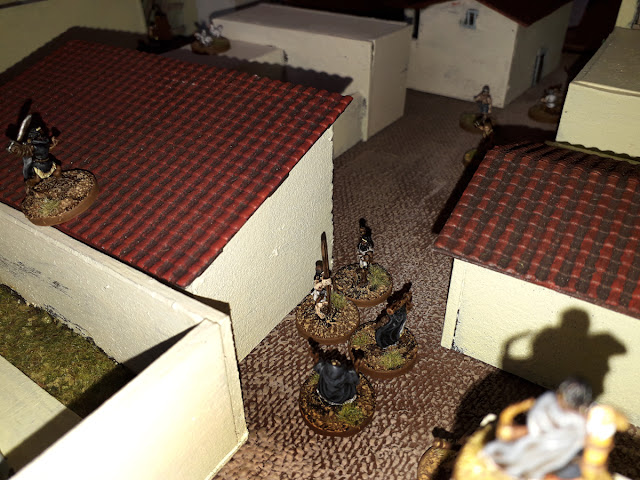 The blind prophet, hearing the commotion, managed to drag his attention away from the Palmyrene courtesan and move towards the fighting. I hoped I'd be able to get him forward enough to interrupt any more Fishmongers coming down the way. Iamblichos, my lethal assassin left the shelter of the temple and climbed onto the roof of the bawdy house hoping to drop down onto the heads of approaching foes - any of them at all, he's not all that discerning. 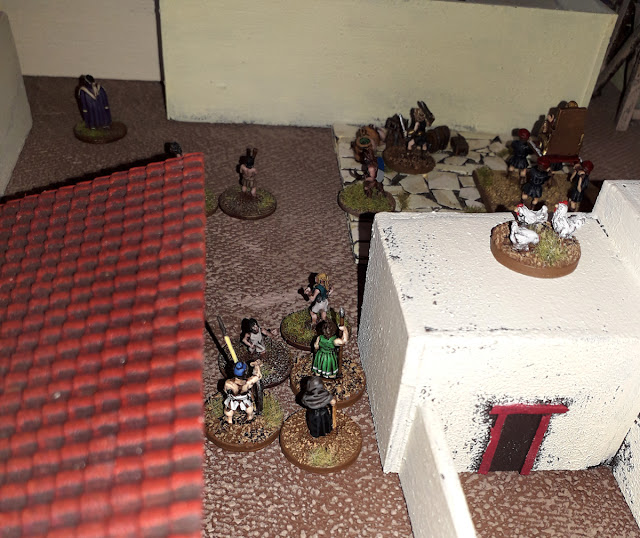 Instead of coming to the aid of Zeuxis, however, most of the other Fishmongers moved up the lane between the bawdy house and their third objective, the courtyard house. In the open square on the far side, the Palmyrenes had assembled and seeing the Fishmongers, the Palmyrene urchin and femme fatale dashed in against the foremost Fishmonger, hoping for a quick kill. 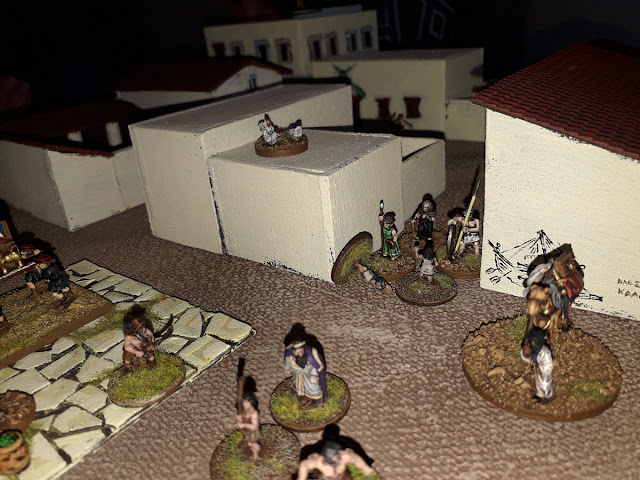 They didn't recon on Antiochis the Fishmonger-widow being armed with a spear though - you'd have through they would have seen it!? The Palmyrene femme fatale was knocked to the ground while her compatriots looked on in shock. 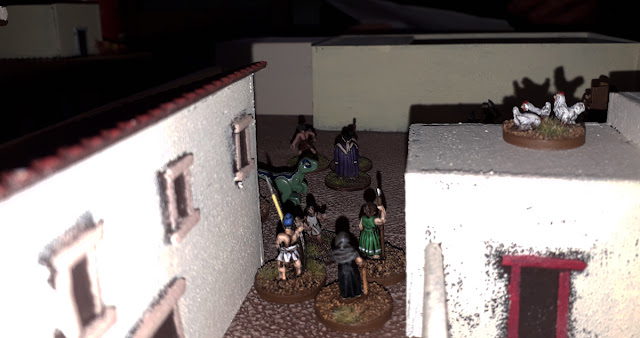 In her own activation, Antiochis plunged her spear into the fallen femme fatale, taking her out. Proving that my wee boy was present for most of the game, a small dinosaur then appeared briefly in the open square... 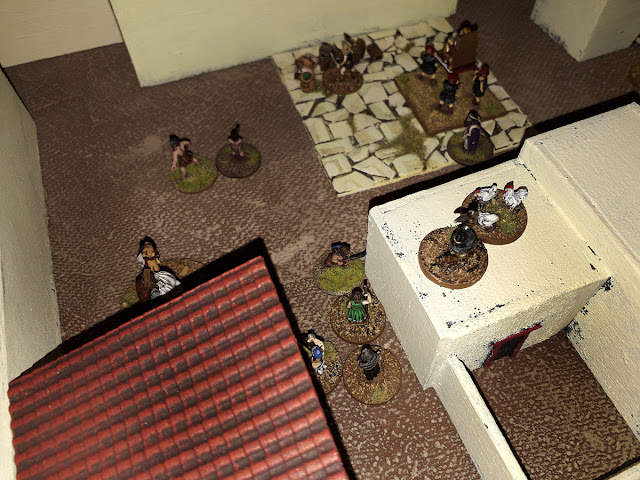 Apollonios, the retired veteran - now a nominally working as a fishmonger - used his own spear to smite the poor Palmyrene urchin. Above their heads, the Skenitai assassin lept from bawdy rooftop to the central house. His planned ambush falling foul of the fowl who made such a racket that everyone was alerted to his presence. Amid the chaos, the Palmyrene barbarian bodyguard threw himself into the fray, hoping to kill the widow Antiochis and avenge his fallen comrades. 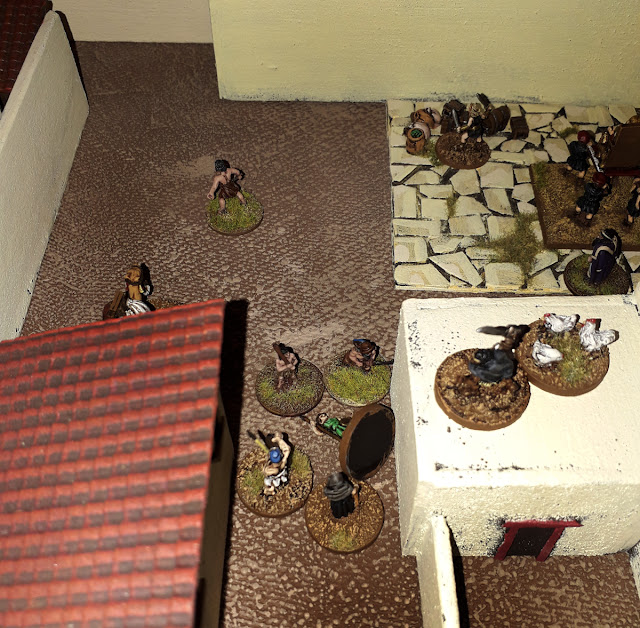 The barbarian knocked Antiochis to her knees, enabling the Palmyrene merchant-apprentice to duck in and finish her off with a savage cudgel blow to the back of her head. 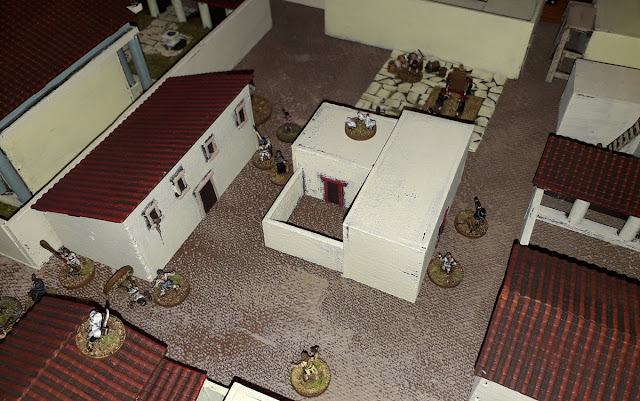 Back in the alley between the fountain house and the bawdy house, Zeuxis (the fishmonger henchman with oar) made a fighting retreat out of his scuffle with the Skenitai henchmen. However, he then lost his train of thought in the presence of a ranting prophet and a beautiful courtesan.

All of the Skenitai henchmen, including Abd'Azizos the archer, were completely distracted by the Palmyrene beauty. Their leader, Bargates managed to focus his mind enough to climb a building a leap away from her influence. Below him, Strato the one-eyed leader of the Fishmongers joined the fray, knocking the unarmed Skenitai henchman to the ground.

Meanwhile Iamblichos, the assassin dropped down from his rooftop perch to attack Europa, the fishmonger's apprentice who was hiding in the alley on the far side of the building. 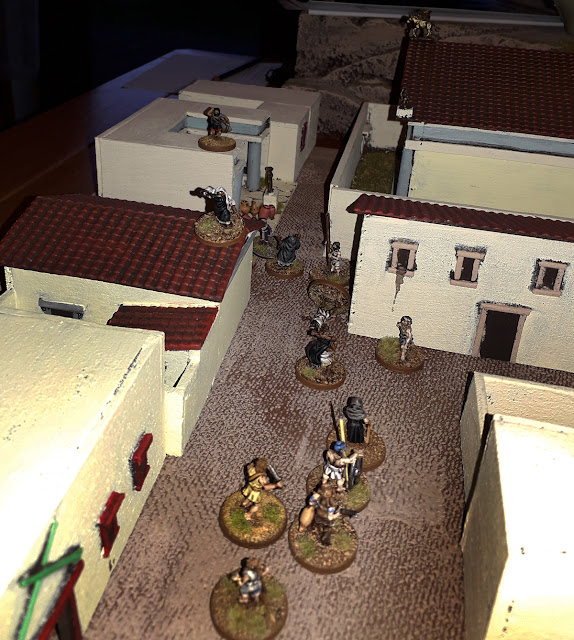 Not enjoying being assaulted on all sides, Strato issued a regroup order to his fishmongers and pulled most of them together into a cluster in the main alleyway. Abd'Aziziz, the Skenitai archer finally managed to loose a shot at Strato which went as disastrously wide as it could go. The only result of the shot was to cause a concerned nearby citizen to become active, joining the side of the Fishmongers who were clearly the innocent party in all this. Apparently. 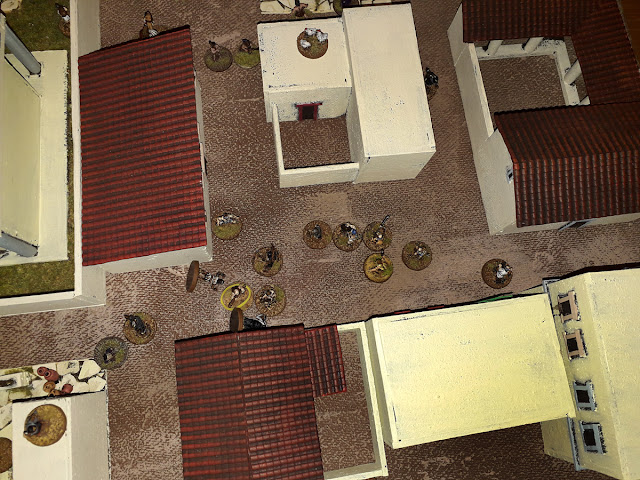 The Skenitai leader, Bargates, stood on the roof of his building, swinging his curved blade menacingly. Europa, the young fishmonger apprentice didn't much like the look of him and used her sling to try to take him down. Her shot missed, but the whizzing sound of the sling bullet passing his head was enough to cause Bargates to lose his footing and he slipped anyway. He survived the short fall into the alley, but still ended up on his back, surrounded by irate Fishmongers (plus one concerned citizen). 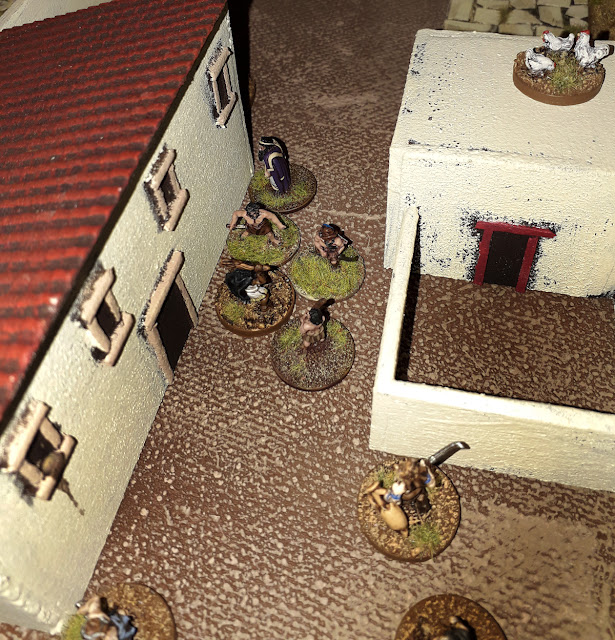 Between the bawdy house and central house, Barnebos (Skenitai henchman with club) was surrounded by Palmyrenes and things were starting to look a bit grim. 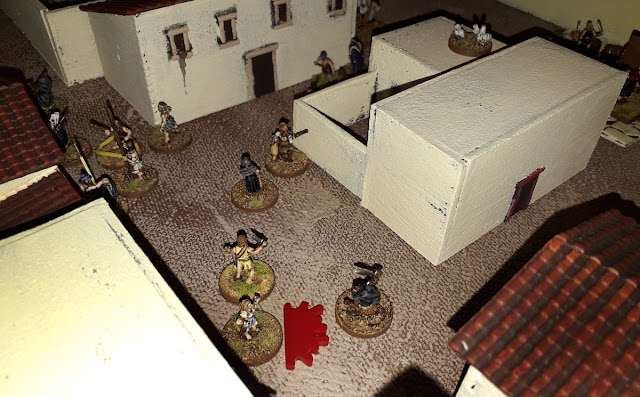 Just then, Iamblichos the assassin came back round into the main alley in pursuit of Europa. His swing failed to kill the apprentice, but the poison on his blade did enter her body, reducing her quality. 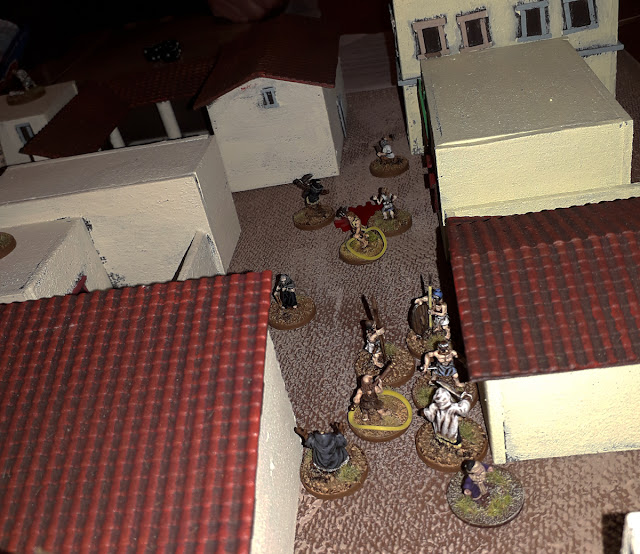 Seeing the Skenitai assassin attacking a wee girl, another concerned citizen decided that enough was enough and took up arms to aid the Fishmongers. The Fishmonger leader, Strato, strode up to the fallen Bargates and tried to stomp on the fallen Skenitai's head. Somehow he missed, and Bargates managed to rise to his feet. In one well aimed blow, he deprived Strato of his head. The Fishmongers panicked, almost to a man they started to withdraw, but were not yet finished. That was until the Skenitai archer took his only effective shot of the game, pinning a citizen right between the shoulder blades as he ran off down the alley.

At that point, the body count reached seven and triggered the end of the game. The local militia were summoned to restore order to the streets, and all faction members made themselves scarce. At the end of the game, my Skenitai had managed a measly two victory points for casualties inflicted on my opponents; Andrew's Palmyrenes had also scored poorly with two points, minus one for the civilian I killed at the end. Lee's Fishmongers only managed three points in total which, poor though it was, was enough to grant him a nominal victory.