Second game of Men of Bronze 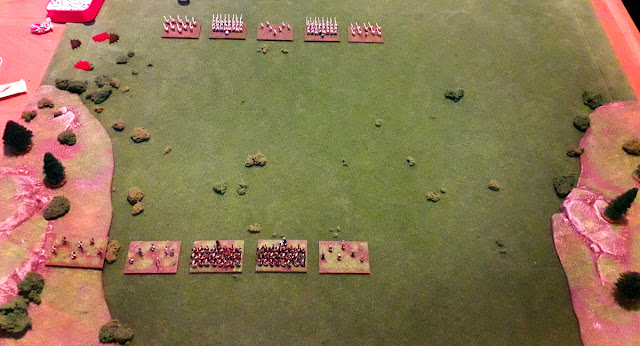 After a wee cup o' tea and a chat, we sat down for our second game of Men of Bronze. Amending our units of measurements from the previous game, we agreed that 1BW = 1cm (effectively halving the distances from last time). 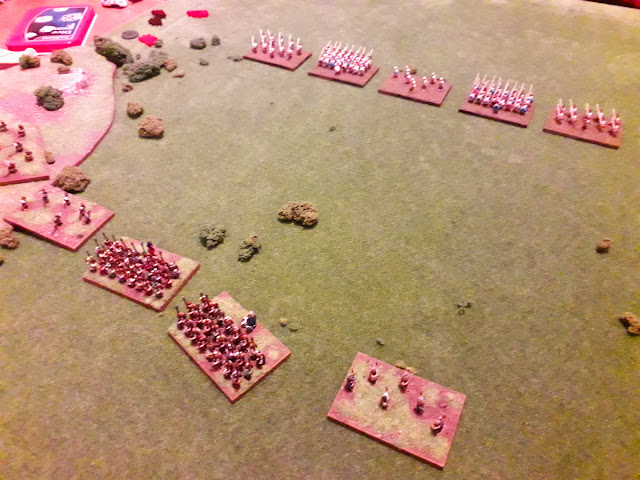 Again, the first few turns were all about moving in the general direction of the enemy. While I tried to make use of the rough terrain on my left... 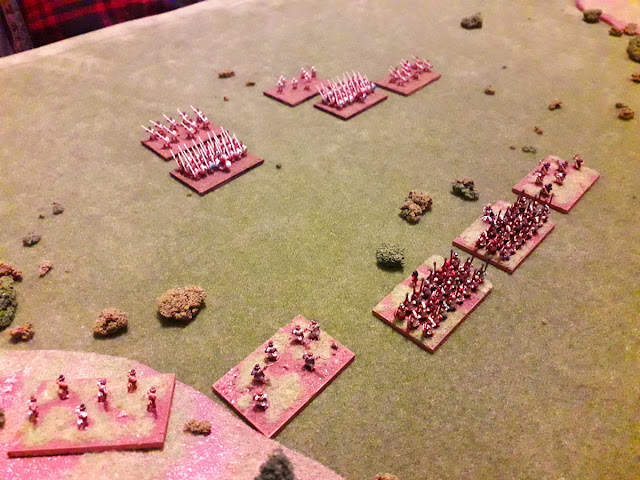 ... Leeandros pulled his peltasts back out of range, seeking shelter behind the phalanxes. In general, I think we both agreed that the shorter movement rates (1cm BWs) meant that the units stuck closer together and looked more like an ancient army rather than a selection of units thrown together (as we found last game). 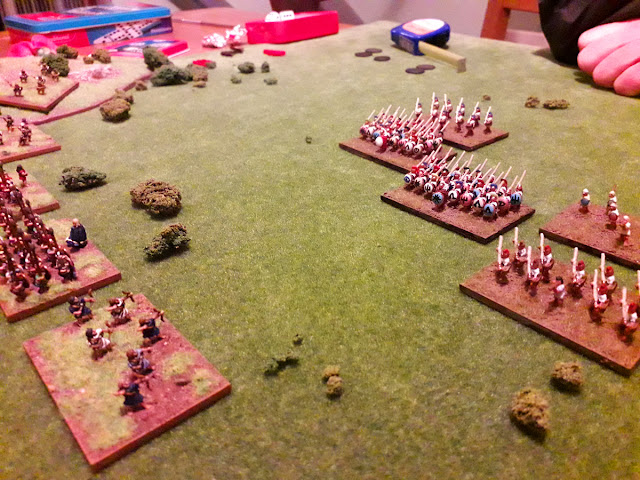 At this point I was beginning to feel that Leeandros was concentrating his strength at one end of m line. My slingers were snarling from the rough hill slopes, but weren't sure they wanted to come down off the hill into the open plain. 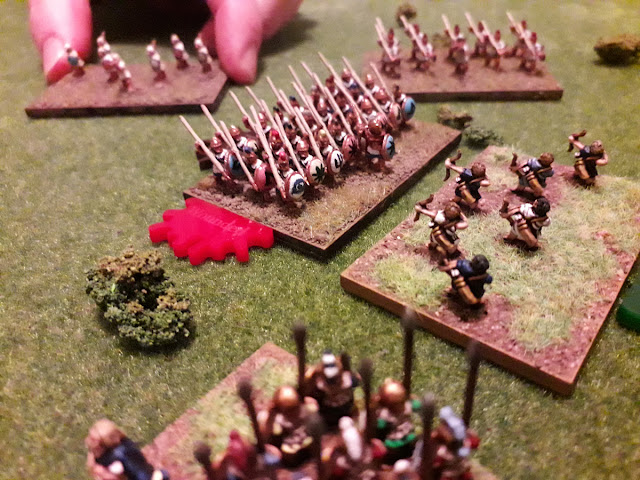 The most beautiful game mechanic moment of the battle then unfurled before us as Leeandros ordered his left-most hoplite phalanx to charge my archers. As there is no pre-measurement allowed in the game, he sent them forward only to discover that they didn't have the movement. The hoplites stumbled to a confused halt just short of the archers, breaking into open order and becoming disordered. My archers unleashed a volley at point-blank range, causing the hoplites to lose a point of courage. 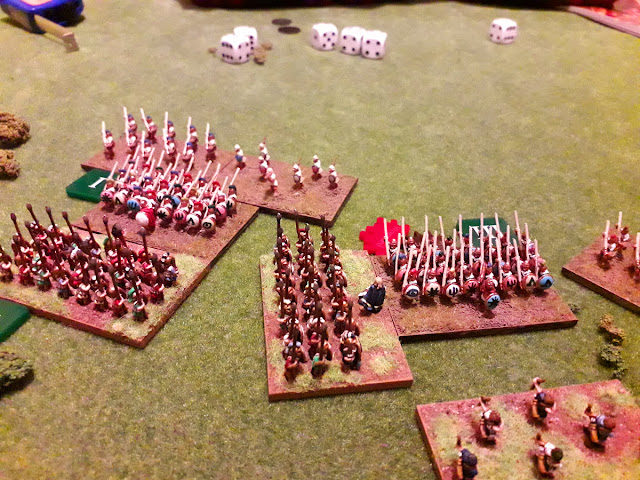 At that moment, I broke my right-most hoplites into open order swung to the right, ordered them back into phalanx formation and charged the wavering Corinthians. My other hoplite unit also charged forward, straight into the other unit of Corinthain hoplites. Lee chose to bring in two neighbouring units (peltasts and slingers) as supports. Initially we sort of smudged them both in behind the Corinthian hoplites, only later forming them 'properly' into an outlandish looking column (below). 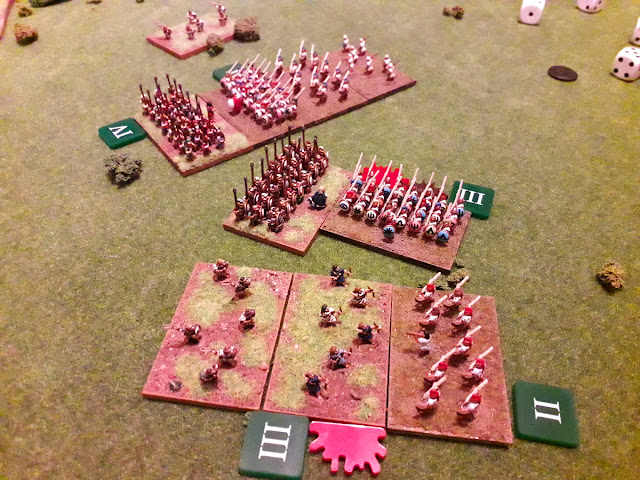 I brought one unit of slingers up behind my archers ready to provide some support as I expected to be charged by the last unit of Corinthian peltasts. Then, unsurprisingly, my archers were charged by some Corinthian peltasts. In the melees of that turn, the archers took a beating, the wavering Corinthian hoplites continued to suffer from the Macedonians attacking their flank, while my other hoplites lost some more courage from the onslaught of the Corinthian column. 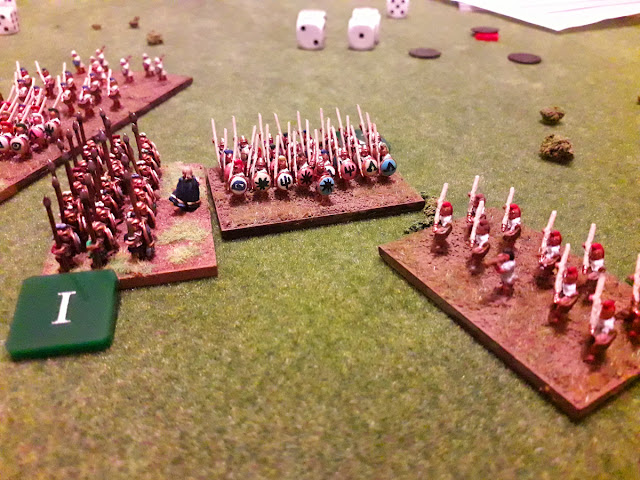 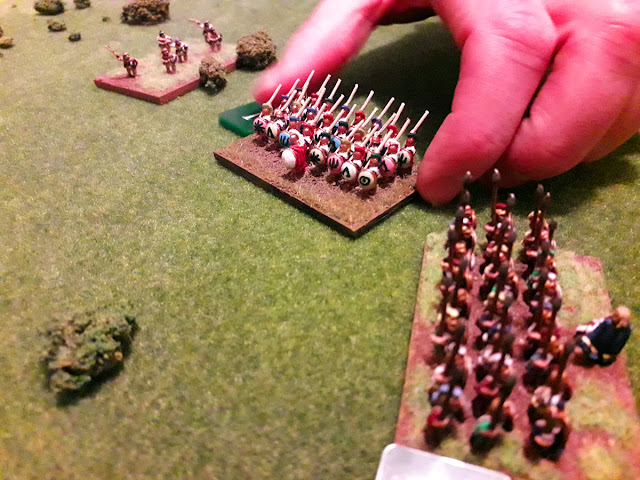 The only Corinthian unit which remained in the field was the drilled hoplites. They broke into open order, turned, and charged (in open order) at the Macedonian slingers... 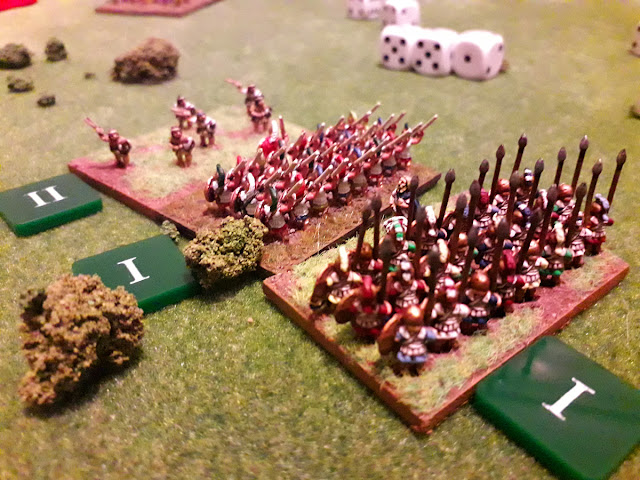 Two games down, the rules are enjoyable, but still a bit of a mixed bag for me. The basic tenants are great. The arete points system is an elegant way of adding friction, and the combat system really is very good. Shorter 'base widths' as a unit of measurement made for a better game than last time. However, the Warhammeresque double-movement-charge-range makes missile weapons pretty obsolete (maybe a regular movement distance charge move would solve that?). More of an issue is that the combat 'support' system just doesn't work for me. I'm not sure what the rational is behind it, but it doesn't feel like it reflects what we know of hoplite/ancient warfare...

Email ThisBlogThis!Share to TwitterShare to FacebookShare to Pinterest
Labels: Classical